Among the outstanding figures of 20th-century Ukrainian culture Maria Prymachenko (1909-97), the Honoured Artist of Ukraine and winner of the Shevchenko National Prize, occupies one of the highest places. Her name belongs to the line of outstanding artists of naïve art, such as Henri Rousseau, Niko Pirosmanishvili, Ivan Generalic and Nykyfor Drovniak.

Maria Prymachenko devoted nearly 60 years to her beloved occupation, painting. Her works are spread among Ukrainian museums and private collections. The largest part of her legacy, nearly 650 works, dating from 1936 to 1987, is kept in the collection of the National Museum of Ukrainian Folk Applied Art in Kyiv. 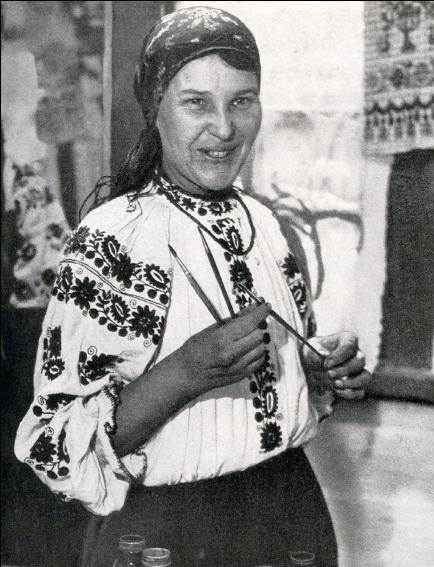 Maria Prymachenko was born in the Kyiv region into a peasant family. In her childhood she suffered from polio, which left her an invalid for the rest of her life. But this severe illness did not break her spirit. Having learned embroidery from her mother during childhood, in the late 1920s and early 1930s the future artist started to work in the Ivankiv Co-operative Embroidery Association, where she brought her own interpretation to traditional ornaments as well as creating her own artistic designs. The Kyivan artist Tetiana Floru saw Maria’s embroideries in the Ivankiv market, and in 1935 invited the talented girl to work in the Central Experimental Workshop of the Kyiv Museum of Ukrainian Art. Here folk artists from the whole of Ukraine were assembled together for the preparation of the First Republican Folk Art Exhibition, which took place in Kyiv in 1936 (photo of Maria Prymachenko from 1936 above), and was later shown in Moscow and Leningrad. In 1937 some of Prymachenko’s drawings were presented in the International Exhibition in Paris. 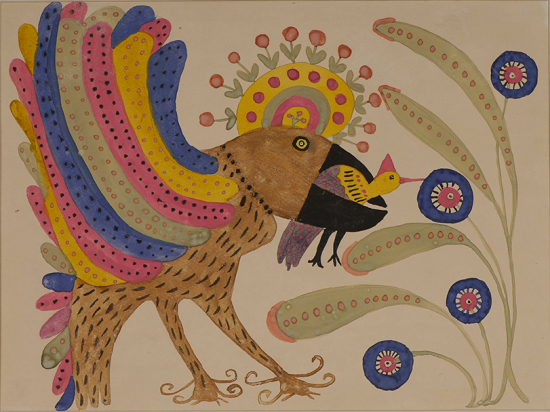 From the start Maria Prymachenko showed herself to be an artist with a unique world view. In the creation of artistic images in her drawings from the 1930s a decisive role was played by line and by the principles of traditional Ukrainian ornaments, presenting flowers, plants and animals in two-dimensional forms. 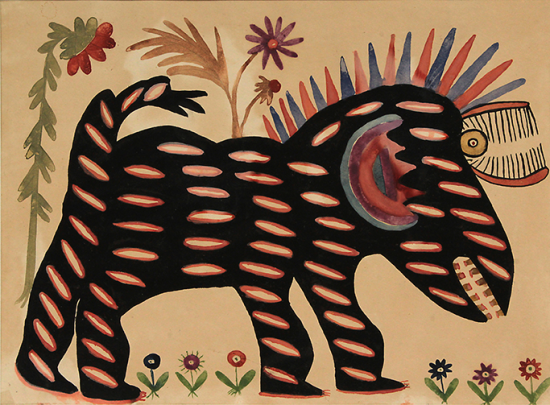 This period of Maria Prymachenko’s life was brightened by two important events: after several successful operations in Kyiv, she could stand on both legs – and in Kyiv she met her beloved fellow countryman, the Red Army lieutenant Vasyl' Marynchuk. After productive activity in the Workshop, she came home to her native village, Bolotnya. In March 1941 she gave birth to her son Fedir. A few months later Ukraine was occupied by the Nazis. The artist experienced all the horrors of war: her brother Ivan was shot by the Germans, and later her husband also perished. The hard war years were exchanged for post-war poverty, constant work on a collective farm, and bringing up her son. She had neither the time nor the strength for painting. But her intensive artistic energy constantly sought realisation. At the beginning Maria embroidered a lot, and later took up painting again,predominantly small compositions with animals, birds and landscapes on leaves from school sketchbooks.

With time the format of her paintings increased. The white backgrounds of the 1930s works gave place to coloured ones in the 1960s-1980s. At the same time her technique changed: from the transparent watercolours with clear graphic contours of her early works to thick intensive gouache, which gave birth to wonderful full-toned depths of colour. But the world of her images remained unchanged, as well as the virtuosity of line and colour. 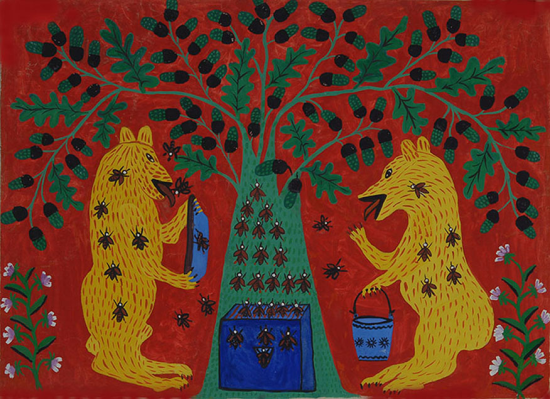 Flowers had a special place in her artistic heritage. Bright, decorative, unusual in shape and colour, they rose to the rank of the miraculous, and joined the aesthetic-philosophical interpretation of relations between human beings and the universe. 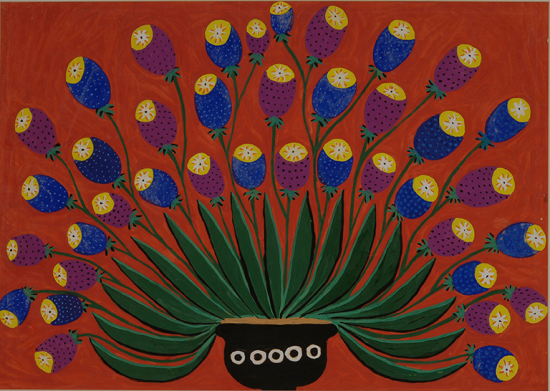 Images of birds, which for centuries have personified goodness, love, peace, and represent intermediaries between heaven and earth, occupy a significant place in her numerous compositions. Decorative pictures with images of animals and fantastic creatures are a quintessential part of Prymachenko’s art. She impresses us by her talent for the creation of new unique images. Many critics noticed her specific 'philosophy of the good’, which she embodies in images of ‘kind’ beasts and birds (lions, hares, bulls, horses, storks, swallows etc.). In the 1970s an important innovation appeared – on the backs of her drawings she wrote captions, a kind of explanatory proverbs, organically linked to the images. 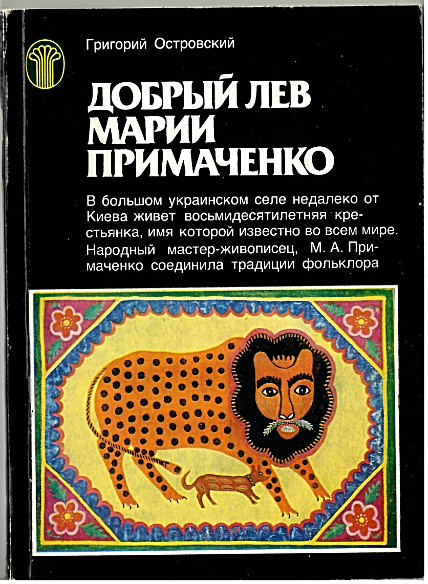 Many articles and albums with reproductions of her works were published, exhibitions held, films were made, coins and postage stamps issued in the independent Ukraine. The magic world of Maria Prymachenko continues to capture the imagination. 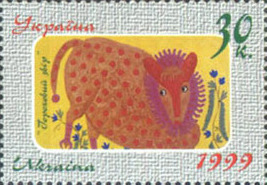 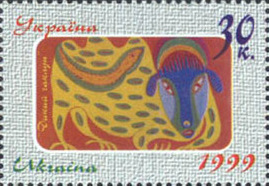