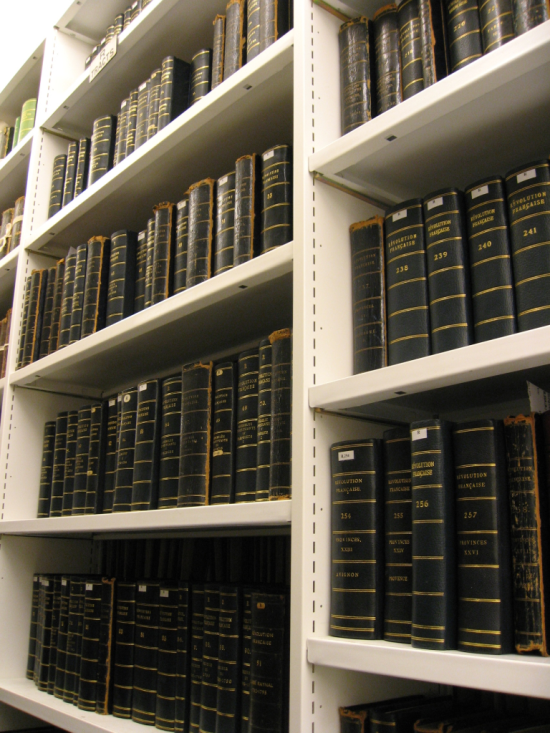 The world of print changed dramatically during and after the French Revolution and the development of the Press reflected the vivacity of the political debates, contributing to the emergence of a public opinion. In the Library’s collections, the Journal de Marseille complements accounts of the revolutionary events which happened in Marseilles and the South of France, printed either in Paris or locally. It can be read alongside other periodicals, such as the Bulletin des Marseillois (R.522.(3)),  the Journal du Département du Var (R.523.(7)),  the Journal de Lyon (F.1074) or the Journal de Bordeaux (R.521.(25)), as well as the Jacobin Journal des débats de la Société des Amis de la Constitution (F.89*-96*). 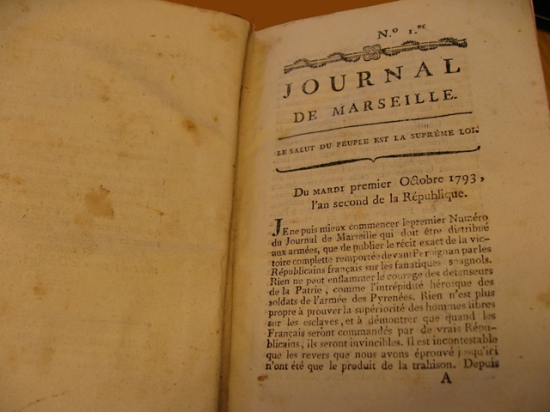 Marseilles was a key city during the French Revolution (it gave its name to the revolutionary national anthem). The Journal de Marseille et des départemens méridionaux shows how debates within the revolutionary movement added to tensions between royalists and republicans. It was published three times a week (Sunday, Wednesday, Friday) between October 1793 and February 1794 by the Club des Jacobins de Marseille, a local branch of this left-wing society which included members of rival political factions, the Girondins and the Mountain. The Mountain, led by Maximilien Robespierre, and supported by the most militant members of the Club des Jacobins de Marseilles, held radical views which led to extremism and the Reign of Terror in the years 1793-1794. They brutally expelled the Girondins from the National Convention in the summer of 1793, an event which fostered rebellions, especially in the South, where the Girondins, who promoted federalism, were very influential. 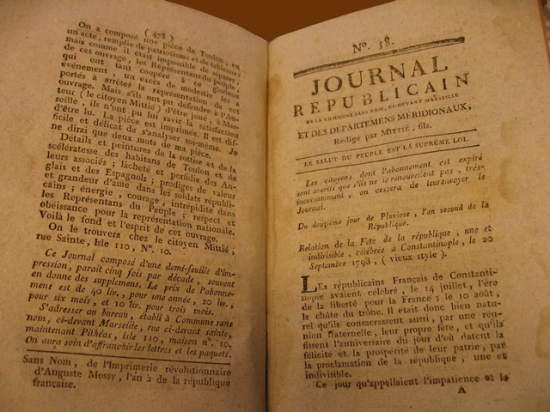 The Convention sent troops against the Marseilles insurgents: they took control of the city on 25 August 1793 and set up a Republican tribunal. The city was then deprived of its name and temporarily re-baptised “la Ville sans nom”: from issue 52 onwards, the name of the periodical thus changes to Journal républicain de la Commune sans nom et des départemens méridionaux. 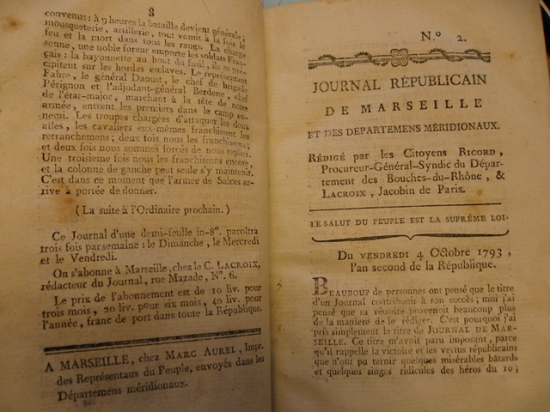 The Journal was thus at the centre of burning political interests. Its initial editors were Alexandre Ricord (1770-1829) and Sébastien Brumeaux de Lacroix (b. 1768). Ricord was general prosecutor of the Bouches-du-Rhône department and between March 1792 and May 1793 had co-edited the Journal des départemens méridionaux et des débats des amis de la Constitution de Marseille  (whose publication was interrupted by the federalist movement in Marseilles) and issues 2 to 8 of the Journal de Marseille. Lacroix, “jacobin de Paris”, was sent to Marseilles as a delegate appointed by the Convention, and took the sole editorship of the periodical from issue 9 onwards. 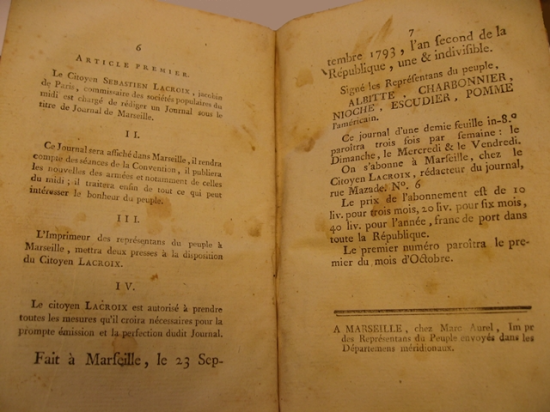 The Journal results from an initiative of the Convention delegates for southern French departments: it was designed to “remedy the vagaries of public opinion, its lack of instruction and enlightenment” and “purge the public spirit from the venom distilled by enemies of the Motherland, coward federalists”, given the difficulties in disseminating Paris journals. It is conceived as the voice of “the Nation, responsible for providing moral food for the people and enlightening it on its interests, rights and duties”. It gives accounts of the Convention’s meetings and discussions. 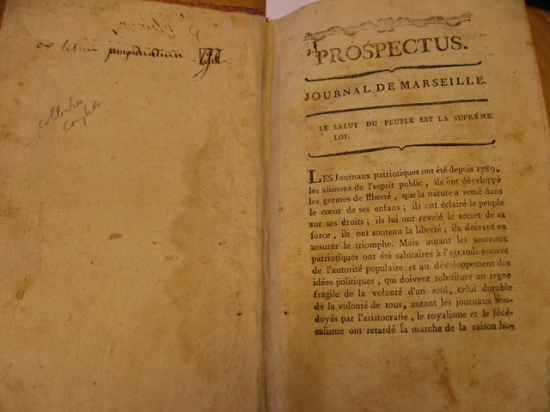 The political dimension of the Journal de Marseille is clear from the start, its Prospectus starting with the motto “Le salut du peuple est la suprême loi”, and a declaration praising the “journaux patriotiques” which since 1789 have enlightened the people and promoted Freedom, supporting the durable Rule of All rather than One. The periodical places itself against publications “paid for by aristocrats, royalists and federalists”, accused of “delaying the progress of human reason”. In ominous terms, the editor vows to “track traitors in their cellars and attics, to unmask the looters of the Nation, to denounce to the jury of the public opinion unfaithful administrators, conspiring generals, and delegates of the people”, including “members of the Mountain, the Marsh or the Plain, federalists and their vile supporters.” Under the Reign of Terror, the Journal is openly conceived as the nexus of an “active and general surveillance, a beacon to illuminate federalist conspiracies.” It wants to inspire the people with “the strength so necessary in the fight between crime and virtue, freedom and slavery.” 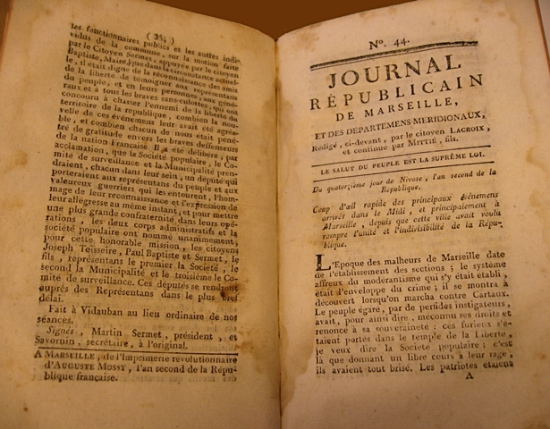 From issue 44 onwards, “Mittié fils” succeeded Lacroix as editor of the Journal de Marseille. Both names still appear on the first page until issue 55, when Mittié’s name remains. Jean-Corisandre Mittié, who was sent by the Comité de Salut public to Marseilles in 1794, authored dramatic works like La prise de Toulon, which features at the end of our volume. 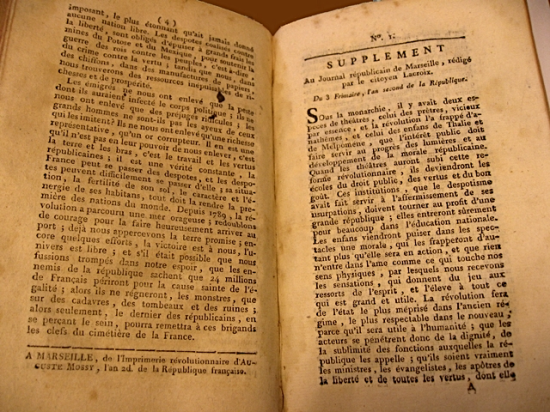 While the Prospectus and first eight issues of the Journal were published by Marc Aurel, “printer of the people’s representatives sent to the southern departments”, later issues were printed by Auguste Mossy, a printer who played an important role in Marseilles politics under the Revolution and the First Empire. Auguste came from a family of Marseilles printers: he worked, alongside his brother Jean (1758-1835), in their father’s printing shop before opening his own press.

The copy of the Journal de Marseille acquired by the British Library is kept in a modest but original brown leather binding with parchment corners and paste paper sides. It is stained, but traces of important use attest to the interest the collection has raised. Indeed, additional revolutionary tracts with a strong southern anchorage, including several pamphlets printed by the Mossy presses, are collected at the end of the volume – they will be the subject of another blog post!