Each generation of children has its own favourite book which defines their childhood. For children growing up in Poland in the 1950s and 60s it was a book about a school for wizards called Akademia pana Kleksa (‘Mr Inkblot’s Academy’) by Jan Brzechwa, first published in 1946. 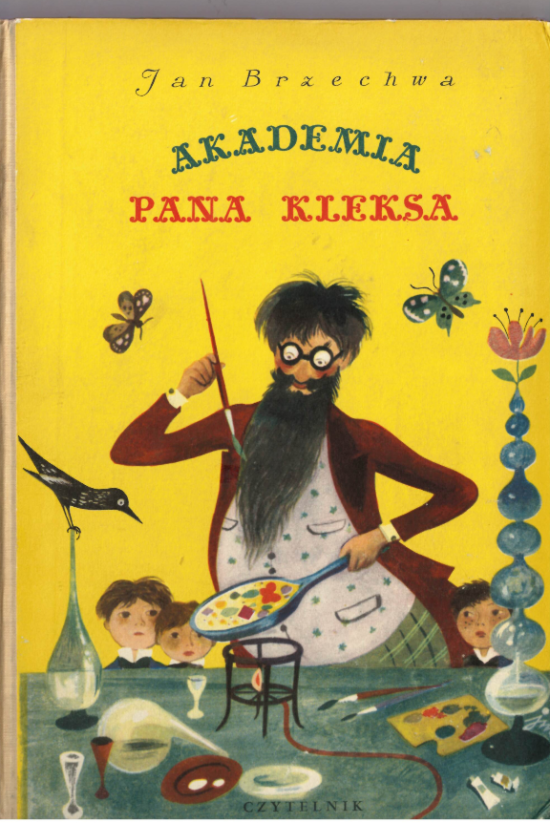 The book tells the story of incomparable eccentric Ambroży Kleks (Ambrose Inkblot), headmaster of an equally nonpareil school for wizards based in Fairylandia at the very end of Chocolate Street. Fairylandia lies not far off but is not that easy to find unless one is invited and guided there, just as one day an unhappy, bullied 12-year-old boy, Adaś Niezgódka (Adam Contrary), is by a learned blackbird which communicates words by dropping their first syllables. 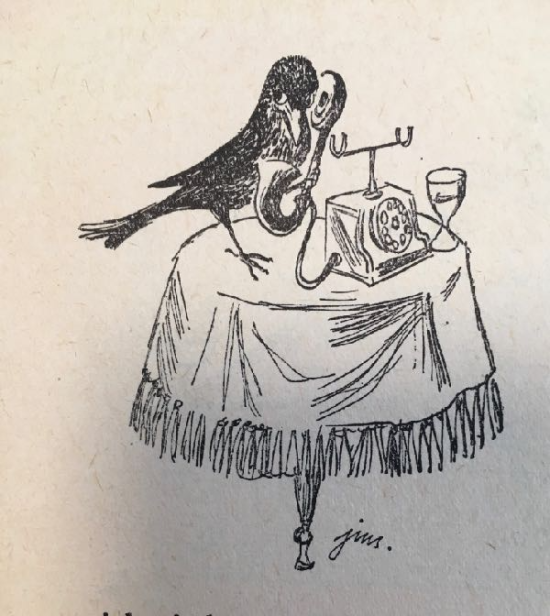 Mathew the blackbird on the phone

The school is a three-storey building with classrooms, refectory and dormitories, and the top floor, to which there are no stairs, housing all Mr Inkblot’s secrets. It stands in the middle of a large unkempt park, surrounded by a wall lined with iron gates leading to other fables. Nobody knows how many of these gates there are, but all are locked with silver locks, and Mr Inkblot keeps the keys in a silver casket.

The 24 boys in the school – all of whose names begin with A – are taught by Mr Inkblot the subtle art of wizardry in subjects ranging from inkblotography and letter-spinning to un-breaking broken things. Mr Inkblot also helps the boys improve their dreams by selecting the best of them from dream-reflecting mirrors at each boy’s bedside: He also cooks for them: brightly-coloured beads which turn to delicious soups and juices, but also huge roasts, prepared with the help of a magnifying pump. But he can cook anything a boy can fancy by painting the dish with his magic brush. He himself gets by on hair-growing pills but loves flavoursome colours and for elevenses treats himself to a handful of butterflies, a special kind which he plants and grows like beans. Mr Inkblot, who knows and sees everything, is the epitome of goodness and always tries to make everyone happy with themselves. He is a tall man, though he can control his size with the magnifying pump, making himself teeny-weeny for going to bed. He has a mop of hair gleaming with all colours of the rainbow and a vast bushy beard as black as soot. He wears an old-fashioned velvet frock coat with a lemon-bright waistcoat full of pockets, the contents of which could easily fill three rooms. 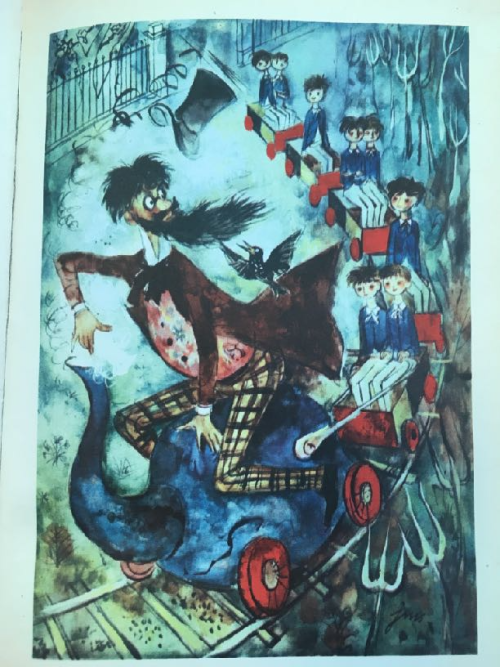 Mr Inkblot taking his pupils on a school expedition

Jan Brzechwa, started writing Mr Inkblot’s Academy in 1944, when war was still raging outside the window of his Warsaw flat. As a Jew he was hiding on the ‘Aryan’ side, somewhat contrarily, by not hiding at all and trying to live a ‘normal’ life. Writing was for him a way to escape the horrors of war by sticking to what he was good at: writing children’s stories and rhymes. He was an acknowledged master of the art.

Yet the horrors seeped into the narrative, most vividly in the story of Alojzy Bąbel (Alois Blister), a boy-marionette brought to Mr Inkblot for schooling by Philip the barber, Mr Inkblot’s nemesis. Mr Inkblot brings Alois to life but the boy grows wickeder and wickeder, spewing hate and destruction, until he has to be dismantled. This enrages Philip, who steals Mr Inkblot’s secrets, sending him and his Academy on a course to total annihilation. Not surprisingly, given the circumstances surrounding the creation of Mr Inkblot’s Academy, Brzechwa originally named the wicked boy Adolf, but, wanting to protect the innocence of his young readers, or just driven by his wicked sense of humour, changed the name to that of Hitler’s father, thus neatly blaming it all on the parents. 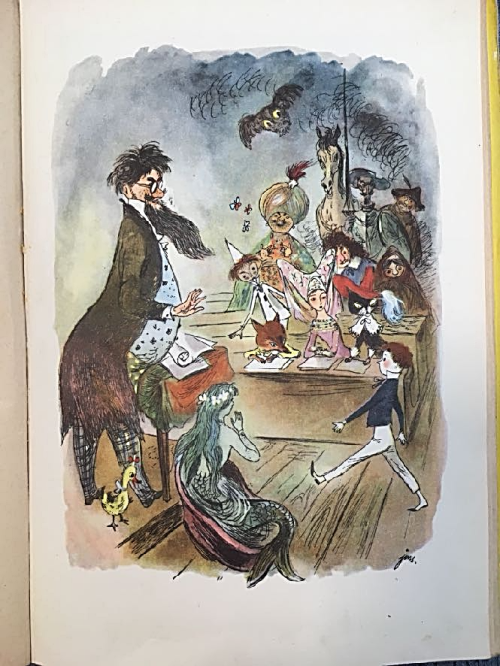 The character of Mr Inkblot also had his real-life counterpart. Franz Fiszer was a real character, legendary in the literary circles of pre-war Warsaw. A Socrates and a Falstaff, a practicing metaphysician and the last of true alchemists, if by such we mean not quack-chemists but serious searchers for the philosopher’s stone, Fiszer dined and drank during legendary symposia, which convened spontaneously wherever he sat at a table. It would be an inconsolable waste if Franz Fiszer were to recede into oblivion without a trace. Luckily for him his memory has not been totally blotted out – he transmogrified into Mr Inkblot. Thanks to Jan Marcin Szancer – another Polish Jew hiding in occupied Warsaw, who created Mr Inkblot’s definitive image much as E.H. Shepard did for Winnie-the-Pooh – Fiszer/Mr Inkblot became a great friend to generations of Polish children. 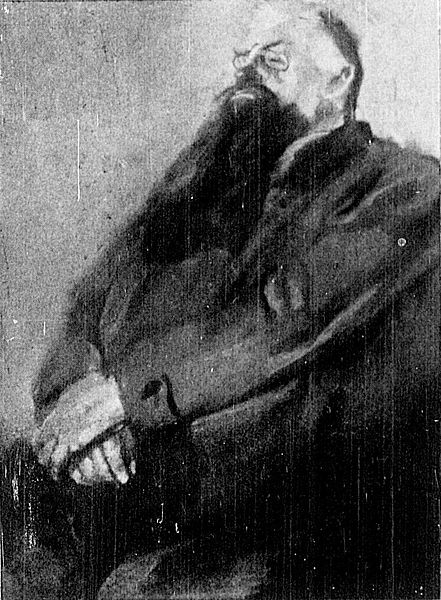 Mr Inkblot’s Academy was the first of a trilogy, followed by Mr Inkblot’s Travels and ending with Mr Inkblot’s Triumph, which rounds up the story with Adam’s graduation from the Academy and his last journey with Mr Inkblot in search of the disappeared tribe of Fairytalers (and his own parents). It all ends well – despite continued machinations by Alois Blister – with Adam’s engagement to a lovely girl named Reseda. 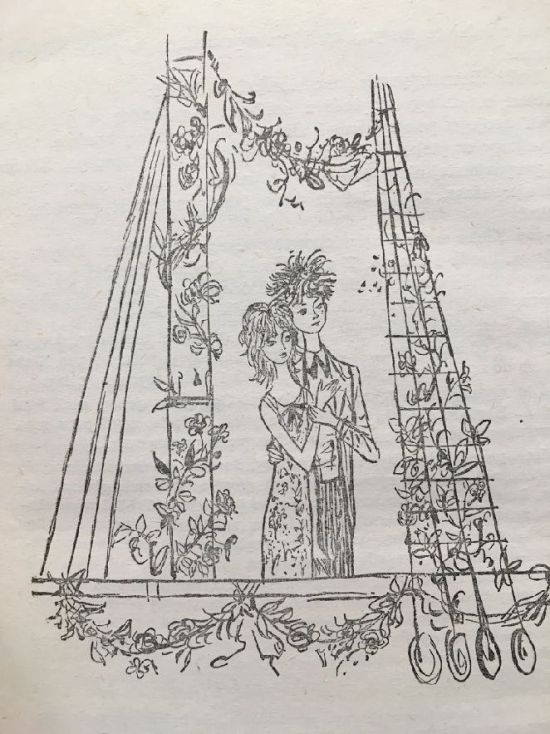 The books’ enduring promise of escape, renewed interest in Mr Inkblot and his academy when Poland was drowning in the greyness of the martial law imposed in 1981. Three films made in the 1980s relaunched the imperishable Mr Inkblot’s career and brightened the years of yet another generation of Polish children, and perhaps not just Polish, as the films were shown on European television well into the 1990s. One can only wonder why Mr Inkblot’s Academy’s film potential was discovered so late. Brzechwa himself wrote film scripts, among them an adaptation of another classic, The Two who Stole the Moon, the horrid twins of the title played by Kaczyński brothers, later president and prime minister of Poland. Sadly, an earlier project of turning Mr Inkblot’s Academy into a Hollywood film came to nothing, even though it was scripted by Erika Mann, daughter of Thomas. Although her treatment was the first English version of Mr Inkblot’s Academy, and can be read online via the website of the Münchener Stadtbibliothek, there has never been a published translation – a challenge perhaps for a publisher today?