50 years ago today a new era began in Italy. Students joined the global wave of dissent, protesting against the bourgeois value system, fighting for equality and civil rights, and requesting a modernisation of the education system in the country.
‘La contestazione’ started in Rome, on Friday 1 March 1968. The School of Architecture of the University of Rome, in Via di Valle Giulia, became the battlefield for the first violent encounter in Italy between the student movement and the police. 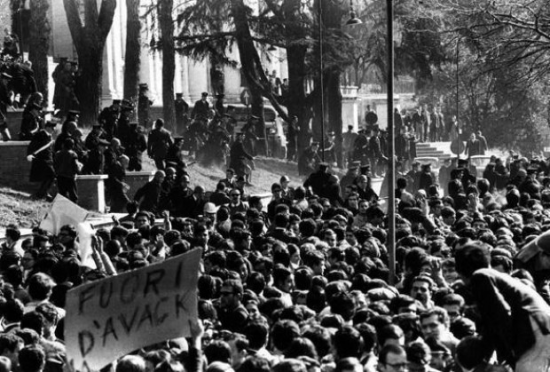 Some accounts of the participants have been recorded about that day, which was described as ‘a collective initiation’.
In the words of Oreste Scalzone, a student at the time, who later became a politician:

Freedom was the morning of Valle Giulia. They [the police officers] had seized the school of Architecture […]. The night before, discussing the protest at a university committee meeting, we decided that we would go to get it back. We woke up early and we went [… ]. We arrived by the green esplanade and started throwing eggs at the police, who seemed all wrapped up, unprepared, because they were used to repressing protests without expecting any form of resistance. When they charged, we didn’t run away. We withdrew and then counterattacked [our] stones against [their] tear gas grenades […] (quoted by Nanni Balestrini in L’Orda d’Oro (Milan, 1997; YA.2001.a.31572); own translation). 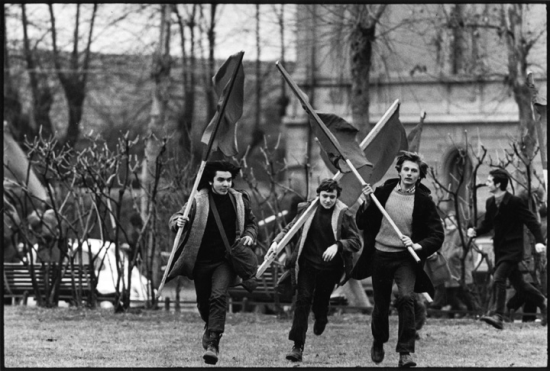 Among the students and the police officers involved, many then had careers in journalism (Giuliano Ferrara, Paolo Liguori, Ernesto Galli della Loggia), others in politics (Aldo Brandirali, and the above-mentioned Oreste Scalzone), others in the arts, like the actor Michele Placido, the architect Massimiliano Fuksas and the songwriter and director Paolo Pietrangeli, who wrote a song called ‘Valle Giulia’ to celebrate that, suddenly, on that day a new thing happened: ‘non siam scappati piu’ (‘we didn’t run away any more’). The song quickly became the iconic anthem of the protest: ‘No alla scuola dei padroni! Via il governo, dimissioni!’  (‘Down with the bosses’ schools, out with the government, resignation now!’). 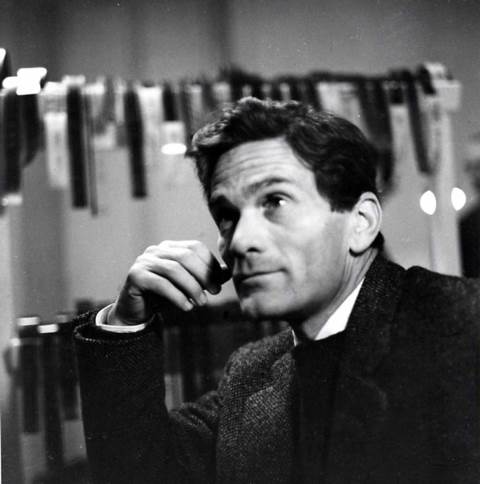 Pier Paolo Pasolini on the set of The Gospel According to St. Matthew. Picture from Wikimedia Commons

Pier Paolo Pasolini  famously wrote about the event. Some verses of his poem ‘Il PCI ai Giovani’ (‘The Italian Communist Party to the Young People’), written in the aftermath of the Battle of Valle Giulia, have been quoted for decades to state that Pasolini was supporting the police:

But if one reads the full poem, it becomes clear that the Pasolini uses his irony to provoke the students, urging them to abandon their bourgeois rebellion, to take their fight under the wing of the Communist Party and closer to the workers because, in his idea, Communism was the only way to make a revolution happen.

Wu Ming 1, The Police vs. Pasolini, Pasolini vs. The Police, translation from Italian by Ayan Meer