The Russian Love Affair with the Arabian Horse

The title does not refer to the mythical indiscretions of Catherine the Great, although she indeed kept a number of Arabian horses, but to the enthusiasm which many famous Russian equestrians and breeders have had for the type. 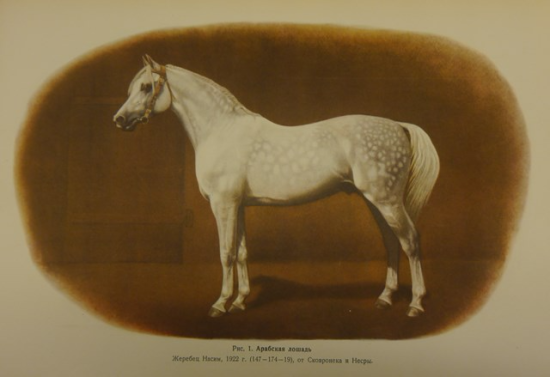 Among the British Library’s collections, one book in particular illustrates the aristocratic infatuation with the Arabian. Prince A. G. Shcherbatov and Count S. A. Stroganov’s Kniga ob Arabskoi Loshadi (Saint Petersburg, 1900; 7293.l.33.) combines an overview of the breed with an account of the authors’ journey to what is now Syria, purchasing stallions for breeding back in the Russian Empire. It was translated into English as The Arabian Horse: A Survey, which the Library also holds (London, 1989; YK.1990.b.3731). 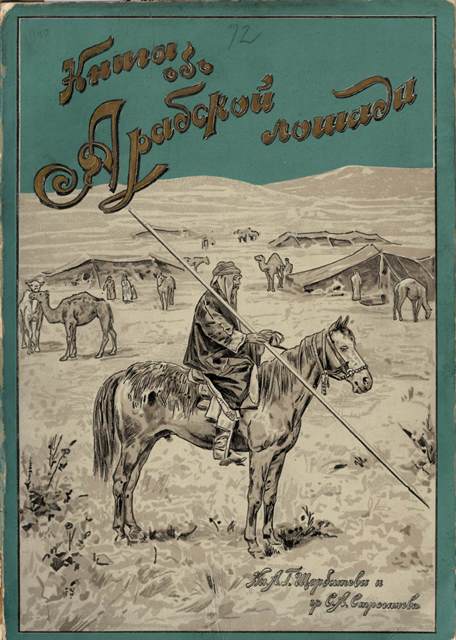 Above:  The lavish cover to Shcherbatov and Stroganov’s book. Below: A mare called Latifa, bought by Stroganov in Damascus in 1895. 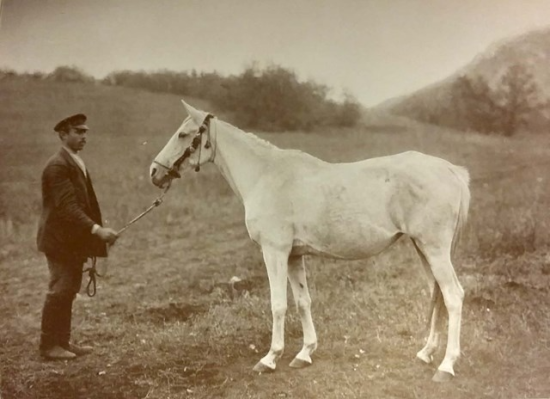 Shcherbatov and Stroganov championed the Arabian against the English Thoroughbred, another popular breed. They considered the Thoroughbred inferior, as it had emerged during a great confusion of equine bloodlines after the English Civil War. Cromwell’s revolution had led to the destruction of stud books and heavy loss of stallions – ‘it turned out to be impossible to reconstitute the pedigrees of the surviving animals’.

By contrast, Bedouin traditions ensured no confusion of bloodlines: ‘Our belief in the pure blood of the Arabian horse stems above all from the importance which the Arabs in horse-breeding attach to blood’. The purity of the Arabian appealed to principles close to the hearts of Russia’s ruling classes, who meticulously traced their own genealogies as well as those of their animals.

Shcherbatov and Stroganov argued that the increasing encroachment of the railway and the disruption of traditional Bedouin ways of life, such as the shift in warfare to the use of rifles from the back of camels rather than lances on horseback, brought the future of this unspoiled breed into question in its native homeland.

It fell to Russia to ensure the preservation of the Arabian’s pure bloodline, for Russia alone remained true to the aristocratic conception of an ideal purity of blood within a perceived sea of international vulgarity. In its turn, they thought, only the pure-blooded Arabian could help breed horses to out-compete the constitutional monarchies and democratic republics in equestrian sports and on the battlefield.

By 1900, the Arabian had already clearly proved its worth for improving the Empire’s stock. In the late 18th century, an Arabian stallion named Smetanka had been used as the basis for one of Russia’s best known breeds – the Orlov trotter. 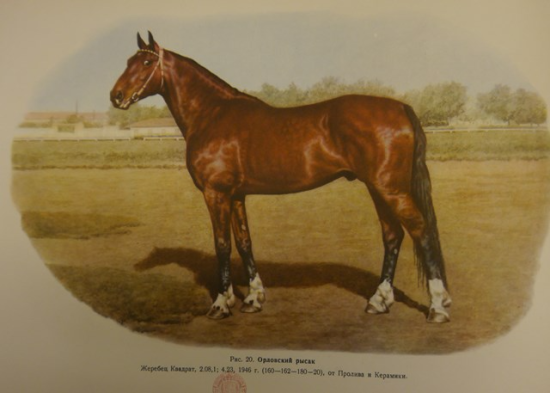 An Orlov trotter from the album of Soviet horses.

The project to develop a Russian trotting horse had been taken up by Count Alexei Grigoryevich Orlov-Chesmensky, in his retirement after an eventful military career. Orlov had been a central player during the 1762 coup which secured the throne for Catherine the Great, and was rumoured to have personally assassinated the deposed Tsar Peter III. Through his rigorous and experimental breeding programme, the Orlov trotter emerged as one of the leading horses for harness racing and other sporting disciplines of the 19th century. 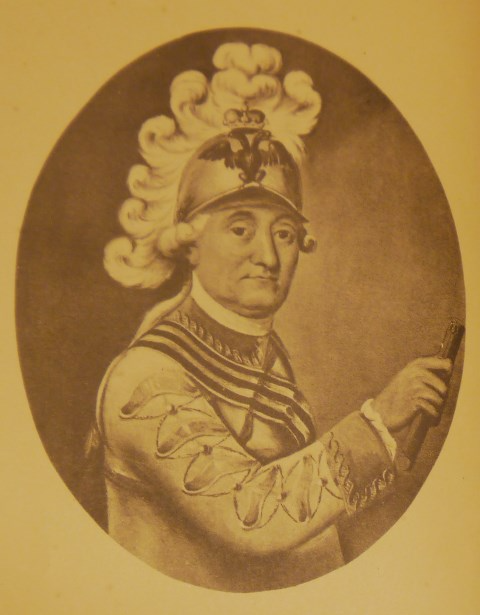 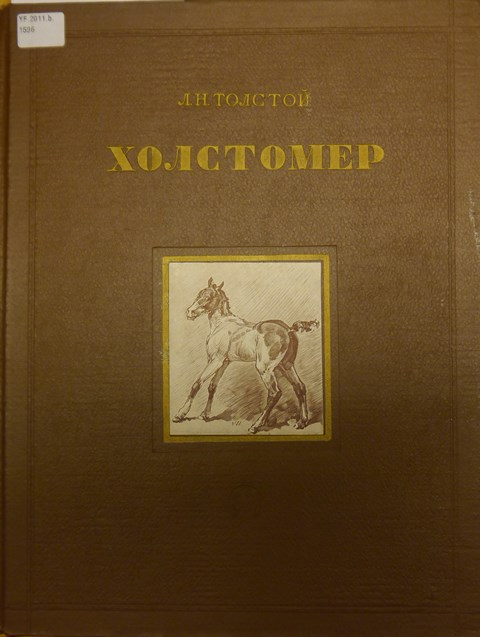 According to the coaching expert Andreas Nemitz, wealthy Russians typically used Orlov trotters as the centre of a troika to pull their droshkys, flanked by two gallopers. Captain M. H. Haynes, a British observer of Russia’s equine culture at the end of the 19th century, wrote that Orlov trotters ‘admirably suit the requirements of fashionable Russians, who love to go as fast as their coachmen can drive them, even over the roughest cobble stone pavement, which of course does not suit the long fetlocks’. 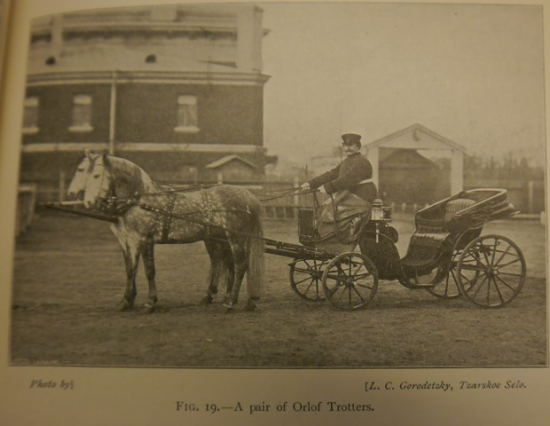 Russia’s Arabian and Orlov trotter populations declined sharply during the 20th century, harmed by the wars and social upheavals of this time. In 1997, enthusiasts founded the International Committee for the Protection of the Orlov Trotter to secure the future of the breed.

Despite the development of more competitive breeds since its heyday, the Orlov trotter is still well loved by enthusiasts and amateurs alike. As Sherbatov and Stroganov wrote in 1900: ‘One has only to glance at the Orlov-type trotters … to recognise immediately in the proudly-arched neck, the bright, prominent eye, the thin skin, the silky mane, the high-soaring tail and the overall nobility of their bearing, the Arabian blood infused only once, more than a century ago’. 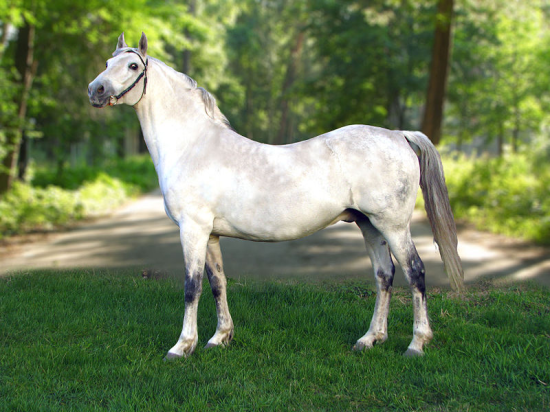 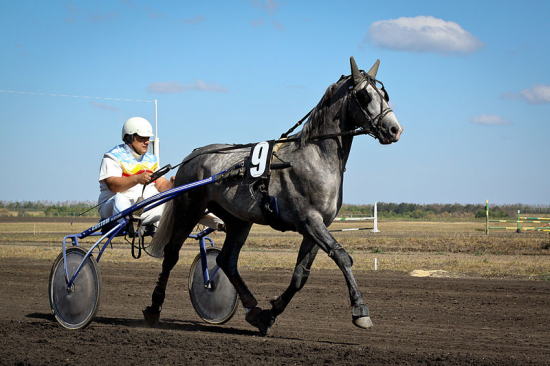