Travels to Montenegro in the 19th century: a collection of digitised books

In the 19th century Montenegro was one of the least known countries, formally part of European Turkey, but in reality an unconquerable country on the edge of its existence, which presented a constant challenge to the power of the Porte. The Ottoman Turks overran Montenegro with large armies several times, captured the capital Cetinje, burned the villages and crops, but the free mountain people were never subjugated and thus invaders paid dearly in losses for their conquests and retreats. Before its full independence in 1878, the Turkish authorities never recognised the facto autonomous status of Montenegro.

In a collection of 18 travel books in six languages (French, Russian, English, Serbian, Italian and Hungarian), published between 1820 and 1896 and recently digitised by the British Library, European visitors to Montenegro recorded a wealth of knowledge about the country and its people. 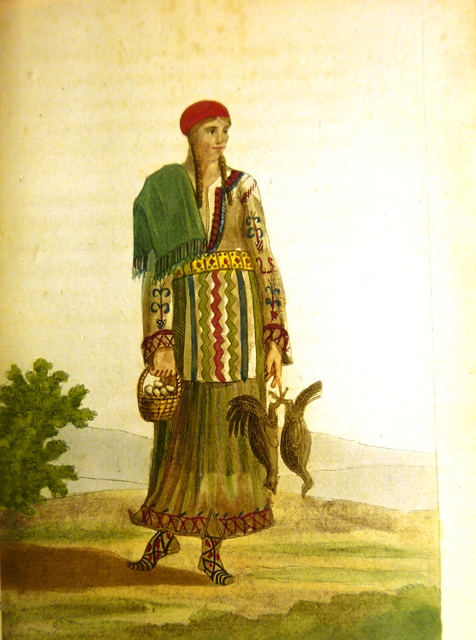 The travel accounts comprise history, topography, statistics and data on human and natural resources, maps and images of Montenegro. They describe the Montenegrins’ way of life and customs, their habits and character, religious ceremonies, superstitions and beliefs, skills, knowledge and ignorance in equal measure. These accounts provide useful insights into the everyday life of Montenegrins, their virtues and weaknesses and their moral values. The observers were equally interested in health and education, economy and trade, political relations, diplomacy and governance, legislation and consequently the life and development of the state of Montenegro. 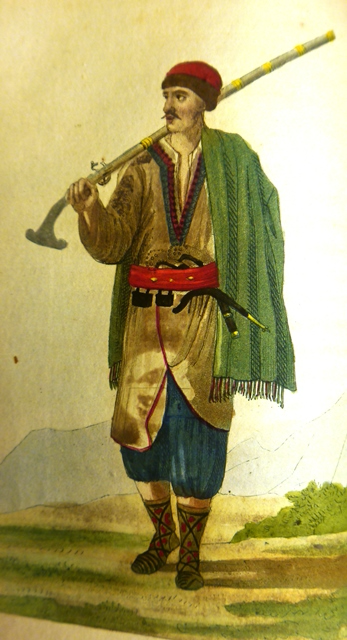 The Montenegrin man was depicted as a free man and warrior armed at all times with a gun and sabre (yatagan) and the usual ‘strucca’ (struka) over his shoulder, a cover made of canvas or animal skin which he used against the elements or as a sleeping pad. Every Montenegrin wore a moustache, had shaved beard and the fore part of the head, as far as the line of the ear. He wore folding red cap with black lining, a homemade suit of rough cloth, which was long and narrow with tight sleeves and knee-high wide trousers with woollen socks and leather moccasins (opanak). The Montenegrin woman wore colourfully embroidered shirts and decorated outfit with a scarf for married women or a red cap for girls. 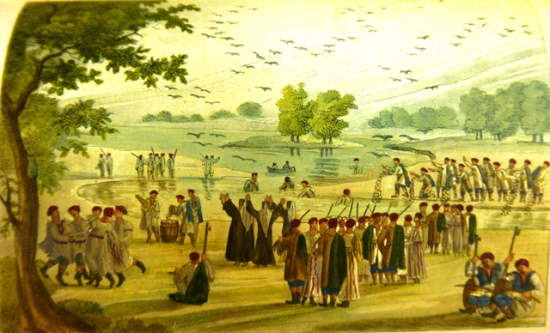 Fish was one of the most important products of Montenegro. Crnojević River (Rijeka Crnojevića) and Skadar Lake were abundant in quality freshwater fish. They were exported dried and salted to local markets and to Trieste, Venice and other places. Montenegro held a traditional fishing festival celebrated as a harvest holiday. This was a special occasion celebrated during fishing seasons in the presence of the Montenegrin ruler and dignitaries. 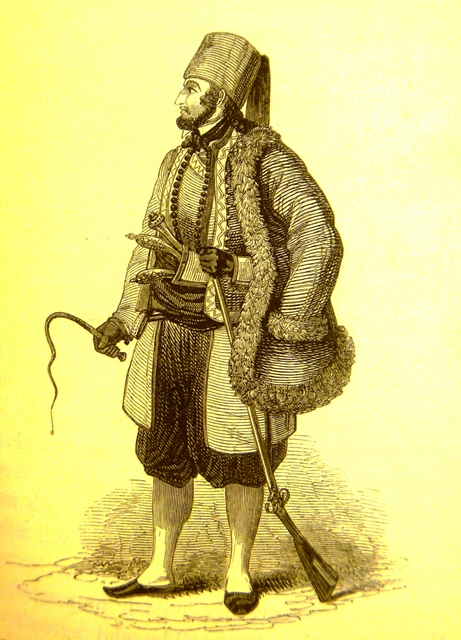 The title of Vladika was a popular term for the Orthodox Metropolitan of Montenegro who was the spiritual, political and military leader of a theocratic patriarchal country. Petar II Petrović Njegoš successfully continued his predecessor’s reforms of the national customs, government and institutions of Montenegro. He founded the first primary school in Montenegro and a small press for the printing of school and educational material. In this press Vladika Petar II printed his early collection of poetry Pustinjak cetinjski (‘Cetinje hermit’)  in 1834. 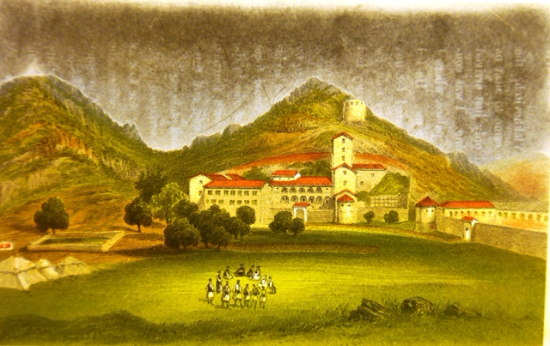 Cetinje monastery, destroyed and rebuilt several times until the mid-19th century, represented on its own the capital of Montenegro. Close to the monastery Vladika Petar II had his residence built (seen in this lithograph to the left of the monastery) which housed his private library and accommodated public administration. This was the beginning of the first town in Montenegro created at the foot of the high mountains which guarded the freedom and independence of this country. 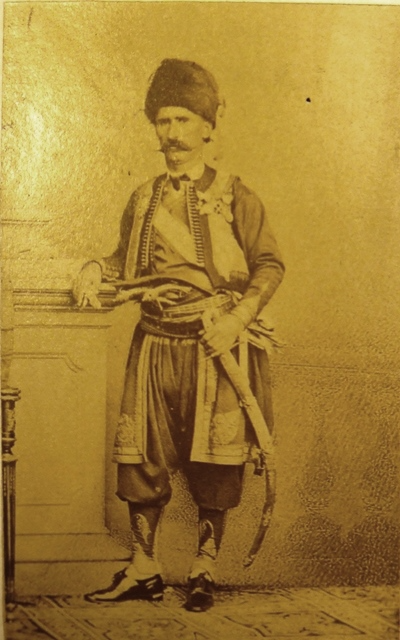 Vojvoda (Duke) Mirko Petrović, the father of Prince Nikola of Montenegro. From The Eastern Shores of the Adriatic in 1863

Vojvoda Mirko Petrović epitomises a Montenegrin freedom fighter.He was a hardened military commander who won important battles against the Ottoman forces. A photographic portrait of Vojvoda Mirko was taken in 1863 and he is described in The Eastern Shores of the Adriatic in 1863: “In person he is a remarkable-looking man: very small for a Montenegrine, thin and spare in figure, every line in the closely-shaven face expressing decision, and the small restless eye lighting up in conversation with such a fierce eagle’s glance, that one can fancy how wild and fiery it must be in war. His voice is peculiarly high-pitched and thin, unlike that of his countrymen in general, but when excited in the Senate he managed to give it a hoarse roar that astounded one’s ears.”

First-hand travel accounts were usually published to meet the curiosity of the officials and the public of countries with a political, military, commercial, cultural or general interest in far-away or lesser known countries. Their detailed descriptions and insights remain valuable for researchers today. It can be seen that travel writers were well informed and well acquainted with the existing literature about the subject of their interest. Some travelogues provide useful bibliographies that reveal the body knowledge available at the time of writing. They enable two-way communication with the past and our understanding of the world as it used to be and as it is now. Since 1995 the publishing house CID in Podgorica has specialised in publishing international travel literature about Montenegro in Serbian translation which is an important addition to the British Library collection.

Digitised books not cited in the text:

William F. Wingfield, A tour in Dalmatia, Albania, and Montenegro, with an historical sketch of the Republic of Ragusa (London, 1859) 10215.c.25. Available online from Books on Google.

Posted by Olga Kerziouk at 2:11 PM