Happy St George’s Day, everyone! Today England celebrates the feast of its patron saint, but the day is also celebrated in Portugal, Georgia, Russia, Bulgaria, Ethiopia, Palestine and some regions of Spain. In Catalonia, there are special events for what is known there as La Diada de Sant Jordi. Customs include giving presents of roses and books, so the streets today will be full of wonderful smells and colours!

The Catalan version of the Saint George legend recounts how the brave knight was willing to give his life to save a princess. The young girl had been selected by chance to be fed to a fearsome dragon besieging her small kingdom. The knight rescued her from the beast’s claws by killing it with his spear. 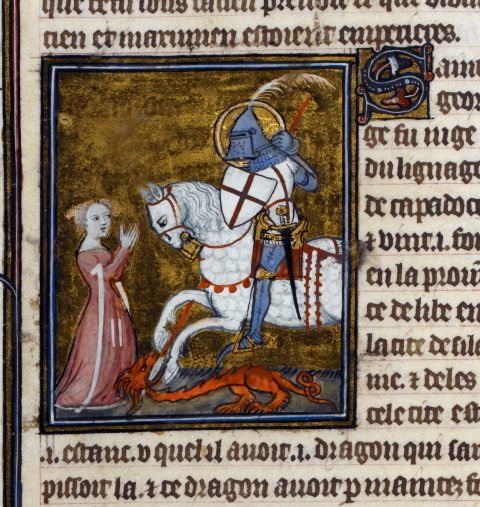 Detail of a miniature of George killing the dragon, with the princess kneeling, from the Legenda Aurea (Paris, 1382) MS Royal 19 B XVII, f. 109r

According to legend, when the drops of dragon’s blood fell on the ground, they turned into roses. The knight picked one, handed it to the princess, and together they lived happily ever after. The story also says that the rose re-blossoms with new energy every April, which helps explain why the festival to commemorate the knight’s deeds takes place in this month.

Ultimately, however, the legend of George slaying a dragon and rescuing an innocent maiden is a medieval addition to the story of a much older historical figure. The origins of the festival go back as far as 23 April 303 AD when the Romans beheaded a soldier named George who had previously led a battalion under the Roman Emperor Diocletian. His crime? Refusing to obey the Emperor’s orders to persecute Christians. His punishment was martyrdom.

The story of this Christian knight quickly attracted veneration, with a wide range of fantastic births and different legends attributed to the Saint, who was canonised in the 7th century. His cult gradually spread through the Catalan region until, in 1456, he was officially named the patron saint of Catalonia. 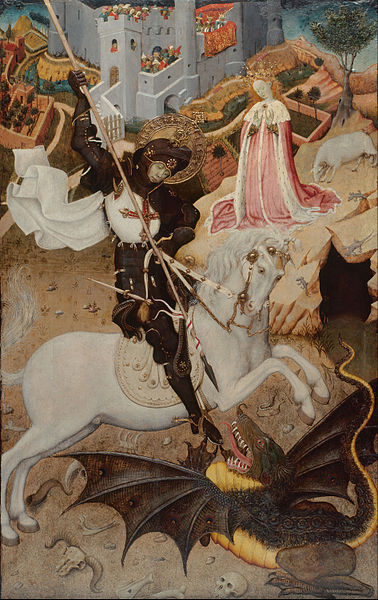 Sant Jordi celebrations in Catalonia can be traced back at least 300 years, with the Palau de la Generalitat in Barcelona already hosting a Rose Fair on the day by the 15th century. This mediaeval celebration was dedicated to weddings, betrothals and marriages, and custom dictated that a man should buy a red rose for his wife, as a symbol of his passion.

In 1456, the day became an official festival, but in the early 18th century, with the fall of the city of Barcelona and the ascension of the Bourbons to the Spanish throne, it began to lose its devotees. It was not until the end of the 19th century, with the Renaixença, that Sant Jordi’s day regained its strength and vitality to vindicate the historical and cultural heritage of Catalonia.

The revival of the day was consolidated at the beginning of the 20th century thanks to the Mancomunitat de Catalunya. At this time, an effort was made to revitalize Sant Jordi traditions, which not only appealed to feelings of patriotism and sentimentality, but also directly benefited the publishing sector, as we will see below. Under Franco’s regime, however, Catalonia’s Statute of Autonomy was annulled and Sant Jordi celebrations were prohibited. Nevertheless, following the death of the dictator, the day regained its characteristic festive brilliance. 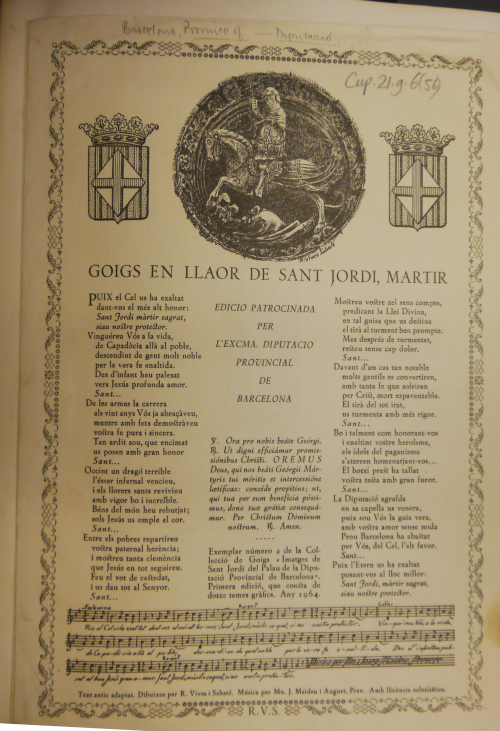 Goigs en llaor de Sant Jordi, martir (Vilanova i la Geltrú, 1964) Cup.21.g.6.(56.) A poem in praise of St George, adapted from an older source by Ricardo Vives i Sabaté with music by J. Maideu i Auguet

The festival’s original association with books dates back to the 1920s, when the director of the Cervantes publishing house, Valencian writer Vicent Clavel i Andrés, approached the Barcelona Official Chamber of Books and the Publishers and Booksellers Guild to organize a festival promoting books in Catalonia. The date chosen was October 7 1927.

When the International Exhibition was held in Barcelona in 1929 booksellers took it upon themselves to go out into the streets, setting up stands to display their new publications and encourage reading. Their efforts met with such success that they decided to establish an annual Book Day. However, they changed the date to 23 April to coincide with the anniversary of two great authors’ deaths: Cervantes and Shakespeare. 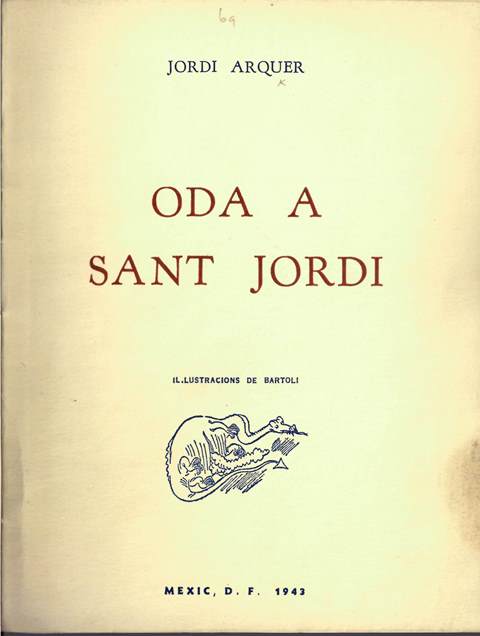 Above: Cover of Jordi Arquer, Oda a Sant Jordi (Mexico City, 1943), no. 233 of an edition of 500 copies. Below: opening with the author's signature and a memorial dedication to Shakespeare and Cervantes; the poem, published by Arquer in exile, was intended to mark 23 April. 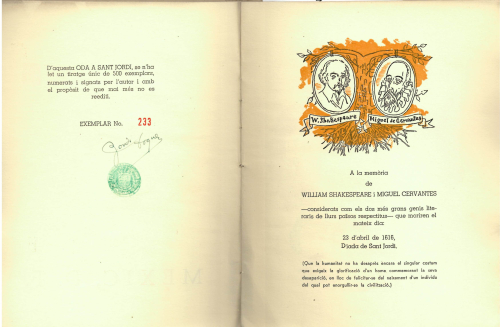 Since its first inception, the festival has brought energy to Catalan publishing and continues to provide great support for the sector today. It has had such a significant impact that in 1995 UNESCO’s General Assembly declared 23 April as World Book and Copyright Day.

Sant Jordi is Catalonia’s primary patron of lovers, taking precedence even over St Valentine. Traditionally, a man gives his beloved a single red rose with an ear of wheat, and women give their lovers a book. These days, however, you will also see women receiving books, and men roses.

Why a single red rose and an ear of wheat? According to tradition, this gift combines three symbolic characteristics: the single flower represents the exclusivity of the lover’s feeling, the rose’s red colour symbolizes passion, and the ear of wheat stands for fertility. These are the elements that make it a good gift for a loved one on a special day like this.