For almost two hundred years Montenegro was unknown to the world and, like the rest of what was then European Turkey, a forgotten country without a history. Montenegro was rediscovered in the west in the 19th century during hard and long independence struggles of the peoples living under the Ottoman Empire.

‘The Eastern Question’ was an umbrella term coined in the west for the complexities surrounding the uprisings of the oppressed peoples within the Ottoman Empire, the external wars against the Ottomans, and the rivalries of the European powers for control over the territories of the declining Ottoman Empire.

These events periodically renewed outside interest in the Ottoman Empire, its peoples and European provinces, inspiring the first travel accounts and histories, and establishing Montenegro on the map. 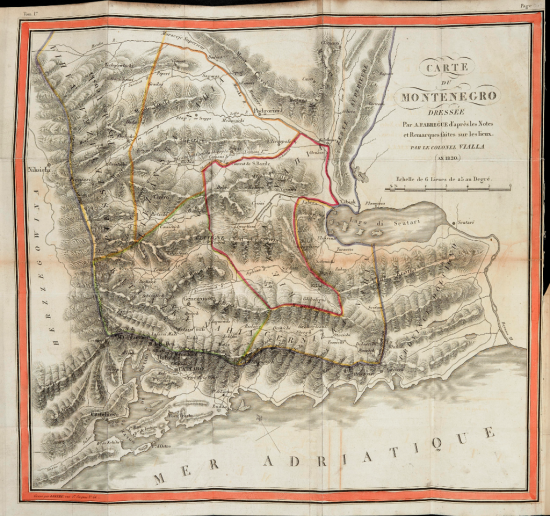 Significant features of some of the early works about Montenegro are their contemporary cultural observations as well as the publication of important historical sources such as international agreements, written records, and the first law-codes of Montenegro. Western accounts were published to inform the public, to mark and celebrate important anniversaries or events, and some of the books were written with scholarly ambition and scientific purpose. 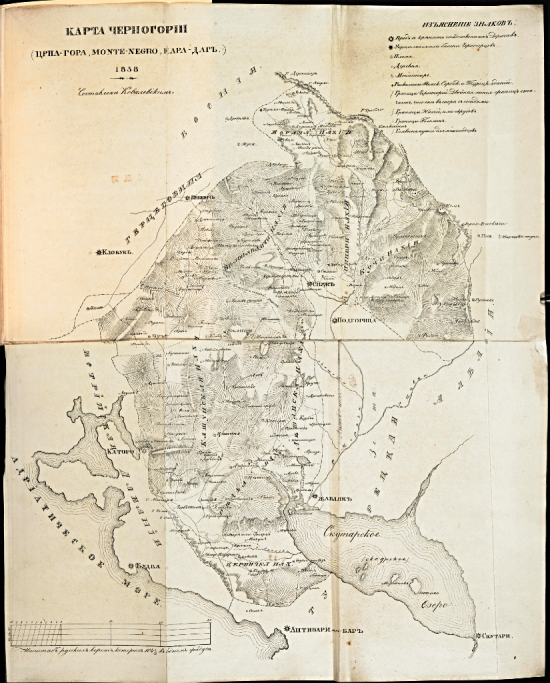 Characteristically the first historical accounts of Montenegro, published in the Serbian language, drew on oral history traditions and on personal memories and experiences. Some early historians were in the service of the ruling prince-bishops of the Petrović-Njegoš dynasty and had unfettered access to the archives, which contained official correspondence and documents, chronicles and annals, as well as the first printed history of Montenegro published in St Petersburg in 1754,Vasilije Petrović Njegoš’s Istoriia o Chernoi Gory (9475.b.44.) 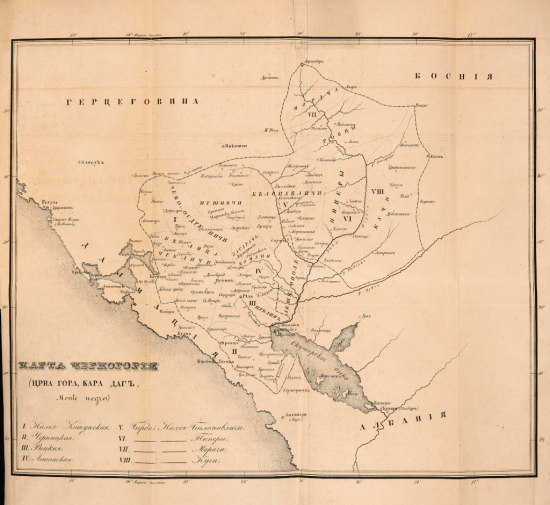 Montenegro was landlocked and surrounded by the Ottoman provinces of Bosnia, Herzegovina and Albania; to the south Montenegro bordered the Kingdom of Dalmatia, part of the Austrian Empire. 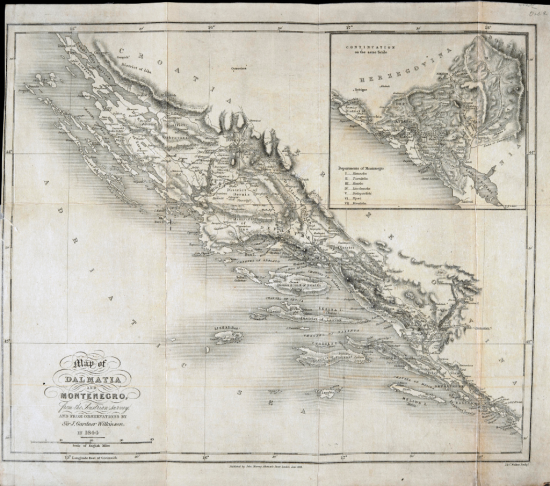 Most 19th century history books on Montenegro describe four distinctive periods in the history of Montenegro: the mediaeval period to the end of the 14th century followed by two periods, one from 1516 to 1697, and the other from 1697 to 1850, and then the contemporary period from 1850 onwards. 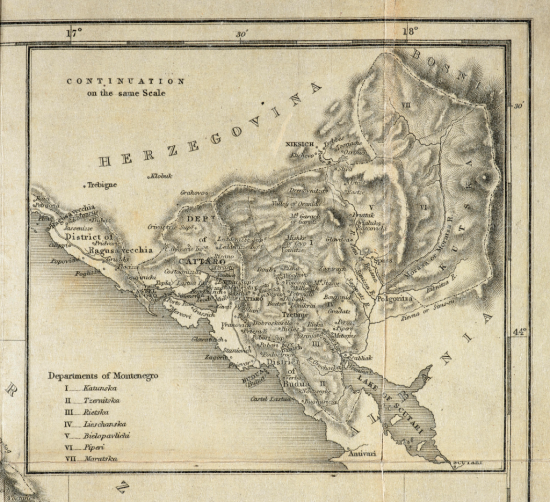 Detail showing Montenegro and its administrative regions, from Wilkinson, Dalmatia and Montenegro

The name Montenegro (‘Black Mountain’) probably first appeared during the reign of Ivan Crnojević (1465-90) who moved his residence to the country’s final stronghold, at the foot of the mountain Lovćen, against the invading Ottomans. The period from 1516 to 1697 is the least- known in the history of Montenegro. During this time, while under Turkish domination, the clans of Montenegro were in constant conflict among themselves and against the Ottomans. The clans’ resistance to Turkish rule, however, grew stronger over time, and from 1603 Montenegro became de facto an autonomous province of the Ottoman Empire. The historical record of the period from 1516 to 1697 does not provide much more detail beyond the names of the elective metropolitans of Montenegro and the Montenegrins’ participation in the Venetians’ wars against the Ottomans. 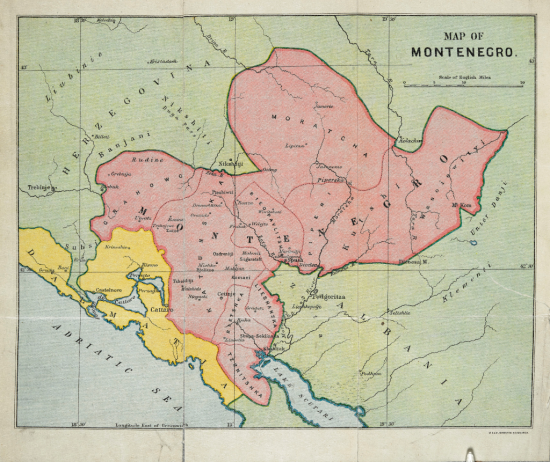 A turning-point came with the election of Danilo Petrović, from the Njeguši clan in Katunska nahija, as Metropolitan of Montenegro in 1697, a position he held until his death in 1735. His main efforts were directed towards the unification and emancipation of Montenegro, the implementation of the customary law of the country for clans and individuals in conflict, and the establishment of the Petrović-Njegoš dynasty, which ruled Montenegro from 1697 to 1918. From his time the politics of Montenegro towards the Ottoman Empire were intertwined with its political and military relations with the far-away Russian Empire, the neighbouring Venetians and the Austrian Empire.

Another defining moment in the history of Montenegro was the union of Old Montenegro with The Hills after decisive victories over the Ottoman forces in 1796. 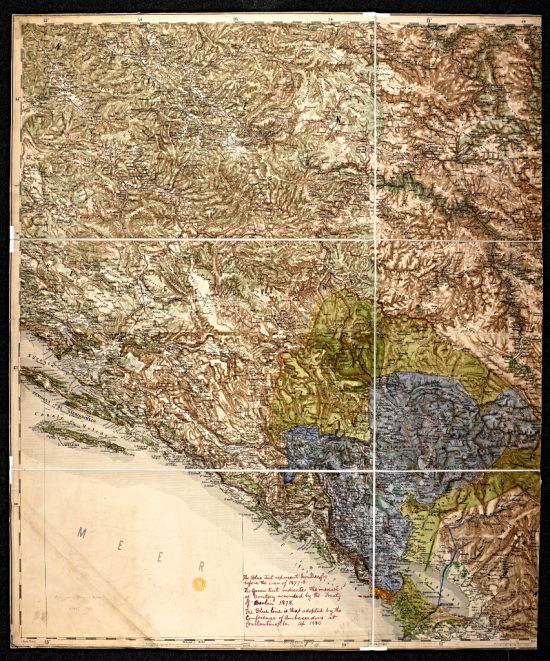 Maps 43625. (17.). Map of Montenegro and its adjacent territory, coloured to show the changing boundaries in the late 1870s. Blue shading represents Montenegro before the war of 1877-8, green shading the increase of territory accorded by the Treaty of Berlin 1878, and the blue line is the border adopted by the Conference of Ambassadors at Constantinople in April 1880.

In 1850 Montenegro became a secular principality under the patronage of the Russian Empire, which was the long-standing sponsor of the metropolitans of Montenegro and of Montenegrin independence and statehood.

In 1876 Montenegro took part in the Serbian war against Turkey that soon culminated in the Russo-Turkish War of 1877-78 in which Montenegro finally acquired its long-fought independence from the Ottoman Empire and an expansion of its territory. 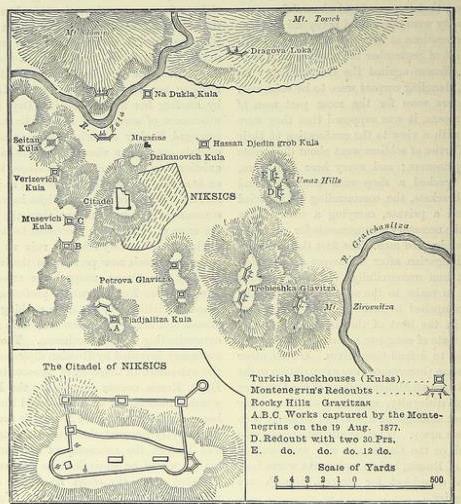 The war of 1877-1878 in Montenegro, presented in Cassell’s Illustrated History of the Russo-Turkish War (London, 1896) 9136.i.2. You can see the map superimposed on one of present-day Montenegro here. 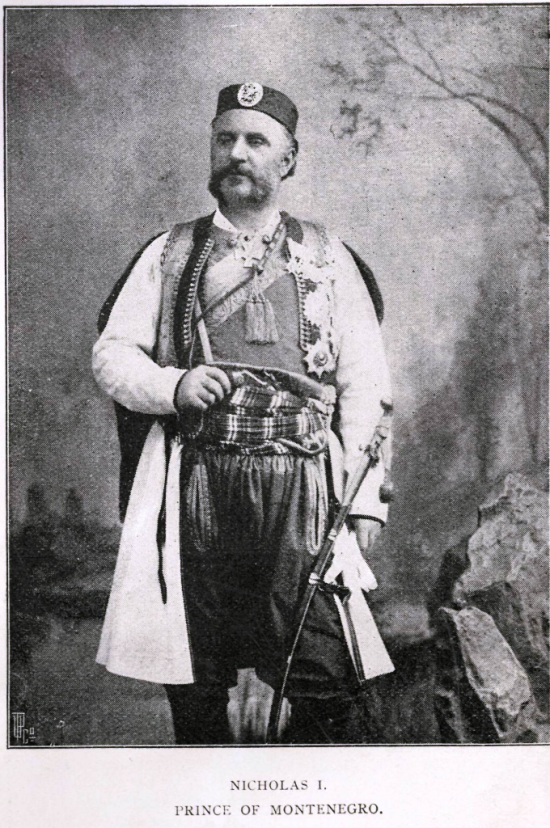 A collection of 12 history books in five languages (German, Serbian, French, English and Russian), published between 1846 and 1888 and now digitised by the British Library, offers a fascinating perspective into the growth of knowledge about Montenegro in the 19th century. These books, some of them very rare, remain relevant today as invaluable historical sources and important documents on the basis of which our critical knowledge of the history of Montenegro was created over time.