The tradition of Easter Passion Plays, re-enacting the Biblical story of Jesus’s last days, crucifixion and resurrection, dates back to the Middle Ages, but the world’s most famous Passion Play, performed once every decade in the Bavarian village of Oberammergau, has its origins in the 17th century. 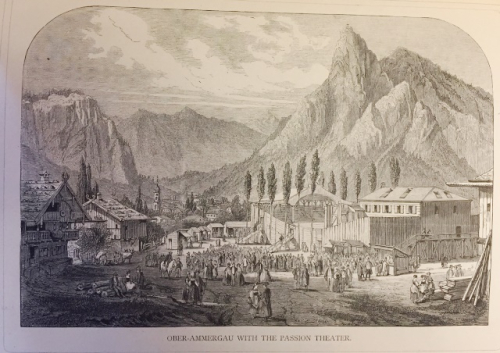 During a plague epidemic in 1633 the villagers swore an oath to re-enact the Passion every ten years if they were spared from further deaths. The death-toll allegedly fell to nothing and in 1634 the villagers duly staged their play for the first time. The regular performance year was later moved to the last year of each decade. 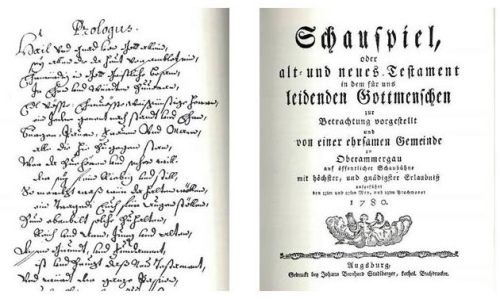 Opening of the oldest surviving version of the script (1662), and a programme for the 1780 performance. Reproduced in Norbert Jaron and Bärbel Rudin, Das Oberammergauer Passionsspiel: eine Chronik in Bildern (Dortmund, 1984) YV.1987.a.740.

The play combines the action of the Passion story with sung choruses and tableaux of Old Testament scenes interpreted as prefigurations of the life of Jesus. As Oberammergau had no existing Passion play tradition, the first play-text was put together from various sources. In its first two centuries it underwent various revisions and rewrites, reaching its longest-lasting form in 1860 in a version by the local priest, Joseph Alois Daisenberger. 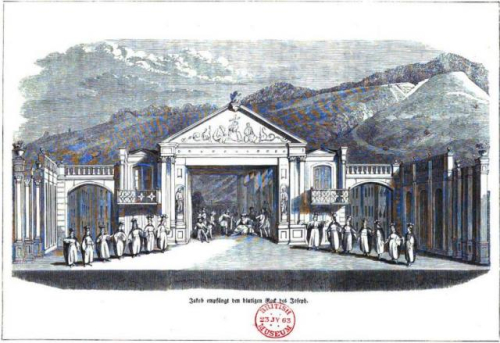 In the mid-19th century, the Oberammergau Passion Play began to attract wider attention, as more visitors from outside began to attend the performaces and to publish accounts of their impressions. One such account of the 1850 play by the actor Eduard Devrient was particularly influential in establishing the play not just as a moving religious experience but also as an expression of the ‘German national spirit’. 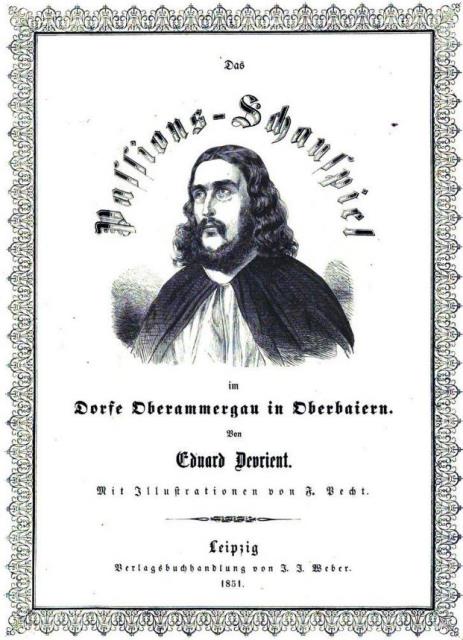 It was the former aspect (as well as improvements to transport and the development of international tourism) that began to draw ‘pilgrims’ from beyond Germany to the play. Even those prepared to be cynical, fearing crude performances by uneducated peasants, tended to find themselves overwhelmed by religious feeling. Gerard Molloy, writing about the performances of 1871 (the regular cycle had been disrupted by the Franco-Prussian War), quotes a number of emotional responses from British visitors, including a woman who ‘forgot all but the wonderful story of our salvation and cried all day.’ A less overwrought account is found in Jerome K. Jerome’s Diary of a Pilgrimage (Bristol, 1891; 12331.i.36.), which combines a comical description of the author’s journey to Oberammergau in 1890 with a fairly straight discussion of the play itself. 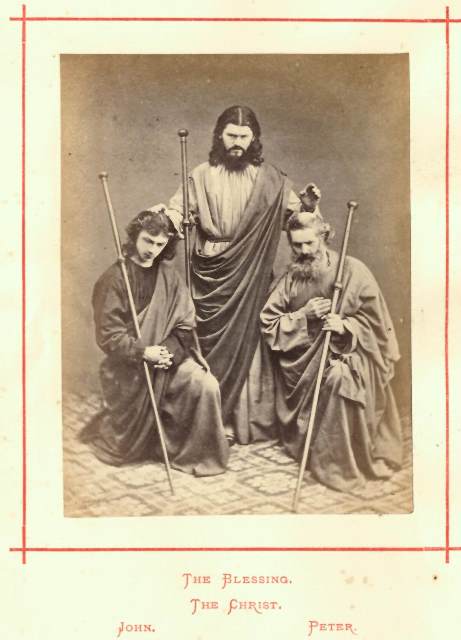 As the play’s international popularity grew, guidebooks and programmes began to appear, featuring not only details of the performances but also advertisements for local hotels, restaurants and shops, and advice about places to visit nearby. The play was becoming a focus for package holidays and an important part of the local economy. 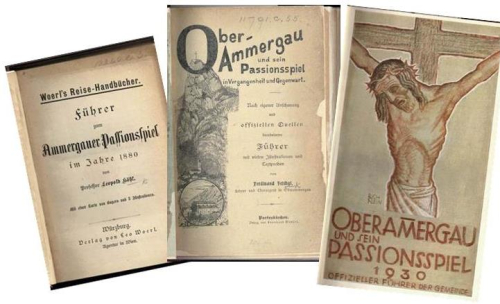 Some of the local performers also began to enjoy a degree of celebrity. Their portraits featured in many accounts, and one lavish souvenir volume of the 1890 performances even includes pictures of the principal performers’ houses. Anton Lang who played Jesus from 1900-1920 published an autobiography which ran to two editions. But despite all the publicity and the commercial aspect of the festival, the people of Oberammergau continued (and continue) to see the play first and foremost as a solemn religious undertaking. 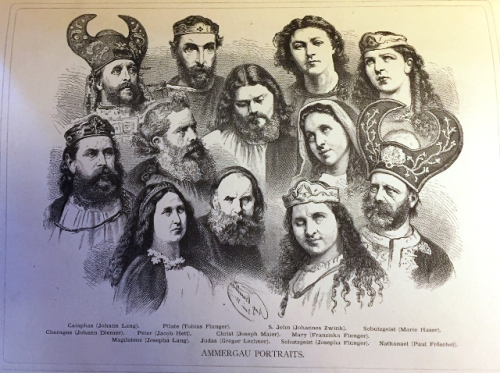 Above: Portraits of the principal performers in 1890, from John P. Jackson, Album of the Passion-Play; Below: Title-page of Anton Lang, Aus meinem Leben (Munich, 1938) 10710.a.47, with a portrait of Lang in the character of Jesus 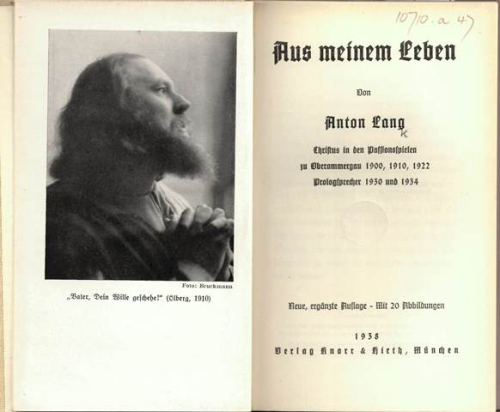 In 1934 additional performances of the play took place. These marked the 300th anniversary of the original production, but were also used by Germany’s new Nazi rulers to link the play and Devrient’s conception of its ‘German national spirit’ with their own regime. The introduction to the 1934 edition of the play-text makes this clear, speaking of ‘the fortune of a new life which unites us all in our race’ and of ‘the suppression of the antichristian powers in our fatherland’. 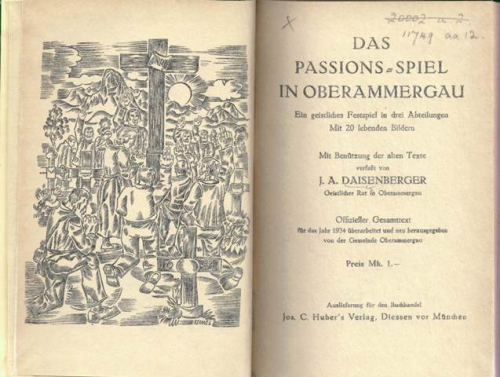 One feature of the play that particularly appealed to the Nazis was the strongly anti-semitic slant of the text. This troubling aspect was highlighted as early as 1901 in a book by an American Rabbi, Joseph Krauskopf, who had seen the play in 1900 and was shocked and angered at ‘seeing one gross misrepresentation of the Jewish people after the other’. Astonishingly, however, even after 1945 the issue of antisemitism was not addressed for some decades, in spite of growing international complaints and a partial boycott of the 1970 performances in protest. Although the play had a history of being revised and rewritten, Daisenberger’s 1860 text had somehow acquired a canonical status which the organisers were obstinately unwilling to challenge, and it was used more or less unchanged until the 1980s. It was only in the following decade that Oberammergau began seriously to reconsider the play’s depiction of Jews and Judaism. Change has been gradual, but recent directors have worked with both Jewish and Catholic experts to create a script and presentation more in keeping with a modern understanding of the New Testament story, and in particular to remind audiences that Jesus himself was Jewish.

How well these challenges have been met will be apparent when the play is next performed. It is to be hoped that this remarkable , nearly 400-year-old tradition of community performance can survive in a form fitted to our times, to be appreciated by religious and secular audiences of all backgrounds alike.