In 1772 Joseph Banks, a wealthy 29-year-old landowner and one of the early naturalist explorers, led the first British scientific expedition to Iceland, then a dependency of the kingdom of Denmark-Norway. Banks had been on the celebrated Endeavour expedition with Captain Cook  in 1768-71, one of the most important voyages of discovery ever made. A member of the Royal Society since 1764, he was accepted for Cook’s voyage as a supernumerary in natural history, after he offered to pay not only for himself but a party of eight including artists and scientists. His participation on the Endeavour elevated Banks to ‘a figure of international scientific significance’ (Gascoigne, p. 692). 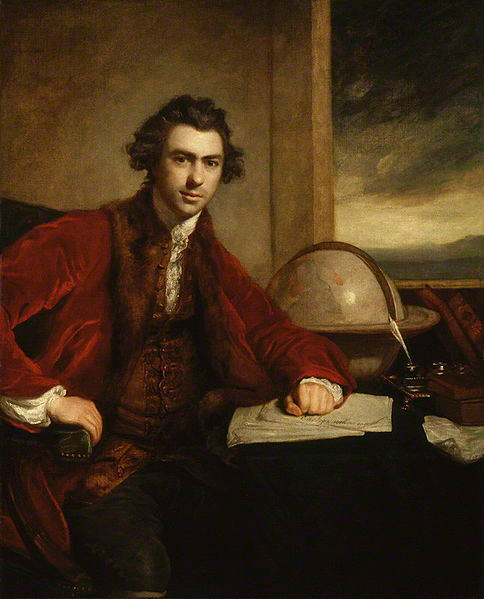 Due to the success of the Endeavour voyage another expedition to the South Pacific was planned for 1772. The prime aim of the second Cook voyage on the Resolution was to search for the existence of an Antarctic continent, the mythical Terra Australis. Banks, convinced that a ‘Southern’ continent existed, was overjoyed when Lord Sandwich, the First Lord of the Admiralty, invited him to be the scientific leader of the expedition.

Throughout the winter of 1771-72, Banks was busy assembling a party of scientists, artists, secretaries and servants, including a French chef, as well as vast equipment for collecting specimens, again at his own expense. All was progressing well until Banks saw the shipboard facilities for himself and his party. He became famously displeased. The vessel, he thought, was simply not large enough to accommodate his entourage and after a heated exchange with the Navy Board he abandoned the Resolution expedition in a fit of pique, thus earning himself negative epithets both from contemporaries and his later biographers.

To the disappointed Banks, it was, however, of prime necessity to engage his men in a new project. By early June he had settled on his new destination. Instead of searching for a massive continent south of Australia, he decided to head north, his choice falling on Iceland. The question begging to be answered is: why Iceland? 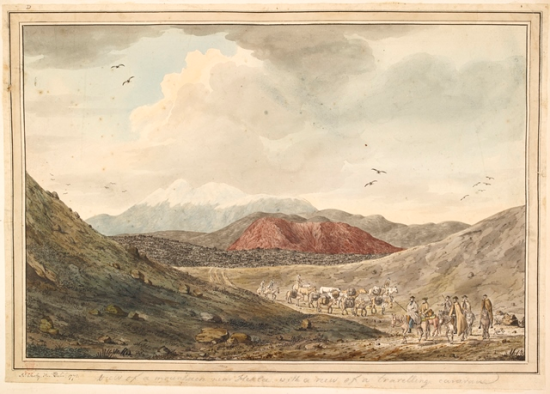 Scholars have advanced various theories, but in his Iceland journal Banks adequately explained the reasons for his decision. As the sailing season was much advanced he:

saw no place at all within the Compass of my time so likely to furnish me with an opportunity as Iceland, a countrey which...has been visited but seldom … The whole face of the countrey new to the Botanist & Zoologist as well as the many Volcanoes with which it is said to abound made it very desirable to Explore... (Banks’s Journal, p. 47).

And from the documentary evidence it seems clear that seeing ‘burning mountains’, as volcanoes were called at the time, had become the major aim of the voyage. There was a growing interest in volcanology and in his passport, quickly issued at the beginning of July by the Danish envoy in London, the main purpose of Banks’s visit was recorded as observing Mount Hekla, the most famous of the Icelandic volcanoes. The ascent of Hekla was the highlight of the expedition, the measurements of the spouting hot springs described by Banks as ‘volcanoes of water’ (the word geyser was coined later, Geysir being the proper name of the most magnificent of the Icelandic hot springs), coming a close second. On their return The Scots Magazine reported in November 1772 that they had ‘applied themselves in a particular manner to the study of volcanoes’. 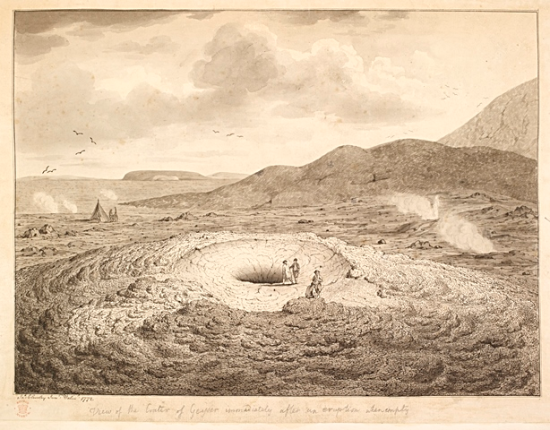 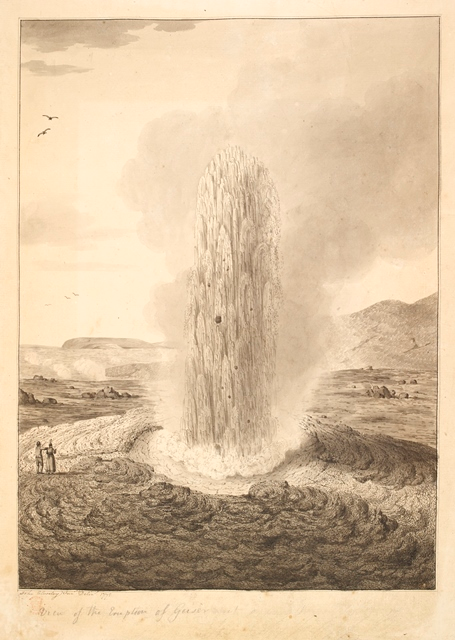 Banks prepared his voyage as best he could within the limited period of time he had. Understandably he found no-one in London who had been to Iceland but Claus Heide, a Dane resident in London, gave him information ‘Chiefly out of books’ (BL Add MS 8094, ff. 29-30). The King of Denmark was notified of their wish to visit Iceland and was only too happy to sanction the ‘celebrated English Lords’ journey.

Among the members of the expedition were three artists: John Cleveley Jr, James Miller and his brother John Frederick Miller, and their magnificent drawings and watercolours are invaluable sources. These illustrations, over 70 of them, are now in the British Library and in steady use (Add MS 15511-15512). 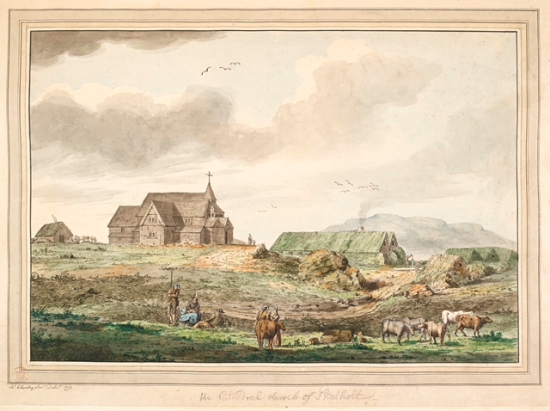 John Cleveley the younger, View of the Cathedral Church of Skálholt, southern Iceland; with houses, and villagers tending cattle in the foreground, Add MS. 15511, f.17

Banks also collected Icelandic manuscripts and books – something he had prepared before his departure as he wrote to Bodley’s Librarian, the Reverend John Price, that he was about to sail to Iceland and while there would endeavour to procure Icelandic manuscripts. Today over 120 books and 30 manuscripts are in the British Library, including copies of the first Icelandic version of the Bible from 1584, Snorri Sturluson’s Edda and the most famous saga, Njal’s Saga (Add MS. 45712, 4857-96). Men were sent to the only printing press in Iceland, at Hólar, to buy copies of the books printed there. In the years following his visit the district governor Ólafur Stephensen, now a friend, continued to collect and consequently ‘charged our best copyists to transcribe the antiquities and sagas’ (24 June 1773, Sir Joseph Banks, Iceland and the North Atlantic 1772-1820, p. 183)

Banks’s chartered ship, the Sir Lawrence, a brig of 190 tons, with a crew of 12, eventually left Gravesend on 12 July 1772, ironically the same day as Cook started on his second voyage. He arrived in Iceland at the end of August and after an eventful stay of six weeks they left in early October, loaded down with, among other objects, specimens of lava, Icelandic manuscripts and two Icelandic dogs, aptly named Hekla and Geysir.

As a consequence of the Iceland expedition, Banks became the acknowledged British expert on Iceland and a faithful friend of the Icelanders. Three decades later during the Napoleonic Wars, Banks assumed a crucial political role as self-appointed protector of Iceland, smoothing the way for their trade during the conflict and repeatedly urging the British government to annex the island for the benefit of the inhabitants. He became the architect of Britain’s political and commercial policy towards the Atlantic dependencies of the Danish realm.