“A rogue and a madman”: August Strindberg's Antibarbarus

In his anti-literary 1890s, August Strindberg took to the laboratory to experiment in alchemy, and some of his thoughts led to a peculiar book published in Germany in 1894 called Antibarbarus I: oder Die Welt für sich und die Welt für mich (YA.1990.a.22668). His discovery of the process of transmuting lead into gold was conjecture and anti-scientific, if anti-anything, but 13 years later, this simple pamphlet, first published in Germany, transmuted into one of the finest luxury editions printed in Sweden. 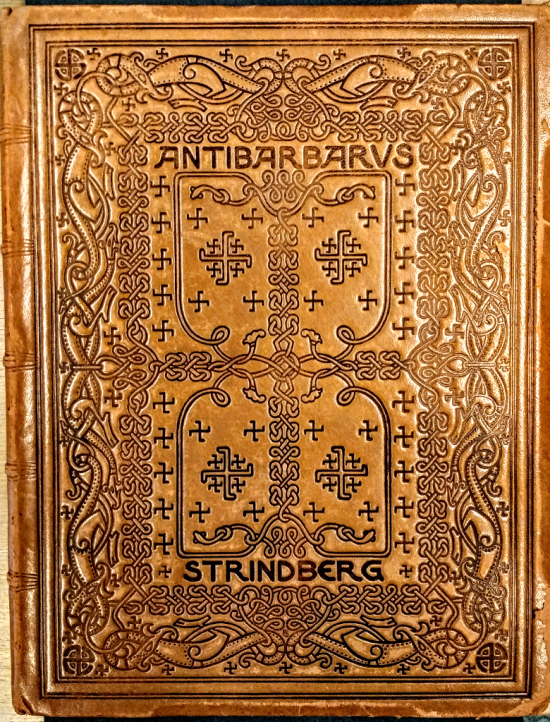 Strindberg composed Antibarbarus as a series of letters written in the second person, addressing an unidentified correspondent on diverse scientific principles. His first letter was entitled, ‘The ontogeny of sulphur’, the second, ‘On the transmutation of matter, transformist chemistry, or everything in everything’, the third, ‘Thoughts on the composition of air and water’, and a fourth, simply ‘Paralipomena’. He himself thought he ‘simply drew all the logical conclusions inherent in Transformism and Monism,’ (letter to Torsten Hedlund, 23 July 1894) that is, the belief that all matter has a single shared substance and elements differ only in their properties and not as entities, to paraphrase his first letter.

What he did not account for was the mixture of bemusement and vehement criticism that the publication received. In a letter to Georg Brandes, soliciting the great critic’s help in reviewing it favourably in Denmark, Strindberg writes that his work ‘has caused the Swedes to depict me as a rogue and a madman […] There is in fact not a single paper in Sweden honourable enough to print a word in my defence’, ultimately surprised ‘to see a whole country’s chemists so blinded by jealousy that they cannot acknowledge their own views when they see them put forward by someone they find offensive!’ (31 May 1894). Even his friend and the translator of his Swedish manuscript into German, Bengt Lidforss, reviewed it harshly in Dagens Nyheter—albeit under a pseudonym, which was scant consolation. 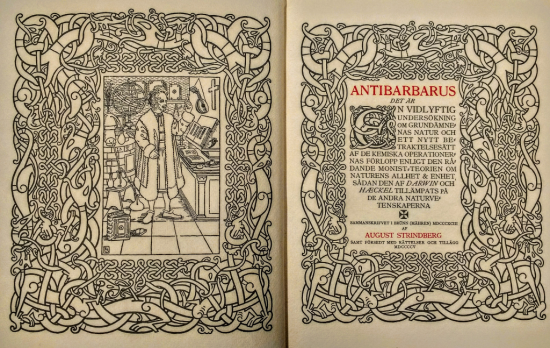 Five years later, the magazine Nordisk Boktryckarekonst (Stockholm, 1900-1925; PP.1622.h.) was established by Hugo and Carl Lagerström, who subsequently set up a publishing house, with aim of inaugurating an authentic Nordic style of book design. They sought a work with which to begin a series of bibliophile editions and Arthur Sjögren was enlisted both to produce the book and to convince Strindberg to volunteer the first idea for the series. Sjögren, who had worked with Strindberg, arrived at Strindberg’s studio to find a chemist’s laboratory in disarray and the author-cum-goldmaker deep into experiments. With Strindberg only thinking about scientific works, they eventually landed on Antibarbarus. The Antibarbarus manuscript had been under perpetual revision and expansion since 1894 and, with Strindberg’s encouragement, the Lagerströms decided to take it on. 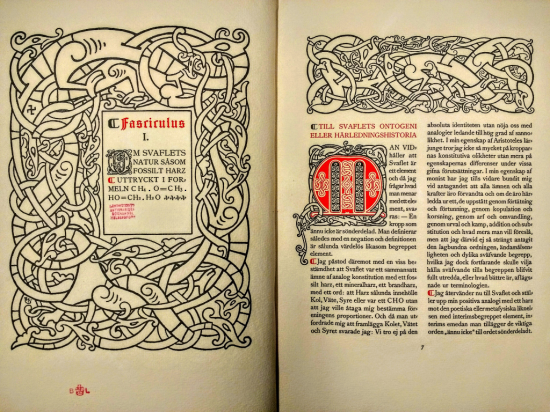 Taking nearly a year to produce, Antibarbarus had a limited print run of 299, each copy priced at 30 Krona. To put it in context, very few books cost over 10 Krona and Strindberg’s luxury edition of Ordalek och småkonst, which came out a year earlier in 1905, cost 8.50. No expense was spared from the light-brown leather binding incorporating the same decorative coils and knots that frame the text throughout, to the thick hand-made paper from Grycksbo  with a specially designed watermark by Sjögren, depicting a four-leaf clover over a three-leaf clover. The coiled dragon-tail ornamentation that envelops the title-page is derived from Viking picture stone iconography, which speaks to the National Romantic ethos of the new publishers, but by no means renders William Morris’s decorative influence any less obvious. The portrait of a Faustian Strindberg facing the title-page takes us back to Sjöberg’s encounter with the author in his laboratory, while drawing comparisons with Goethe, as a similar polymathic genius.

Like his illustrated works before this, Strindberg’s manuscript influenced the artistic design and the drop capitals and annotations set within the body of the text appear to be original to the author. Notes are literally indicated by a red hand pointing and paragraphs are marked by red pilcrows, rather than spaced out. Connoisseurs did not particularly warm to these latter innovations in the layout but the book has been acknowledged to be one of the most exquisite Swedish books ever produced. Georg Svensson considers it Sjögren’s best. 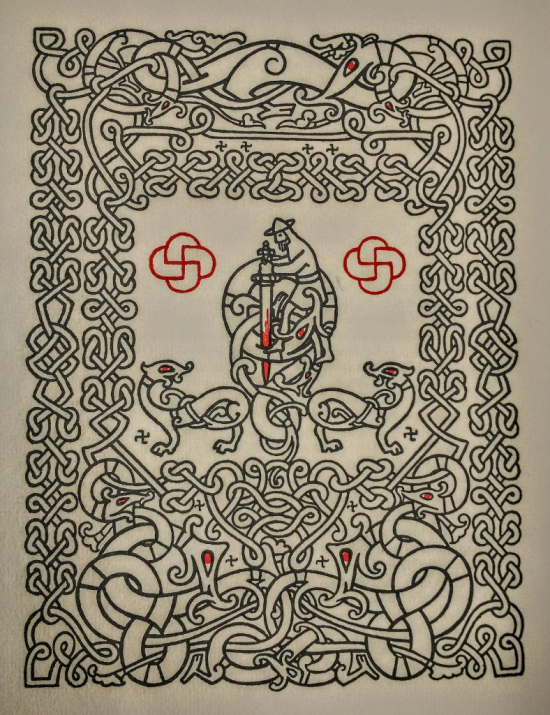 Ultimately, we might say the design is in harmony with the content. One critic, G. Bargum, reads the work as the creative scientist’s labyrinthine search for a greater truth where each path is a dead end. He suggests that what is stabbed in the final ornamental image is a many-headed Hydra, who constricts the courageous opponent, so that he will never escape. A review in Dagens Nyheter (cited in Samlade Verk) prefers to see the dragon finally slain by a Sigurd figure and the obstacles triumphantly overcome. While Strindberg never made gold and never did conquer the world of science as his anti-barbarian persona might have wished, his creative genius – with all its delusions and idiosyncrasies – is still wonderfully celebrated in this book, paradoxically ensuring a legacy for his failure.