Do not lean out of the window – especially in Prague

One of the phrases that eager young travellers embarking on an Interrail adventure speedily acquire is the injunction found on most European trains to avoid the perils of hanging out of the window – è pericoloso sporgersi and the like. As they cross the border into the Czech Republic they will see the warning Nenahýbejte se z oken – i.e. ‘do not lean out of windows’. To those familiar with the history of the area, this might well seem to be a particularly timely admonition.

In recent times there were at least two instances of notable Czech figures who met their end in this way: in February 1997 the author Bohumil Hrabal died after falling from a window on the fifth floor of Prague’s Bulovka Hospital, attempting to feed pigeons. More sinister was the death of the politician and diplomat Jan Masaryk, who on 10 March 1948 was found dead, dressed only in his pyjamas, in the courtyard of the Foreign Ministry in Prague. Although the initial investigation by the Ministry of the Interior stated that he had committed suicide by jumping out of the window, a second investigation, carried out in 1968 during the Prague Spring, ruled that it was an accident, while a third, held in the early 1990s after the Velvet Revolution, concluded that he had been murdered by the emerging Communist authorities.

These were only two examples of a tradition that had long been endemic to the Bohemian capital. Today marks the 400th anniversary of the dramatic events of 23rd May 1618 which launched the Thirty Years War. However, it was not the first time that something similar had happened there; the so-called First Defenestration of Prague had occurred in July 1419, when an angry crowd of Czech Hussites stormed the New Town Hall (Novoměstská radnice) on Charles Square and defenestrated the judge, the burgomaster, and several members of the town council, who were all killed by the fall. This demonstration of growing discontent at the inequality between the peasantry, the Church and the nobility led to the outbreak of the Hussite Wars, which lasted until 1436. 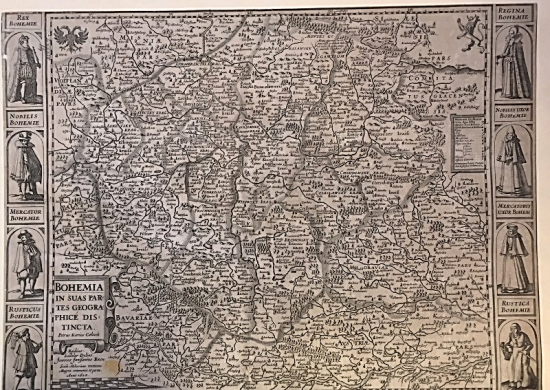 Almost 200 years later the scene was replayed in the imperial chancellery in Prague Castle, though this time with less immediately fatal consequences. For some time previously tensions had been growing between the Protestant nobles and the Catholic supporters of the Holy Roman Emperor. Rudolf II, Holy Roman Emperor and King of Bohemia (1576–1612), had increased Protestant rights, but as he became more and more eccentric and reclusive he was regarded as unfit to govern, and his younger brother, Matthias, was declared the head of the Habsburg family in 1606. In 1609 Rudolf ’s Letter of Majesty, which granted Bohemia's largely Protestant nobles the right to exercise their religion, essentially established a Protestant Bohemian state church controlled by the Estates, ‘...dominated by the towns and rural nobility.’ 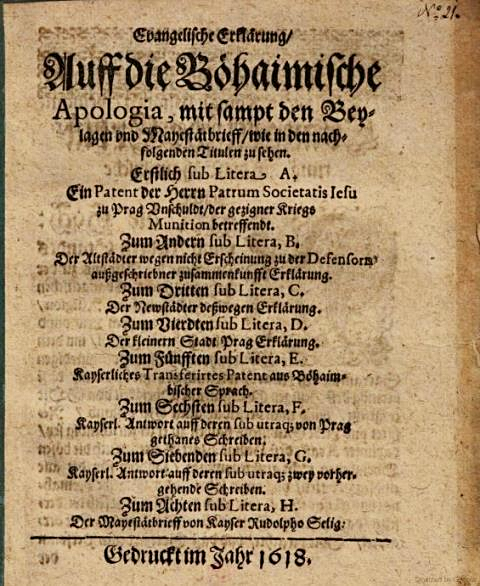 Matthias succeeded to the throne of Bohemia in 1612 and on the advice of his chancellor, Bishop Melchior Klesl, extended his offer of legal and religious concessions to Bohemia. As he was childless, he appointed his cousin Ferdinand of Styria his heir and had him elected king in 1617. Ferdinand, a staunch supporter of the Counter-Reformation, was less tolerant, and in 1618 he forced the Emperor to order the closure of two Protestant chapels on royal lands in the towns of Broumov and Hrob. A meeting was called in Prague to attempt to resolve the dispute, but the protest against the closing of the churches was rejected, and as the argument grew more and more heated the Protestant nobles, incited by Count Jindřich Matyáš Thurn-Valsassina, the deposed Castellan of Karlstadt, threw the Imperial governors Jaroslav Martinic and Vilém Slavata, as well as their secretary Philip Fabricius, out of a window on the third floor of the Castle.

The Catholics hailed the fact that all three survived 70-foot (21-metre) fall without major injuries as a sign that they were protected by the Virgin Mary; the more prosaic Protestants, however, noted that they had landed on the castle midden which had broken their fall. However, the incident exacerbated the tensions between Protestants and Catholics throughout the entire Holy Roman Empire, culminating in the election of Ferdinand II as Emperor in 1619, and inflamed a conflict which left lasting scars across the whole of Europe. Its effects extended even to England, as James I’s daughter Elizabeth and her husband Frederick, the Elector Palatine, who had briefly ruled as the ‘Winter King and Queen’ of Bohemia, had to make a precipitate escape from Prague after the Battle of the White Mountain in November 1620 where the Imperial troops finally crushed the cause of the Protestant nobles. 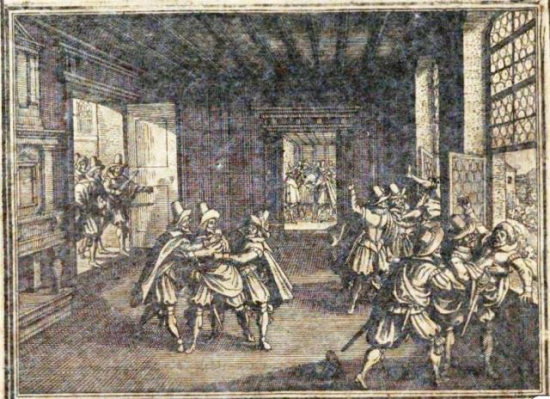 The effects of the Second Defenestration of Prague may not have proved fatal to its victims, but were nearly so for the culture and language of Bohemia. With increasingly rigid suppression of the Protestant cause and the Czech language, the area sank into the period simply known in Czech as doba temná - the Dark Age. German was imposed as the language of public life and Latin was used in the universities, leaving the clergy as the only educated speakers of Czech as they needed it to minister to their parishioners; it was not until the National Revival in the late 18th century that it once more gained ground as a medium for literature and scholarship. It would go on not only to survive but to flourish, proving that whatever was thrown out of the window that day in 1618, it was not the spirit and identity of the Czech people.