Janusz Korczak – the champion of children

Elizabeth Gifford’s novel The Good Doctor of Warsaw (London, 2017; ELD.DS.232274) was the subject of a recent British Library event. It is based on the true accounts of Misha and Sophia, two young Polish Jews who helped Janusz Korczak in the Warsaw Ghetto during the Second World War. Korczak is best remembered for his heroic death march with 200 orphan children to the gas chambers in Treblinka on 6 August 1942. Janusz Korczak was born Henryk Goldszmit into a wealthy Jewish family in Warsaw in 1878. He was a doctor by profession, an educator at heart and a gifted author. In his early years he experienced adults’ lack of respect and concern for children, an experience that greatly contributed to the choice of his later path in life. Henryk’s childhood was disturbed by his father’s mental illness. His premature death left the family impoverished and the 18-year-old Henryk began tutoring to support his mother and younger sister. He then discovered that he liked working with children. At that time he published his first pedagogical articles about raising and educating children and tried his luck as a writer under the pseudonym Janusz Korczak. 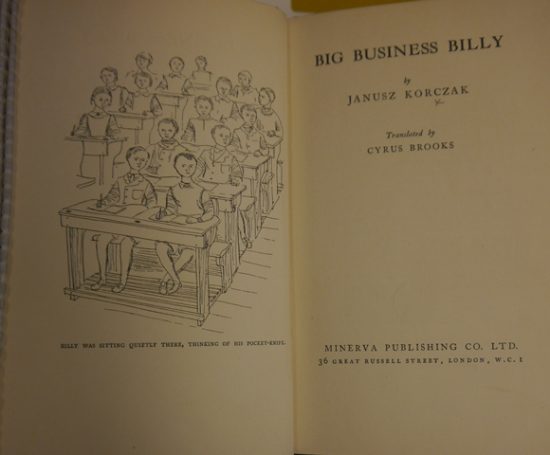 Title-page and frontispiece from the English translation of one of Korczak’s children’s books, Big Business Billy (London, 1939). 12825.eee.5

However, two years later he enrolled as a medical student at Warsaw University. He decided to be a doctor, not a writer; as he said in his journal “literature is just words, while medicine is deeds”. In 1904 he graduated as a paediatrician and took up work at a Jewish hospital for children in Warsaw.  Korczak was also active as a tutor at summer holiday centres and continued to write children’s novels which reflected his experience both as a doctor and educator. In 1912 he gave up work at the hospital to devote his life to poor orphaned children. 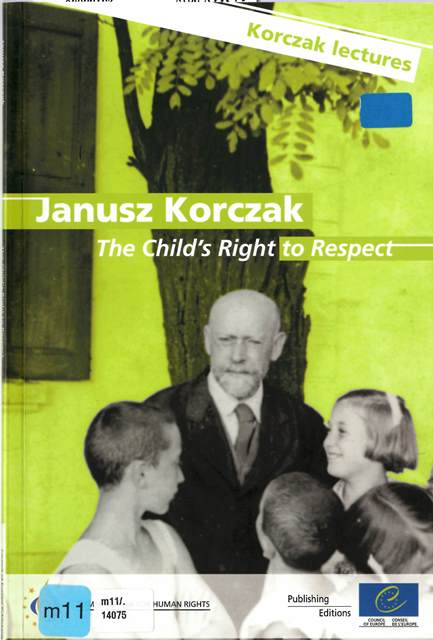 Korczak pictured with some of the children in his care, cover of Janusz Korczak: the child’s right to respect: Janusz Korczak’s legacy: lectures on today’s challenges to children (Strasbourg, 2009). m11/14075

Korczak established an orphanage for Jewish children, implementing his pedagogical ideas of treating children with fairness, justice, respect and empathy. The children had their own parliament, court and newspaper and all felt valued as equal members of the community.  Korczak emphasized the importance of giving the child a voice and in that he was a precursor of modern child psychology.  He wrote a number of books based on his daily observations of the children’s development.  His 1919 publication Jak kochać dziecko (How to love a child) formed the basis for the first International Declaration of the Rights of the Child in Geneva in 1924. His later booklet of 1929 Prawo dziecka do szacunku (The child’s right to respect) is considered his pedagogical manifesto. The child is the greatest asset of society. The child has a right to dignity as much as the adult has. Children are not the people of tomorrow, but people of today. 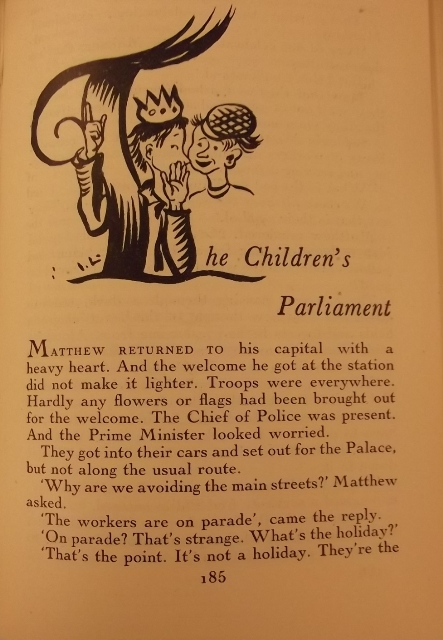 In more than 20 books Korczak  expressed his great love and concern for children. His best-known novel Król Maciuś Pierwszy (King Matt the First, also translated as Matthew the Young King), first published in 1922, was inspired by his own childhood memories, contemporary political events in Poland and the children of several orphanages he successfully ran in Warsaw. The book tells the story of a boy king’s adventures and his attempts to bring social reforms to his subjects. Written in the form of a fairy tale, the book addresses the difficulties of adult life and the responsibility for decisions they have to make. But at the core of this story is a child with the loneliness, dilemmas and struggles it faces in its daily life.