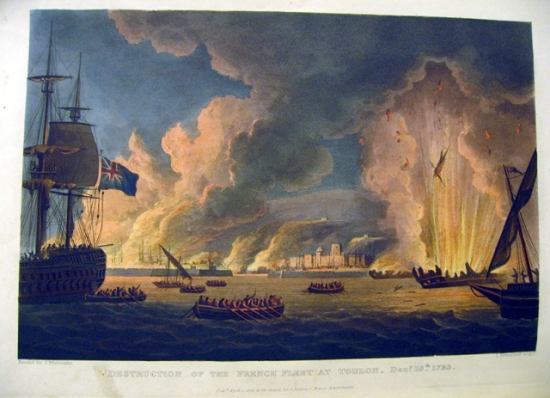 In an earlier blog post, we discussed the recent acquisition of a copy of the revolutionary Journal de Marseille published in 1793-1794, RB.23.a.37976. Now we would like to comment on the collection of pamphlets bound at the end of the volume. They include a revolutionary song, the “Chanson des sans-culottes”, by the comedian, theatre director, song writer and dramatic author Aristide Valcour. 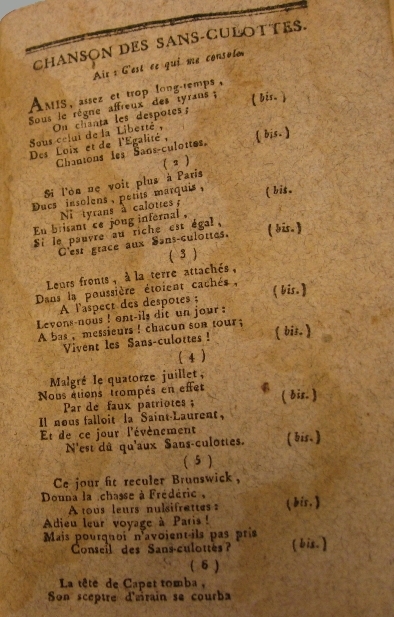 It is followed by the left-leaning, Jacobin-inspired Constitution of 24 June 1793, which was never implemented, preceded as is often the case by the Déclaration des droits de l’homme et du citoyen.  The collection also contains reports and political discourses held at the National Convention and the Committee of Public Safety , discussing topics such as religion, government or public instruction. 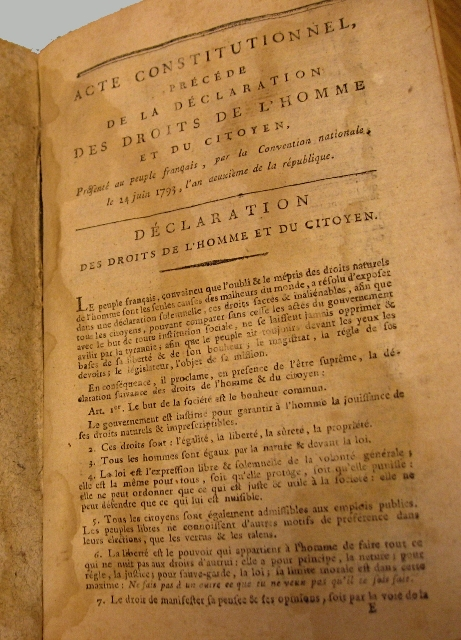 The volume is very coherent in the way it gathers contemporary revolutionary material from South-Eastern France. Initially, the titles of the additional pamphlets suggested that some were duplicates of existing tracts in the British Library’s collection. However, most of the tracts contained in the Journal volume are from different, often Southern editions, or in some cases have a different type-set. For example, the discourse Aux grands Maux les grands Remèdes by Sébastien Lacroix (the initial editor of the Journal de Marseille), held at F.617.(21.) was first printed in Paris, while the other copy, a reprint published in Marseille by Auguste Mossy in the same year (an II / 1793), is abbreviated, and followed by an order of the General Assembly of the Republican Section des Quatre nations for the printing and distribution of 3000 copies and 500 posters of Lacroix’s petition. 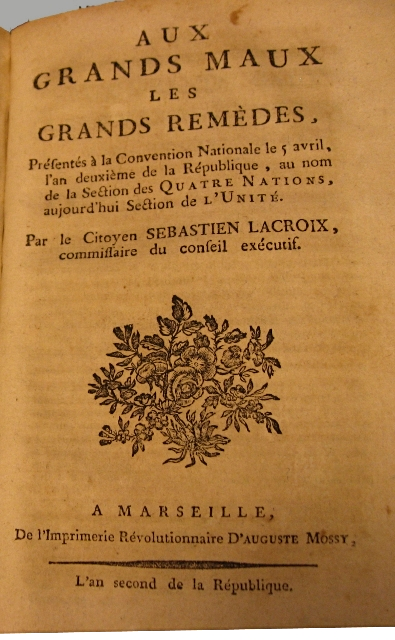 Lacroix is the author of another tract in the Journal de Marseille collection: La Religion naturelle, la seule qui convient à des Républicains, published in 1793-94 (an II) by Auguste Mossy (1764-1820): in the compilation, this is a duplicate of BL collection item, R.337.(15.). The Mossy family of printers  seems to have played a key role in the diffusion of Jacobin literature such as that transmitted in the volume (we don’t know who were its early owners: the opening paste-down contains an ex-libris signature which has been crossed out). Auguste Mossy, who printed 3 tracts in the compilation, was a fervent revolutionary who started his own printing business in 1791 and became a municipal councillor for the city of Marseilles until 1793 (he later held other important political functions, under the Consulate and the Napoleonic Empire but was demoted under the Bourbon Restoration). 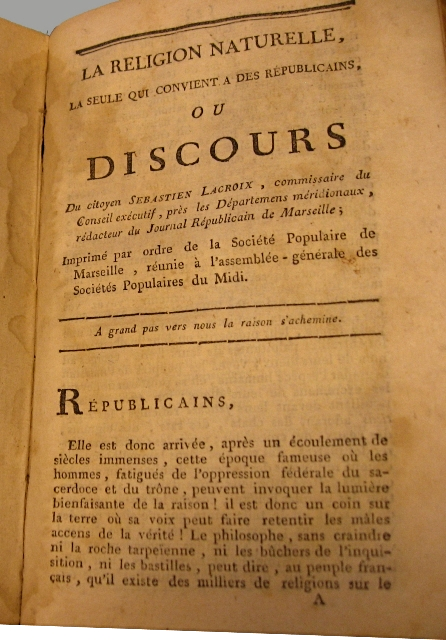 The patriarch, Jean Mossy worked with his sons Jean II and Auguste from 1784 to at least 1791. He was a printer for the Navy, the King/the Nation and the City of Marseille, and published important works in the 1770-80s on the antiquities of Marseille and the history of Provence and Comté-Venaissin. Jean II (1758-1835), who published 4 tracts in the Journal de Marseille compilation, inherited his father’s presses and his own son, Jean-Joseph Mossy, succeeded him as a printer and bookseller. 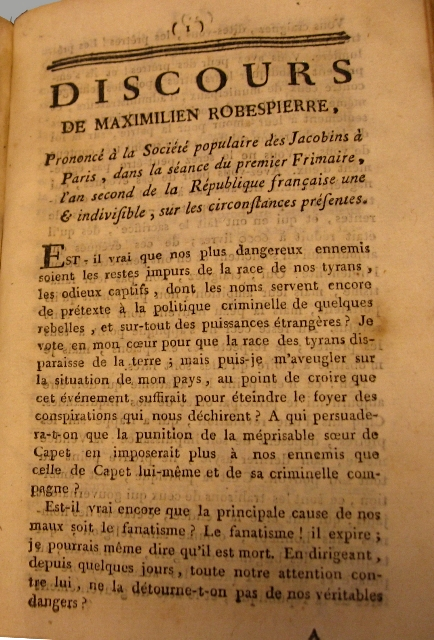 Other material bound after the Journal de Marseille include several discourses by figures such as Robespierre, Billaud-Varenne, Moyse Bayle  (a member of Marseille’s Jacobins club, deputy for the Bouches-du-Rhône department at the 1792 National Convention, involved in in 1793 with the Committee of Public Safety and the Committee of General Security) and Jean-Corisandre Mittié. 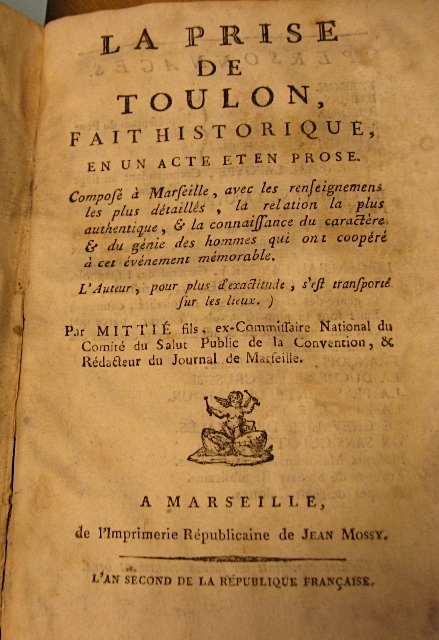 Instructions for the actors; Scene 1 from La prise de Toulon

Mittié, who was sent by the Committee of Public Safety to Marseilles in 1794, asserts on the title page of La Prise de Toulon that he travelled to Toulon to be able to provide the most “exact”, “detailed information, the most authentic account and knowledge of the character and genius of the men who contributed to this memorable event”. The Siege of Toulon  led to a wealth of dramatic and lyrical revolutionary creations written by professional authors and enthusiastic revolutionaries and performed mainly in Paris at the beginning of 1794. The victory of the Republicans (including the young officer Napoléon Bonaparte) over the Royalists and a coalition of British, Spanish and Italian troops in the city of Toulon, with its strategic port and arsenal, was celebrated throughout the country. 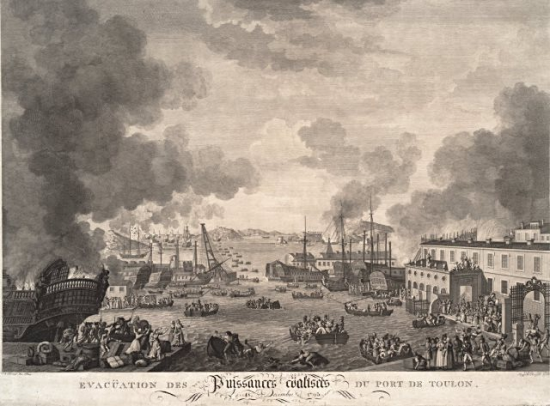 The list of characters and instructions to the actors give an idea of the ideological bias of Mittié’s play. The drama is represented as “useful” with its “patriotic influence”, because it “consecrates the most memorable period of the Revolution, the most decisive for the fate of Liberty”. On Republican side the Generals and Representatives of the people (including Fréron, Barras and Robespierre), who after the flight of the English and the fall of the city, stop the pillage and execute the traitors, must have a “strong voice and physique”, and the female heroine, “citoyenne Lapoype”, who was captured but eventually liberated, “the most touching voice and accent”. 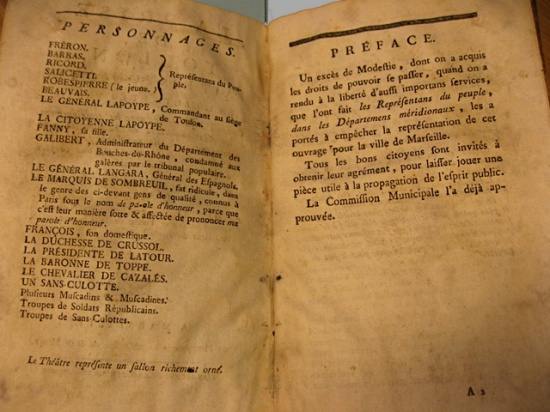 On the side of the Royalists, depicted as reactionary and dissolute, the Marquis de Sombreuil, the type of the coxcomb, must have a “tone leading to ridicule” and the Knight of Cazalés corresponds to the type of an old man. The play highlights the eventual execution and “guillotine” of “conspirators” and “traitors”. It ends with the ominous announcement by Fréron of the intended destruction of the city of Toulon (which in the end was not implemented by the authorities): “only ashes and rubble” will remain as “the hand of vengeance will erase up to the last remnant of Toulon”. It closes with the enthusiastic salutation: “the genius of Liberty hovers over us. Woe to the Royalists, war to tyrants, peace to the cottages and LONG LIVE THE REPUBLIC”.

Posted by Olga Kerziouk at 2:42 PM