As the eyes of the racing world turn towards Royal Ascot this week, we may reflect that the British fascination with horse-racing is far from new. ‘Every year, the people of Jersey and the English feel the need to organize races,’ remarked Adèle Hugo in 1855. The circumstances in which she witnessed this phenomenon were not, perhaps, those which she might have wished, but her observations remain sharp and witty.

Life is not always easy for the children of famous writers, especially girls. We may recall the daughters of John Milton, diligently copying out their father’s work as his sight faded, or the tribulations of Dora Wordsworth and Sara Coleridge, described by Katie Waldegrave in The Poets’ Daughters (London, 2013; DRT ELD.DS.199292). Subjected to their fathers’ eccentricities, overbearing authority or intermittent neglect, they also suffered from the restrictions imposed on women of talent and spirit by the conventions and expectations of 19th-century society. When these were compounded by the disruption to family life resulting from a father’s political views, the outlook could be grim indeed. 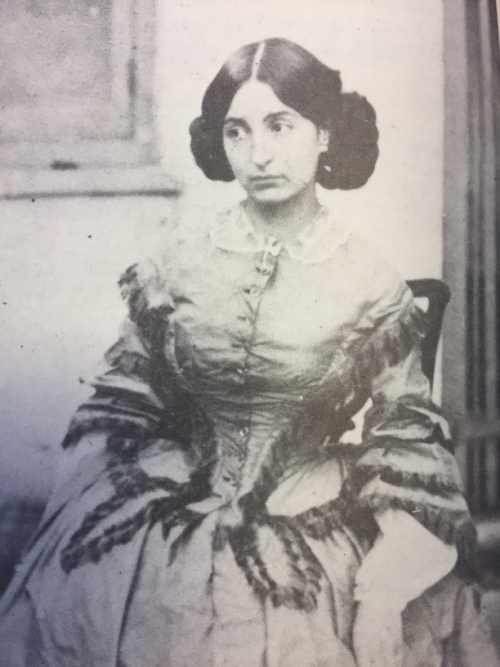 Such was the situation of Adèle Hugo. She was born on 28 July 1830, at the time of the fateful events leading to the overthrow of Charles X, and political turbulence was to mark her passage through life. Her early life was comfortably affluent; the youngest of the family, she grew up with her sister Léopoldine and brothers Charles and François-Victor in a cultured home where her talent for music was fostered. However, she never ceased to be aware that Léopoldine was her father’s favourite, and the feeling of inferiority was deepened when in 1843 the newly-married Léopoldine and her young husband drowned in a boating accident. Victor Hugo never recovered from the loss, which he explored in some of his most impassioned poetry.

His emotional suffering, however, did not prevent him from engaging in political activity as a pair de France and Member of Parliament, and penning outspoken pamphlets in which he opposed the death penalty and attacked Louis Napoleon’s seizure of power. In protest at the anti-parliamentarian constitution of 1851 Hugo left France, first for Brussels, then for Jersey, and finally for Guernsey. 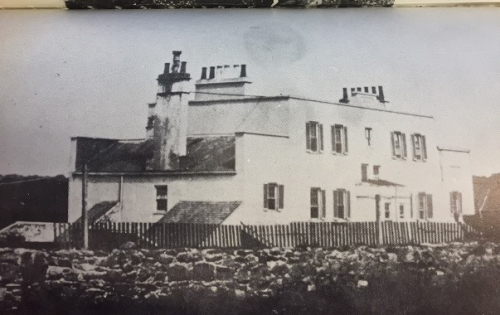 At the time of her father’s decision to leave France Adèle was 21, and the relocation occurred at a point when she might reasonably have been expecting to marry and establish a position in Parisian society. Instead, she found herself living on a remote island whose social life did not provide the diversions and company to rival that of the City of Light. Nevertheless, in her diary she proved an apt and observant chronicler and critic of the circles in which she was obliged to move. 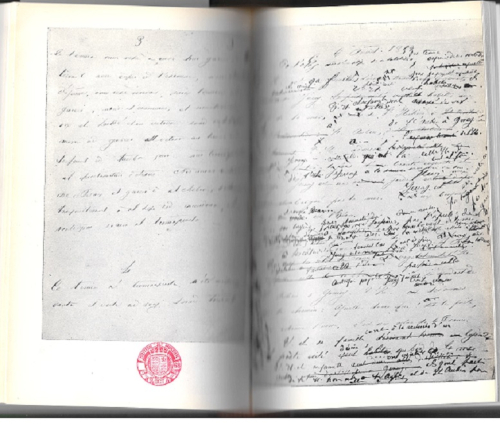 Among the amusements on offer were the races which she describes in her journal for June 1855 under the heading ‘Les Courses de Jersey’. Three months in advance posters could be seen advertising ‘Jersey Races: Cup de la Reine’, giving the local belles plenty of time to prepare their outfits: ‘delicious sky-blue hats’ worn with ‘superb green dresses (a ‘fashionable’ style only for the countryside)’ she remarks tartly, going on to describe ladies whose costumes of red, green, and yellow gave them the appearance of splendid parrots, topped off with ‘provincial marabou and diadems in artificial velvet, worthy of adorning the brow of a princess of the blood royal, and consequently in poor taste. It is not a steeple-chase for horses; it is a steeple-chase for women’. She gleefully notes the subterfuges of an Englishwoman who affects extra-long skirts to conceal her big feet, while another goes to the other extreme to display a skinny leg which she mistakenly believes slender. 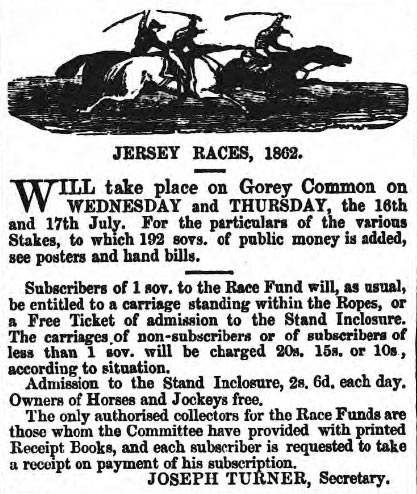 As for the jockeys, she mocks them as ‘awful cretins, which provides the somewhat curious spectacle of donkeys on horseback’. Watching them from the grandstand are the young men belonging to the clubs: ‘beaux, English dandies, cretins, collectors of cretinous cravats, surmounted by side-whiskers (usually red). Here is the menagerie: geese, turkeys, ducks and donkeys assuming the names of lions, tigers and jackals’, braying and neighing in a cloud of malodorous breath as they place their bets:

“Look – a shilling (26 sous) if so-and so comes in with so-and-so,” says a lion, squeezed into an implacable suit.
“No,” replies a tiger, his neighbour, with an insurmountable stove-pipe of a hat on his head, and afraid of losing his 26 sous, “I’m not betting.”

Below the grandstand is an area where the visitors’ carriages are stabled; ‘from time to time starving horses try to gobble up a spectator, taking him for hay’; while above, Hugo’s fellow-exiles parade and an English officer, ‘the rossable Major Ross’, jockeys for position with the Hungarian General Perczel and comes off the worse. Alarmed at the prospect of a duel and possibly fighting for the first time in his life, the ‘false major’ apologizes profusely to the ‘genuine general’ and creeps away. Those who know Adèle Hugo chiefly through Isabelle Adjani’s portrayal of her in François Truffaut’s film The Story of Adèle H. (1975), crossing the Atlantic in desperate pursuit of yet another officer, the perfidious Lieutenant Pinson, may be agreeably surprised by the Jane Austen-like acuity of her diaries. She outlived her father, dying in 1915 in the asylum where she had been under treatment for schizophrenia. Painfully frustrating as her life may have been, it could not extinguish her capacity to express herself with piquancy and perception.