Ernst Friedrich and his War against War

In 1924 the German pacifist Ernst Friedrich published the first edition of one of the most powerful anti-war books of the 20th century. Krieg dem Kriege! = Guerre à la guerre! = War against war! = Oorlog an den oorlog! consisted mainly of photographs depicting the destruction wrought by the First World War, with captions in German, French, English and Dutch. 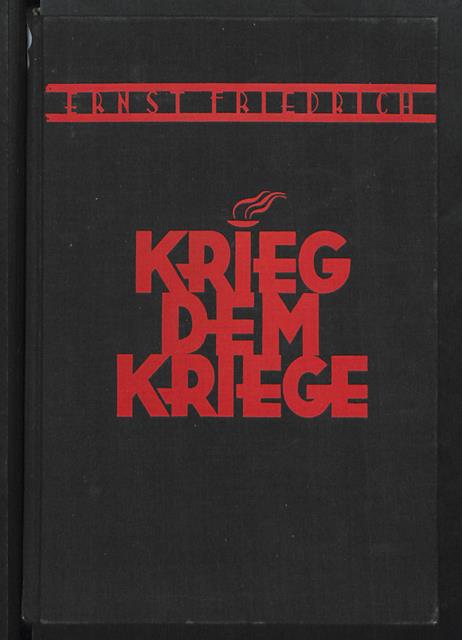 Friedrich came from a large working-class family – one of 13 children. He trained as an actor, making his stage debut in his native Breslau (now Wrocław) in 1914, but his career was cut short by the outbreak of war. As a conscientious objector he spent most of the war first in an asylum and later in prison. In the 1920s he became active in both socialist and anti-militarist groups, and Krieg dem Kriege reflects both tendencies.

The book opens with an address – again in all four languages – to ‘Human beings of all lands,’ in which Friedrich sets out his purpose: to ‘paint correctly this butchery of human beings’ in ‘records obtained by the inexorable, incorruptible photographic lens.’ While he blames capitalism for war, he also states that ‘it is … proletarians that make the conduct of war possible’ by agreeing to fight on behalf of their oppressors. He calls on men to refuse to serve and parents to bring up their children without military toys, games and songs, which ‘mobilise the child for the war idea.’ 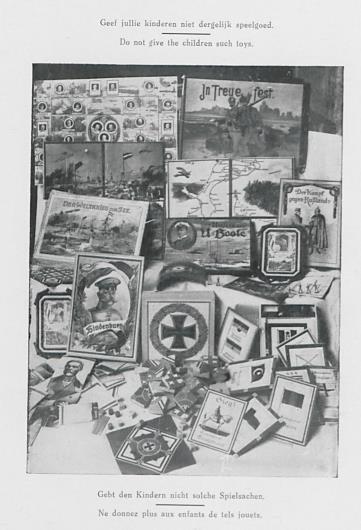 The pictures that follow are accompanied by sometimes ironic captions: a photograph of a burnt and mutilated corpse is captioned, ‘A “meritorious” achievement’, while two rotting skulls are set against a quotation from Kaiser Wilhelm II, ‘I lead you towards glorious times.’ Sometimes images are juxtaposed, for example a posed studio portrait of a uniformed soldier aiming his gun (‘The pride of the family’) with the bloody corpse of a shot infantryman. Other juxtapositions place the comforts enjoyed by officers and royalty against the suffering of ordinary soldiers, or show how the higher ranks are commemorated with taller or grander memorials than the lower, maintaining class distinctions even in death. The devastation wrought on landscapes and towns is also shown. 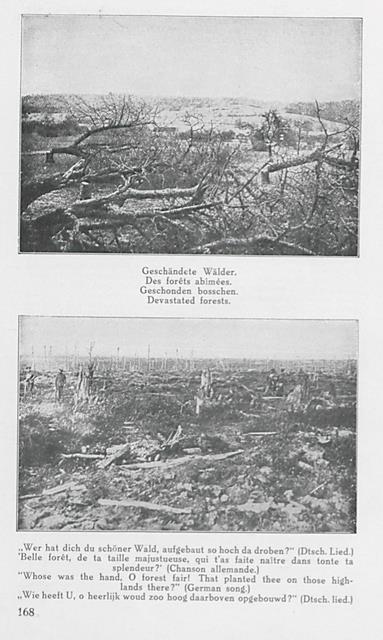 But most images stand alone with straightforward captions, showing the terrible reality of mass slaughter on a scale never before seen. Some of the most famous show severely mutilated soldiers – most notably a man with the whole lower half of his face destroyed – and maimed veterans back at menial work or begging for money. Friedrich seldom defines the wounded or dead in these pictures by nationality, forcing the reader to see them all as fellow-humans rather than compatriots, allies or enemies. 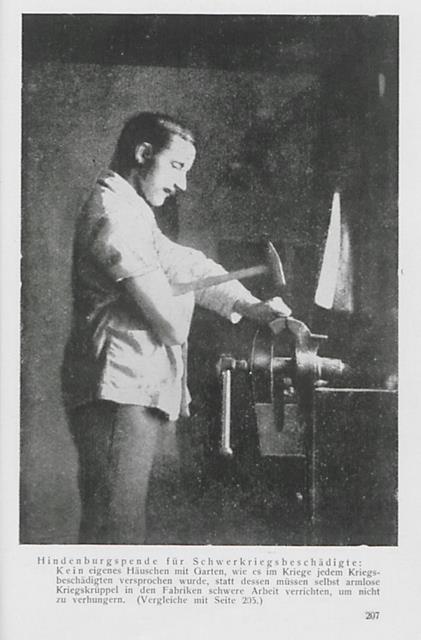 A wounded ex-soldier at work. The opposite page shows an aristocrat enjoying a post-war yachting holiday.

The book ends with an appeal for contributions to an ‘International Anti-War Museum’ which Friedrich opened in Berlin in 1925. Like the book, the museum sought to illustrate the true horrors of war and to encourage pacifist and antimilitarist education. 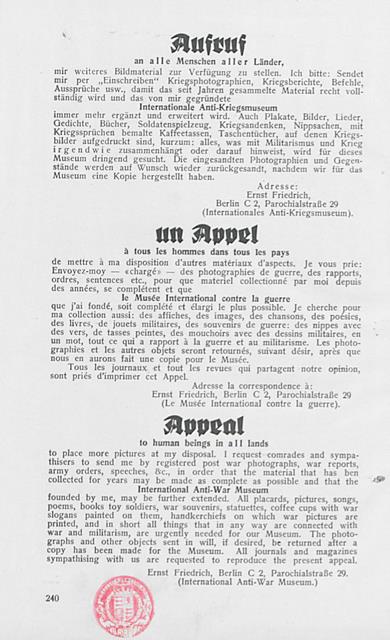 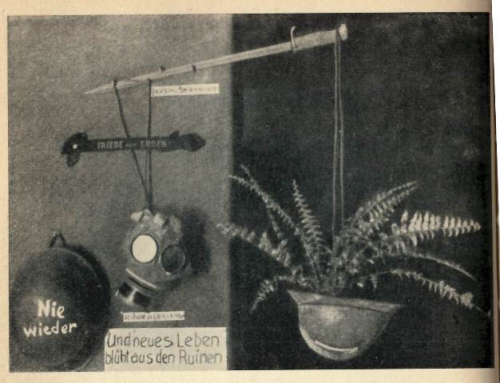 Friedrich continued to campaign against war and for greater social justice, but even in the supposedly tolerant era of the Weimar Republic his publications were frequently banned and he was jailed for his political activities in 1930. He and the museum were early targets for the burgeoning Nazi movement; once the Nazi were in power, Friedrich was swiftly arrested, the museum was destroyed and the building was turned into an SA clubhouse. 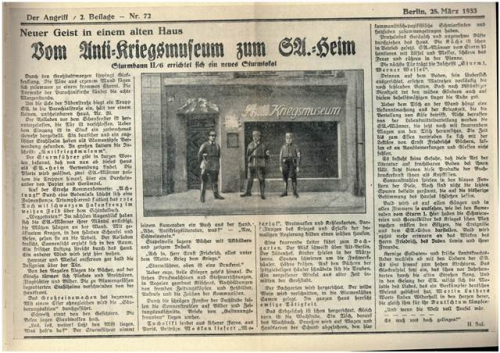 An article from the Nazi newspaper Der Angriff celebrating the Anti-War Museum’s change of use, reproduced in Vom Friedens-Museum - zur Hitler-Kaserne

On his release, Friedrich left Germany. In 1935 he published an account of the museum and its fate, Vom Friedens-Museum – zur Hitler-Kaserne, in the name of the ‘Interational Committee for the Re-establishment of the Peace Museum’. In 1936 he was able to reopen the museum in Brussels, but it was once again destroyed when Belgium fell to the Germans in 1940. After some months of internment in France, Friedrich escaped and joined the French resistance. He was involved in saving a group of Jewish children from deportation and, despite his pacifism, took part in the battles to liberate Nîmes and Alès and was twice wounded.

Friedrich remained in France after the Second World War. Attempts to re-create the museum were unsuccessful, but compensation payments for his suffering under the Nazis enabled him to buy first a ‘peace barge’ and later a small island in the River Seine, which he named the ‘Ile de la Paix’ and where he established an international youth centre for peace and reconciliation. 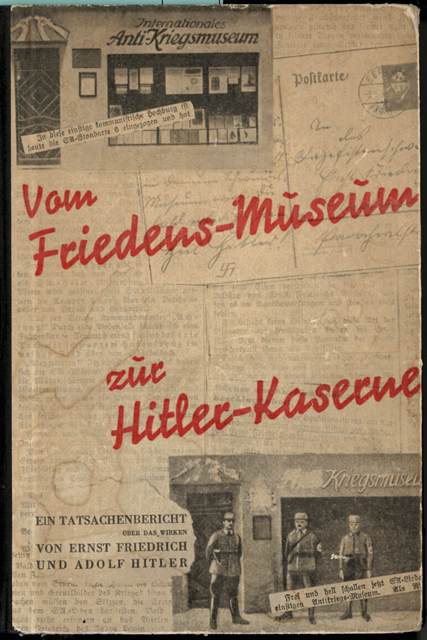 After Friedrich’s death in 1967 the island was sold and the centre pulled down. However, his work lives on. In 1982 a new Anti-War Museum opened in Berlin. The museum continues to highlight the brutality of war, and has also reissued both Krieg dem Kriege and Vom Friedens-Museum – zur Hitler-Kaserne. Both museum and books remain as a worthy tribute to a man who devoted his life to the cause of peace.

The British Library’s copy of Krieg dem Kriege is currently on display in the exhibition Aftermath: Art in the Wake of World War One  at Tate Britain, which runs from 5 June to 23 September 2018.