From Sokol to Symbolism: the short life of Karel Hlaváček

The tragic figure of the frail poet dying prematurely of consumption is one which haunts European literature from Keats to Jiří Wolker. Yet there can be few less likely candidates for this role than the Czech poet Karel Hlaváček. He was born into a solidly working-class family in Prague on 29 August 1874, the son of Josef Hlaváček and his wife Antonie. Bright and talented, the young Karel was educated at the high school in the Karlín district of Prague, where he became a keen member of the Sokol movement, founded in 1862 by Miroslav Tyrš and Jindřich Fügner. Ostensibly an organization aiming to promote physical fitness through gymnastics, this actually served as a cover for patriotic activities and provided a focus for national feeling among young Czechs under the oppressive regime of the Austro-Hungarian Empire. Such was his enthusiasm that he was one of the founding members of a new branch of Sokol in his home district of Libeň and was chosen as its president.

Hlaváček’s parents could not afford to send him to university full-time, but he was able to attend lectures as an external student, and spent two years studying modern languages in this way. French held a particular attraction for him, and he soon became acquainted with the work of French Symbolist and Decadent writers including Rimbaud, Baudelaire, Verlaine and Mallarmé. At the same time his gifts as an artist were rapidly developing. His drawings and prints revealed his fascination with the morbid and demonic, including studies of devils, malevolent fauns and other supernatural beings. This made him a natural illustrator of works by authors who were in tune with the spirit of Decadence, including Arnošt Procházka, Otokar Březina, Jiří Karásek ze Lvovic and Stanisław Przybyszewski, as well as of his own poems. He had applied to the School of Applied Art (Uměleckoprůmyslova škola) in Prague, but predictably failed to gain admittance, and in fact never settled to any fixed occupation.

A fine physical specimen thanks to his Sokol training, Hlaváček was called up for his compulsory military service and despatched to serve in Trento in northern Italy in 1895. For the last two years he had been writing for the official Sokol magazine and in 1895 had acted as an organizer and publicist for the third pan-Sokol assembly in Prague. Although his departure for Trento interrupted this, it brought him into a new environment which confirmed his belief in the value of international contacts and active cooperation with writers of other nations on equal terms. It was also where he contracted the tuberculosis which was to kill him.

Hlaváček crystallized his ideas on this subject on an essay entitled ‘Nacionalism a internacionalism’, published in Moderní revue V (1896). He considered that Czech authors could only benefit from the spirit of internationalism, which would not dilute their Czech identity but would strengthen it. He had been contributing to this periodical (Prague, 1895-; P.P.4835.ub.) from its inception, and in doing so worked closely with some of the leading Czech literary figures of the fin-de-siècle, among them Antonín Sova, producing portraits and vignettes as well as illustrations.

His own first collection of verses, Sokolské sonety, came out in 1895, although he was later to repudiate it as his efforts to express Tyrš’s ideals in verse gave way to more daring experiments. Inspired by a collection of modern French poetry in translation published by Jaroslav Vrchlický (Prague, 1893; 1608/3839), he began to adapt the spirit of Symbolism and Decadence into Czech. In Pozdě k ránu (‘Late towards morning’; 1896), he created melancholy verses aiming to suggest the deep musical tones of the drum or viola, accompanied by his own illustrations in the spirit of Félicien Rops  and Edvard Munch. 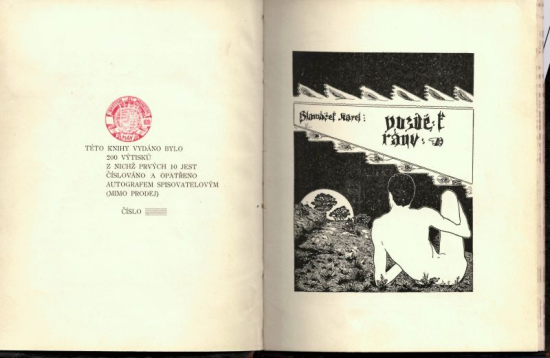 The book subsequently inspired illustrations by other artists, including a series of lithographs by Karel Štik for a limited edition published to mark the 50th anniversary of Hlaváček’s death. The British Library’s copy, signed by the artist, includes a powerful portrait of the poet himself. 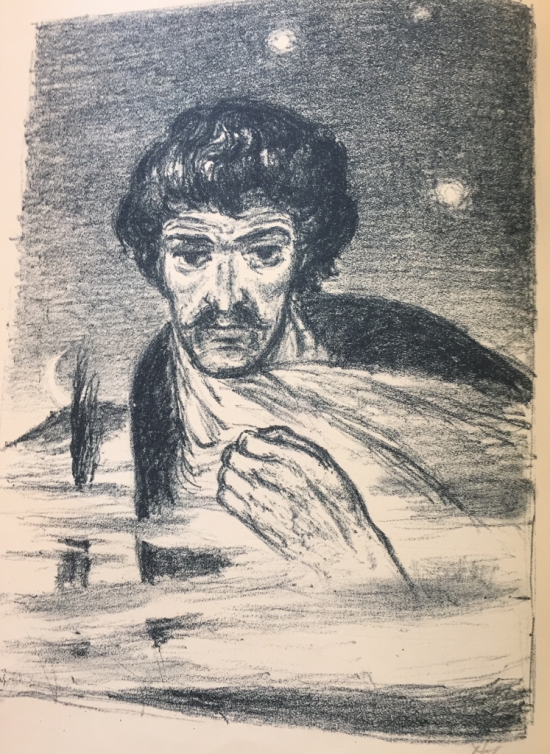 In 1898, the year of his death, Hlaváček published one of his most famous works, Mstivá kantiléna (‘Vindictive cantilena’), widely regarded as the most significant verse work of Czech Decadent literature. Though comparatively short, it encompasses a wide range of European cultural references, including the Abbé Prevost’s Manon Lescaut and the Dutch Anabaptist rebels known as the Geuzen or Gueux, conjuring up a synaesthetic world of failed rebellion, bells which cannot ring, and legends of ‘the sin of the yellow roses’, ‘the moon which went blind through long weeping’ and ‘the beautiful dolphin’. Like his earlier poem ‘Upír’ which portrays an aristocratic vampire flitting through Prague and sorrowing as he plunges down on his pure victims, it captures the resonances of Decadence in a uniquely Czech fashion by exploiting the rhythms and resonances of the language. 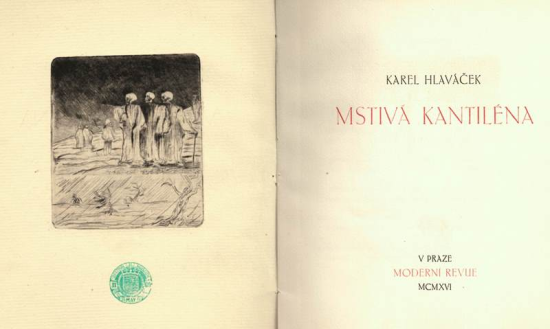 In that same year Hlaváček’s condition worsened and he died on 15 June 1898, just two months short of his 24th birthday. His contribution to Czech literature far exceeds the modest compass of his published work in the inspiration which it gave to those who would go on to build up links between the rest of Europe, especially France, and a country which just 20 years later would achieve not only cultural but national independence.