Ever-present in the cultural imagination of Danish history, the story of Johann Friedrich Struensee — beyond the soap-opera of his rise to power — was a turning point in the history of publishing. The legacy of this Danish episode has been invigorated by the likes of Per Olov Enquist, in his 1999 novel Livläkarens Besök (The Visit of the Royal Physician), and Mads Mikkelsen, who portrayed the once de facto ruler in Nikolaj Arcel’s 2012 film En kongelig affære (A Royal Affair). 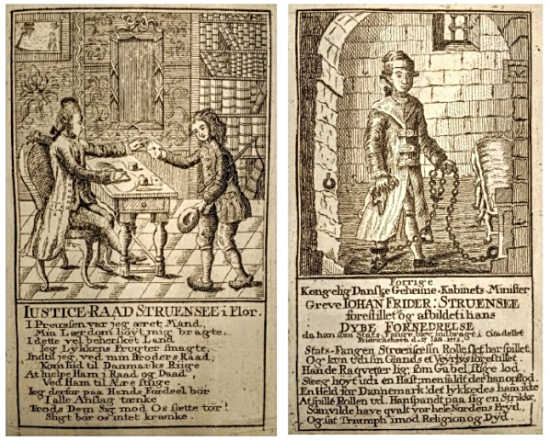 Engravings showing Struensee in charge and then in prison, from a collection of broadsides on Struensee and his downfall. (1881.b.46)

Struensee had accompanied King Christian VII as royal physician on a foreign tour in 1768 and had gained the trust of a regent prone to serious psychiatric episodes. Soon, not only had the doctor risen to become the King’s most trusted advisor in the Danish court, he had also become Queen Caroline Matilda’s lover – which fast became common knowledge. With the ear of the King, Struensee first appointed himself to the Privy Council before dismantling it in favour of a Cabinet in his control, supported by his ally Enevold Brandt. The increasing incapacity of the King gave Struensee the authority to pursue an Enlightenment agenda, which he did by issuing nearly 2000 decrees in his 16 months in power. This ground-breaking transformation in politics ruptured the link between King and people, and in its place offered the liberalizing but authoritarian rule of a non-Danish-speaking upstart. No matter how forward-thinking the legislation, Struensee would always be a German usurper, who had corrupted the royal court.

The very first of Struensee’s reforms was to declare the freedom of the press on 14 September 1770. Immediately, this freedom led to the creation of many new periodicals and newspapers, while also encouraging provincial printing beyond Copenhagen. 1771 saw pamphlets shift ‘in character from a debate on socio-political issues to direct criticism of those in power’ and often ‘the criticisms took the form of lampoons on the themes of sex and power’ (Horstbøll). Struensee took the brunt and so his introduction of the freedom of the press resulted in the use of the press against him. 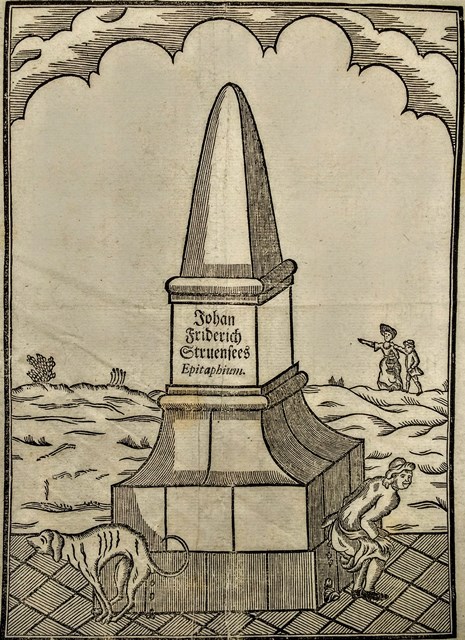 A defaced memorial for Struensee but a memorial all the same, which might go some way to depicting his divided legacy.

As Jesper Mølby puts it in Robert Ferguson’s Scandinavians:

In some ways the most depressing part of it all is that Struensee gave people freedom of expression, and for the most part all anyone did with it was compose endless vulgar and offensive verses directed at Struensee himself and his affair with Caroline. In his bright and visionary Denmark people had been set free to express exactly what they felt and thought, to educate one another, criticize one another constructively, to fearlessly challenge the high and mighty. What he got instead was a society of proto-internet trolls. Shit. Piss. Fart. Willy. The king’s a nutcase. (Ferguson, pp. 153-154)

On 17 January 1772, Struensee and Brandt were arrested for usurping royal authority – the birth of Struensee’s and Caroline Matilda’s daughter, Louise Augusta, couldn’t have helped his case. In the three months during his imprisonment, illustrated broadsheets quickly distributed the popular criticism and hatred of the Counts Struensee and Brandt. The British Library has a collection of these broadsides, along with some leaflets and smaller single-sheet engravings. 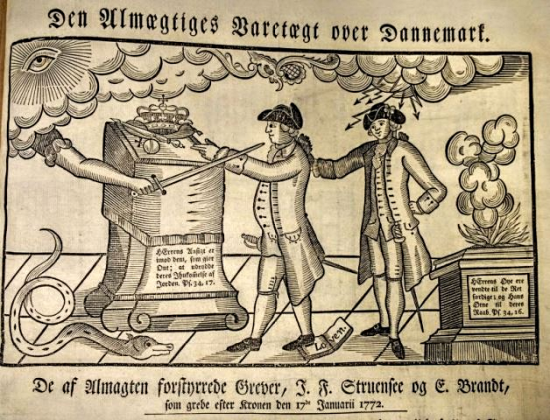 The Almighty steps in to reclaim Denmark from the power-grabbing Struensee and Brandt.

Eventually charged and sentenced to execution on 28 April 1772, Struensee and Brandt had their right hands cut off, then their heads and even genitals, before being drawn and quartered, each body part displayed for the audience, as is shown in the broadsheet below. Horstbøll confirms that the ‘theatrical execution of the count and the exhibition of his corpse’ was ‘the greatest sales success of all’ for its printer, Johan Rudolph Thiele, whose woodblocks were copied by many others. 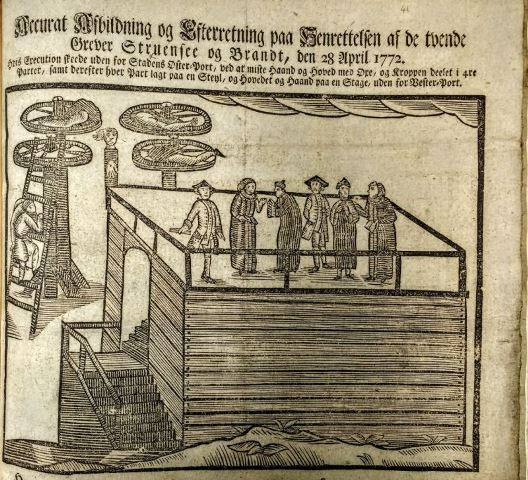 ‘An accurate view of the execution of the Counts Struensee and Brandt’. The fourth quarter of Struensee’s body is being carried up to its display wheel.

Many of Struensee’s decrees were reversed following his execution and post-publication censorship returned on 20 October 1773. However, the floods of empowered publishers and voices could not be held back. A new publishing energy had been unleashed and the landscape was unalterably changed. As Henrik Horstbøll writes, ‘The period of the unlimited freedom of the press broke the bonds linking printed media to the institutions of the state and a new print culture arose in relation to the traditional literary market, which could not be reversed once freedom of the press became limited again.’

Struensee’s legacy remains therefore divided, as Michael Brengsbo suggests, between those who view him as ‘a cynic usurper, seducer, and fortune hunter’ those who remember ‘a tragic hero who really tried to enlighten the people and improve their lot […]’.