It’s been food season for the last 2 months at the British Library and sweeping through the Nordic collections with a gastronomic lens, there is of course only one thing on the menu: herring. The herring has formed the backbone of societies over the ages and, as Jonathan Meades says in his jaunt across the Baltic coast of continental Europe, Magnetic North, the herring’s own backbone has formed an even more literal foundation:

When excavations are made in Flanders for roads and railways, the bones of men slaughtered in the First World War constitute the first stratum that the diggers encounter. Further down are multitudinous herring skeletons. The people of Arras ate between two and three million herrings per year. That’s two to three hundred per every person.

From the material ubiquity of herring springs the idea or symbol of herring; it is not only the most important driver of socio-historical and political in the story of Northern Europe but it also stands for the cultural identity of the North.

Herring has really always been fished, well, ‘since the Mesolithic era but commercial fisheries for these species developed only in the Middle Ages’ (Holm, p. 19). Its abundance in the marine area stretching from the Baltic across the North Sea and to the Atlantic around Iceland made it a vital commodity traded and controlled by various powers across the centuries. Abundance may be an understatement if we take Saxo Grammaticus’s words at face value in the Gesta Danorum, first written around 1204. Writing of the sound between Zealand and Scania, he notes: ‘the whole sound contains such plentiful shoals that sometimes boats striking them have difficulty in rowing clear and no fishing-gear but the hands is needed to take them.’ In fact, one possible etymological root for the word herring is from the Germanic Heer (army, troops) but the etymology of the common name for Clupea harengus is full of red herr… I won’t go there. 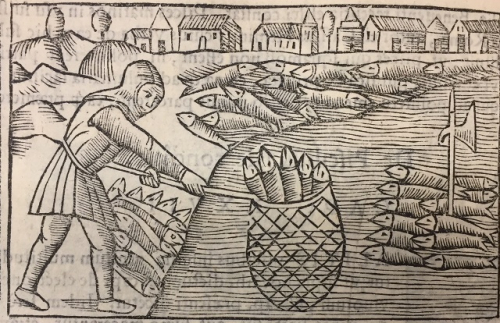 It goes without saying then that with such a central presence in Northern life the herring is equally abundant in the Northern literary and artistic imagination. A scan of the British Library catalogue reveals a huge number of historical surveys, reports on methods of preservation, regional studies of the impact of fishing, but also such oddities (or not) as an announcement in 1785 by the Swedish Academy pertaining to, in the gloss provided by the BL’s Scandinavian Short-Title Catalogue of works published before 1801, ‘roof slates and herring fisheries’ (British Library, Ac.1070/20), or even the very recent (anti-)comic book by Antti and Esa Hakala, Sven’s Herring, or their graphic novel Lord of Herrings (2017). Douglas S. Murray’s comprehensive Herring Tales: how the silver darlings shaped human taste and history (London, 2015; DRT ELD.DS.80434) points us in the direction of a museum on the topic, “one of the finest of its kind”, namely the Herring Era Museum in Siglufjörður on the Northern coast of Iceland, once the bustling centre of herring fishing and processing in the country, the ‘Atlantic Klondike’ of the early 20th century. Murray sees in this unique museum a reminder of “the fact that without herring, Iceland – like so many other places on the edge of Norway, Scotland and elsewhere – would not have possessed a modern society.” The museum itself is fully aware of the historical, literary, artistic, film and musical impact of herring, listing numerous sources that show the expanse of work that sparkles herring-silver. 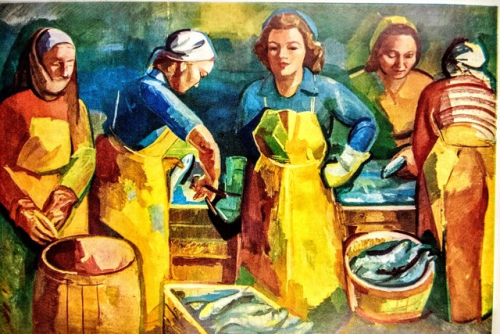 A three-volume history of herring in Iceland, Silfur hafsins: gull ĺslands: síldarsaga ĺslendiga (‘Silver of the sea: Iceland’s gold: the history of herring in Iceland’; Reykjavik, 2007; YF.2014.b.1514) has appeared in the last decade, adorned with epigraphs by the great Nobel Prize winner and herring champion Halldór Laxness. All three epigraphs are from Laxness’s 1972 Guðsgjafaþula (Reykjavik, 1972; X.989/30910.), which loosely translates as ‘The Song of God’s Gifts’—the book has not been translated into English. “God’s gifts” is another euphemism for the now not-so-humble herring and Laxness does not shy away from elevating them to an object of the aesthetic sublime:

‘… þá munu margir men tala að þessi fagri fiskur hafi verið sannkölluð dýrðargjöf, já ein sú mesta sem himnafaðirinn hefur gefið þessari þjóð.’
[… then many will say that this beautiful fish has been the true glory, yes, one of the greatest things the Heavenly Father has given this nation.]

Guðsgjafaþula, about the fate of a fishing community who have entrusted their lot to a brilliant herring speculator, took as its source material the first history of herring in Iceland written by Matthías Þórdarson from Móar in 1934. The latter was the great-grandfather of contemporary Icelandic great, Sjón, who in turn used his ancestor as a model for the protagonist of the novel Argóarflísin (‘The Whispering Muse’; Reykjavik, 2005;YF.2007.a.24658). In Sjón’s novel we are introduced to Valdimar Haraldsson, who in 1933 published Memoirs of a Herring Inspector, immediately evoking Laxness and Þórdarson before him. One of Haraldsson’s early articles from his journal Fisk og Kultur, to which he refers at length at the beginning, espouses the link between fish consumption and Nordic racial superiority:

It is our belief that the Nordic race, which has fished off the maritime coast for countless generations and thus enjoyed a staple diet of seafood, owes its physical and intellectual prowess above all to this type of nutrition, and that the Nordic race is for this reason superior in vigour and attainments to other races that have not enjoyed such ease of access to the riches of the ocean.

The triumphal racialist rhetoric is antiquated and self-undermining in the context of the novel but the year of publication of Haraldsson’s memoirs is not lost on the reader. God’s gifts make for a chosen people it seems. At the same time, the maritime Nordic people is deliberately drawn in stark contrast to the ‘blood and soil’ rhetoric of continental fascism. Sjón’s novel is not the only place where fish and racial politics are brought into conversation. For the other notable example, we need to travel back to the Baltic and the shores of Danzig as imagined and lived by Günter Grass. But that is for another post…