The Reign of Terror ends

The bright dawn of the 1789 French Revolution did not last. By 1790 the Jacobin club (meeting in the Rue St Jacques) led by Maximilien Robespierre was the dominant political club in the country. It was more influential than the club of the Cordeliers (which met in the convent of the Cordeliers) led by Georges Jacques Danton, Jean-Paul Marat, Camille Desmoulins and Jacques Hébert. 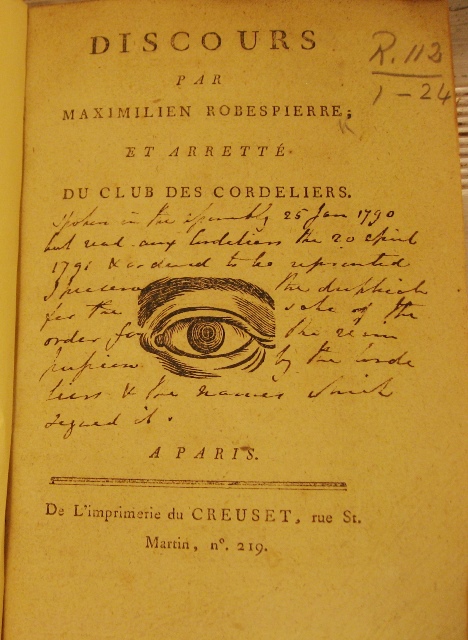 The Legislative Assembly of 1791-2 consisted of the Plain – moderate republicans or monarchists who were influenced by the Girondists (from Gironde) – and the Mountain – those seated in the highest part of the hall, who were the most radical and included members of the Jacobin and Cordelier clubs.

In April 1792 the French declared war on Austria. That August the Tuileries palace was stormed by the Paris mob. The Provisional Government, with Danton as Minister of Justice, did nothing to prevent the September massacre of prisoners. In the same month the monarchy was abolished and 22 September became the first day of Year 1. On 21 January, 1793, Louis XVI was executed. In prison he had frequently read accounts of the execution of King Charles I of England in January 1649. 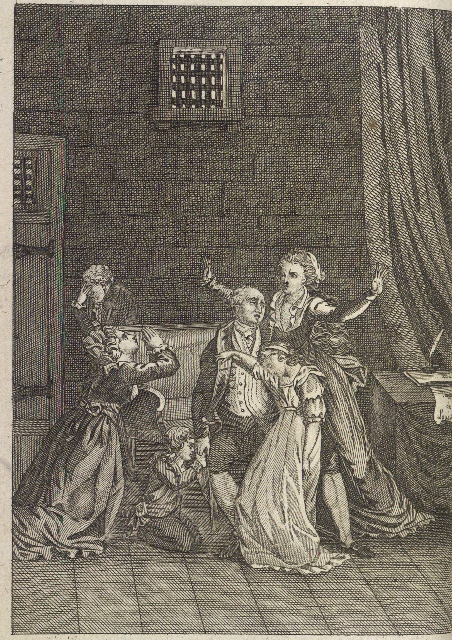 In April 1793 the Committee of Public Safety was formed. It included Danton, Robespierre and Saint-Just. In the years 1793-4 Robespierre came to dominate the government and massacres occurred in the regions. The Reign of Terror had begun. Philippe Égalité, formerly the Duc d’Orléans, the former King’s cousin, was executed on 6 October 1793. Marie Antoinette was executed on 16 October. Olympe de Gouges, a lively dramatist and writer in favour of women’s emancipation, was enthusiastic for the Revolution but denounced the Terror. She was tried on 4 November and executed the same day. Madame Roland was executed on 9 November, pausing before a statue of Liberty to cry out “Oh Liberty, how many crimes are committed in your name.” She had said farewell to her best female friend at a pre-arranged spot on her route to the scaffold to spare her the sight of her execution. Louis XVI had similarly spared his valet and friend Cléry this last painful duty. Monsieur Roland, also condemned, had escaped to Rouen, but on hearing of his wife’s death, committed suicide. Olympe de Gouges had written that women were not allowed the vote yet were considered responsible enough for their actions to be executed. There were many more humble victims than aristocratic ones, as people paid off old scores by denouncing people they disliked. 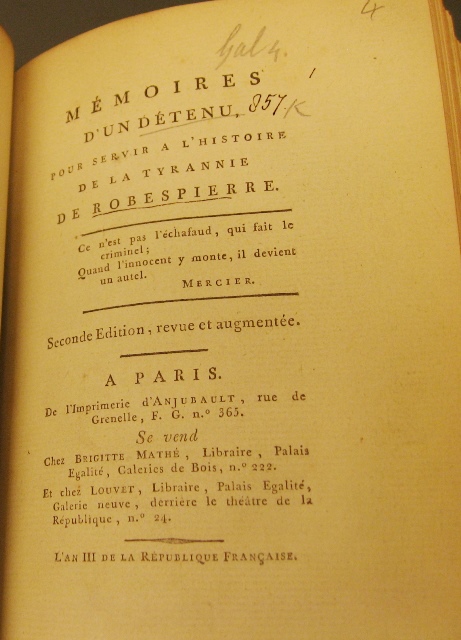 In November the worship of God was abolished and replaced by the Cult of Reason. Churches were closed. Danton and Desmoulins were executed on 5 April. In July a conspiracy against Robespierre lead to his and those of his younger brother, and his supporters Georges Couthon and Antoine Saint-Just, who was only 26. They were arrested on 27 July (9 Thermidor). They were released by friends but surprised at the Hôtel de Ville and executed the next day (10 Thermidor). Other colleagues followed them to the scaffold. The plotters were forced by public opinion to moderate their policies and the Reign of Terror was ended. The anonymous tract Portraits exécrables du traître Robespierre et ses complices begins with a description of Robespierre. He is 5 pieds (feet) 3 or 4 pouces (literally thumbs or inches) tall, smart, with a lively step, a brisk manner, wringing his hands nervously, his hair and clothes elegant, his face ordinary but fresh in colour and a naturally harsh voice. His discourse was sharp, and he argued clearly. (He had trained as a lawyer.) He was proud and sought glory; often bold he was sometimes vindictive. He was chaste by temperament. He liked to attract women and sometimes had them imprisoned so he could free them. He also liked to instil fear into part of the Convention. He had a would-be assassin killed. 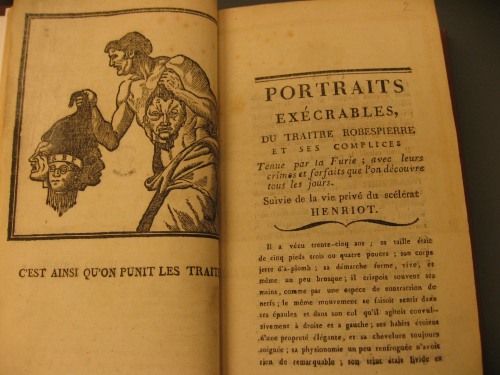 After his arrest, when he saw himself abandoned by his allies, and Couthon badly injured, he shot himself and was seriously but not fatally injured in the jaw. He was found on the floor. Couthon was dead but Robespierre was just about alive. He was mocked by those around him. Saint-Just, and two of his supporters (Claude) Payan and (René - François ) Dumas were brought in. Dumas was distracted, Saint-Just humiliated and Payan defiant and then fearful. Dumas asked for water which was given to him. A surgeon bandaged Robespierre’s injuries. The execution is not described except to say that after the execution the clothes of the victims were hardly disturbed although blood-stained.