A Right Royal Gift Book: ‘The Wedding at Windsor’

On 26 and 27 April 2018, the British Library and the National Portrait Gallery played host to scholars and members of the Anglo-Danish Society who gathered together to learn about the portraits and patronage of five fascinating royals: Anna of Denmark (1574-1619), Queen Consort to James VI and I; George of Denmark (1653-1708), Prince Consort to Queen Anne; Louisa of Britain (1724-1751), Queen Consort to Frederik V of Denmark and daughter to George II; Caroline-Mathilde of Britain (1751-1775), Queen Consort to Christian VII of Denmark and sister to George III; and Alexandra of Denmark (1844-1925), Queen Consort to Edward VII. Two very special British Library items that were shown as part of the event are detailed in two blog posts. First, Dr Sara Ayres, the event organiser and formerly Queen Margarethe II Carlsberg Foundation Postdoctoral Fellow at the National Portrait Gallery, takes us back 150 years to a very familiar occasion.

Following the excitement swirling around the marriage of Prince Harry and Meghan Markle (now the Duke and Duchess of Sussex) in May of this year, it is perhaps as good a moment as any to cast a glance back into the past upon another royal wedding, which brought another beautiful bride over the sea, to marry a son of Queen Victoria. The groom was Albert Edward, Prince of Wales (later King Edward VII) and the bride, Princess Alexandra of Denmark. The Princess’s carriage ride through London on her way to Windsor Castle to prepare for her marriage in St George’s Chapel on 10 March 1863 was attended by a riotous outpouring of popular celebration. Indeed, the Victorian crowds which surged to meet this Danish bride were more numerous and rather less orderly than the waving well-wishers lining the televised procession of Saturday 19 May 2018. 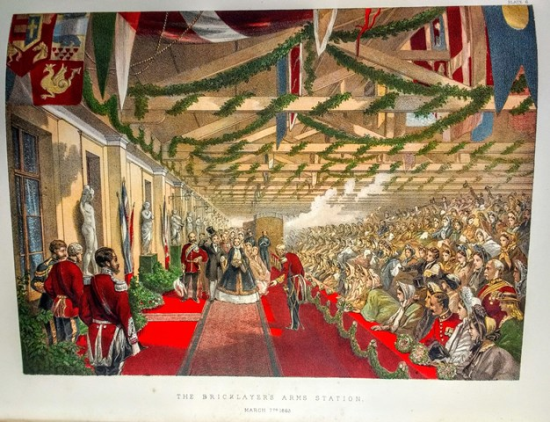 A respectful audience for the arrival of the new Queen at the old Bricklayers’ Arms Station. From The Wedding at Windsor: A Memorial of the Marriage of ... Albert Edward, Prince of Wales and ... Alexandra, Princess of Denmark (London, 1864) 1754.d.32

Both the marriage and the Princess’s landing at Gravesend and royal entry into London were commemorated in a lavish volume entitled The Wedding at Windsor. The text was crafted by none other than William Howard Russell, a veteran journalist who had won fame, if not fortune, reporting on the Crimean War for the London Times. This heavy folio volume is richly illustrated with chromolithographs of the procession, the wedding and the many, lavish bridal gifts. It is these beautiful prints designed by the artist Robert Dudley and realised by lithographers to the Queen, Messrs. Day and Sons, which lift this official publication out of the ordinary and into the realms of print history. 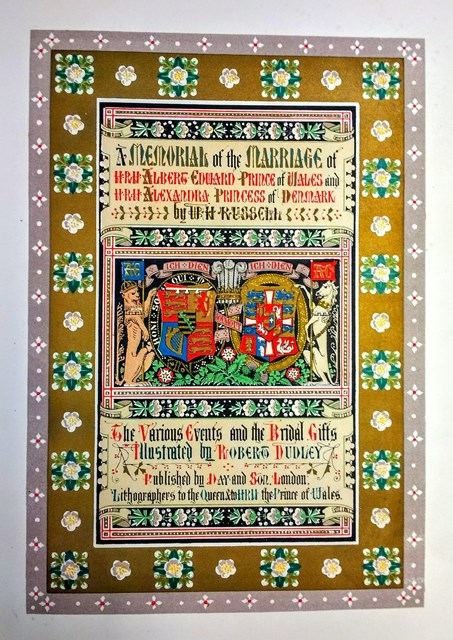 Title Page from The Wedding at Windsor

Chromolithography occupies a brief and singular moment in the history of colour printing, quickly eclipsed by the rise of fully automatic processes for mechanical reproduction. Chromolithography demanded expertise; its processes were minutely analysed by the printer’s eye and aligned by hand, and used as many colours as the client’s means afforded. The application of such intensely focused skill produced results with an extraordinary sense of material presence. Dudley’s illustrations of the wedding gifts seem almost to vibrate off the page, their intense reality effect investing the precious objects with a second life inside the book. 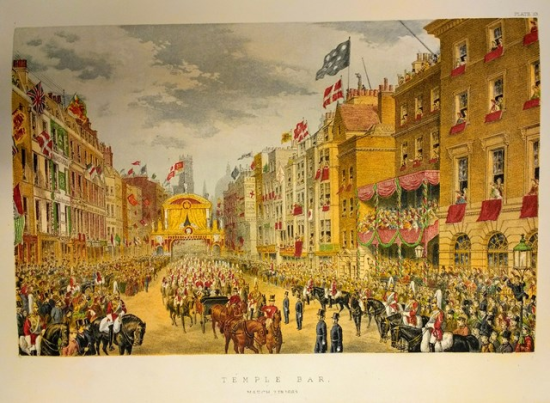 Crowds line the streets at Temple Bar, the Union Jack flyring side by side with the Dannebrog

Dudley’s illustrations of the procession of 7 March 1863 fascinate with their detail of the ephemeral decorations which lined the Princess’s route. Triumphal arches, countless flags, royal portraits and allegorical sculptures recreated the most famous thoroughfares of London as heraldic heterotopias, which both narrated and celebrated the continuance of the long and storied relationship between Denmark and Britain. 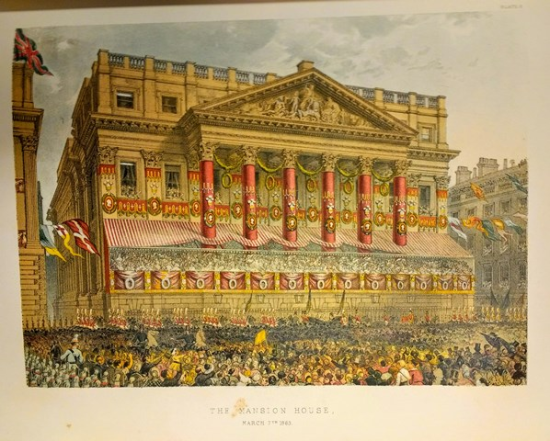 Dudley’s topographies of London Bridge, Mansion House and Temple Bar teem with crowds filling the streets and the windows, balconies and rooftops of every building along the way. The Princess is reduced to a speck of print lost in the swirling masses. The crowds are orderly spectators, contained by iconic architectures and regulated by highlights of regal red and gold. But the reality of the procession was rather different. Too few policemen and a lack of coordination between the various authorities involved in organising the procession coupled with a huge desire on the part of the public to participate in the day's events produced crowds which were neither orderly nor contained. As Russell writes in the accompanying text:

[The people] cheered as she came near, then gazed upon her face, and then cheered more loudly than ever. Too eagerly for the ease of the Royal Bride, they pressed against the horses and carriage-wheels, caught hold of the sides of the vehicle, stretched out their hands, and in one struggling shouting turmoil, with waving hands and arms, and open throats, shifting and clinging like figures in a nightmare, they strove and contended to hold place and get nearest to the carriage which contained her.

Windsor Castle must have seemed like the calmest of safe havens to this young Princess and her family upon their arrival, following this most eventful of royal processions. 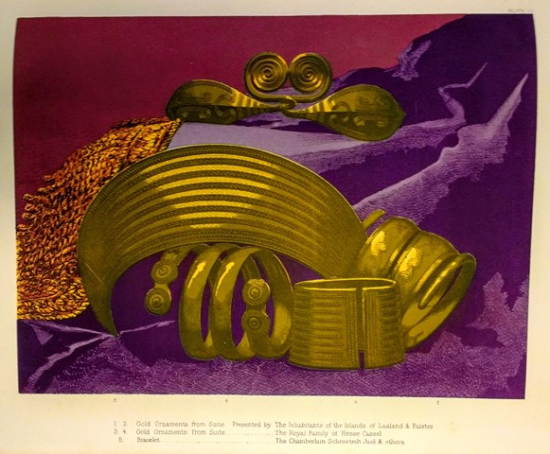 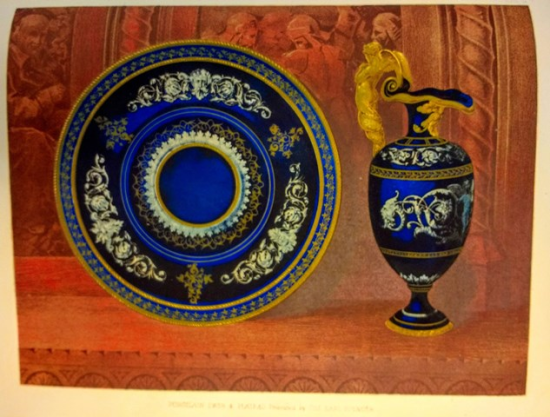 And some fine porcelain for the lucky married couple

This illustrations in this important and fascinating book perhaps preserve the royal wedding celebrations of 1863 as they ought to have been, rather than as they were exactly. Despite the decorous veil they cast over the events portrayed, they still provide us with an evocative glimpse into the past. To re-examine them in the light of the more recent celebrations, is to sense the pattern of our most common rituals framed in the specificities of uncommon times.