I am delighted, excited, and ever so slightly daunted to be embarking upon my journey as the British Library’s second-ever Translator in Residence. When I saw the advert it seemed like the perfect opportunity to bring together the things I have been most occupied with over the last decade or more: language, education, translation, cultural exploration and of course, books. 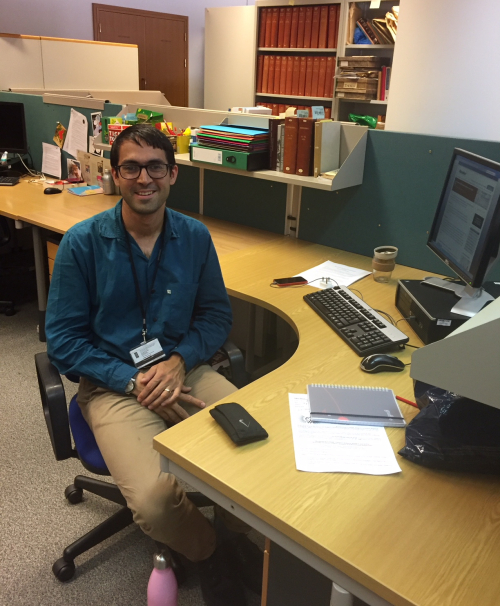 I came to literary translation relatively recently, and more or less by chance, when a friend of mine, who had recently set up The White Review, asked if I’d be interested in translating a short essay by the Argentinian writer, Cesar Aíra, followed by a longer piece by Enrique Vila-Matas. Having just moved to Cardiff and given up my job to look after my then two-year old son, cerebral activity of this kind was most welcome. Translating work by very much established Spanish-language writers, and seeing them out in the world, was a real kick so early on. Before long I translated my first piece from Portuguese, a wonderful essay on video games by the Brazilian Daniel Galera, and soon after was selected to go to Paraty, Brazil, for a BCLT/British Council organised literary translation winter school. Since those heady days translation has become an activity I can’t do without, and I’ve worked with some brilliant authors, publications and anthologies, as well as exhibitions, universities, and even Portuguese food export firm. However, I’m still chasing that first book-length translation.

At the same time, I have spent a good part of the last five or so years working as a teacher, first as a languages teacher in secondary schools in London and the Rhondda Valleys, and then as a teacher and co-ordinator of English as an additional language (EAL) in Fishponds, Bristol. This last experience, where I had the privilege of working closely with young people who had only recently arrived in the UK, sometimes from very difficult situations, made a profound mark on me, and will be just as instrumental in my approach to the residency as my experience with translation. Witnessing the difficulty some young people have adapting to their new surroundings, combined with the ease with which they pick up English (many of the children I worked with were already fluent in two or more languages) has really altered my perspective on a lot of things.

Over the course of my residency I want to draw attention to the wealth of skills and knowledge contained within UK schools, where unfortunately many multilingual children still think of their home language as a source of shame rather than a gift. I want to bring young people from all backgrounds into the library to learn about translation and themselves contribute to BL’s incredible collection, through creative collaborations and, if all goes to plan, creating their own entries for the library’s sound archives.

Inspired by the AHRC’s current Translating Cultures project, I also want to focus on how people’s identities change and adapt as people start existing in other languages. Though I grew up speaking only English, 3 of my grandparents spoke 4 languages between them (Hindi, Sindhi, Punjabi and Welsh) but spent most of their lives existing in English. I also want to play a small role in challenging the hegemony of English, which, under the guise of utility, ends up being ubiquitous, making the world a more predictable and less exciting place.

As well as celebrating the wealth of community languages spoken somewhere like Camden, or any notable UK town or city, I’d also like to bring the many native UK languages—Welsh, Cornish, Gaelic, Scots, Manx, as well as different dialects— to the attention of people in the capital. I grew up in London but have lived in Wales for half a decade; both of my children are educated through the medium of Welsh, and I am finally learning the language myself. I’m often astonished as to how little people outside of Wales know about the thriving bilingual communities that exist there, even in a city like Cardiff. So much media attention denigrates these tongues as ‘pointless’ or ‘dead’, even while simultaneously celebrating multilingualism in general. Again, I hope to redress that balance through events, open days and online activity. Of course, these are big ideas, and one thing I hope to take away from this year is the ability and the know-how to transform them into concrete things, with the help of the wonderful and talented staff of the library itself. I’m also hoping to involve other translators, to whom I owe so much, as collaborators, advisers, guest speakers, bloggers, and everything else!

Translation can be a hobby, a necessity, an occupation, a way of life, a process, and I’m honoured to have been given the opportunity to explore it in all its different guises, over a full year, and in such an amazing setting.

Charles Forsdick, “Translating Cultures” Theme Leadership Fellow, Arts and Humanities Research Council, said:
The AHRC “Translating Cultures” theme is delighted to be working with the British Library and the IMLR on the translator-in residence scheme for a second year, following the highly successful inaugural residency of Jen Calleja. We look forward to supporting Rahul in the role, and to ensuring that AHRC-funded researchers from among the 100 or so “Translating Cultures” projects are fully engaged in the activities he plans. The collaboration is an excellent way to enhance public understanding of translation, and to demonstrate that the multiple languages spoken in the UK are a key national resource and an integral part of everyday life.

Catherine Davies, Director of the Institute of Modern Languages Research at the School of Advanced Study, University of London, said:
Collaboration with the British Library and the AHRC on the translator-in-residence scheme is a new venture for the IMLR, and one we hope to continue in future years. IMLR promotes research in Modern Languages and of course this includes Translation and Creative Writing. Rahul’s priorities, to work with schools, migrant communities and community languages, are also priorities for the IMLR. Everyone who can speak a language other than English should be proud of their languages, and should be given due accreditation and recognition. Rahul's work at the British Library will help make this a reality and inspire us to cross borders and celebrate Britain's rich language diversity.

Janet Zmroczek, Head of European and American Collections at the British Library, said:
The British Library is thrilled to be hosting its second translator in residence and to be working with Rahul, and our partners at the AHRC and the IMLR to build upon the success of the inaugural residency scheme that the BL began last year with Jen Calleja. The Library is a natural home for translation and translators, holding as it does incomparable contemporary and historical collections in a vast range of languages, from historical dictionaries and print publications in most written languages of the world, to the archives of literary translators, sound recordings and oral history interviews. Rahul’s ambitions to bring together the Library’s dedicated multilingual staff, local communities and an international community of researchers, students and visitors will I’m sure make it a busy and fascinating year ahead for us all.