The library of the English King Henry VII contained about 40 copies of editions produced by the Parisian publisher and bookseller Antoine Vérard, most of them on vellum and illuminated, although only a minority of those contain marks of provenance such as textual modifications, the heraldic arms of England, the HR monogram, or numbers from the later inventories of the Royal Library made at Richmond Castle or Westminster Palace in 1535 and 1542. At the time, these copies on vellum were bound in red, blue or black velvet, and though most of the original bindings have disappeared, the later British Museum bindings have replicated this feature. 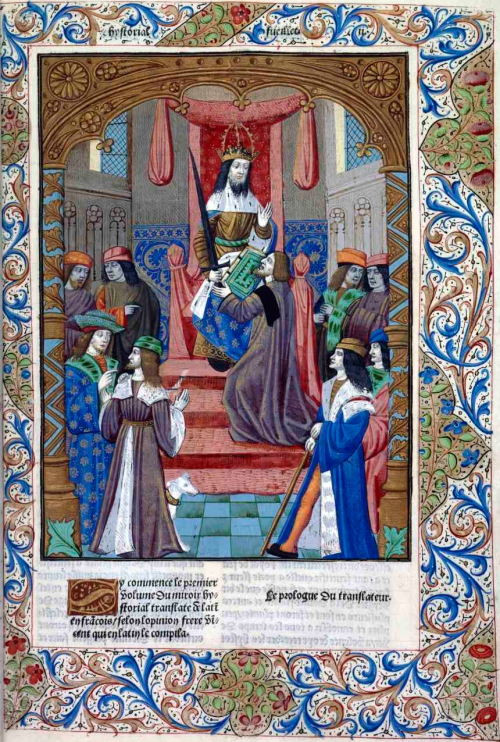 In 1492, Henry VII appointed Quentin Poulet, a scribe and illuminator from Lille, as official librarian, keeper of the newly founded Royal Library. Poulet’s ornate signature features at the end of the paper copy of the 1499 edition of the prose version by Jean Gallopes of Guillaume de Diguleville’s Pelerinage de l’ame (IB.41186). 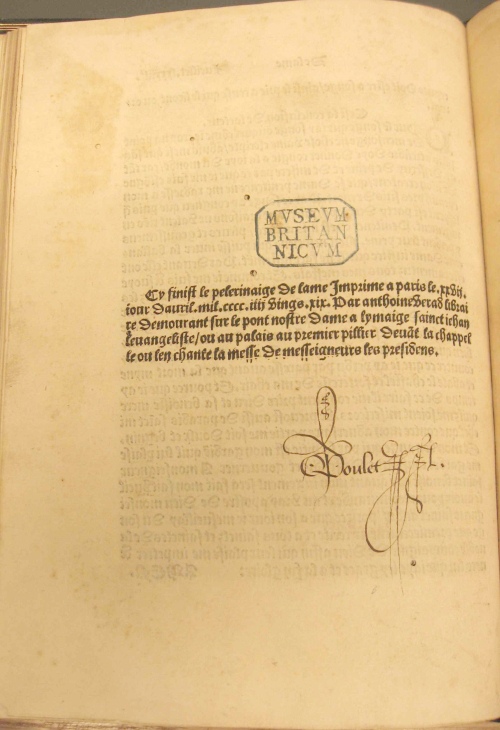 Illuminated copies of Vérard’s editions printed on vellum were produced for individuals such as Charles VIII of France, his most important patron, as well as other members of the French royal family and aristocracy: Charles d’Angoulème, Louise de Savoie, etc. In a few cases, the name ‘Charles VIII’, ‘roy de France’, which features in many prologues of Vérard’s editions, has been manually replaced by ‘Henry VII’, ‘roy d'Engleterre’ in the copy made for him, as in the opening of the 1494 vellum copy of the French version of Boethius’ De Consolatione philosophiae. 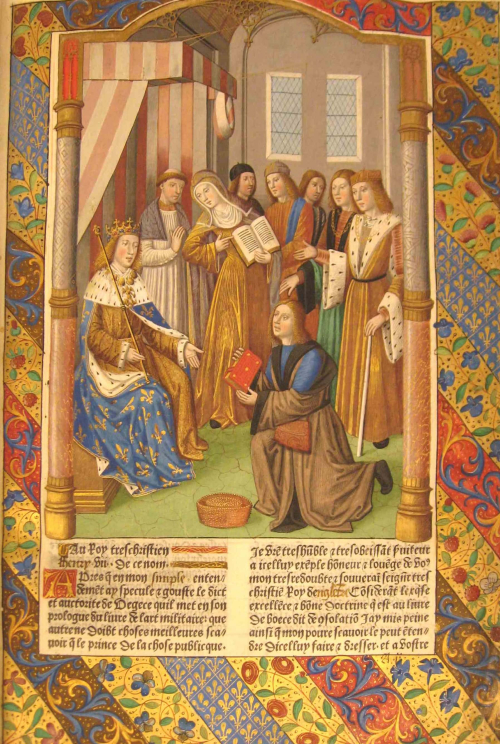 Vérard also produced a few editions for the British market, such as an English translation of a book first published in French in 1492, The book intitulyd the art of good lyvyng and good deyng (1503; C.70.g.14.) and a Book of Hours for the use of Salisbury (Horae ad usum Sarum, c. 1505), whose profuse illustration in quarto format needed an impressive amount and assemblage of woodcuts. The British Library copy (C.35.e.4) bears traces of the Reformation (several images of saints have been crossed out) but has ironically been rebound with paper waste made of several leaves of the Protestant Book of Common Prayer. Although Vérard almost only used woodcuts to illustrate his editions, he occasionally combined them with metalcuts, as demonstrated by the different types of damage to the blocks visible in these images. While woodcuts tend to crack, metalcuts bend and are distorted (probably through human manipulation rather than the pressure of the press). 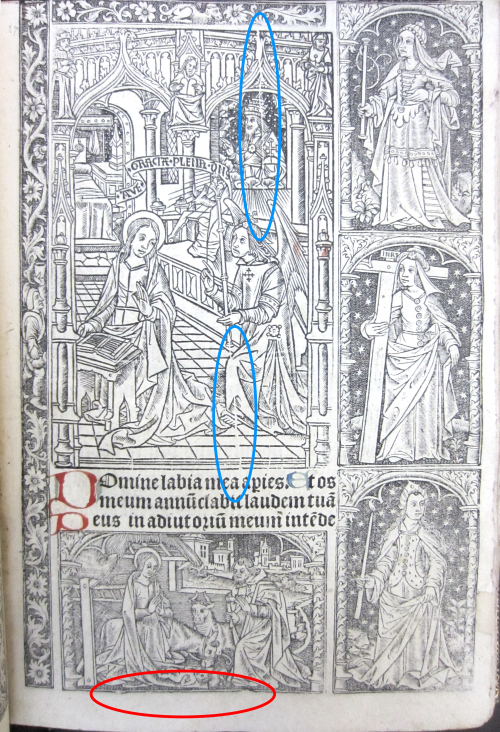 Vérard’s printed books are well known for the importance of their illustrations but also for the widespread reuse of woodcuts, which was facilitated by the use of generic scenes. It can create meaningful associations, or lead to discrepancies between texts and images. Vérard did not always produce illuminated editions on vellum with a particular patron in mind (he probably had some ready to be purchased in his Paris bookshop), but when he travelled to England himself in 1502, he probably offered some to the English king in person: there is a record for a payment made to ‘Anthony Verard’ for a paper copy of the Jardin de santé. In this encyclopaedic text (a French translation of the Hortus Sanitatis) published between 1499 and 1502, while the familiar strawberries are accurately depicted, the woodcut used for the peach tree is more generic and reused for all kinds of exotic trees bearing fruits (C.22.f.9). 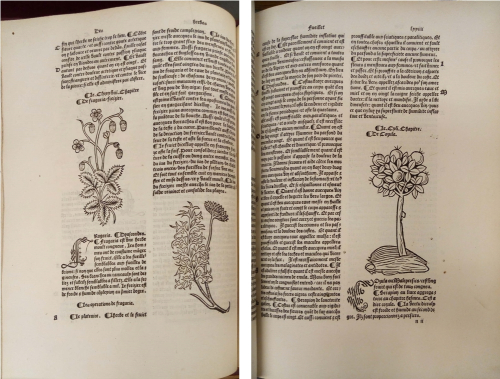 Vérard worked with many artists and engravers. Among them, the styles of Jean d’Ypres and Guérard Louf are very representative of the Parisian aesthetics of that time. Apart from designs for woodcuts and metalcuts, the workshop of Jean d’Ypres produced illuminated manuscripts and tapestry and stained glass designs. Guérard Louf and his collaborators, who also produced illuminated manuscripts, were inspired by northern French and Flemish painters. This group of artists was responsible for more than half of the 2000 woodcuts and metalcuts used in Vérard’s editions. Woodcuts could be modified in order to fit better the text they accompanied. Vérard’s edition of the Bataille judaïque by Flavius Josephus, printed after December 1492, contains a woodcut showing Bishop Ananus leading his troops. The bishop’s mitre was erased and replaced with a crown, to represent King Gontran meeting his nephew, in the 1493 edition of the Chroniques de France. This crown was then transformed back into a hat around 1502, so that the main character could be recognized as the Duke of Burgundy organising a meeting in Vérard’s first edition of Enguerrand de Monstrelet’s Chroniques.

For his copies on vellum, Vérard employed artists such as the Master of Jacques de Besançon (recently identified as François, the son of Maître François / François le Barbier), the Master of Robert de Gaguin or the Master of Philippe de Gueldre, who best known for their manuscript illuminations while their contribution to the illustration of books printed on vellum has often been neglected. Many of the illuminations in Vérard’s vellum copies still lack artistic attributions. The practice of collaborative work, the homogeneity of style, and the commonplace use of illustration templates within Vérard’s workshop all accentuate the difficulty in identifying the artists involved. 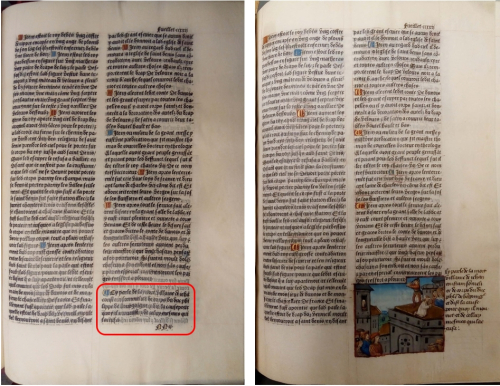 The use of illumination brought different degrees of modification to the illustrations produced for the paper copies: in some cases, the woodcut is printed and hand-coloured, in others, the design is modified by the illuminator, or a completely new scene is produced, whether the underlying woodcut is printed or not (as in the frontispiece of the vellum copy of Vérard’s 1498 Merlin). In longer narrative works like romances or chronicles, vellum copies include extra illuminations located in the spaces used for chapter headings in the paper copies. This is not systematic but greatly increases the number of illustrations and can lead to a new (though often stereotyped) iconography. The nature and location of the illustrations varies from one vellum copy to the other, as in the two illuminated British Library copies of the  Monstrelet’s Chroniques published between 1501 and 1503. While the execution of Jehan Coustain, Philip of Burgundy’s Master of the Wardrobe, accused in 1462 of plotting to poison the Count of Charolais, is dramatically depicted at the bottom of folio 222 in IC.41248 (the image uses the space of the lower margin, and the chapter heading has been copied by hand on the right), it has not been illustrated in the royal copy, C.22.d.8.

This blog was written in relation with a workshop on Antoine Vérard’s French early printed books held on 28 June 2018 at the British Library, in collaboration with the Early Modern Book Project. It was organised by Louis-Gabriel Bonicoli (NY State University at Albany), Irène Fabry-Tehranchi (BL) and Karen Limper-Herz (BL), and received the support of the Friends of the British Library.

Libraries within the Library: The Origins of the British Library’s Printed Collections. Edited by Giles Mandelbrote and Barry Taylor (London, 2009) YC.2010.a.1356

The Library of the British Museum: Retrospective Essays on the Department of Printed Books, Edited by P. R. Harris (London, 1991) YC.1992.b.1600