Funding Victory: French posters from the end of the First World War

The British Library holds an important collection of French propaganda posters from the First World War. This striking material, often of high artistic quality, constitutes a fascinating means to reflect on the values and motivations as well as the challenges faced by French society at the time. Many posters dating from the end of the war call for the financial support of French civilians by subscribing to ‘Liberation Loans’, first to finance victory and, after the war, to fund ongoing reconstruction. These were government bonds issued through banks, given by individuals to the state at a fixed, low interest rate and redeemable after a given period. Subscribing to them was presented as an integral part of the war effort. The posters advertising them highlight a situation of economic strain (high government debt, inflation and currency devaluation), and its social and political repercussions, stressing the financial responsibility of civilians to support soldiers on the frontline. 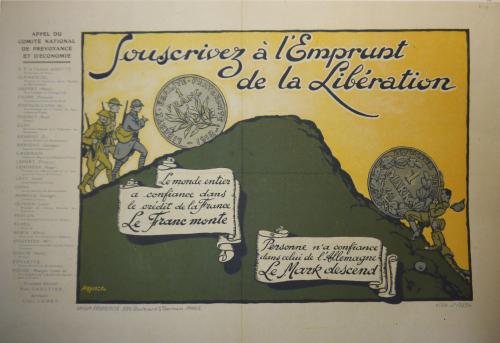 The poster ‘Souscrivez à l’emprunt de la Libération’, illustrated by the artist and caricaturist Édouard-Alexandre Bernard, was issued in 1918 by the Comité national de prévoyance et d’économie, led by members of the government, businessmen and industrialists, academics and Church representatives, whose names are listed on the left-hand side: their authority and expertise support the poster’s message. The promotion of Liberation Loans links the relative strengths of the French and German currencies to the two countries’ military situations. On one side, the one franc coin seems to climb effortlessly up a slope, leading the way for a group of allied soldiers to ascend. The caption indicates that since the whole world trusts France's credit, the franc strengthens; meanwhile, since nobody trusts Germany's credit, its currency weakens. On the other side, a one mark coin rolls down a cliff. Barely supported by the soldiers who attempt to prevent its downfall, the wayward coin appears about to crush them. 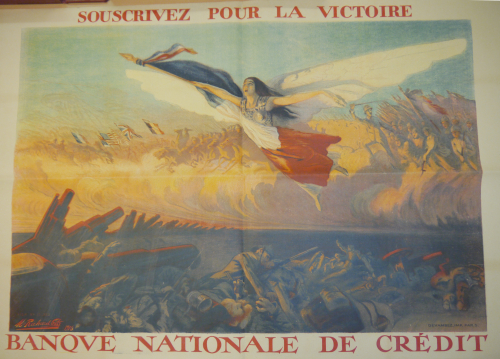 In these posters, subscription to war loans is presented as essential to support the army and hasten the victory of the French troops. The poster ‘Souscrivez pour la Victoire’, by Richard Gutz, advertises subscriptions through the Banque nationale de crédit. It displays in the sunset, a female allegory of Victory, winged, in armour and wrapped in the French flag, leading through the air cavalry and infantry who bear French, British, Japanese, American and Serbian flags. The perspective of their triumphant charge contrasts with the scene below, depicting a mass of wounded and dead soldiers on the battlefield. The poster thus also highlights the cooperation of the allied forces. 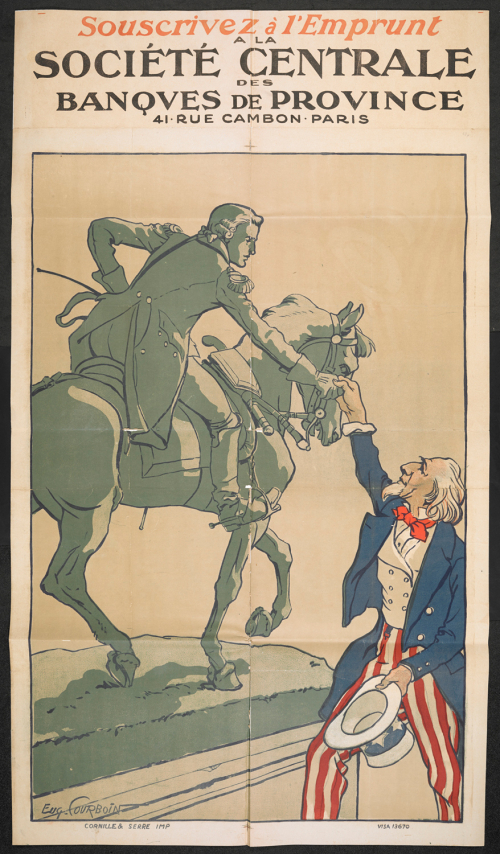 A poster by the illustrator and painter Eugène Courboin, ‘Souscrivez à l’emprunt à la Société centrale des banques de province’, reminds the viewer of the historical links between France and America and the need for reciprocal help. It shows a colourful Uncle Sam shaking hands with a statue of the Marquis de Lafayette, the French general who fought for the Americans in the War of Independence of 1776. 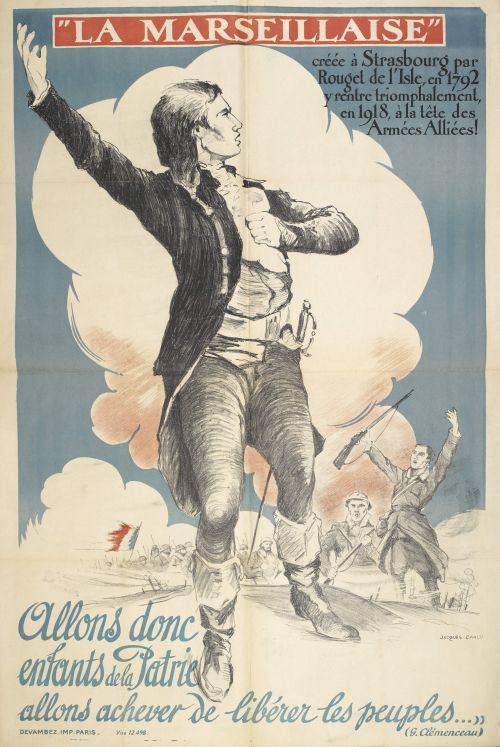 Historical references and national symbols were a powerful way of exalting French patriotism, as in Jacques Carlu’s 1918 poster, dominated by the colours blue, white and red. La Marseillaise, the national revolutionary anthem written in Strasbourg in 1792 by Rouget de L’Isle (who features at the centre of the picture, one hand raised and the other on his chest), is described as returning triumphantly in 1918 with the allied armies (depicted behind Rouget). National and regional pride are stirred up by the allusion to Marseille and the reference to Alsace as a long-standing part of France. In the bottom left is a quote by the French Prime Minister Georges Clémenceau, ‘Allons donc enfants de la Patrie, allons achever de libérer les peuples’, which rewrites the national anthem by giving it an international scope: the liberation of the peoples. 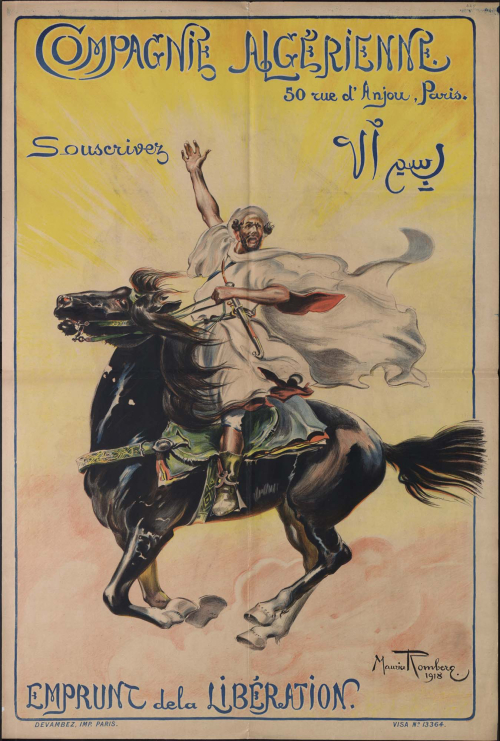 A Liberation loan poster from the Paris headquarters of the Compagnie algérienne was made by the Belgian artist Maurice Romberg de Vaucorbeil who had travelled to Morocco and created an extensive body of work in North Africa. It depicts a heroic Algerian warrior in traditional costume riding a beautiful black stallion, with an elaborate script and the Arabic inscription ‘In the name of God’. It reminds us of the crucial role played by the French colonies and French colonial troops during the war. 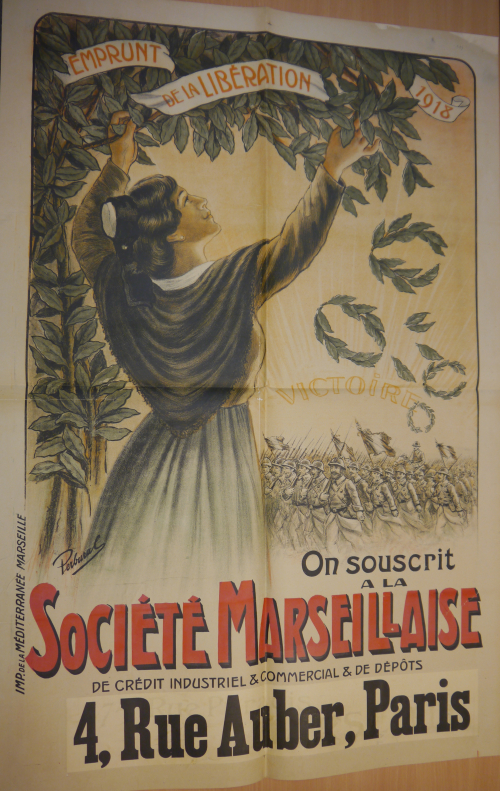 The posters also give insights into the hope for peace and reconstruction, with the return of demobilised troops after the war. The poster ‘Emprunt de la Libération’, 1918, signed by ‘Perbural’, advertised for subscriptions to the Société Marseillaise for industrial and commercial credit and deposits. A woman in regional dress reaches up to gather laurel leaves which fall as crowns on a crowd of French soldiers returning under the sunshine with the word ‘victory’ above them. Despite the importance of regional elements like the laurel and the traditional dress, if you look closely at this poster you can see that the Marseille address has been covered over by that of the Paris offices. Another poster advertising Liberation loans was issued by the Chambre des notaires de Beauvais. It features a black and white drawing by Lucien Jonas, an established painter who worked for the French Army and Navy during the war. In this case, the image does not depict armies but a single soldier bringing home two small girls. The elder wears a traditional Alsatian outfit (including the distinctive black bow headdress) and holding a French flag, while the younger wears the Lorraine cross and white bonnet. The image illustrates verses by Jules Favre, a statesman at the beginning of the Third French Republic, about the recovery of Alsace and Lorraine lost during the Franco-Prussian War (1870-71). Through liberation and victory, the happy scene, reminiscent of a joyful family reunion, embodies the territorial reunification of France at the end of the conflict.

Visual sources and ephemera are essential to our understanding of the First World War. Displaying nationalistic posters advertising the collecting of funds for the war effort to enable victory and support reconstruction at the time of the liberation of France emphasised the economic underpinning of the war and its monetary and social consequences. The posters illustrate the importance of financial history which is crucial to our understanding of the funding of the war and the social consequences of the economic situation. They carry powerful imagery and strong patriotic symbolism at regional, national and international levels. Although they display optimism and hope after the hardships of the war, the loan posters, which before and after the armistice appeal to civilian populations for the support of the army and the reconstruction of the country, demonstrate ongoing economic challenges and can also be seen to foreshadow indirectly the financial and political crises of the interwar period.