‘Once upon a time, in a distant northern country, there lived a man who had seven sons and three daughters…’ This might be the beginning of a folk-tale – and indeed young Armas Einar Leopold Lönnbohm, the youngest of the seven, born on 6 July 1878, would grow up to lead a life shaped by myth and poetry. At the time of his birth in Paltamo, Finland was still a Grand Duchy under Russian control, and as he grew up he became aware of the increasing friction between the Finnish people and their oppressors, culminating in the assassination in 1904 of Nikolai Bobrikov, the Governor-General of Finland, by the young Finnish patriot Eugen Schauman. Helen Dunmore’s novel House of Orphans (London, 2006; ELD.DS.193298) vividly evokes the atmosphere of that period and the fervour of the conspirators, afire not only with revolutionary zeal but with love of their country’s culture and literature.

Our hero’s father had changed his surname from the plain Finnish Mustonen (Black) to the Swedish Lönnbohm in the interests of his career, but as a loyal Finn the seventh son could not accept this, and it was under a new name of his own choice that he achieved fame as the poet Eino Leino.

Orphaned while he was still at school, the boy was taken in by relatives in Hämeenlinna, where he was educated at the local grammar school and subsequently entered the University of Helsinki. He was already showing signs of a precocious literary talent; at the age of 12 he published his first poem, and in 1896, when he was just eighteen, he brought out his first collection, Maaliskuun lauluja (‘Songs of March’). Two years later he and his elder brother Kasimir founded a literary magazine together; Kasimir became not only a poet in his own right but also a critic and theatre director. Eino soon decided that academic study held little attraction for him, and left the university to become a journalist and literary critic for various Finnish newspapers. He also embarked on a career as a novelist, writing both historical fiction and works of social satire. In 1909-10 he travelled through Italy, Germany and Sweden, absorbing influences from European literature, including those of Gabriele D’Annunzio, Gerhart Hauptmann and Maurice Maeterlinck which inspired him to create a new Finnish theatrical tradition based on pure poetry rather than the naturalist drama typified by Ibsen. His poetry drew inspiration from Heinrich Heine and Johan Ludvig Runeberg, the poet whose words became the text of Finland’s national anthem, but also from the Kalevala, linking Finland’s present striving for independence with motifs from ancient legends. At the same time he sought to build bridges between Finland and the wider cultural legacy of Europe though his translations of Schiller, Racine, Corneille, Dante’s Divina Commedia (made in Rome in 1908-09) and Goethe’s Iphigenia auf Tauris (Helsinki, 1910; Ac.9080) and his essays on contemporary authors including Anatole France, Tolstoy, Ibsen and Strindberg. 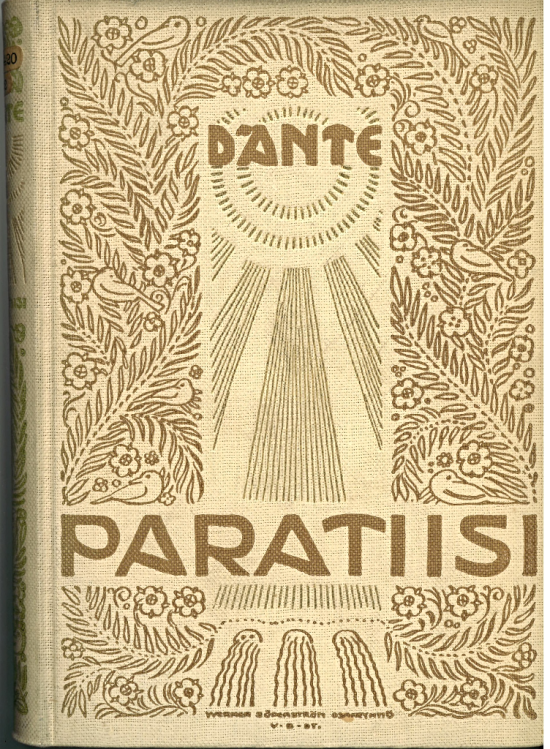 However, he experienced a constant tension between nationalist objectives and individualistic ideologies. Like W. B. Yeats, in his poetry he frequently uses symbols from folk poetry to contrast the heroism of the mythical past with the squalor and disillusionment of modern politics, and his early Symbolist dramas such as Sota valosta (‘War over light’: Helsinki, 1900; 11758.bbb.43) introduce the theme of decadence into a world peopled by heroes such as Väinämöinen, Ilmarinen and Lemminkäinen who are betrayed and rejected by a fickle populace greedy for material benefits rather than the light symbolized by Väinämöinen’s flaming sword.

When in 1905 political strike action against Russian rule brought into focus the differing political interests of the intelligentsia and the working classes, Leino’s pessimism increased as he witnessed the rise of the radical socialist workers’ movement and the clashes which occurred during the strike. From being an enthusiastic member of the Young Finland movement and ardent neo-romanticist, he became increasingly cynical; with the outbreak of the Finnish Civil War in 1917, Leino’s idealistic faith in national unity collapsed, and his influence as a journalist and polemicist diminished, although he was granted a state writer’s pension in the following year.

Leino’s personal life was similarly turbulent; he married three times, but possibly his most significant relationship was with the novelist L. Onerva (Hilja Onerva Lehtinen) whose two-volume biography of him, Eino Leino: runoilija ja ihminen (‘Eino Leino: the poet and the man’) reflects the complex intertwining of their equally strong creative personalities. After suffering years of health problems and financial instability, Leino died on 10 January 1926 in Tuusula and was buried in Helsinki’s Hietaniemi cemetery. His birthday is celebrated throughout Finland on 6 July, when the national flag will be flying all over the country in honour of Eino Leino Day, ‘the day of poetry and of summer’.