Visitors to the recent exhibition Rodin and the Art of Ancient Greece at the British Museum will have seen, among the photographs of the sculptor at work in his studio among his disciples, the image of a dark-haired young woman whose gaze was equally intense when fixed on the master or on her own work – Rodin’s pupil, model and mistress Camille Claudel.  Her stormy relationship with him and her reputation as a pioneering woman sculptor, depicted in biographies, plays and films, have raised her profile outside her native France, where, despite this, the name Claudel is more readily associated with her younger brother Paul.

Together with their sister, Camille and Paul grew up in Villeneuve-sur-Fère (Aisne) in a family with solid roots in farming and banking. The young Paul’s approach to spiritual matters was equally rational and prosaic, tending towards atheism, until at the age of 18 he underwent a profound conversion experience while hearing the choir of Notre-Dame singing Vespers on Christmas Day. He remained a devout Catholic for the rest of his life, and considered becoming a Benedictine monk. Instead, however, he went into the diplomatic service, and found an outlet for his religious fervour in poetry and drama.

At the same time, his experiences of living in other countries provided him not only with inspiration but also with a deeper understanding of their cultures than the mere taste for exoticism. and especially for Oriental culture, common in France at the turn of the century. He made rapid progress in his career, rising from first vice-consul in New York and Boston to become French consul in China, living in Shanghai, Fuzhou and Tientsin, before being posted to Prague in December 1909. 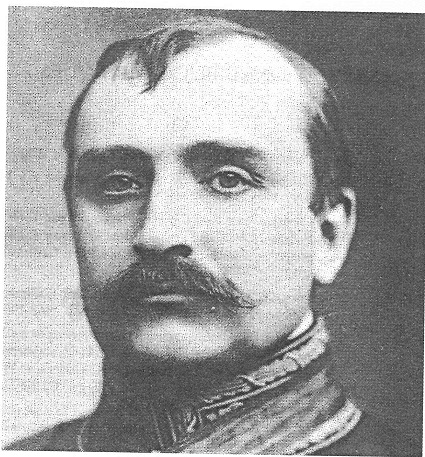 Czech artists and authors had already established a thriving community in Paris in the 19th and early 20th century, and Claudel’s time in Prague similarly contributed to the deepening of cultural relationships between France and Bohemia. One of his most important contacts was with the Czech artist Zdenka Braunerová, who introduced him to her circle of friends, including Vilém Mrštík, Julius Zeyer and Jan Zrzavý. She had spent part of every year in Paris during the period 1881-1893, promoted Czech culture in France, and invited Auguste Rodin to visit Bohemia and Moravia in 1905. Claudel chose her as godmother to his daughter, born during his residence in Prague, and their lasting friendship enhanced the understanding of Czech art in France and of French literature in Bohemia.

Inspired by his exploration of the Czech spirit and its expression in art, Claudel composed a sequence of poems, Images saintes de Bohême, of which the British Library possesses a bilingual edition in French and Czech a testimony to the deep impression made on him by a city which he had initially greeted with distaste as an ‘icy bivouac’.

Claudel subsequently served as consul in Frankfurt am Main and Hamburg, as ministre plénipotentiaire in Rio de Janeiro and Copenhagen, and as ambassador in Tokyo, Washington, D.C. and Brussels. Several of his works were published abroad, including his translation of Aeschylus’s Agamemnon (Fuzhou, 1896; YA.1986.a.1815) and the exquisite edition of his poem ‘Sainte Geneviève’, composed in Rio de Janeiro in July 1918 and issued in a limited edition with Japanese woodcuts executed in Tokyo from drawings by Claudel’s friend Audrey Parr. 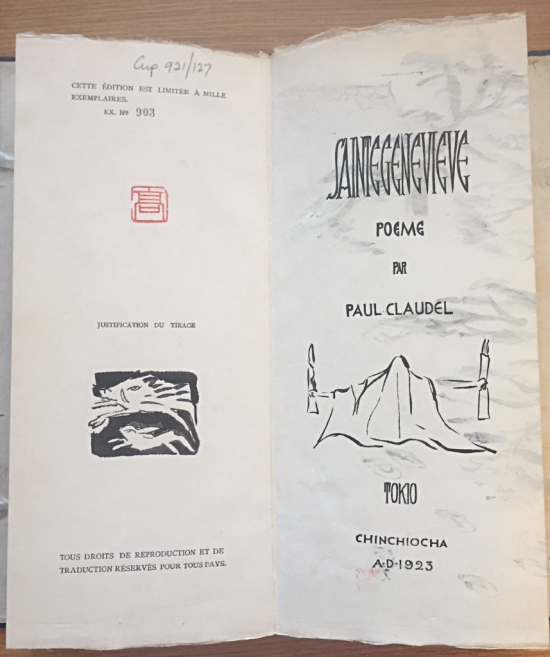 Although initially influenced by Rimbaud and the Symbolists, Claudel struck out in a different direction, deeply imbued with his Catholic faith. Not surprisingly, the saints frequently figured in his work; for example, he provided the text for his friend Arthur Honegger’s oratorio Jeanne d’Arc au bûcher (s.l., [1935]; Music Collections I.1650), and also wrote a poem on St Thérèse of Lisieux, published in another limited edition with illustrations by Maurice Denis. 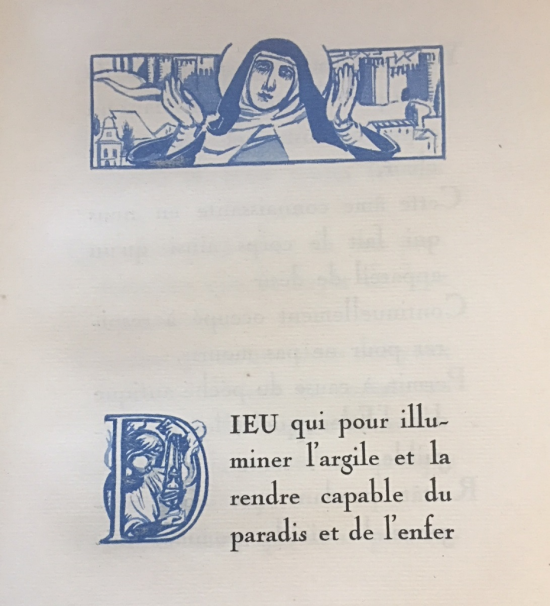 Among the treasures in the British Library’s Stefan Zweig Collection of Manuscripts  is a fair copy of Claudel’s play L’Annonce faite à Marie (1911), signed by the author and presented to Zweig in 1913. Like his other dramas, such as the Everyman-like Le Soulier de satin (Paris, 1929; 12516.v.27), set in the age of the Conquistadores, it explores the timeless themes of human responsibility, guilt and divine grace. 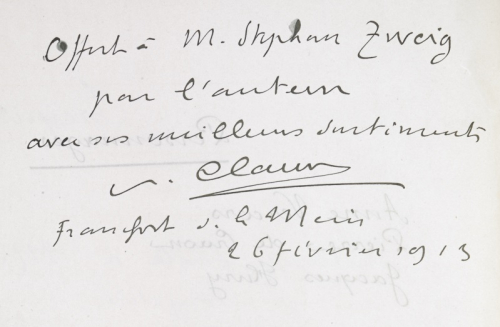 Dedication to Zweig and opening of the prologue, from the manuscript of L’Annonce faite à Marie. Zweig MS 139. Ff.2v, 3r  (below) 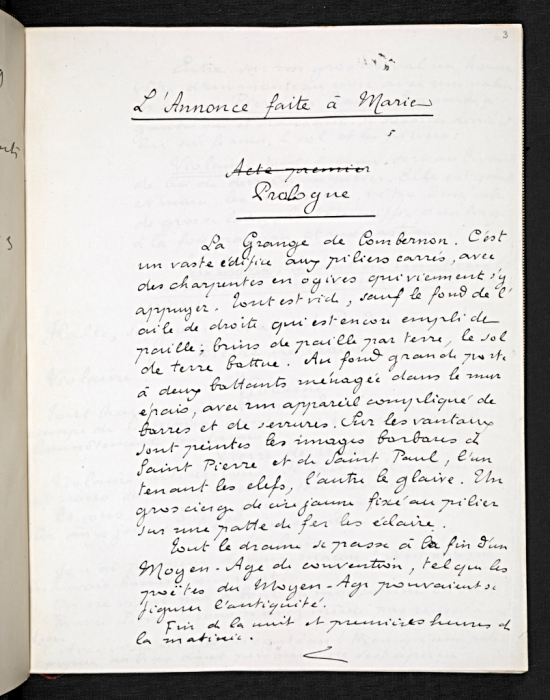 The careers of Camille and Paul Claudel appeared to diverge widely; while one plunged into an unconventional milieu and died in an asylum, the other was outwardly a pattern of respectability, representing his country abroad and forming part of the Catholic literary tradition continued by Mauriac and Gide. Yet both, equally controversially, pursued their chosen forms of art with a passion and intensity which sought to transcend the banalities of everyday life and infuse it, even at its humblest, with a spark of the divine, as may be glimpsed from a few lines of one of Paul Claudel’s poems in the metre that he devised:

Now winter has come in earnest, and St Nicholas trudges again
Through the firs; two sacks on his donkey, full of toys for the young of Lorraine.
There’s an end to mouldering autumn, and the snow is here with good reason;
There’s an end to the autumn and summer, and all the other seasons.
(O all that was still not finished, where this black soaked path, yesterday, went
Under the ragged birch in the mists, and the great oak with its strong scent!)
[…]
But in a white world there are only angels completely at ease;
There is not a living man in all of the diocese,
There is not a soul awake, not even a small boy breathing,
O mighty Bishop of Myra, at the hour of your coming at evening!