Failing Colonizers or Failing Memory: Sweden in the Americas

Colonial history rarely makes us think about the Nordic region. That omission, it has been said, allows these nations to ignore their connections to the global imperial system. As Gunlög Fur writes with regard to Sweden’s self-understanding in the 20th century, ‘there was no decolonising moment, during which Sweden had to rethink its position. Instead this left room for reformulating a Swedish strategy for non-alliance and mediation’ (p. 24).

The current BL exhibition ‘Windrush: Songs in a Strange Land’ encourages us to look closer. The discovery of three 18th-century Swedish legal documents in the British Library collections (to add to the many others received and purchased over the centuries) reminds us of Sweden’s continuous intention to compete with the superior European powers at the colonial table, a table at which their neighbours Denmark had already managed to establish themselves. 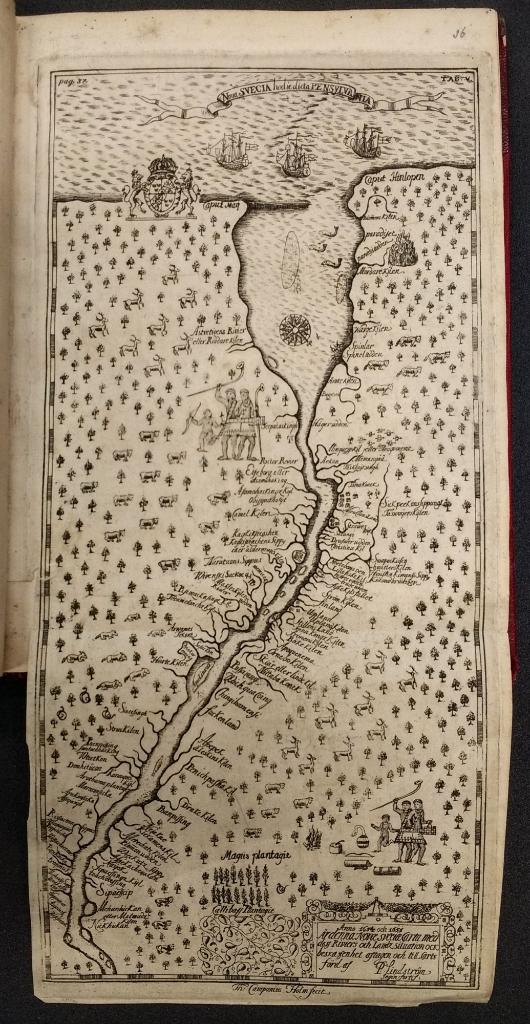 But first, a quick sketch of Sweden’s Atlantic exploration. 1637 saw Sweden establish a colony on the banks of the Delaware River, with the help of Dutch merchants. ‘New Sweden’ was short-lived (it collapsed in 1656) but it still ‘became a home for generations of colonists’ (Ekengren et al., p. 169). In 1702 Thomas Campanius Holm wrote a comprehensive account of the geography, the colonists, the native Indians and, perhaps most interestingly, included chapters of phrases in the Lenape language. 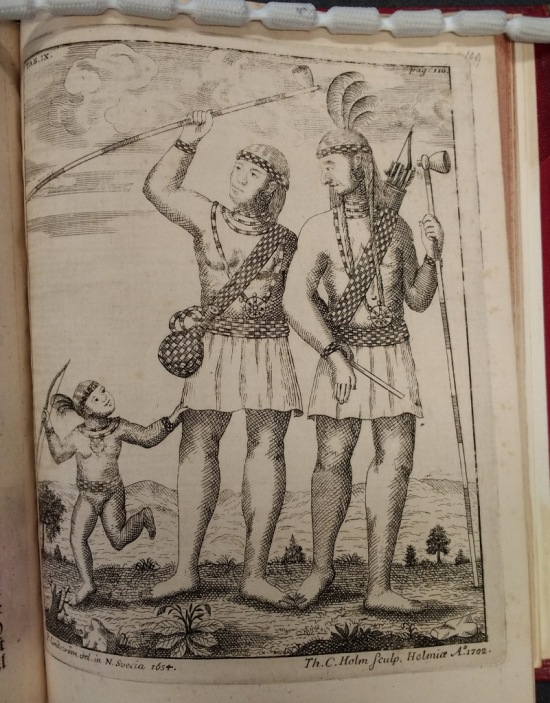 Above: Engraving by P. Lindström depicting Lenape Indians, and below: List of Lenape phrases related to fish and birds, both from Thomas Campanius Holm Beskrifning om provincien Nya Swerige 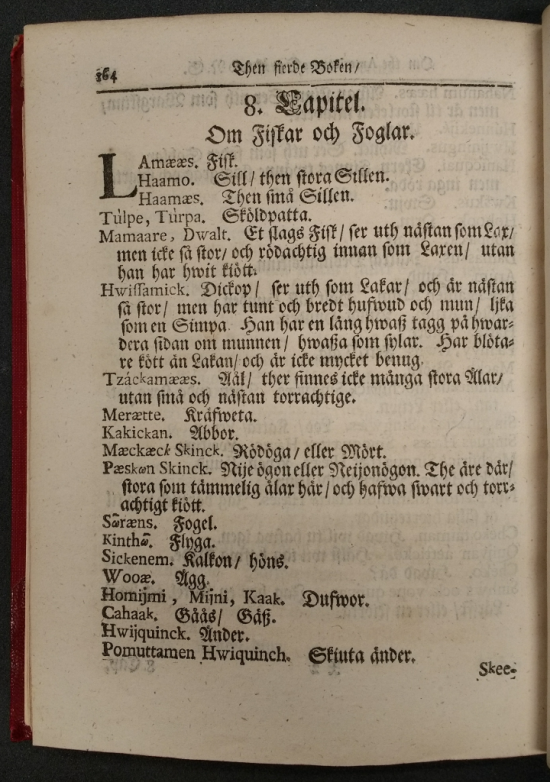 While the two decades of official Swedish occupation in Delaware have often been viewed, in early histories of the period, as either ultimately unsuccessful and therefore harmless, or successful in Sweden’s cultivation of wild forest into fertile land (and therefore harmless), the episode might be seen in parallel to the establishment of West African forts at the same time. Seafaring expertise and a thirst for trade opportunities led the Swedes simultaneously to America and Africa (with the Sápmi, arguably also part of the ‘colonial’ conversation), tying the search for land and goods and the accompanying Christian missionary activities, together with the beginnings of the Atlantic slave trade.

Sweden had to wait 130 years for their next American colony, the island of St Barthélemy in the Caribbean, given by France in return for trading rights in Gothenburg. However, modern scholarship does not consider the intervening period a hiatus, rather ‘Sweden’s interest in the American world continued unabated, as evidenced by several plans to found colonies in the Caribbean or on the South American continent. At the same time, economic ties, both direct and indirect, were growing between Sweden and the Americas’ (Schnakenbourg, p. 229). 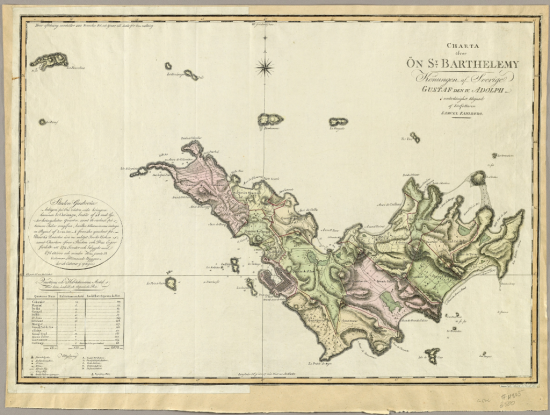 It is the latter idea of economic ties across the Atlantic, which is in evidence in the British Library collections recently found. The importance of Swedish iron to triangular trade is one example of how Sweden fitted into the global network (Evans and Rydén) but Sweden was not content simply to export domestic products. Rather, they were consistently engaged in establishing a colony in the Caribbean, since the premature end of earlier ventures (Schnakenbourg). The Library holds both the 14 June 1731 privilege for ‘Hindrich [Henrik] König & compagnie angående en fart och handel på Ost-Indien’, which inaugurated the Swedish East India Company, as well as the 2 December 1745 privilege ‘på en handels och siö-farts inrättande på America, för handelsmännerne Abraham och Jacob Arwedson & Compagnie’, which preceded the founding of the Swedish West India Company. 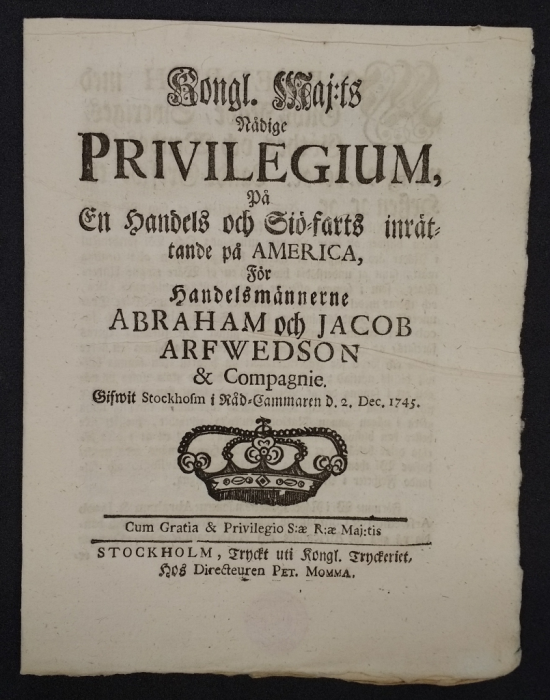 Privilege for Abraham and Jacob Arfwedson to travel and trade in the Americas. RB.23.b.3540

While engaged in triangular trade in the mid-18th century, supplying slaves to Caribbean colonies owned by other powers and directly selling Swedish commodities—herring as well as iron—to the new markets, the ambition remained to possess somewhere in the Caribbean to begin their own trade in sugar and other products. Therefore, the 1745 privilege was also intended to explore the possibility of taking first Tobago and later Barima, but Spanish and Dutch suspicion would prevent any serious attempts by Sweden. Their goal was secured in 1784 with the exchange for St Barthélemy, an island the French had struggled (and the Swedish would struggle) to cultivate. The harshness of the land led to the declaration ‘som förklarar ön St. Barthelemy i Westindien för en fri hamn eller porto franco’, in other words the island became a free port in an attempt to maximize trade activity. 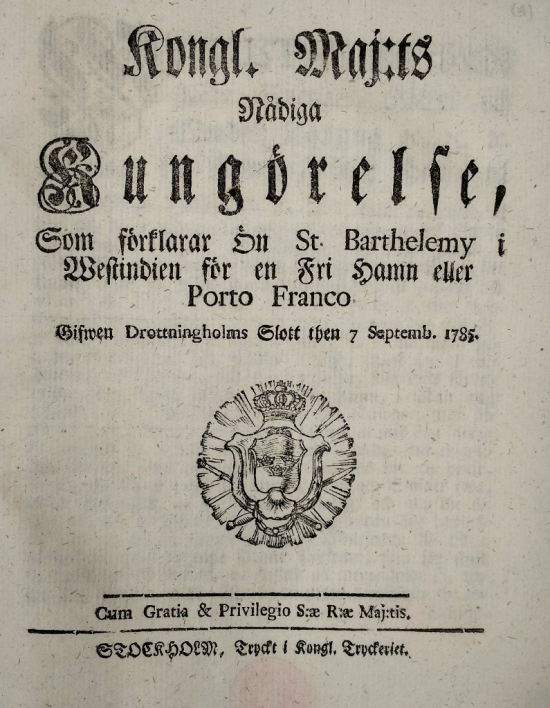 Eight months later the Swedish crown was obliged to publish a sort of corrective to the free port announcement, as it had seemingly encouraged too much interest among Swedes in making the switch to the Caribbean. The notification ‘Til hämmande af obetänkte utflyttningar til Ön St Barthelemy’ of 2 May 1786 suggests that the previous year’s announcement was intended to encourage traders and not settlers. It highlights the tough conditions on the island, the lack of resources and the resistance to cultivation, as well as the limited space. Farmers, instead, should think more about working the fatherland! 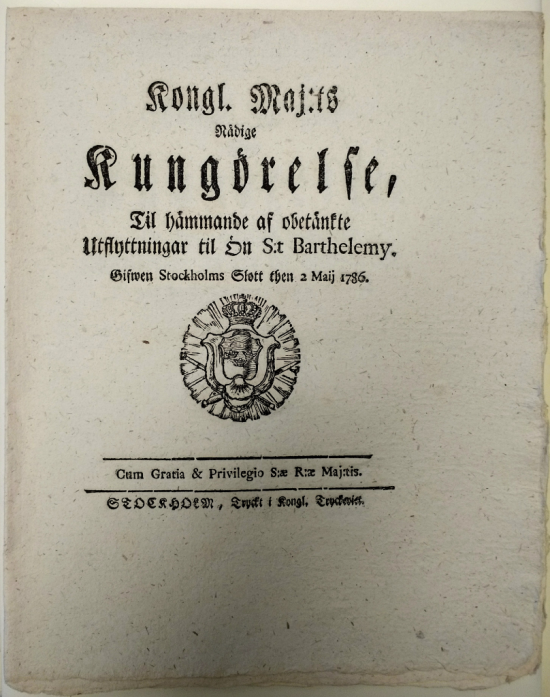 From the beginning of Swedish administration of the island and aided by the official establishment of Swedish West India Company on 31 October 1786, ‘a commercially-oriented infrastructure was erected with the development of the island’s natural harbour, le Carénage, as well as the edification of its capital city, Gustavia, with warehouses, supply depots, and public buildings surrounding the port’ (Lavoie et al., p. 381). To conclude this survey of some of the documentation regarding the Swedish colony of St Barthélemy, it is worth reiterating the complicated position contemporary Swedish historians are in. Fur describes the awkwardness as follows: ‘popular understanding has gone from no colonialism to post-colonialism without stopping in-between, without having to confront the challenges and ambiguities of decolonization’ (p. 26). The problem remains that St Barthélemy, in comparison to the sugar island colonies of other powers, was always a site of temporary and fugitive wealth as an entrepôt, and therefore Sweden ‘cannot be considered as a colonial power in the full sense’ (Schnakenbourg, p. 240). At the same time, by avoiding the overestimation of colonial achievements you risk the oblivion of the Sweden’s role in the global matrix of exploitation. ‘[N]owhere, and no one, was untouched by the forces of colonialism in the early modern world.’ (Horning, p. 297).

Chris Evans and Göran Rydén, ‘From Gammelbo Bruk to Calabar: Swedish Iron in an Expanding Atlantic’, in Scandinavian Colonialism…, pp. 53-67

Eric Schnakenbourg, ‘Sweden and the Atlantic: The Dynamism of Sweden’s Colonial Projects in the Eighteenth Century’, in Scandinavian Colonialism…, pp. 229-242