From under one of the British Library’s unassuming shelfmarks ‘Tab.11748.a’, a fascinating portal into the First World War emerges. It references a collection of some 350 French posters dating from 1914 to 1918, which were in the Library’s possession by 1920. While a few have been displayed in exhibitions or included in the British Library’s World War One website  and Europeana 1914-1918, the majority have waited, neatly stored in their sturdy red wooden boxes, for nearly a century. As part of the Library’s PhD research placement programme , I began delving into this wonderfully rich collection, with the aim of bringing to light these pages of history for researchers, historians and the wider public.

The Great War is considered the first ‘total war’ in that not only armies but whole nations were mobilised to support the war effort. The streets of towns and cities quite literally bore its signs. The posters in this collection are the tangible artefacts of the urban environment of those who lived through the war; they informed, persuaded, warned, entertained, prescribed and prohibited. The images and messages they convey are those which ordinary French people saw, read, leaned against, walked by, tore down and pasted over. As well as offering testimony to the dramatic upheavals for people across France, they also bear witness to the burgeoning visual vocabulary of poster advertising and mass publicity. 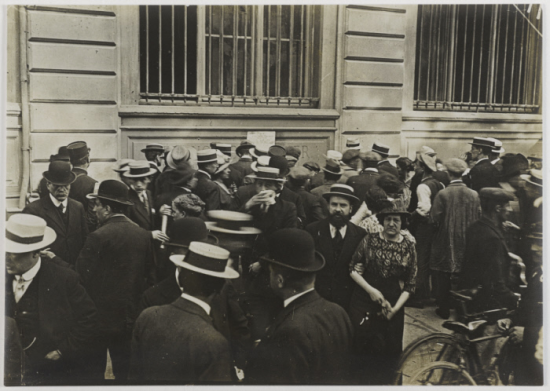 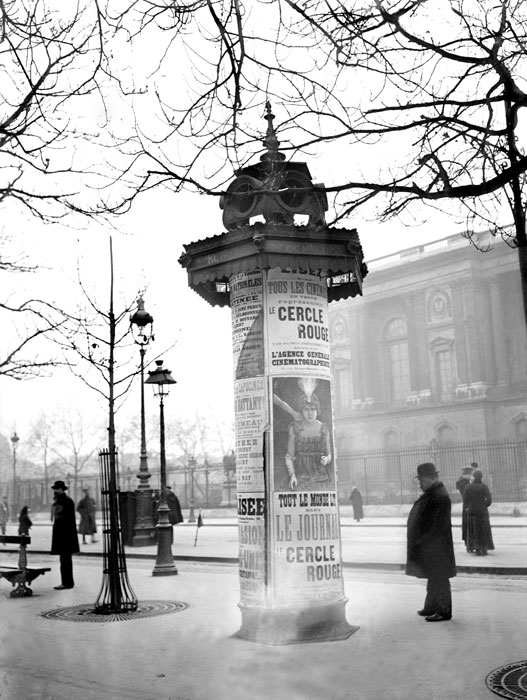 Eric Fisher Wood, an American in Paris at the outbreak of the war, remarks in his journal entry of 23 August 1914, ‘Here in Paris, extraordinary as it may seem, we have had no real news of the progress of the war. The Official Communiqués carry to a fine point the art of saying nothing of any importance.’ Naturally, people would have been desperate for information and one can imagine Parisians gathered around posters to read the speeches, announcements and call-ups.

These bills would have been posted on walls, hoardings, monuments and on the iconic Morris columns. These ubiquitous pieces of urban architecture, named after the printer Gabriel Morris, began to sprout up across France’s cities from 1855 and still pepper its streets, palimpsests of publicity and print culture.

The effectiveness of posters relied not only on key developments in industrialised production and chromolithography but also on mass literacy; for text-based posters to work, everyone needs to be able to read them. By the early 20th century, widespread literacy had been assured in France. Guizot’s law  of 1833 on primary education paved the way for Jules Ferry’s more comprehensive education act of 1882  which brought obligatory, free and secular primary education to children in France.

And what was being seen and read by French people across the country? This collection represents a cross section of the kinds of posters displayed during the war, varying from vibrant image-based posters to densely-printed transcripts of speeches and decrees. A wide range of themes are touched upon, from propaganda to appeals for donations, to local council announcements, each a unique prism through which to gain insight into the realities, norms and concerns of the time. Some highlight the startling difference between then and now, while others seem to reach across and reveal just how similar our realities are.

In contrast to Britain and the USA, France’s soldiers were not recruits but conscripts, so there are no equivalents of Kitchener’s or Uncle Sam’s famous pointing fingers in this collection. General mobilisation was announced in France in the first days of August 1914, solemnly calling up all men of fighting age: 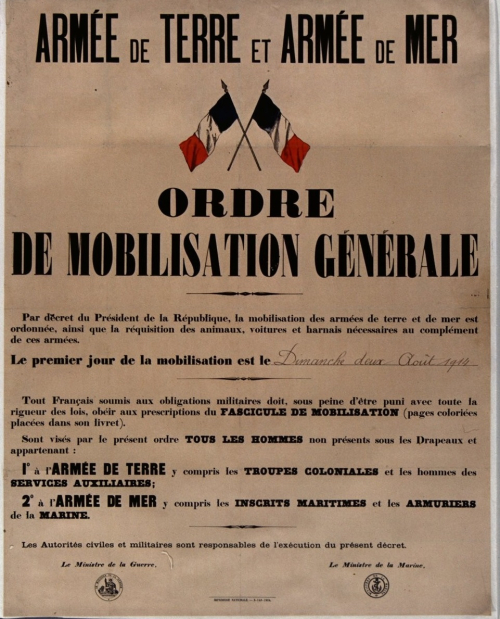 Official government announcement for general mobilisation. 2 August 1914. République française. (All poster images are taken from the collection at Tab.11748.a. A complete listing with fuller shelfmark details is in preparation.)

However, even though service was obligatory, there were still attempts to boost morale and stir national pride. This poster uses patriotic, energetic imagery to encourage Frenchmen to sign up for training programmes to arrive fit and ready for the front. 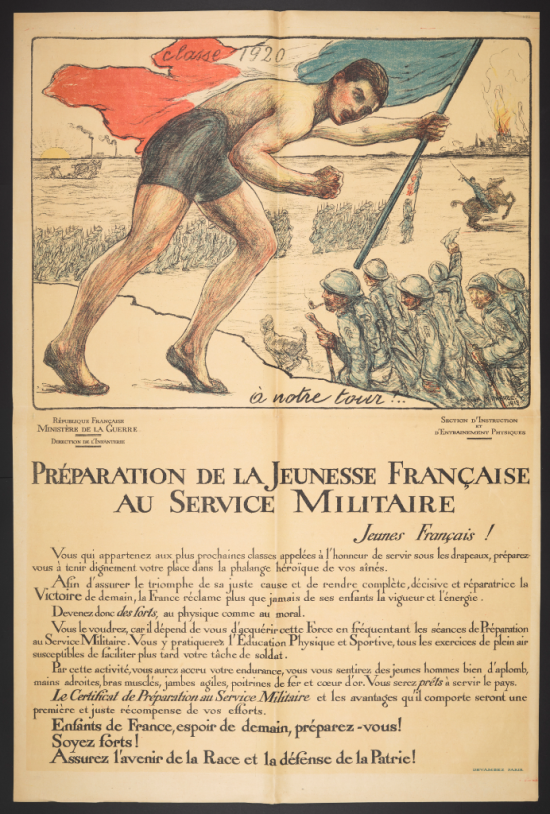 One of the most interesting kinds of posters, albeit less visually scintillating, are the state-issued posters for public dissemination announcing decrees and regulations under military law. They are to do with requisitions of all kinds of property including cars, horses, mules and even carrier pigeons for military use, summons to public commemoration such as the transference of the remains of Rouget de l’Isle, author of ‘La Marseillaise’, to the Hôtel des Invalides, and a great number are related to the sale of alcohol, absinthe in particular. 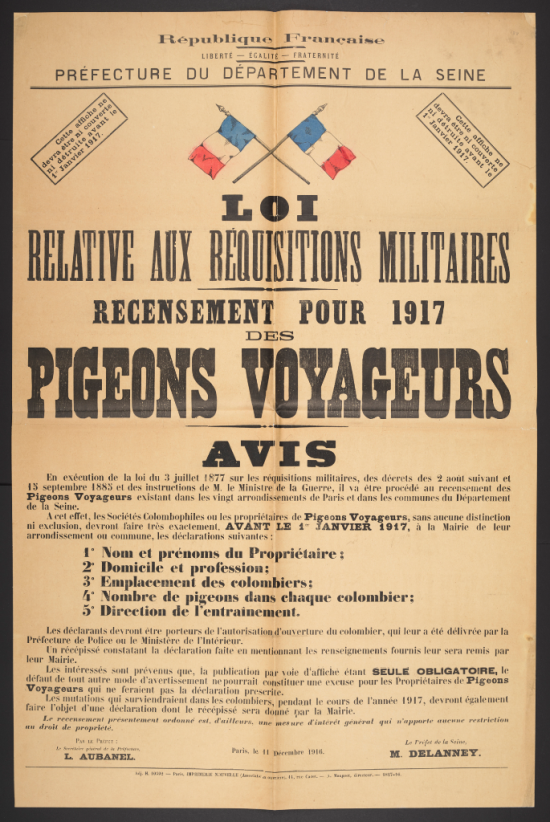 Announcement for requisition of carrier pigeons in the Seine department, 1917. République française. 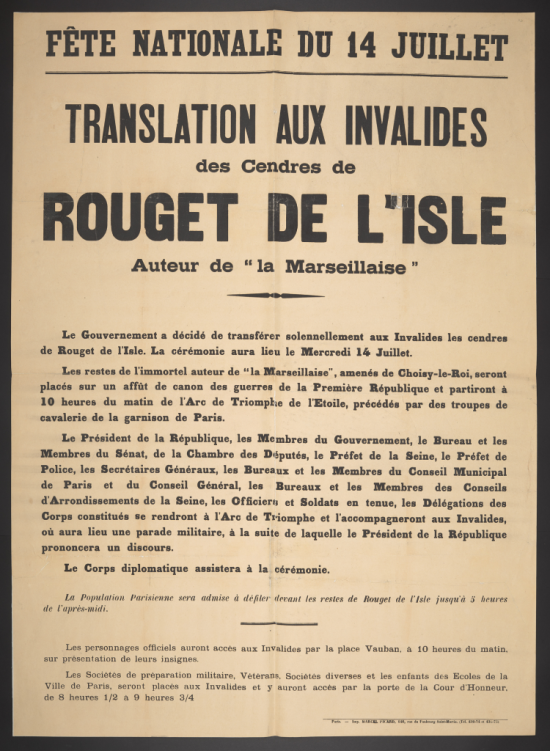 Commemoration of the transference of Rouget de l’Isle’s remains to the Hôtel des Invalides, Paris, 1915. 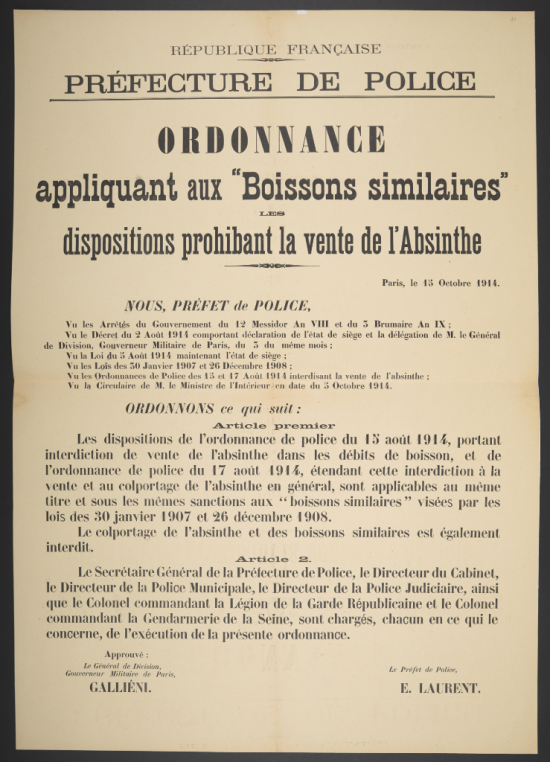 Regulations on the sale of alcohol and prohibition of absinthe, Paris, October 1914. Préfecture de police.

Among the more artistically appealing are the posters advertising war bonds. These raised the means to fund the war and later to help rebuild the country through liberty bonds. Each bank issued its own posters, sometimes engaging well-known artists to urge individuals to lend what they could to the state, at low fixed-interest rates. Their imagery is direct, persuasive and unabashedly patriotic. 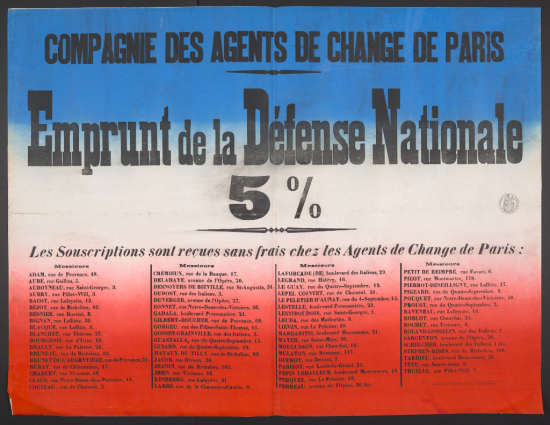 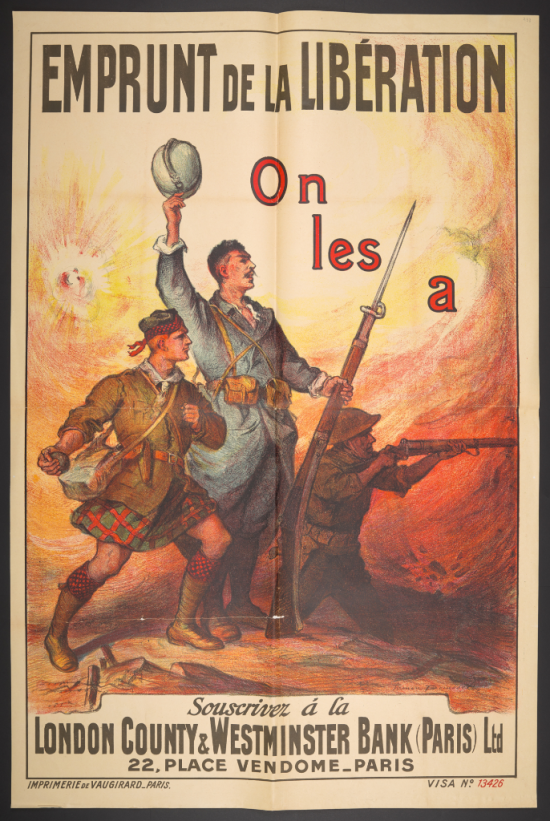 Posters appealing for funds and donations make up another substantial part of the collection, advertising galas, concerts and art exhibitions for various causes. They reveal the proliferation of charities and aid organisations from the outset of the war, all raising funds for different groups of people adversely affected by the war: orphans, wounded soldiers, POWs, families of soldiers killed in action, refugees and the poor. 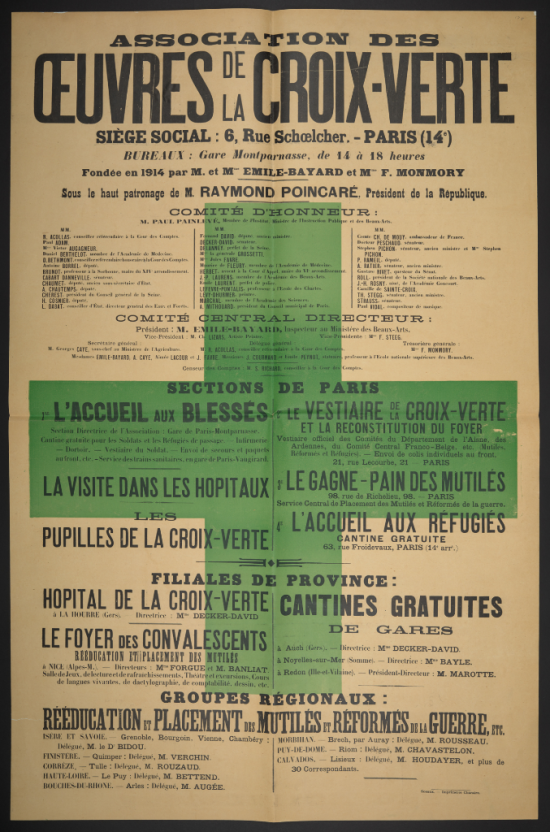 Poster for ‘La Croix-Verte’, a charity for wounded and returning soldiers, Paris, c. 1915. 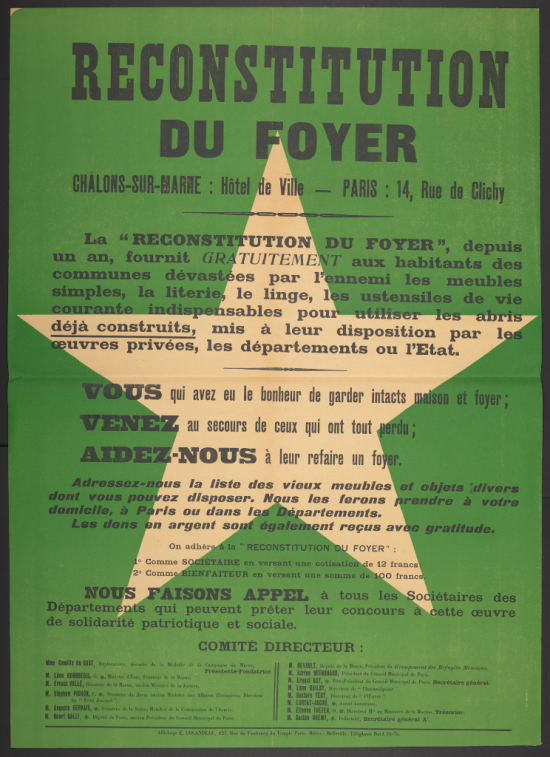 There is of course a number of anti-German propaganda posters, describing the cruelty and barbarism of the ‘Huns’, their violation of international treaties and their violence against civilian populations, often comparing them with the moral irreproachability of the allies. From the pamphlet ‘…et LA LUMIÈRE se fait…’ Law and justice versus the egotism and pride of Pangermanism. Paris, 1914-1918. 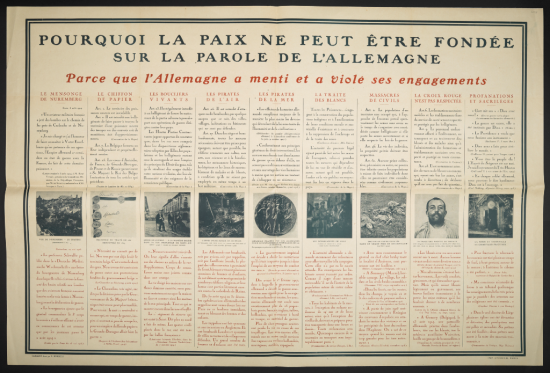 Anti-German poster detailing the atrocities committed by its government and armies arranged under nine headings. Paris 1915-1918.

There are also posters which have a more tangential connection to the war, such as this remarkable advert by Henri Montassier  for a serial by Régis Gignoux and Roland Dorgelès. His anthropomorphised tank takes less inspiration from contemporary tanks than those in H. G. Wells’ War of the Worlds. Another is the striking poster for ‘L’Exportateur français’, with its imposing silhouette and vibrant orange sky, an early example of the stylised art deco posters of the 20s and 30s. 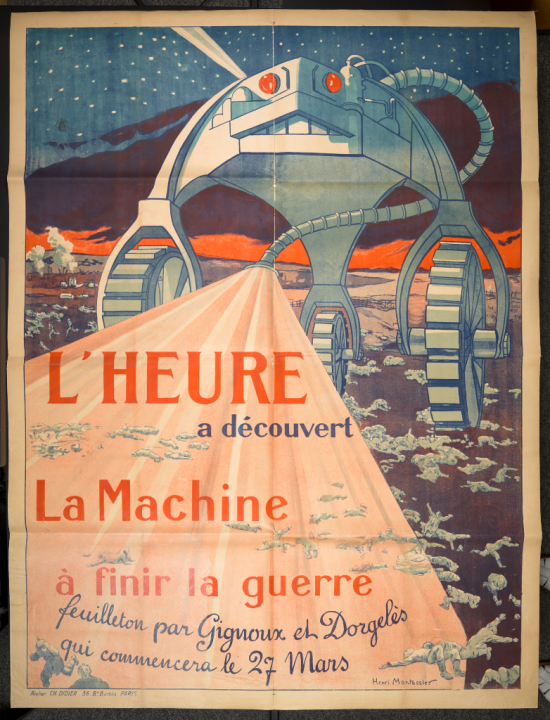 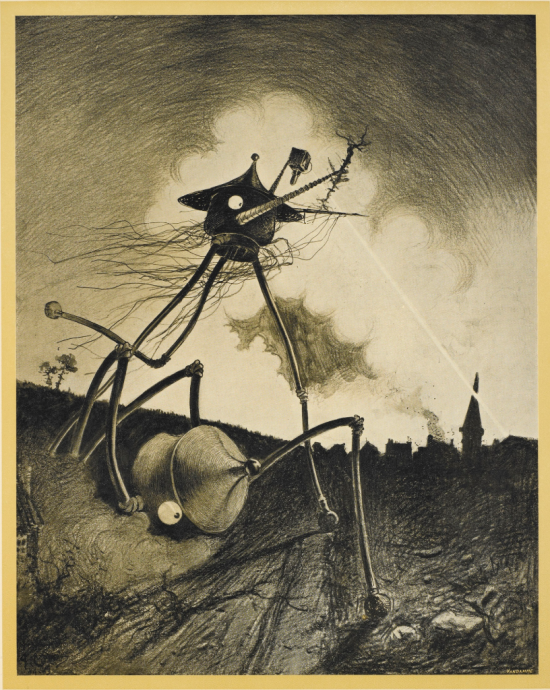 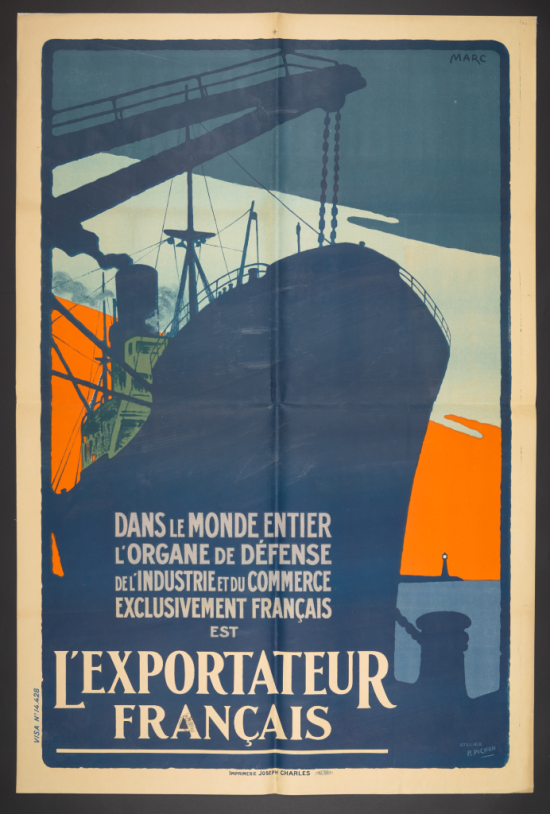 In Paris and cities throughout France, the sites that displayed these posters continue their functions, as do the Morris Columns, now adapted for cities’ evolving needs. They were taken over in 1986 by advertising giants JCDecaux, and have gradually been repurposed with dual functions; they are toilets, phone boxes, and some are even equipped with pollution-absorbing devices; ultra-modern but concretely connected to the past. Now, a century after the end of the war, the posters they once displayed reanimate the visual landscape and invite us to reimagine France’s urban theatres and the lives that took place within them.