‘In constant movement without an end’: the warp and weft of fashion research

Today marks the opening of the 35th London Fashion Week. The event will feature over 250 designers, whose avant-garde and experimental ideas will once again trickle down to our own wardrobes. ‘Where do designers find inspiration?’ we ask ourselves time and again. Can the key to finding new ideas for fashion design be found in library collections? Research is the foundation of any design process and a library is a wonderful resource to begin the search. While looking through a book or magazine, you may stumble on an image or a subject you may not have initially considered. There is something special about leafing, smelling or touching the book; experiencing the full potential of the visual stimulus it can offer. After all, books are objects that are themselves crafted and designed. Designers are always looking for something to utilise, from visual and literary to conceptual or narrative sources; obscure references that will make their work unique.

‘Things don’t come out of nowhere, they must come out of somewhere!’ says Vivienne Westwood, the iconic fashion designer. As an avid reader herself, in her 2017 talk at the British Library, Reading is important: Get a life!, Westwood reveals that she thrives on curiosity, finding out everything possible around any given subject, from classical Chinese poetry to mythical anthropology.

Last year the British Library organised a masterclass and show-and-tell to attract fashion students and for them to take part in the fashion design competition. They were encouraged to explore the Library’s collections for their inspiration and research. A final year student from University of the Creative Arts in Epsom, Elisabeth Nilsson, delved into the British Library European Studies Collections. Being Swedish herself, it was no surprise that Nordic themes were main inspiration for her two collections, Once Upon a Time and Under the Northern Lights. 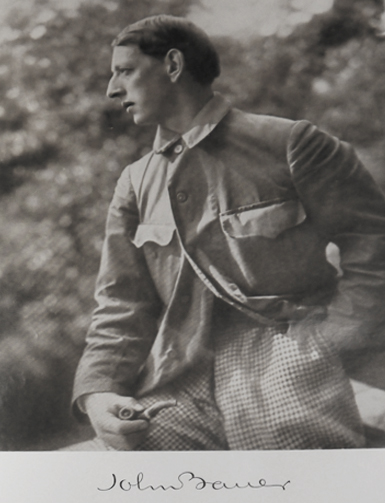 The Once upon a Time collection was inspired by the life of Swedish illustrator John Bauer  and his curious folklore painting, his family, and the jewellery that appear frequently in his illustrations. The collection features a masculine silhouette with subtle feminine undertones. The bold and structured shapes create the angular gaps that let the lighter fabrics flow through. Deep tones of black and blue colours are directly drawn from the illustrations of midnight, starry skies, while the texture is informed by Bauer’s portrayal of grotesque but humorous trolls. 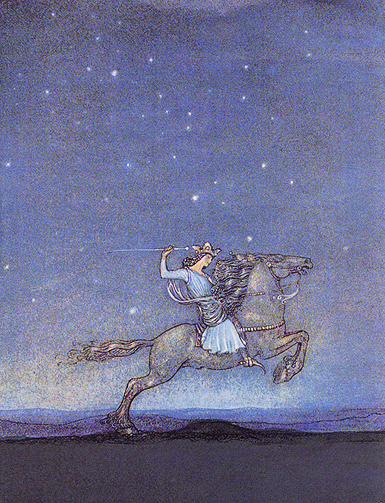 John Bauer was best known for his illustrations of the first eight volumes of Bland Tomtar och Troll (‘Among Gnomes and Trolls’), first published in 1907. He was born in 1882, in Jönköping. Throughout his life he suffered with depression and struggled with the direction in life. It is evident that Bauer was a prolific researcher himself, as some details of his work can be traced to the original folk costumes and medieval ironworks. Renaissance Italian painting was major influence on his artistic style. Furthermore, his work was greatly informed by his travels throughout Germany, Italy and Lapland, where he spend time with the Sami people. In 1918 John Bauer’s somewhat troubled life came to an abrupt end when the boat he and his family were travelling in sank. 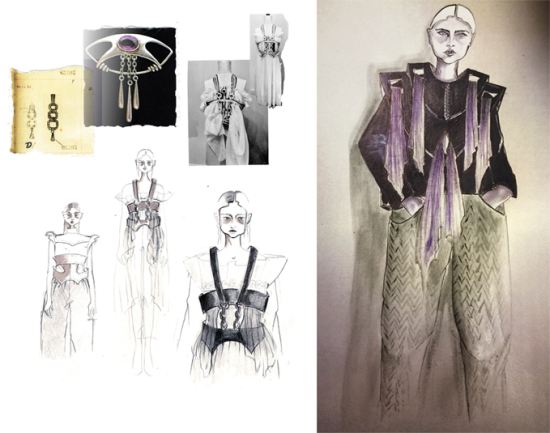 Design development and an illustration for the Once Upon a Time collection by Elisabeth Nilsson (reproduced with permission).

Elisabeth’s examination of every aspect of Bauer’s work and life is reflected in the sombre mood of the collection. She captures minute details, such as the artist’s tailored clothing, or jewels worn by trolls. It is precisely those details that trigger further searches for new references. Such as luxurious and finely crafted Art Deco style jewellery popular at that time. The bold combinations of well-defined lines and geometric shapes featured in decorative pieces, lend themselves well to Elisabeth’s further development of ideas and forms. 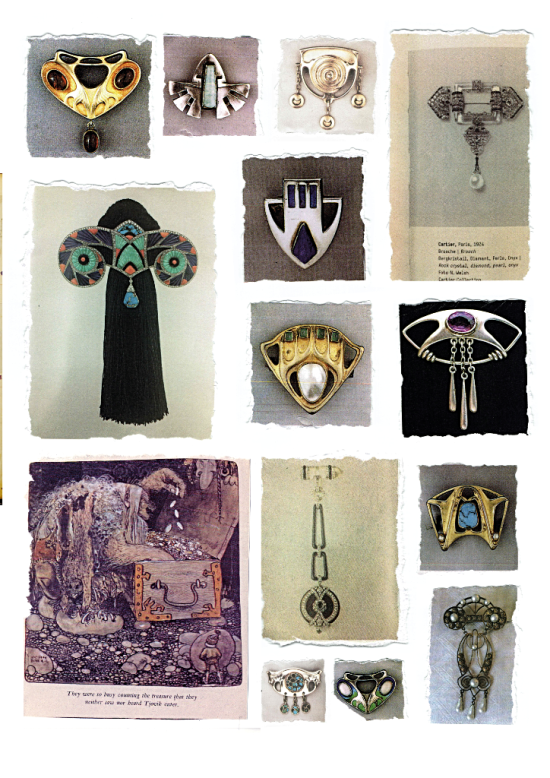 Inspirational images of Art Deco jewellery and trolls for the Once Upon a Time collection by Elisabeth Nilsson  (reproduced with permission.)

Inspired by Bauer, Elisabeth continued her exploration of the semi-nomadic Sami people. For over thousands of years, this indigenous ethnic group has inhabited Sápmi, the region that stretches across Norway, Sweden, Finland and Russia. The first detailed description of Sami culture can be found in Johannes Schefferus’ Lapponia, published in 1673. The Sami are mostly associated with reindeer-herding, but their crafts – duodji, and traditional clothing, gákti  – are worth noting. Colours, patterns, ribboning and embroidery are used to personalise the characteristics of the wearer, such as their family background or marital status. 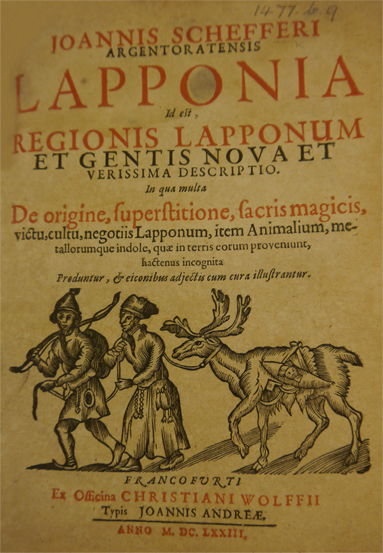 The Under the Northern Lights collection is informed by the innovative approach to the traditional Sami way of life. The juxtaposition of modern and traditional is reflected in the experimentation with fabrics and textures. Man-made reflective fabrics and metallic fibres are combined with natural wool and fur. This is further emphasised with the use of appliqué, embellishment and pleats. The Nordic concept is tightly held together by limited palette of blue, grey and white colours. The oversized silhouette is exaggerated by playful use of giant zig-zag embellishment and inside-out details. Perhaps Elisabeth’s approach to fashion research and design development echoes ‘the traditional Sami conceptions of time as a circle, to be cyclical and in constant movement without an end’ (Lundström: p. 14). 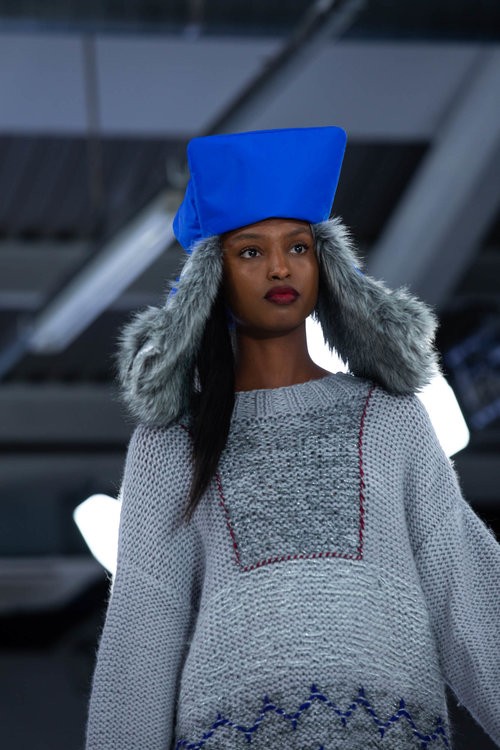