Earlier this year we marked the 400th anniversary of the Second Defenstration of Prague. As well as its implications for the government of Bohemia and for Czech culture, the Defenestration also came to be seen as the start of a conflict which raged through Europe for the next three decades. 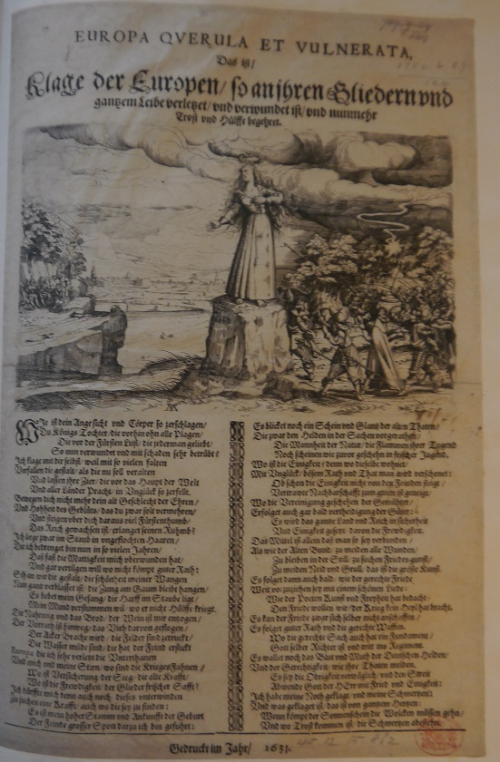 Europa querulata et vulnerata  1750.b.29.(124). An allegorical broadside showing Europe lamenting the wounds dealt to her by the war.

The Thirty Years War is reckoned to be one of the most destructive conflicts of the pre-industrial era, with estimates of up to three million fatalities. Issues of religious allegiance were key to its origins, with the Protestant states of the Holy Roman Empire rebelling against attempts by their Habsburg overlords to re-establish Catholic unity. But power politics could trump religious allegiance: for example, Catholic France at first covertly supported Protestant forces and later openly came out against their Habsburg co-religionists, more concerned about the growing power of the Empire than the advance of Protestantism.

Historians sometimes divide the war into phases based on the main antagonists involved. A collection of broadsides in the British Library contains material mainly from what is known as the ‘Swedish Period’ in the early 1630s, when the Swedish King Gustav II Adolf blazed a trail through Germany in support of the Protestant cause (but helped by French subsidies, and also hoping to gain valuable footholds on the southern Baltic shore for his own country). The broadsides all take the Protestant side, and Gustav, sometimes shown alongside his Protestant ally Elector Johann Georg of Saxony, is very much the hero. 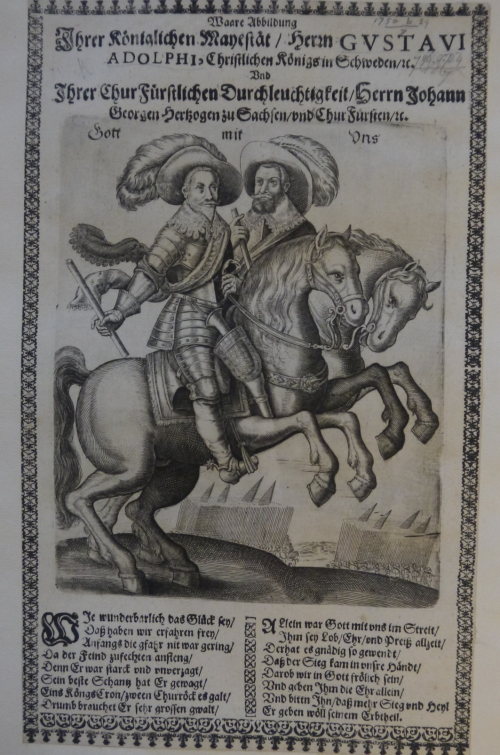 One broadside even shows the two leaders receiving the blessing of Luther himself. 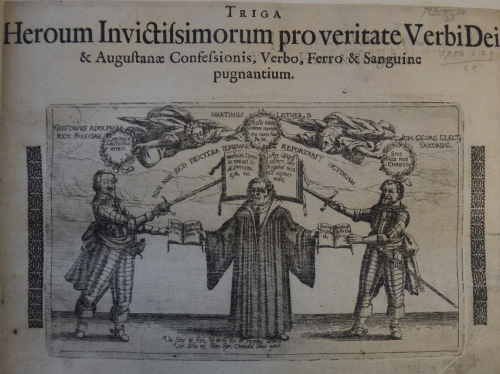 The success and extent of Gustav’s campaigns can be seen in broadsides depicting the number of towns he successfully captured between 1630 and 1631, from Stralsund on the Baltic to Stein am Rhein, now in Switzerland. 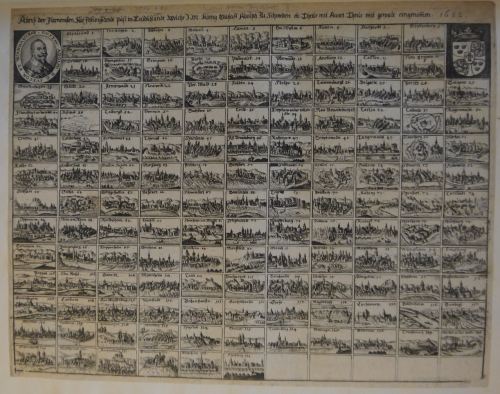 A cruder version of this theme shows Gustav forcing the Pope to vomit up the towns he has ‘devoured’. 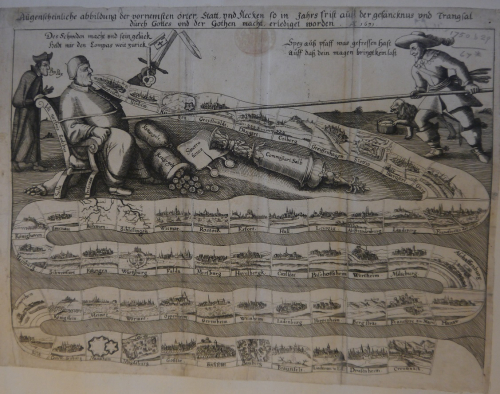 Other broadsides describe the Protestants’ capture of individual cities. A particularly ecstatic writer from Augsburg speaks of the day ‘when his Royal Majesty freed the worthy city of Augsburg … from the Pope’s tyrannical violence,’ (1750.b.29.(22.)) and a piece from Munich shows the city fathers doing homage to Gustav and handing him the keys of the city. 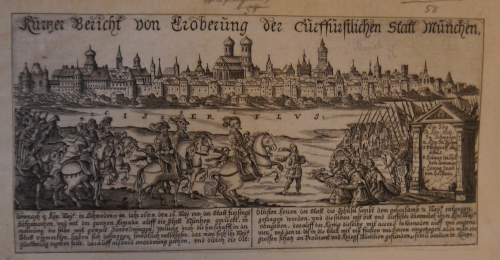 Another common theme is the Battle of Breitenfeld (usually called here the Battle of Leipzig) in September 1631, the first major victory of Gustav’s forces over the Imperial army commanded by Jean Terclaes, Count of Tilly. 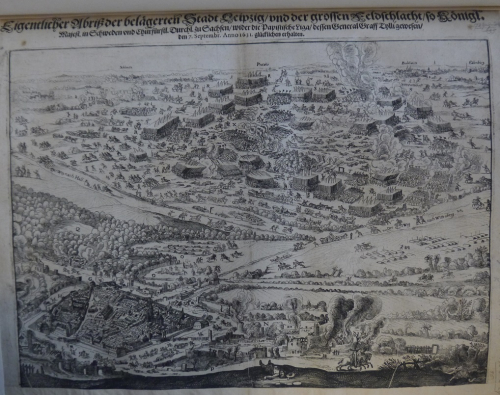 Several of the broadsides describe this as ‘Leipzig Sweetmeats’ or a ‘Leipzig Banquet’ served to Tilly by his victorious opponents. One such satire hints at the suffering that the conflict was bringing to Germany’s poorest: two peasants explain that they cannot bring wine to the feast as requested, because ‘everything is lost, not a single bushel of corn is left‘. Instead they bring a selection of farm implements for Tilly to use as cutlery at his ‘banquet‘.

A handful of broadsides use the form of a rebus such as this satire on Tilly. 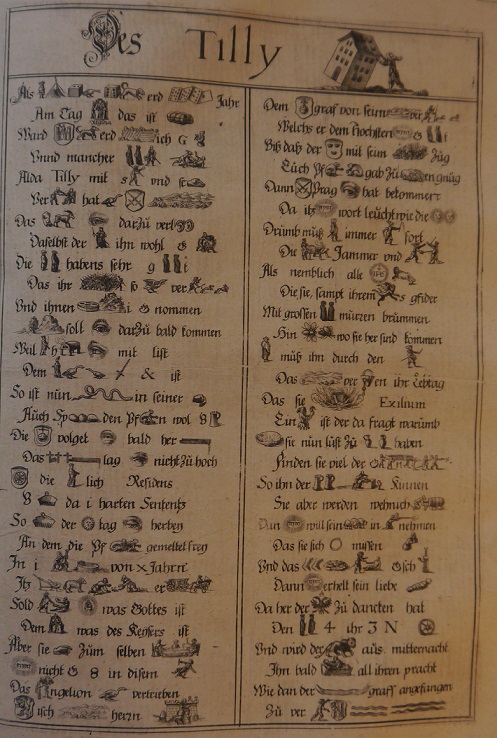 These can be difficult to decipher and interpret, as can the many allegorical images in the collection. Even those with extensive explanations tend to defy understanding by any but specialists in the period, although one of the more straightforward shows Gustav shooting a hawk, representing Tilly, as it attacks the peaceful dove of the true church. 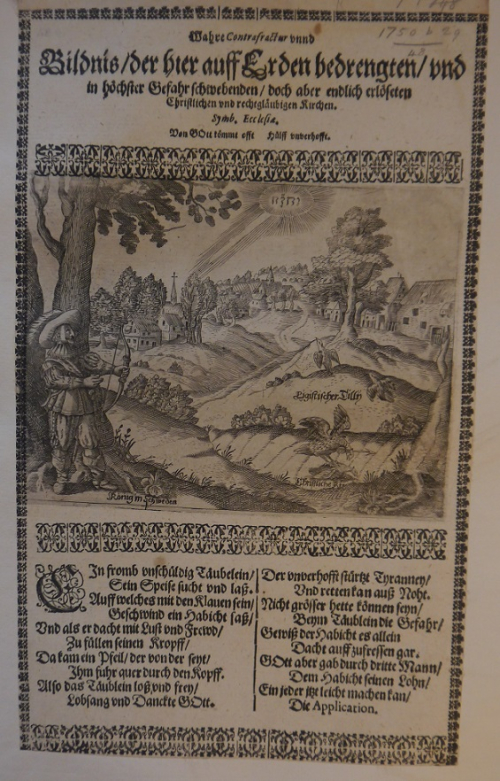 Tilly was a particular hate figure among Protestants, not least because of his siege and brutal sack of the city of Magdeburg, the subject of several broadsides in the collection. One such is a plan of the city showing the damage caused by Tilly's troops. 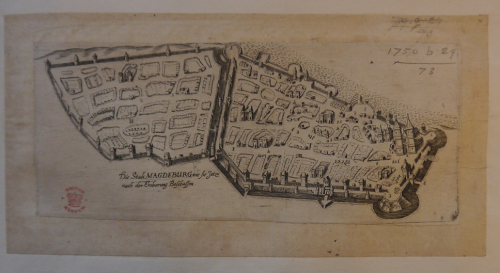 In another broadside, one of Tilly’s soldiers laments the suffering the Imperial army has caused – murder, theft, looting, rape. This again hints at the damage caused to ordinary people by the conflict, but the main propaganda point is the greater virtue of the Protestant cause rather than the suffering of the war’s victims. The soldier resolves to leave Tilly’s army and become a ‘Christian soldier’ fighting with Gustav and Johann Georg; in reality, of course, he would have no doubt continued to commit similar crimes in their name. 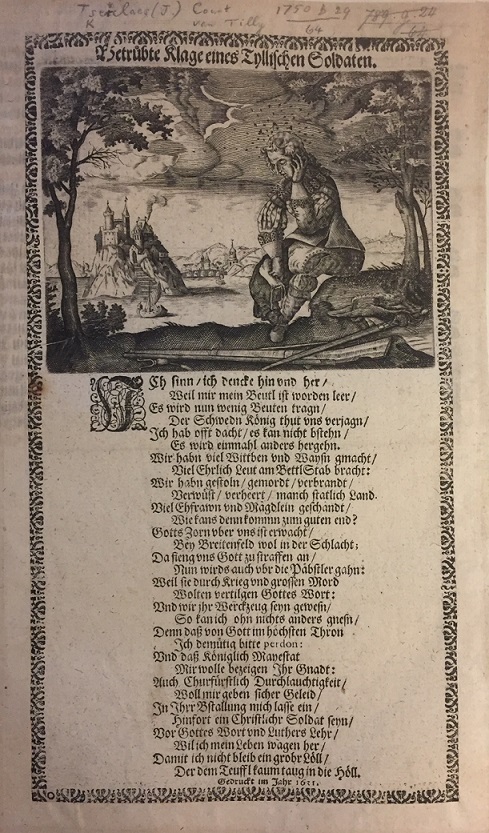 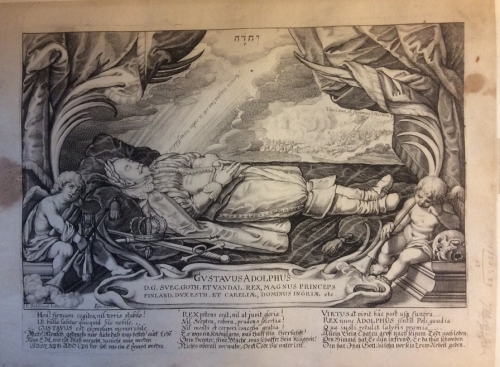 Despite the loss of such a brilliant and charismatic leader, the Swedes won the day at Lützen and remained in the war until it ended in 1648, soon fighting openly alongside the Catholic French. Johann Georg, however, sued for peace with the Emperor in 1635. The Protestant alliance between the two, celebrated in so many of these broadsides was a short lived one.