A long-lived Spanish book and a short-lived English king 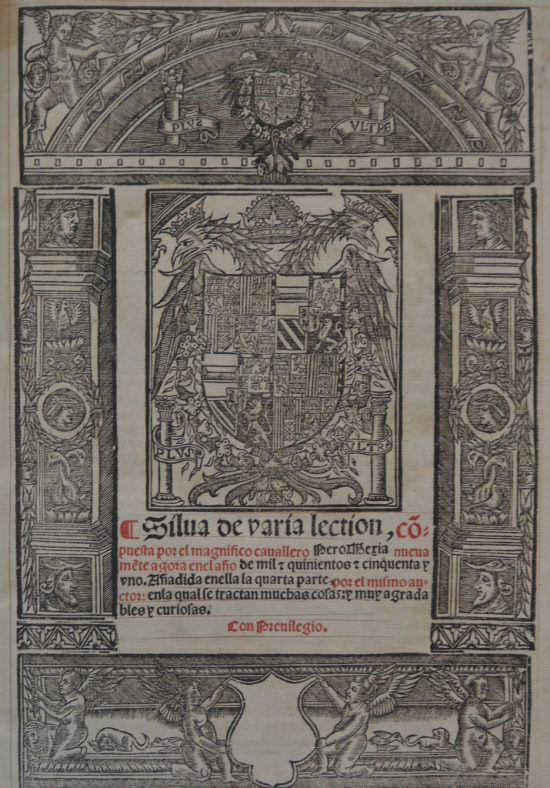 John Gough Nichols in his Literary Remains of King Edward VI (London, 1857; C.101.c.2.) gives a small ‘catalogue of such of the books in the Royal Library now preserved in the British Museum’ (pp. cccxxv-cccxxxviii), including:

The manuscript inscription from the last leaf of Silva de varia lection ...

These lines resemble so much King Edward’s best hand that they may have been regarded as his. On the sides of the book are impressed these arms, in colours – Gules, on a chevron between three fleurs-de-lis or as many hurts, which render it a doubtful whether this was really one of the King’s books.

In the British Museum Library’s main catalogue of printed books (known as ‘GK’) this hardened to: “On the verso of the last leaf is written an Italian proverb, most probably in the handwriting of Edward VI., to whom the volume belonged.”

If Nichols was sceptical, T.A. Birrell was even more so: as he points out, the ‘E VI’ on the spine need mean no more than that the book was printed in his reign (p. 13).

And what could be less revealing of identity than a fine Italic hand?

The Tudors were all good linguists. Edward’s Greek and Latin were excellent, possibly better than his French: “conversing with him in Latin, Edward asked [Hieronymus] Cardano about his recent book which had been dedicated to him. There then ensued a debate upon the nature of comets, during which Cardano considered Edward ‘spoke Latin as politely and fluently as I did’” (Skidmore, p. 240).

I’ve no evidence of his knowledge of Spanish. There are no manuscript annotations in (t)his copy of Mexia, before you ask.

Whether this copy was Edward’s or not, it was a much-read book in its time throughout Europe. It’s a compendium of miscellaneous, curious knowledge, some of it useful and some of it useless (if knowledge is ever useless). Subjects include: did early men live longer than the moderns? The history of the Turks (a hot topic in 1540); the history of the Amazons; why a small head and broad chest is a bad sign; do mermen exist? Who was the first person to tame a lion? And many many more.

It attracted the attention of the Inquisition, who demanded the chapter on Pope Joan (I, ix) to be expurgated. What to me is interesting is not only the number of editions but that Mexia fell from favour in the 1670s and had disappeared by the 1680s.

Birrell charmingly calls it a “bedside book”, and although I don’t actually keep it by my pillow, I can attest from personal experience that it’s certainly good to dip into.