Around the 3rd of October I visited the current display of items from the archives of Michael Palin in our Treasures Gallery, where the scene with ‘The Knights Who Say “Ni”’ from the film Monty Python and the Holy Grail sprang to mind. The leader of the Knights, played by Palin, tells the hapless King Arthur that if he fails to deliver a nice-looking (and not too expensive) shrubbery he ‘must cut down the mightiest tree in the forest, wiiiith…. a herring!’

I knew I was going to have herring with white bread and a hot pot of vegetables at the party that Friday to celebrate The Relief of Leiden, when the Sea Beggars brought barrels full of salted herring with white bread (a luxury for most people at the time) to the starving citizens of Leiden, on 3 October 1574. The city had lain under siege from the Spanish for five months and food had pretty much run out. 6,000 of the 15,000 people living in the city at that point had died. The population had come close to rebellion and demanded the surrender of the city at a meeting of the town’s council on 8 September. 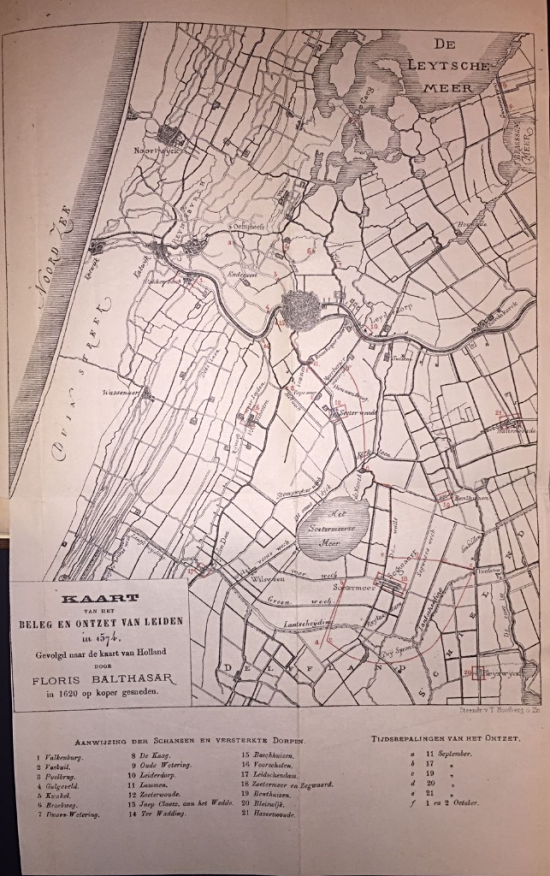 The councillors were faced with the difficult task of keeping the peace, whilst also persuading the desperate citizens to hold on just a bit longer, for they knew that help was on the way.

That confrontation went down in history as one of the most dramatic events of the siege. The drama came from Burgomaster Pieter Adriaansz van der Werff (1529-1604) who offered his own body as food for his people, in an act of utterly unselfish heroism. However, it turns out that this was a bit of a red herring. 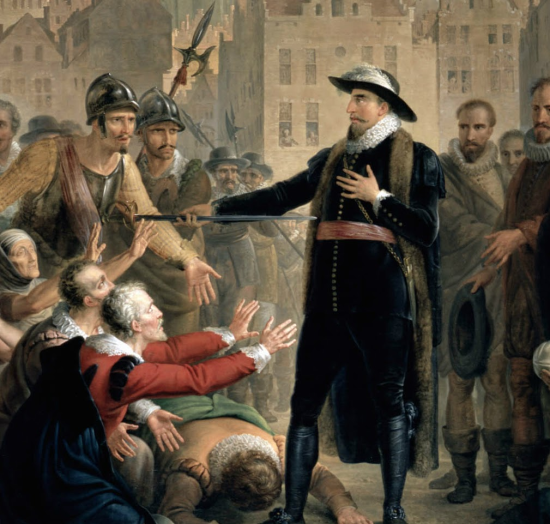 The story of the self-sacrifice of Burgomaster Van der Werff first appeared in the second edition of Jan Fruytiers’ Corte beschrijuinghe van de strenghe belegheringhe ende wonderbaerlijcke verlossinghe der stadt Leyden in Hollandt ... (‘Short description of the severe siege and miraculous relief of the city of Leyden in Holland….’) 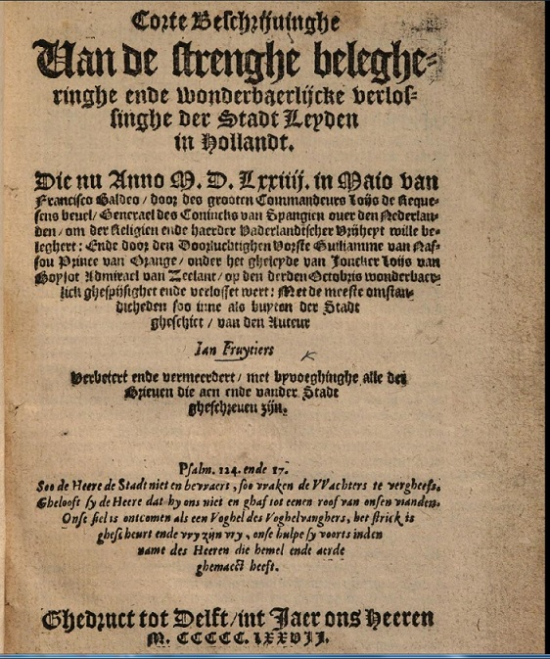 Funnily enough, Van der Werff had not featured in the first edition of the Corte beschrijuinghe, published in 1574. This may have something to do with Jan van der Does, also known as Janus Dousa. He had been commander of the city’s defence forces during the siege which put him well into the thick of it, alongside Van der Werff. He also happened to be a poet. 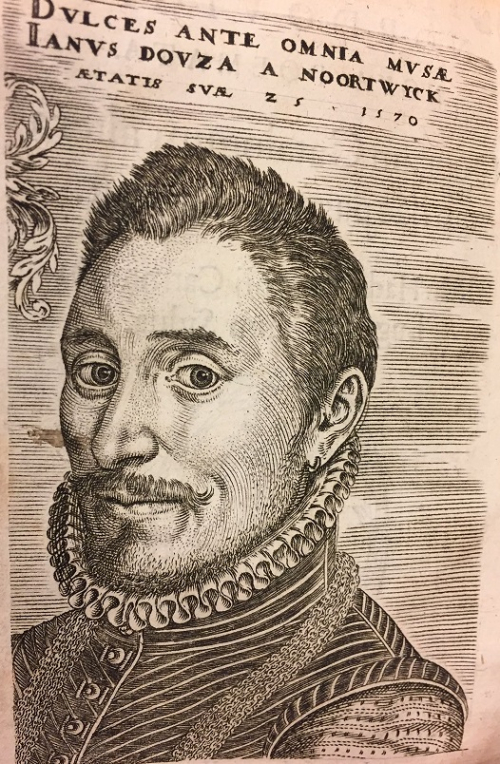 In 1575 Van der Does published Odae Lugdunenses in which he criticises the conduct of Van der Werff and some of his colleagues, accusing them of contemplating surrender to the Spanish. Quite the opposite of heroic behaviour! 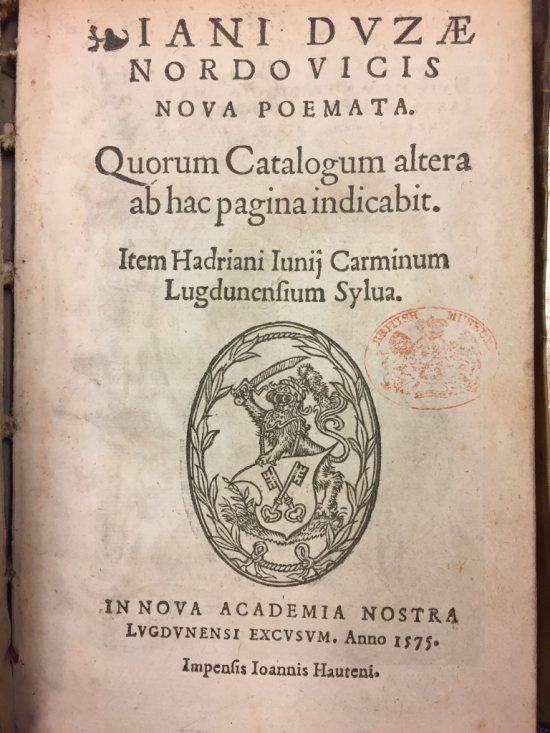 This volume was printed on the press of the brand new University of Leiden, bestowed on the city as the first university in the Northern Netherlands in 1575, by Prince William of Orange, in gratitude to the people of Leiden. (Or so the story goes – we actually have no evidence of this.) Van der Does was its first librarian.

The second edition of Fruytiers’ Corte beschrijvinghe…. appeared two years later, in 1577. The story of Van der Werff’s heroism was reprinted in the 1646 as well as in the 1739 (augmented!) editions and so  lodged itself firmly in the collective memory of the Dutch about the siege.

Is it too far-fetched to think that the burgomasters nudged Fruytiers to write a ‘revised’ edition of the Corte beschrijvinghe, adding the self-sacrifice story, as a red herring to distract from their past conduct? We will probably never know the truth.

But never let the truth get in the way of a good story! And what a story it is, even without Van der Werff: the siege, the hunger, the radical decision to inundate the land, and the daring actions of the Sea Beggars; what drama! No surprise then that the play Belegering ende het Ontset der Stadt Leyden by Reynerius Bontius became the most popular play in the second half of the 17th Century. First published in 1645 it saw no fewer than 111 editions up to 1825 and numerous performances well into the 19th Century. 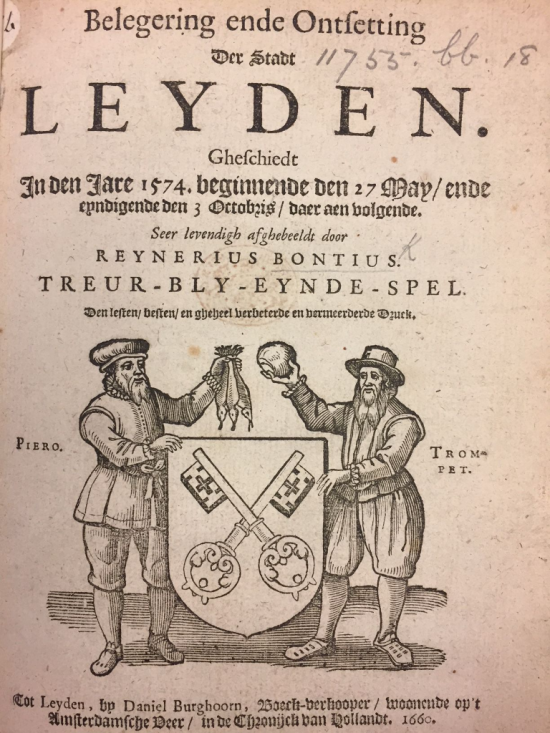 Bontius himself and many editors after him changed and added to the play, undoubtedly adding to the myth-making, until it became quite something different from the original. It was not performed much in the 20th Century, the most recent performance took place in 2005. It had become somewhat stale, like white bread a few days old.

What does not get stale, however is the party on 3 October, when Leiden and many places beyond celebrate Leiden’s Relief with white bread, hutspot and … herring!!! 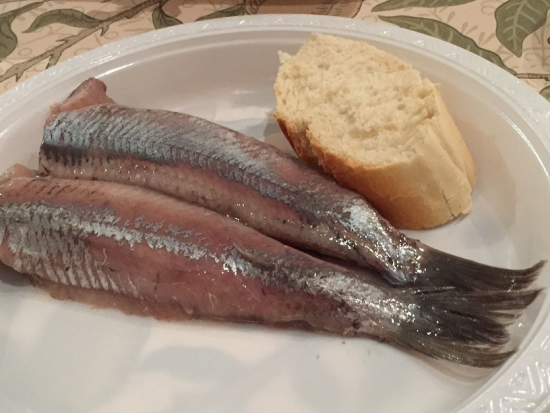