Throughout the early 19th century, the contrast between the glories of ancient Greece and the servile humiliation imposed on modern Greeks by the Ottoman Empire was a frequent theme for poets there and abroad. Lord Byron, before going off to join the cause of Greek independence, lamented in his poem ‘The Isles of Greece’:

'Tis something, in the dearth of fame,
Though linked among a fettered race,
To feel at least a patriot's shame,

while in Germany Friedrich Hölderlin was writing in his novel Hyperion of the struggles of a young Greek to raise awareness of his country’s plight and find a place in the wider world. The fight for national autonomy and liberation, however, was just one aspect of the Greek endeavour to recreate the splendours of past ages. As well as its reputation for freedom and democracy, ancient Greece had been renowned for the richness of its language and literature and the prowess of its athletes as displayed in its many festivals, including the Isthmian, Delian, Pythian and, of course, the Olympic Games. 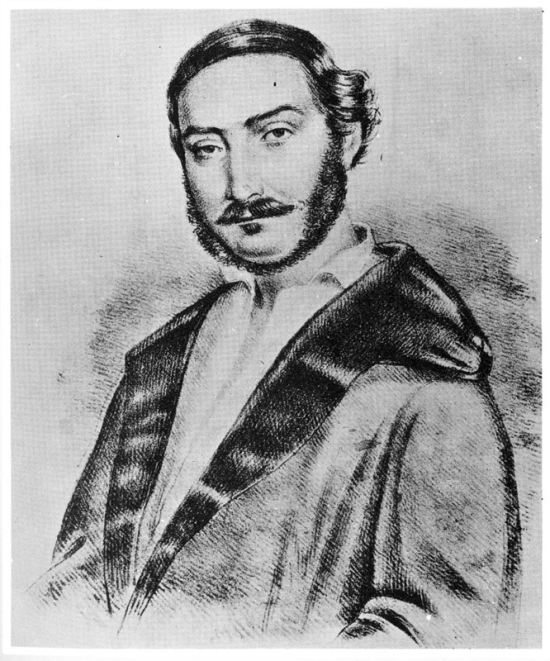 It was in this field that the poet Panagiotis Soutsos was especially active. Born in 1806 in Constantinople, he belonged to a distinguished family of Phanariote origins, with a brother, Alexandros, and a sister, Aikaterini, who were also writers. This privileged background enabled the brothers to study at the famous school of Chios under Neophytos Vamvas, who translated the Bible into modern Greek, and to enjoy opportunities to travel unusual among Greeks at that time. In 1820, on the death of their father, they joined their uncle in Transylvania, and set out to Paris with a letter of introduction from him to Adamantios Korais, a leading figure in the Greek Enlightenment whose linguistic work laid the foundations of a purified form of the language known as Katharevousa. It was in this that Soutsos wrote the first version of his poem Ὁ Ὁδοιπόρος (‘The Wayfarer’) in 1831, although the subsequent ones of 1842, 1851 and 1864 included increasing numbers of archaisms. This ‘tragedy in five acts’ is in fact a poem in dialogue describing the love of the Wayfarer and his sweetheart Ralou and their tragic end, and is regarded as one of the seminal works of the First Athenian School which flourished between 1830 and 1880 in Athens and the Ionian Isles. Because of the origins of many of its members, it was also known as the Phanariotic School. 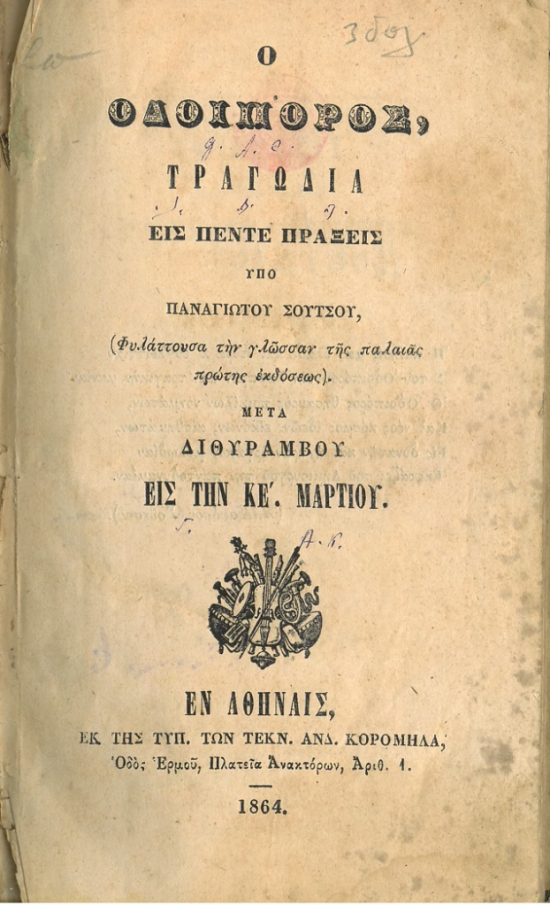 Of equal importance was Ὁ Λέανδρος (‘Leander’) in 1834, a novel which adopted the epistolary form used by Hölderlin and comes to a similarly pathetic conclusion as the hero writes to his friend Charilaos, ‘Hear the hour of midnight, signifying: This is the hour of my death; I am coming, death! Why are you calling me? I am coming. I take up my weapon…’, typical of the Greek Romantic movement in its patriotic theme and the influence of French Romanticism. 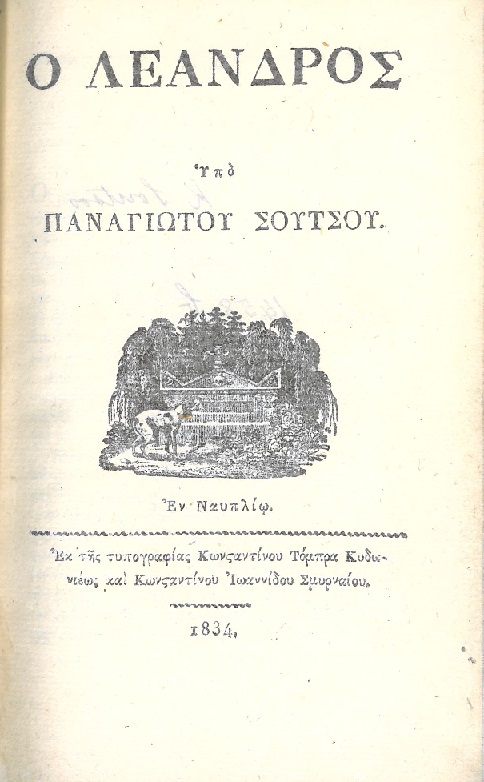 It was prudent of Soutsos to concentrate on his literary activities, as his professional life was not a success. Settling in Nauplion (Nafplio) in 1833, he embarked on a political career and was appointed secretary of the senate by Ioannis Kapodistrias, but lost his position through his outspoken opposition to the latter’s policies. In any event, his progress was blocked by the heterogeneous law of 1843, barring citizens born in occupied territories from employment in the public sector, and his political views became increasingly conservative.

However, in the year of his arrival in Nauplion, then the capital of the newly-independent Greek state, he wrote a poem with still more far-reaching effects. Its title, ‘Dialogue of the Dead’, recalls Lucian of Samosata’s work of a similar title, and it portrays the spirit of Plato returning to Greece to gaze upon it in despair with the words: ‘Where are all your theatres and marble statues? / Where are your Olympic Games?’ Two years later, he followed this up with a letter to the Greek Minister of the Interior, Ioannis Kolettis, proposing that 25 March, the anniversary of the outbreak of the Greek War of Independence, should be declared a national holiday, marked by festivities including a revival of the ancient Olympics. Early the next year a wealthy Greek merchant based in Romania, Evangelis Zappas, offered to fund the Olympic revival, complete with cash prizes for the victors. On 13 July 1856 Soutsos published an article unveiling Zappas’ proposal to the public, and on 15 November 1859 the first modern Olympic Games took place in Athens.

It was not only in politics that Soutsos stirred up controversy. His cosmopolitan outlook and French contacts had made him aware of Ernest Renan’s Vie de Jésus (1863), and his second novel, Charitine, or The Beauty of the Christian Faith, subtitled ‘Antidote to the nonsense of Ernest Renan against the deity of Jesus Christ’ (Athens, 1864; 4823.aa.43) launched an impassioned attack on it, as might be expected from the author of The Messiah, or the Sufferings of Jesus Christ. 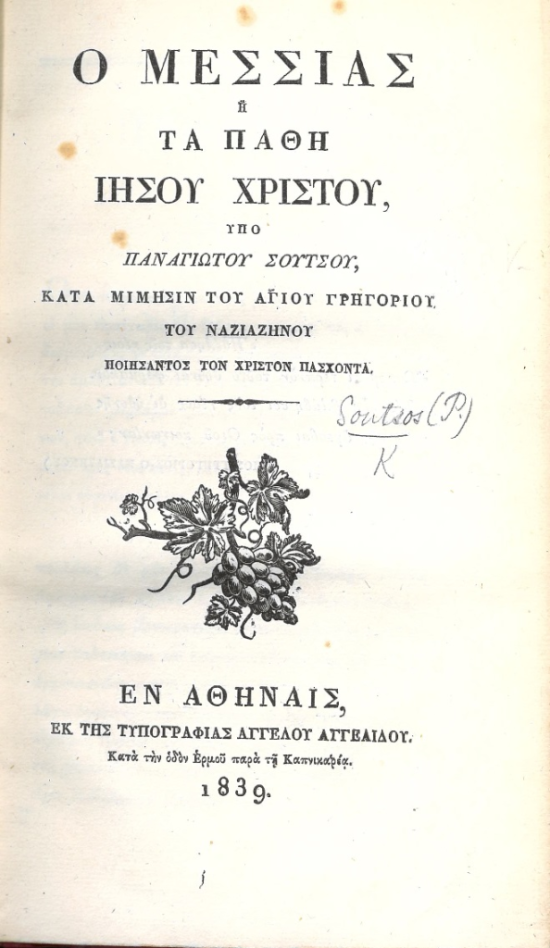 In linguistic matters, too, Soutsos provoked disputes. In 1853 he expounded his opinions on language in his essay New School of the Written Word, or Resurrection of the Ancient Greek Language Understood by All, advocating the revival of Ancient Greek and dismissing Demotic Greek as not universally intelligible. The academic Konstantinos Asopios retaliated with The Soutseia, or Mr Panagiotis Soutsos scrutinized as a Grammarian, Philologist, Schoolmaster, Metrician and Poet, leading to a torrent of pamphlets by other scholars all exposing one another’s alleged shortcomings and promoting their own systems.

Despite this and the trials of increasing ill health, financial losses and marital troubles, by the time of his death on 25 October 1868 Soutsos had seen his Olympic vision realised and his work translated into German as early as 1844 – a further chapter in the mutual fascination between Greece and Germany throughout the 19th century. 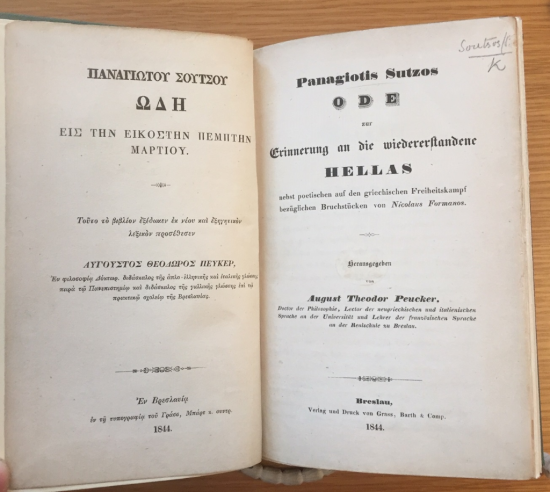