From Culinary Staple to Prophetic Symbol: More on the Herring

Regular readers of our blog may have noticed something of a herring theme this year, from the significance of the herring in Nordic culture to its symbolic and celebratory consumption at the Dutch festivals of Flag Day and the anniversary of the Relief of Leiden. But so far we have not yet looked at the herring in Germany and on the Southern Baltic shore, particularly as imagined and lived by Günter Grass.

In Grass’s Die Blechtrommel (The Tin Drum), Agnes Matzerath develops an unhealthy compulsion to eat fish, following the horror of seeing a horse’s head used to catch eels, consuming and force-feeding herself the very thing that has become monstrous to her. Set against the backdrop of rising National Socialism, Agnes’s eventual death by fish-poisoning cannot be separated from the social and familial mutations she experiences in 1920s Danzig.

Elsewhere, however, fish is dealt with far more fondly by Grass, while always remaining focal. In his autobiography, Beim Häuten der Zwiebel (Peeling the Onion), Grass’s memories often carry the odour of fried herring, a staple during his time at the School of Fine Arts in Berlin, much to the disapproval of his teacher Karl Hartung, who ‘[took] offence at the smell of fried herring wafting through the door connecting his studio to ours’. Even his description of the first months with his then girlfriend, Anna, includes, alongside the sentimental, the intimate and the erotic, the memory of showing the uninitiated cook ‘how simple it is to remove the flesh from the bones of a fried herring.’ Romance Baltic-style… 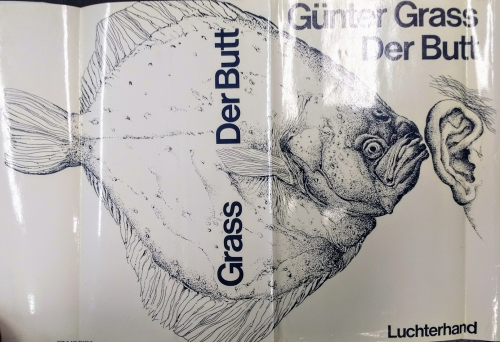 Dust Jacket of Der Butt, with Grass’s own design

But it is in his Der Butt (The Flounder) where the herring—and essentially all Baltic peasant food from the Neolithic to the 20th century—gets a platform. It contains, woven into the epic history of women and food, recipes and other gastronomic tips, because for Grass, who thought the planting of potatoes in Prussia ‘did more to change society than the Seven Years’ War’, this was a people’s history that had not yet been written.

Grass here is on one level writing the anti-‘Babette’s Feast’. Karen Blixen’s/Isak Dinesen’s 1958 short story introduces an exceptional Parisian chef into the remote Norwegian town of Berlevåg (or the west coast of Jutland, if you’re watching the 1987 film), who wins a lottery, enabling her to create an exquisite French menu without a herring in sight. However, most of the local guests—refined as they are—react indifferently to the meal, which is perhaps another implicit win for the herring. 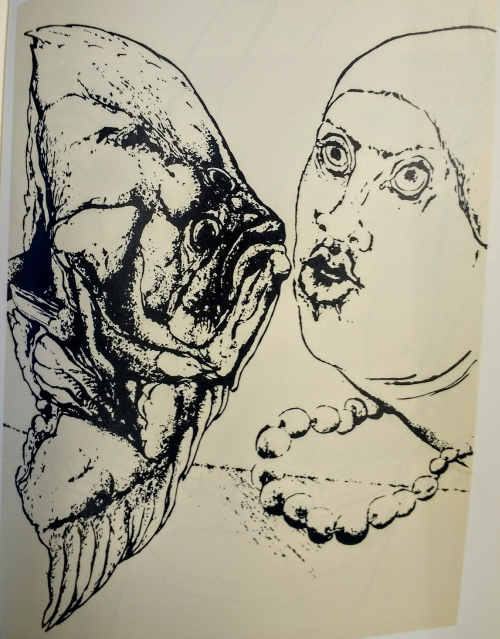 The second book of Der Butt contains a chapter entitled ‘Skåne Herring’, in which the domestic hell suffered by the husband of the mystic and visionary (not yet Saint) Dorothea von Montau, brings about a visit from the religious and political powers that be. Dorothea serves the four visitors Scania herring (Scania was dominant in the herring market in the 14th century) but not before Grass’s omniscient narrator cuts in to detail the variations of prepared herring: ‘They can be used fresh, salted, smoked, or marinated. They can be boiled, baked, fried, steamed, filleted, boned and stuffed, rolled around gherkins, or placed in oil, vinegar, white wine, and sour cream.’ Grass details how each of the women cooks he follows in his epic would have prepared the herring before telling us that Dorothea ‘bedded twelve Scania herrings on ashes strewn over the coals, so that without oil, spices, or condiment of any kind, their eyes whitened and they took on the taste of cooked fish.’ The authorities—Abbot, Commander, Doctor of Canon Law and Dominican—all approve.

Following Grass’s imperative to (re-)collect food history in his ‘narrative cookbook’, we find that two years after the publication of Der Butt the British Library felt compelled to acquire an actual herring cookbook from Sweden, Strömming och Sill. Both words in the title refer to herring, strömming to the smaller, less fatty herring caught in the Baltic, and sill to the Atlantic and North Sea varieties. Strömming might be more familiar with its prefix sur- which describes the debatably edible fermented variety. Sur- means sour in this case, although we can’t help but think of French preposition meaning ‘over’: for many, fermented herring is indeed a step or two beyond. 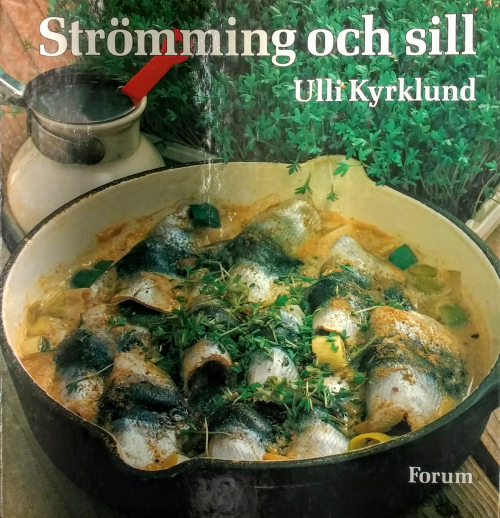 We’ve somehow managed to talk about Der Butt without mentioning the presence of a talking flounder… but Grass’s penchant for rendering fish either monstrous, as in Die Blechtrommel, or magical, as in Der Butt, recalls another literary oddity which deserves mention. The herring was also the protagonist in a number of 16th- and 17th-century works within Rosicrucianism and numerology. In 1587, like Grass’s omnipotent flounder, a few miraculous herring began to communicate. 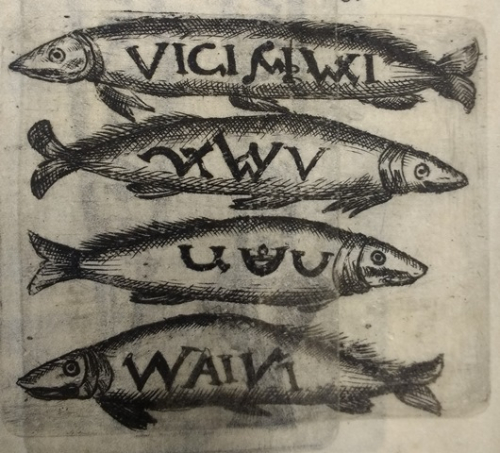 Johann Faulhaber’s Vernünfftiger Creaturen Weissagungen attempts to describe the significance of a miraculous deer and some even more miraculous herring and other fish through the secret numbers of the Book of Daniel and the Apocalypse. Following the descriptions of Raphael Eglinus’s Prophetia Halieutica nova et admiranda (Zürich, 1598; 1020.f.1.(3.)), Faulhaber tells us of two herring caught on the same day, one in Denmark, one in Norway, on both of which appeared strange coded markings, ‘as if imprinted by God’s finger.’ We can’t help but agree with his assertion that this is a miraculous occurrence. 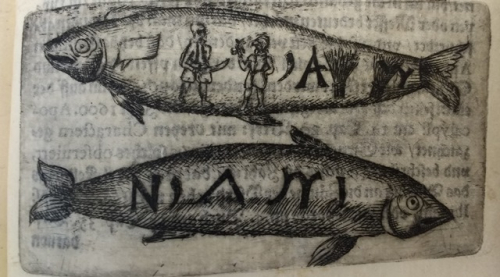 The book was written in 1632, halfway through the Thirty Years’ War and, crucially, two years after Sweden’s King Gustav Adolph, to whom the book is dedicated, joined the conflict. Faulhaber sees correspondences in all the mystical fish, the dates of comets, the secret numbers in the Bible and the political situation in Northern Europe. The markings are decoded to show swords, sickles, and other signs that correlate with historical events. Faulhaber’s deer somehow comes to represent the entry of Gustav Adolph into the war, while the herring might spell out the spilling of more blood.

Four centuries later, something about these miraculous herring of Faulhaber and Eglinus is caught in the fish-paintings of Paul Klee. 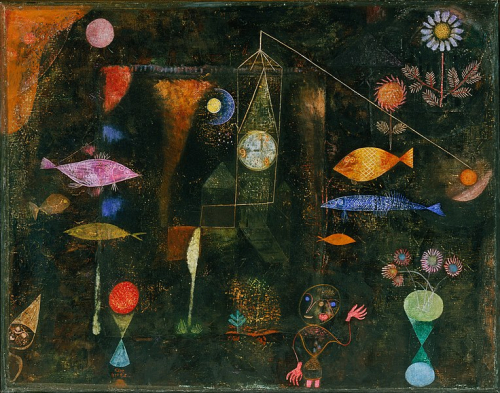 Klee’s Fish Magic or Around the fish, suspend the fish (although we can’t identify a herring, we can forgive Klee as a landlocked Swiss, no doubt used to freshwater fish) amidst a set of enigmatic symbols that gesture towards signification without the finality of Faulhaber’s correspondences. In herring-art, we see the full range of depictions that is also encapsulated in academic and literary attempts to understand both the sheer facticity of the Northern armies of herring and the idea of herring, their potential meaning.