Hold the entire Bible in your head!

There have been schemes stretching back to Antiquity for making it easier to retain information in our heads. Many memory practitioners recommended word-image association: conjure up an architectural edifice in your mind and place a nugget of knowledge in each niche.

This memory book, however, is entirely verbal. 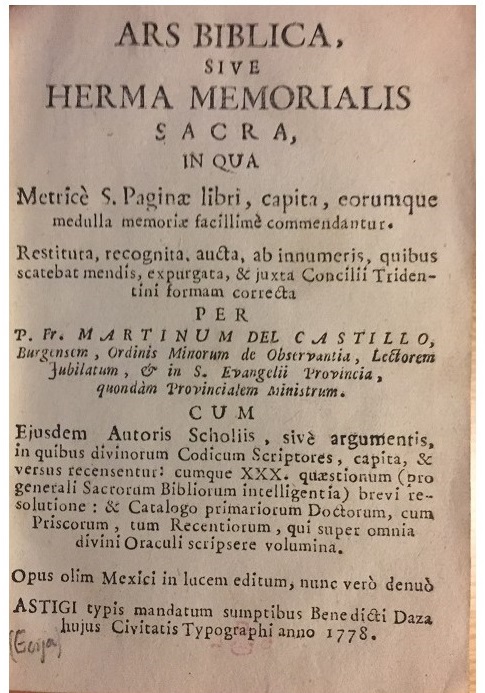 This pocket-sized book, recently acquired, enables the reader (presumably a preacher like the author) to memorise the chapters of the Latin Vulgate Bible using one word (or its abbreviation) to summarise each chapter.

Ch 1 is summarised by “Christum ad dexteram in coelestibus constituens”, which is part of verse 20 “quam operatus est in Christo, suscitans illum a mortuis, et constituens ad dexteram suam in cælestibus” [Which he wrought in Christ, when he raised him from the dead, and set him at his own right hand in the heavenly places].
This is boiled down to “Constituens”.

Ch 2 is summarised by “Estis sanctorum cives”, which is part of verse 19” Ergo jam non estis hospites, et advenæ: sed estis cives sanctorum, et domestici Dei” [Now therefore ye are no more strangers and foreigners, but fellow citizens with the saints, and of the household of God].
This is boiled down to “Cives”.

Ch 3 is summarised by “genua mea patrem flecto” which is part of verse 14 “Hujus rei gratia flecto genua mea ad Patrem Domini nostri Jesu Christi” [For this cause I bow my knees unto the Father of our Lord Jesus Christ]
This is boiled down to “Flecto”.

Ch 4 is summarised by “dona hominibus Dedit” which is part of verse 8 “Propter quod dicit: Ascendens in altum, captivam duxit captivitatem: dedit dona hominibus” [Wherefore he saith, When he ascended up on high, he led captivity captive and gave gifts unto men]
This is boiled down to “Dedit”.

Ch 5 is summarised by “ecclesiae Christus est caput” which is part of verse 23 “quoniam vir caput est mulieris, sicut Christus caput est Ecclesiæ” [For the husband is the head of the wife, even as Christ is the head of the church: and he is the saviour of the body]
This is boiled down to “Est caput”.

Ch 6 is summarised by “tenebrarum rectores harum” which is part of verse 12 “quoniam non est nobis colluctatio adversus carnem et sanguinem, sed adversus principes, et potestates, adversus mundi rectores tenebrarum harum, contra spiritualia nequitiæ, in cælestibus” [For we wrestle not against flesh and blood, but against principalities, against powers, against the rulers of the darkness of this world, against spiritual wickedness in high places]
This is boiled down to “Harum”.

Put them together and they make an “easily” (he says “most easily”, facillime) memorised hexameter line: “constituens cives flecto dedit est caput harum”.

At least that’s the theory. 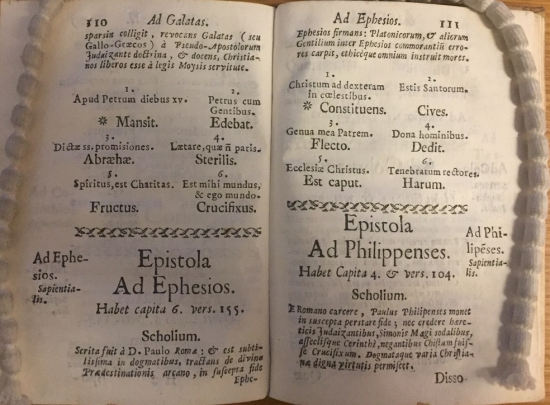 Fr Martín gives a chronological survey of earlier publications: Bonaventura in 1270, Petrus Rosenbeimensis [von Rosenheim] in 1450, Matthias Martinius, and “In our century” Leander a S Martino in 1628, et al.

“Alas! No-one cites the first inventor, Alexander de Villadei (of our Order OFM)”, author ca 1240 of some leonine verses, beginning “Sex, prohibet, peccant, Abel, Enoch, et arca fit, intrant.” According to Fr Martín, he was copied word for word by Leander a S Martino, who suppressed Alexander’s name and passed the work off as his own. Our old General Catalogue of Printed Books identifies this rotter: “LEANDER, de Sancto Martino [i.e. John Jones]”.

“Alas how many today wish to becloud the names of their predecessors! I freely admit my debt to others: Render under Caesar, etc.”

He has cleaned up the text of Alexander, bringing it into line with the Tridentine Vulgate of Pope Clement VIII (1592).

This is the second edition, the first having been printed in Mexico in 1675.
This sort of memory verse survives almost into our own day: the more elderly among you might remember the Kings and Queens of England in doggerel:

Fr Martín’s book takes us back to a time when the Bible was a vital concern, and when education was synonymous with a knowledge of Latin.