The case of the two Simon Kaufmanns 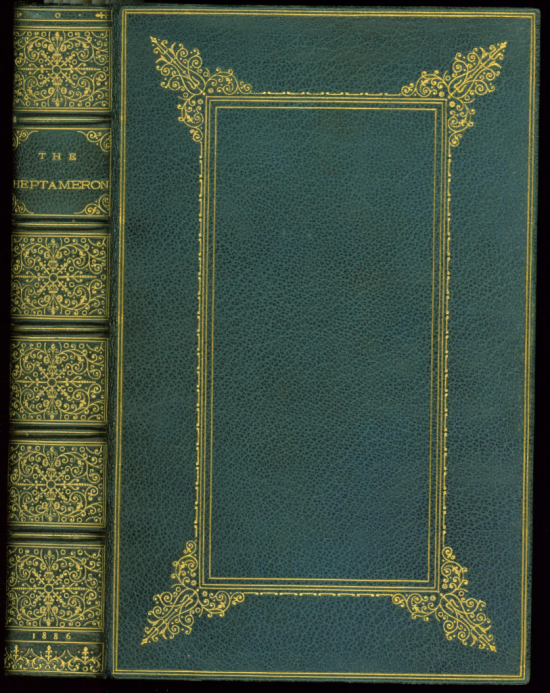 Bookbinders, like artists, sometimes signed their work. This usually (but not always) makes life easier for the researcher. The newly acquired and stunning binding pictured above is signed ‘S[imon] Kaufmann’, a name recorded in the standard reference work, Packer’s Bookbinders of Victorian London.

If this represents a typical piece of work from Kaufmann, he was an extremely skilled craftsman. Maybe Kaufmann was of the same opinion because, unusually, he twice added his signature to the binding, once on the upper turn-in and once on the verso of the upper flyleaf!. 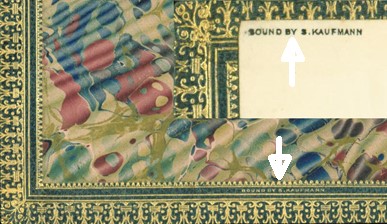 The two signatures, one in gold and one in black on Kaufmann’s Heptameron binding

The accepted narrative is that Kaufmann, a Soho bookbinder, found later success as a dealer in fancy goods. What, therefore, is the problem?

The Victorian censuses reveal that there were two Simon Kaufmanns living in London during the last half of the 19th century, both working with leather. Both came from Germany. One was probably from Koblenz and the other from Ortenberg. Even their wives had similar names; Eva and Eveline. At the risk of sounding like a Sherlock Holmes mystery, who was the bookbinding Kaufmann?

The spelling of names was not yet standardised in official documents at the time. The same person could be referred to as ‘Kaufman’ ‘Kauffman’ and ‘Kaufmann’ so this does not help us distinguish between our two craftsmen. (The blog will use the form ‘Kaufmann’.) Whatever the spelling, the name is more common in Germany than England, and means ‘merchant’ or ‘trader’. Some Kaufmanns were Jewish and it has been noted that Victorian London attracted German-Jewish antique dealers, toy manufacturers, and fancy goods merchants.

Packer recorded that ‘his’ Kaufmann worked with French bookbinder Lucien Broca in a workshop at 60 Frith St (1876-77). The British Library has a binding signed Broca and Kaufmann. Kaufmann then worked on his own behalf nearby at 42 Dean Street (1878-1882). From 1883 to 1889, Kaufmann’s premises was at 50 Frith Street. In 1890 bookbinder Harry Wood took over the shop. An article on Wood in  The British Book Maker revealed that he bought the business when the owner went abroad but I have not traced any travel documents that support this. Maybe this sale set Kaufmann up in financial terms. 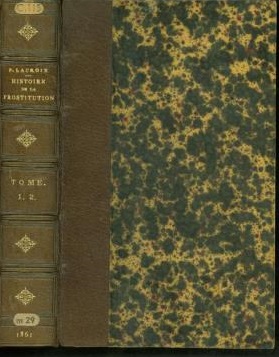 The 1891 census for Islington revealed a Simon Kaufmann (born in 1856, though sometimes listed as 1857) whose profession was ‘Plush Leather Fancy Goods Maker.’ This has led to the belief that Kaufmann turned from bookbinding to devote himself to the manufacture of decorated boxes, photograph frames, cigar and cigarette cases, watch and jewel cases and writing sets. Thanks to the flourishing of trade in Victorian London, the thriving middle classes had more disposable income and could afford to treat themselves to small luxury products. The firm ‘Simon Kaufmann’ prospered to such an extent that it exhibited at trade fairs in 1922 and 1929 and was still in business in 1942 in the Tottenham Court Road area. 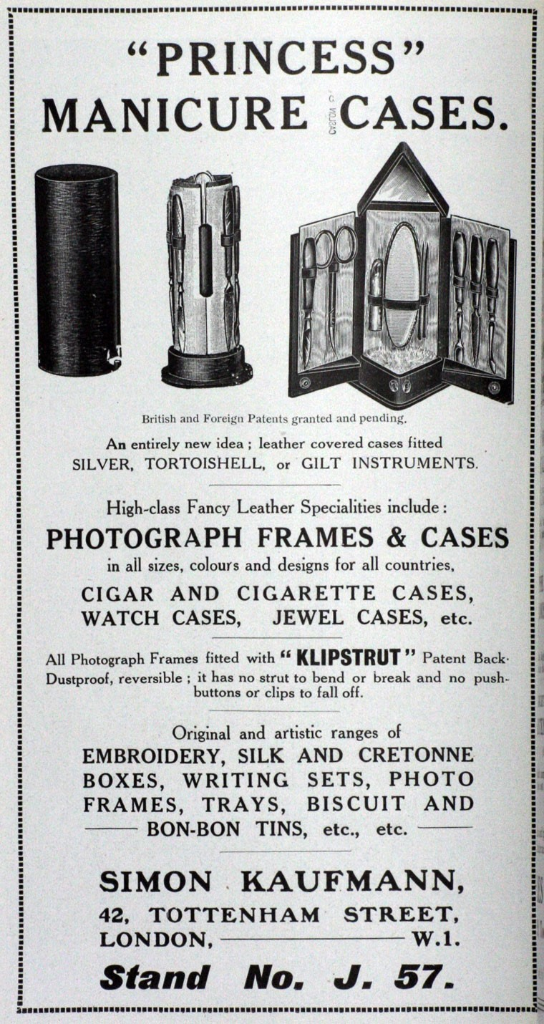 Tracing this Kaufmann back in time, the 1881 Clerkenwell census found him at the age of 24 staying with his German cousin Solomon and family at 19, St John Square. Solomon’s occupation was recorded as ‘F[ancy] Box Maker Employing 1 Man 2 Women 1 Boy’-. Simon was listed as ‘box maker’s cutter’, probably working for Solomon. In 1891, Simon, aged 35 and unmarried, was boarding at another house in Islington, but his occupation was the aforementioned ‘Plush Leather Fancy Goods Maker.’ He married someone in the same field, Eva Jane Allen, described in the census as ‘Fancy Dealer’s Shopwoman’. They set up house in Hornsey where they had two children. Kaufmann died in April 1897 leaving his wife well provided for with the sum of £4375 3s 7d. Advertisements in the Islington Gazette (2 Nov 1897 and 18 Sept 1905) requesting ‘experienced girls for covering photo frames etc’ shows that the firm was still in business and hiring staff after Simon’s death. The 1911 census describes Mrs Kaufmann as ‘Owner of Fancy Goods Manufactory’.

The binding acquired by the Library must date from between 1886 (the date of publication of the text) and 1889 when the workshop was sold. This was at a time when Kaufmann was supposedly engaged making boxes. Did Simon have two jobs? It seems unlikely. Bookbinding was a recognised trade that required many years training. Hours were long. Making boxes and establishing a fancy goods business would also have been a full time job.

The 1871 census for the City of London lists a Simon Kaufmann, lodger, born in Ortenberg, Germany in 1845 (though listed elsewhere as 1843 and 1846) who was a bookbinder. In 1881, he was described as a ‘Bookbinder Finisher’ (the craftsman who applied gold tooling and other decoration to a binding). In 1884 Simon married Eveline Selim (b. 1860) and in 1891 he was living with her in ‘Glemosa’ a house in Herne Hill Road, Lambeth, with four children, a nurse, a housemaid and a cook (the latter from Germany).

What was his profession in 1891? The entry reads not ‘binder’ nor ‘finisher’ but ‘Commissioning Agent’ (i.e. a salesman who derives his income from commission). This does not sound like a well-paid job but the fact that the household kept three servants would imply that there was certainly money. Kaufmann died in Camberwell in 1893. Details of a will and probate have proved elusive but his family were well provided for. According to the 1901 and 1911 censuses his widow Eveline was ‘living on her own means’ in Hampstead with servants and a lodger, stockbroker Henri Davids (from Belgium). Two of Kaufmann’s sons were employed as stock-jobbers (perhaps sponsored by Mr Davids).

It is pleasing to note that both Simon Kaufmanns did well. Despite their early deaths (the Kaufmann from Ortenberg at 50  and the other at 43 they secured the future of their families.

It seems likely that Kaufmann (b. 1856) learnt about the manufacture of small decorative objects through working for his cousin Solomon, and subsequently founded his own fancy goods business. The Kaufmann from Ortenberg was a trained bookbinder, sold his workshop in 1890 and became an ‘agent’ until his death in 1893. He was surely the maker of the bookbinding illustrated above but the nature of his subsequent occupation remains a mystery.

UK Census search online via Find My Past

Blog post by Laurence Worm on Broca and Kaufmann.