The life and career of one of the greatest 19th-century Russian novelists sprang – quite literally – from small beginnings. Born on 9 November 1818 and baptized Ivan, the middle son of Sergei Turgenev, a cavalry officer, and his wife Varvara was notable as a child for his diminutive stature; only his unusually large head indicated that he would develop both physically and intellectually into one of the giants of his age. 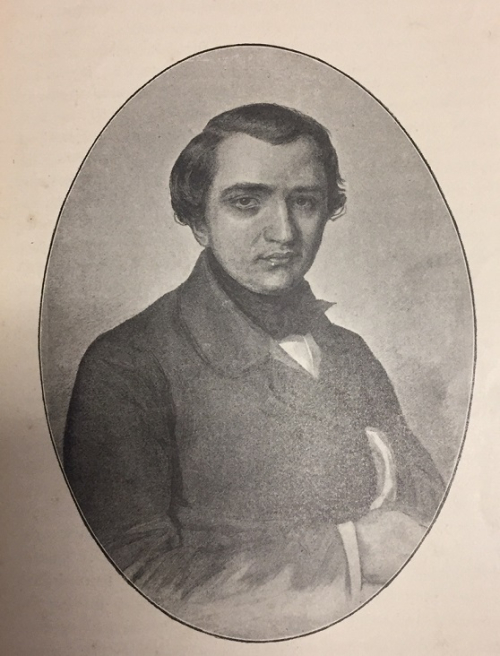 Despite a wealthy and privileged upbringing on the family estate at Spasskoe in the province of Orel’, the three young brothers did not enjoy an idyllic childhood. Varvara Petrovna adopted a harsh approach to their upbringing, employing strict tutors and inflicting severe beatings on her sons with her own hands. Turgenev later claimed that he had not one happy memory of his early years, and on one occasion packed a bundle and tried to run away, only to be persuaded to return by his German tutor. His father was well known as a womanizer, and Turgenev’s complex relationship with his mother, his parents’ unhappy marriage and his teenage infatuation with his father’s young mistress Zinaida, reflected in his novel First Love, permanently affected his own ability to form relationships and ensured that he never married. However, there were other sources of warmth and attention at Spasskoe: the kindness which Ivan received from the gamekeepers, who taught him the habits of wildfowl and how to handle a gun, and from his father’s valet Fyodor Lobanov, from whom he learnt to read and write Russian, inspired him with a love of nature, respect for the Russian peasant and hatred of serfdom. This contrasted with the influence of German idealism which he assimilated when, in 1827, the family moved to Moscow for the sake of the boys’ education. He had already begun to write verse which soon assumed the colours of the Russian ‘pseudo-sublime’ school, and while studying at the universities of Moscow, St. Petersburg and Berlin, travelling through Italy and Switzerland, and forging friendships with Nikolai Stankevich and Alexander Herzen in the 1830s and 1840s, he followed one false trail after another.

Steeped in the ancient classics, he aspired to a professorship and plunged into the philosophy of Hegel, had an affair (with his mother’s approval) with the wife of the poet Fyodor Tyutchev, rambled through the Alps in a state of Byronic melancholy, and only returned to Russia in 1841. Two years earlier the family mansion had burnt down, apparently following an attempt by a peasant to fumigate an ailing cow. At Spasskoe he started a relationship with a seamstress employed by his mother, resulting in the birth of a daughter, Pelagia, renamed Pauline when, aged ten, she was sent to France to be raised with the children of another of Turgenev’s loves, the singer Pauline Viardot-Garcia. 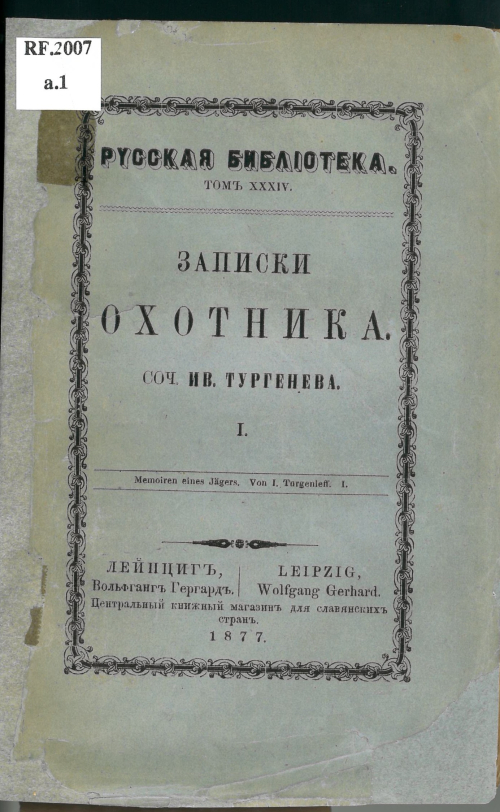 The return to the Russian countryside bore fruit of another kind in the form of A Sportsman’s Sketches (Moscow, 1852; C.114.n.15.), a collection of short stories which reflect Turgenev’s profound knowledge of the landscape and of the wildlife and people who inhabited it. Throughout his work there runs a deep dichotomy between the traditional ways of the remote Russian provinces and the impact of Western ideas brought back by those who had travelled abroad. Despite the urbane cosmopolitan manners which Turgenev – fluent in French, German and English – had acquired in Europe, his writings frequently display a marked ambivalence and sense of conflict, embodied most memorably in Fathers and Sons (Moscow, 1862; 12590.h.25) where it is paralleled by the bewildered incomprehension with which old Kirsanov greets the ideas of his revolutionary son and the latter’s friend Yevgeny Bazarov which gave the world the term ‘nihilism’. 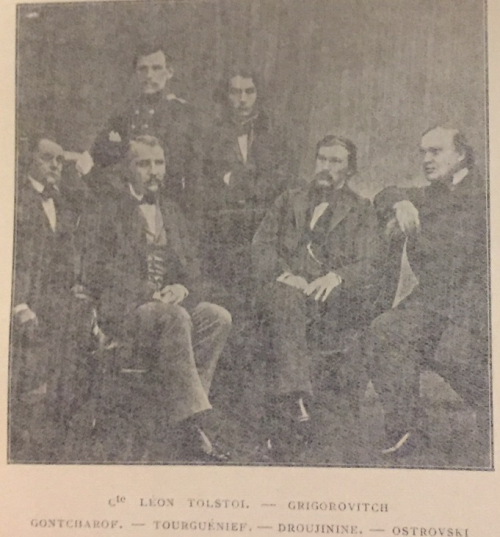 Turgenev had touched on this conflict in two earlier novels, Home of the Gentry (Moscow, 1859; 12591.dd.31.) and On the Eve (1862), both of which portray the intrusion of Western modernism into communities bound by the habits and conventions of rural life and morality and raise political issues which aroused profound disquiet in the stiflingly conservative atmosphere of Nicholas I’s empire. His friendship with the anarchist Mikhail Bakunin and ‘metaphysical entanglement’ with the latter’s sister Tatiana played their part in the development of characters such as the young Bulgarian revolutionary Insarov in On the Eve, and it is difficult to overestimate the alarm which Turgenev’s writings excited in government circles. He was not merely a consummate stylist and chronicler of quaint peasant ways and the beauties of the countryside; ‘le doux géant’, as his friend Edmond de Goncourt nicknamed him, was no hectoring advocate of revolt but influenced his readers by far more subtle means. His exquisite portrayal of character makes his revolutionary figures far more persuasive and convincing than any amount of tub-thumping oratory, and in the 1860s, the decade which saw the assassination of Alexander II, the ‘Tsar-Liberator’ who freed the serfs, Turgenev was regarded with growing nervousness. A friend of Flaubert, Zola and George Sand, widely translated into English and other Western languages, and the recipient of an honorary doctorate from the University of Oxford, he moved between two worlds with an ease which made him suspect as a dangerous political influence back in Russia. 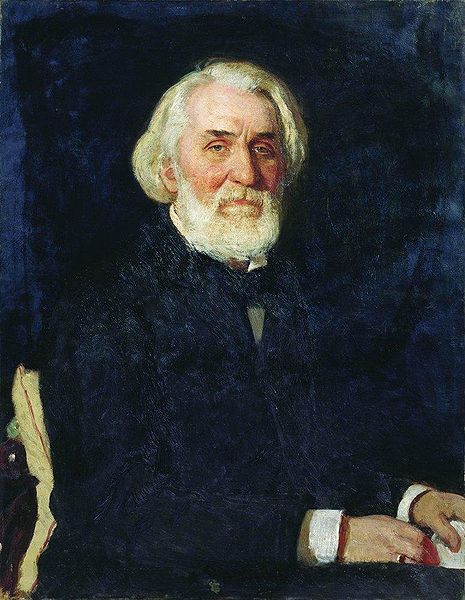 Portrait of Turgenev by Ilya Repin, 1879 (Image from Wikimedia Commons)

The circumstances of his death aptly illustrate this; like Heinrich Heine, he spent the last months of his life, in 1883, in an agonizing ‘mattress tomb’ in Paris, immobilized by a spinal tumour, but gave directions that his body should be brought back to Russia for interment close to the grave of his friend, the critic Vissarion Belinsky. Ernest Renan was one of those who delivered an oration at a brief ceremony at the Gare de l’Est before the coffin began its long journey. Conversely, the Russian Ministry of the Interior clamped down on all unofficial information about the funeral on 9 October; workers’ organizations were forbidden to identify themselves on the wreaths, and a gathering at which Tolstoy was to have paid tribute to his friend (and rival) was cancelled by government decree. The contrast between ceremonies in East and West was a telling comment on the very different kinds of esteem in which Turgenev was held in the two worlds which he inhabited with equal aplomb.