The tragic early death of the German writer Georg Heym in a skating accident in 1912 silenced one of the most original and exciting voices in early 20th-century German letters. Heym wrote plays and short stories but is best known as a poet. His first collection of poems, Der ewige Tag (‘The Eternal Day’) appeared in 1911; his second, Umbra Vitae (‘Shadows of Life’) was published posthumously in the year of his death. 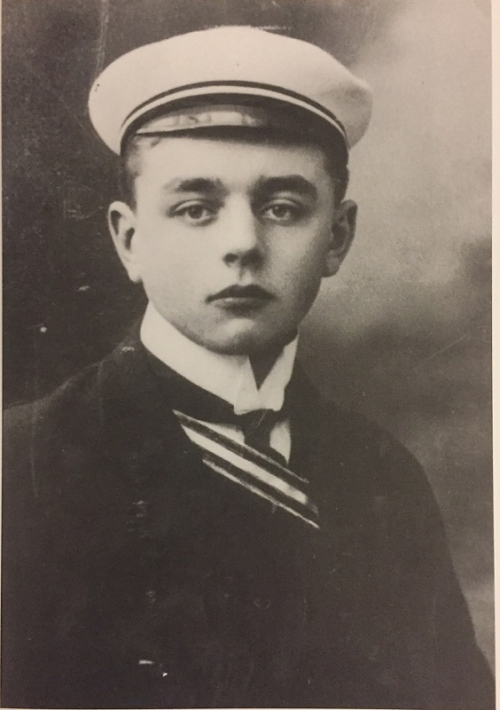 The poems use powerful and sometimes apocalyptic images. In ‘Der Krieg’, for example, war is personified as a demonic figure, unleashing first silent fear then forces of increasing violence and chaos. A number pf poems take the city as a theme, often conveying the sense of a city and its buildings as kind of living entity which can trap or threaten its inhabitants. Heym also examines the fears and doubts of human condition, particularly in ‘Die Irren’ (‘The Mad’), a cycle of poems which depict madness both from without and within.

But Heym can also be elegaic and romantic in poems such as ‘Träumerei in Hellblau’ (‘Reverie in Light Blue’) with its gentle evocation of dreams and a dissolving landscape, or ‘Deine Wimpern, die langen’ (‘Your lashes, long’), a tender love-poem haunted by shades of death.

Colour also plays an important role in the poems, particularly the colour red and contrasts between light and dark. Heym’s use of colour imagery often has an almost synaesthetic feel, with phrases such as ‘darkness rustles’, ‘seven-coloured torment’, or ‘autumn light / on the shore of the blue day’. He found inspiration in the paintings of artists such as van Gogh and Goya, and in his diary he recorded his own desire to be a visual artist and his frustration at his inability to give shape to his ‘imaginations’ in visual form. 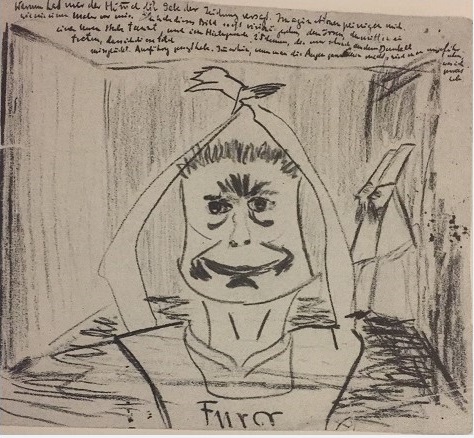 An attempt by Heym to draw one of his ‘imaginations’ of madness. In the text above he laments that ‘Heaven denied me a gift for drawing’ and explains that he has long had an image of a madman in his minds eye. Reproduced in Am Ufer des blauen Tags.

However, in 1924, a new edition of Umbra Vitae appeared, designed and illustrated by Ernst Ludwig Kirchner, which succeeded brilliantly in giving visual form to Heym’s work. 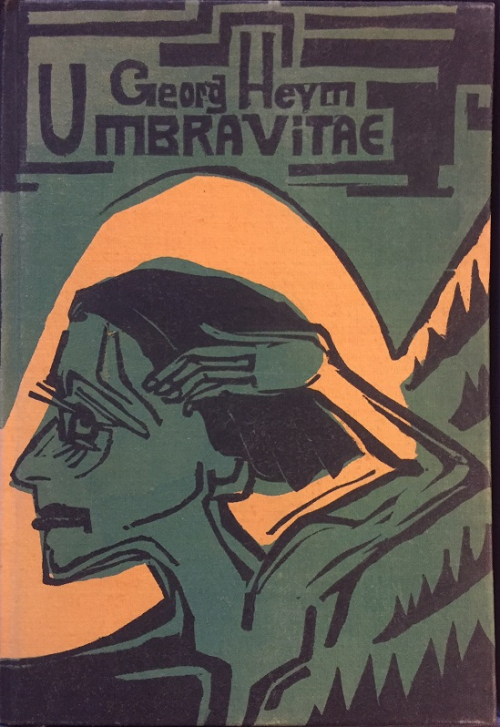 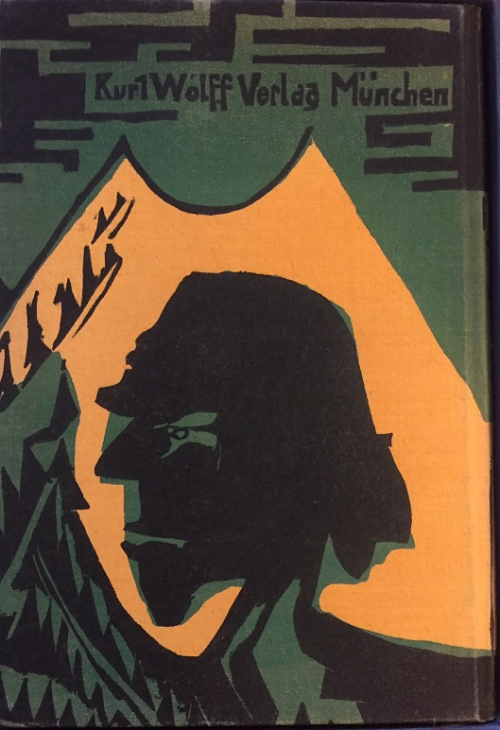 Heym and Kirchner never met, although after Heym’s death Kirchner and his fellow-artists of the group ‘Die Brücke’ became associated with the literary circle ‘Der Neue Club’ to which Heym had belonged. Kirchner acquired a copy of Umbra Vitae shortly after publication and clearly felt an affinity with Heym’s verse since he soon began drawing pictures to accompany the poems in the blank spaces on the pages. Knowing of this, a mutual acquaintance of Kirchner and the publisher Kurt Wolff, suggested in 1922 that Wolff should commission Kirchner to illustrate a new edition of Umbra Vitae. 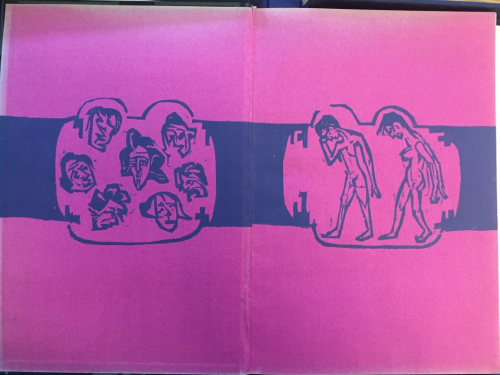 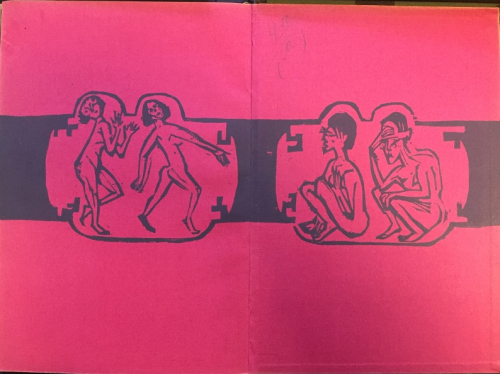 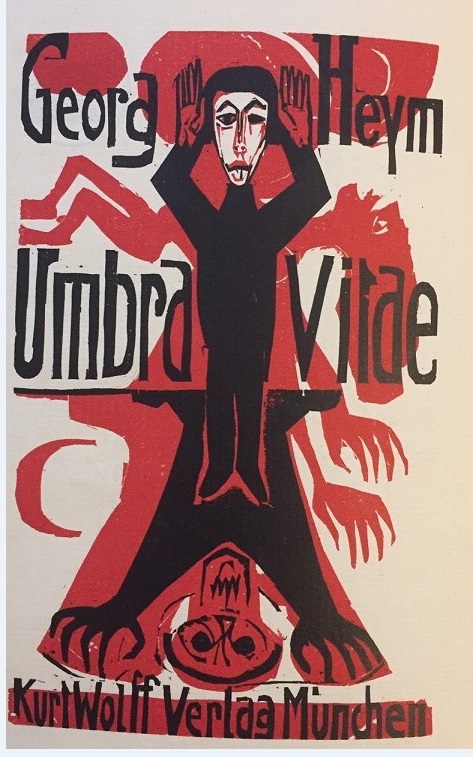 Kirchner not only illustrated the poems, but designed the whole book, with its vividly-coloured covers and endpapers, and black-and white illustrations, all using woodcuts, a popular form among the ‘Brücke’ artists. The illustrations range from small vignettes to an entire woodcut poem. 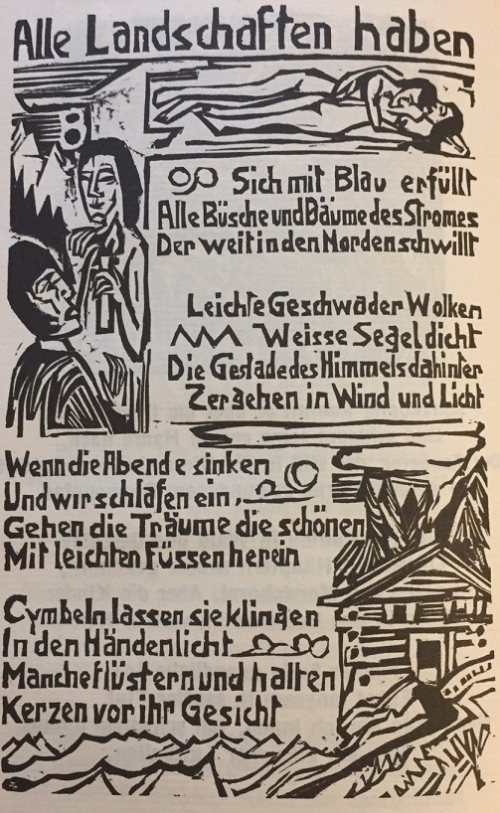 The poem ‘Träumerei in Hellblau’ (here without the title) illustrated by Kirchner as a full-page woodcut.

Kirchner described his woodcuts as being ‘like the accompanying melody to a song’. Some directly illustrate images or ideas from a poem, others reflect its mood. Some are almost abstract, others realistic. The poems and images complement each other in a way that is again almost synaesthetic, reflecting the concept of the ‘Gesamtkunstwerk’ where different artistic genres come together. 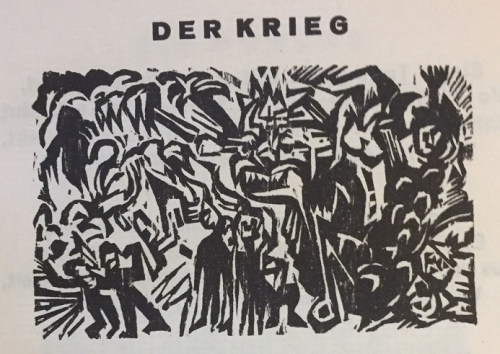 Like the poems themselves, the illustrations can sometimes appear deceptively simple, for example the vignette for ‘Der Krieg’ (above) where the war-demon’s face appears within what at first sight seems to be an explosion of fire. Some are full of detail, others sparer, such that  for ‘Die Städte’ (‘The Cities’, below) which also recalls Kirchner’s paintings of Berlin streets. 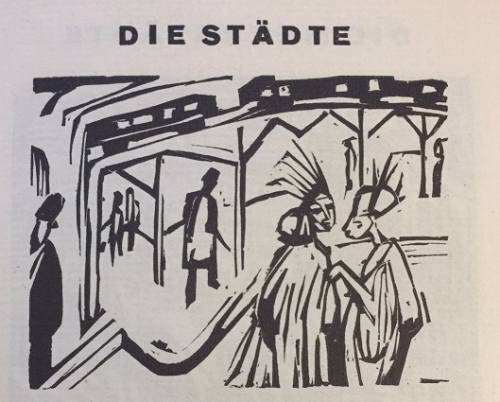 It is particularly interesting to note that the central figure in Kirchner’s illustration for ‘Die Irren’ (below) bears some similarity to Heym’s own attempts to draw his long-imagined picture of madness. Kirchner could not have known this, but it demonstrates the close affinity between his own and Heym’s imaginative worlds. 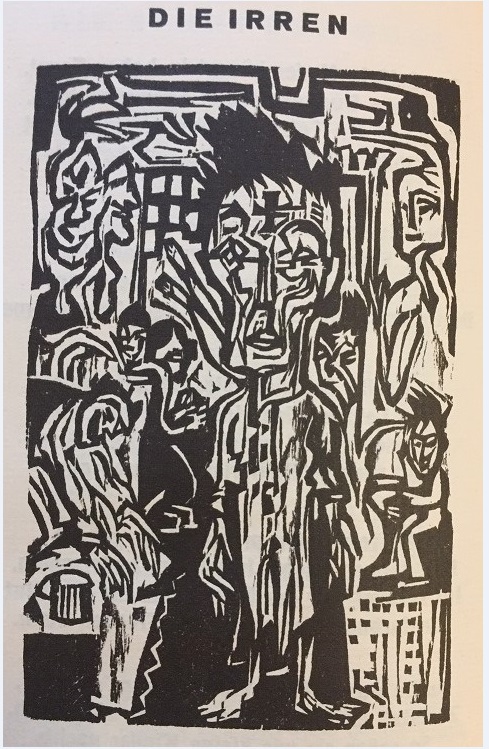 It is this affinity, as well as the beauty of Heym’s verse and Kirchner’s woodcuts, which makes this such a masterpiece of book art, and perhaps the finest articulation of German Expressionism in word and image.