Hundertwasser’s 90th and 35 Days In Sweden

The Austrian artist and architect Friedensreich Hundertwasser would have been 90 on Saturday. Functionality was not his priority and his thought might deserve to be re-thought unevenly, uninhabitably, uselessly. But, to quote Hundertwasser’s ‘Mouldiness Manifesto’, it’s hard to get away from the ‘straight-edged ruler’ of the page, to bend the blog format ‘with giant steps’ to approach ‘impractical, unusable and ultimately uninhabitable [literary] architecture.’ But let’s at least exercise the freedom to forego a straightforward biography of an artist whose work was anything but straightforward, and simply re-join him during the end of his 35 days in Sweden, an account published in 1967 following an exhibition in the Moderna Museet, Stockholm. 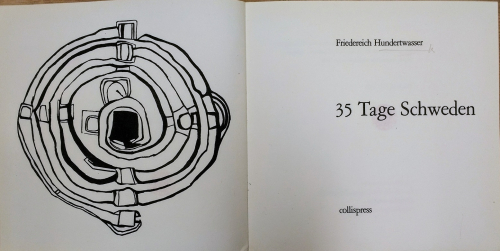 In the summer of 1956, Hundertwasser received a letter from his friend Hans Neuffer in Stockholm. Six days later the artist was there himself to begin a brief adventure. He moves from flat to flat, tries unsuccessfully to promote his artwork and the account culminates in two entries: ‘Als Tellerwäscher’ (‘As a dishwasher’) and ‘Als Matrose’ (‘As a sailor). Here are partial translations of these entries:

As a dishwasher
Then my friends said to me: why aren’t you working? Everyone works here. Us too. You should become a dishwasher. Actually, every Viennese student washes plates here. So I joined them. […]
I worked diligently in a restaurant on the Kungstgatan. But I soon noticed that the other dishwashers didn’t work too hard. They were up to their ankles in shards of broken dishes. Out of displeasure or maybe pleasure, they let nearly every third plate crash to the floor when they washed up, especially if there was a plate that seemed particularly dirty. Rarely, a dangerous supervisor would venture over the mountain of shards to check whether the glasses and plates were washed and dried well. She wasn’t too concerned about the mass of shards on the floor. Sweden is a rich country, I thought to myself. Only cleanliness is important. There were white plates like snow fallen from the sky and scrunching underfoot. […] 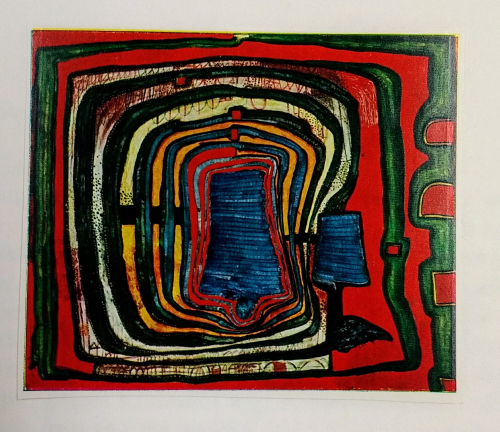 As a sailor
So a few days went by. Suddenly Hans Neuffer came to my apartment all agitated to say that I had to go with him to Casablanca straightaway. As a deckhand on an Estonian ship under a Liberian flag. […]
I put down the coffee spoons and went along. To the Estonian Seamen’s Company. They didn’t want me though. But then they didn’t want to engage Neuffer alone. I was supposedly too old to be a deckhand. But then they phoned around and sent me to the doctor for examination to see whether I was fit for service. […] But they didn’t look at me and just asked for a urine sample. I had suffered from jaundice before and I feared that they would notice this in the analysis. I managed, in an unobserved moment, to chuck away half the sample and replace it with tap water. […] I was deemed fit and received my train ticket to Söderhamn.
The ship, the “SS Bauta” was close to the station. […] To my surprise, all the seamen had to go and pick wild berries every day. After a week, we went out to sea. I was at the helm twice a day for two hours, 4am till 6am and 4pm till 6pm. I had never done it before and completely messed up the ship on the first day. Then I got better at it. I also had to wash dishes and turn the oven on at 6am to make coffee for the first mate. Everything had the addition of “FACKING”. For example, I once spoke to someone who was limping. He said: “I went to get the FACKING butter, I fell on the FACKING stairs, I got this FACKING wound. Here is no FACKING doctor on this FACKING ship.”
The stokers argued over whether the war was over yet. Some said yes, but the majority thought that Goebbels had taken over and the war had continued. I didn’t dare contradict them. […]
On board the SS Bauta, I painted the watercolours 274, 275, 276, and 277 , and wrote the novel “BLAU BLUM” together with Hans Neuffer. […]
I was witness to the fact that I really am a very good sailor.

Avoiding a progressive line through the Hundertwasser biography to home in on a scene and a limited edition of that scene might do justice to the anti-linear freedom of an ‘automatist’, 90 years old today.