Russian cats 3: Muri in Search of his Kingdom

Although this cat was created by a Russian author who made him live in Yugoslavia in the early 1990s, this is a universal cat, because what can be a more cat-like name than Muri? Muri, invented by Ilia Boiashov is quintessence of cathood. The title of this book, Put’ Muri, can be translated as ‘Muri’s Way’ or ‘Muri’s Path’. Published in 2007, this is not the first book by Ilia Boiashov, but it is the one that brought the author the National Best-seller award. 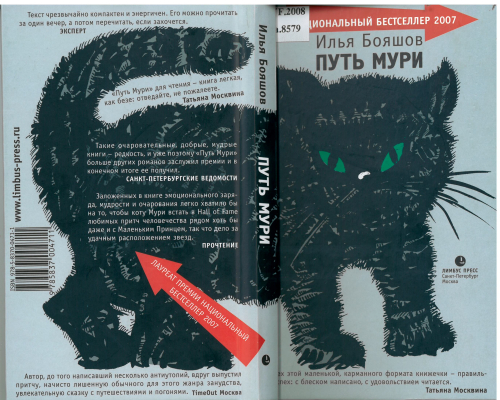 The publisher marketed Boiashov as “Russian Kusturica”, probably because of the Yugoslav and cats connections. I would also say that this book will probably appeal to Paulo Coelho’s fans.

The story is a classic example of a philosophical and allegorical travel novel. We first meet Muri as a young imprudent cat from a Bosnian village who thinks that he is a master of the world (or at least the house, the garden, the barn and the storehouses) and the universe revolves around him. As his peaceful life comes to an abrupt end due to the war, the cat starts its quest for “his armchair and warm blanket”. Muri travels around Europe in search for his owners, or rather his servants in his own view, a family of father, mother and two children. On his way Muri, as prescribed by the genre, meets other characters – people, sprites, and animals – who are either on the move too or static. Unlike other travel stories this one is not interested in the characters as such, but in their destiny.

Apart from Muri and the characters that he meets, there are quite a few other stories illustrating different scenarios of personal paths in life. A sheikh makes several attempts to circle around the planet in a small plane; a whale travels around oceans; a Serbian driver is on his way to his dream home. All the stories are framed by an academic argument between two rival groups of scholars divided by their attitude to the philosophical concept of movement and their views whether animals are capable of conscious decisions. While the philosophers debate the question of Super-significance of the True Being, Muri circles around Europe and through Austria, Belarus, Russia and Finland finally reaching Goteborg, where his universe has been preserved by his Bosnian family who are staying in a barrack for refugees in the outskirts of the city. Neither Muri, nor his servants-masters are surprised to see each other. Muri takes his milk as given and goes to sleep planning to explore this new kingdom tomorrow.