The ‘Artist Maks’: The Ukrainian Disciple of Aubrey Beardsley

2018 has marked 120 years since the death of Aubrey Beardsley (1872–1898), the British master of Art Nouveau who has been repeatedly named an emblem of Victorian Decadence. Born into the age of quick photomechanical reproduction of images, he exploited this new technology to circulate his black-and-white designs worldwide. ‘No artist of our time’, noted the poet Arthur Symons in his tribute to Beardsley, ‘has reached a more universal, or a more contested fame; […] none has had so wide an influence on contemporary art’. 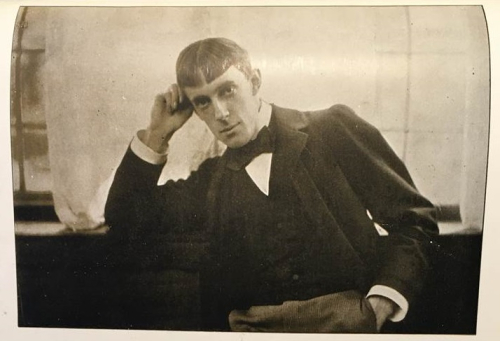 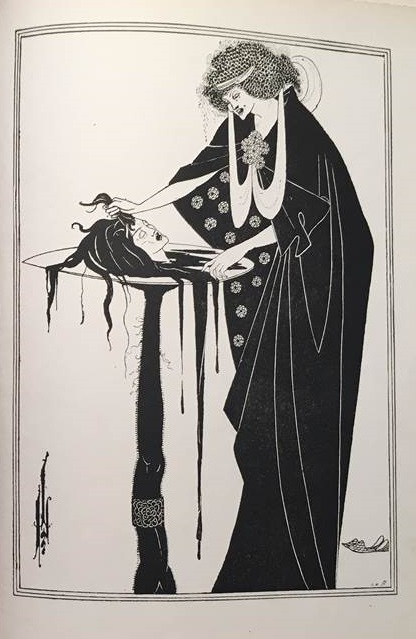 Among the histories of Beardsley’s extraordinary international influence, his Ukrainian reception is among the most surprising ones. Thus, a single look at the works by Vsevolod Maksymovych (1894–1914) justifies the artist’s nickname of the ‘Ukrainian Beardsley’. Like Beardsley, Maksymovych was a prodigy. At 19, he produced most of his paintings that shared the period’s preoccupations with exoticism, mysticism, and sexuality. At 20, he committed suicide. His short life did nevertheless overlap with key cultural events of the early 20th century, including the fading of the Art Nouveau style, the birth of the Futurist movement, and the earliest avant-garde experiments in film. 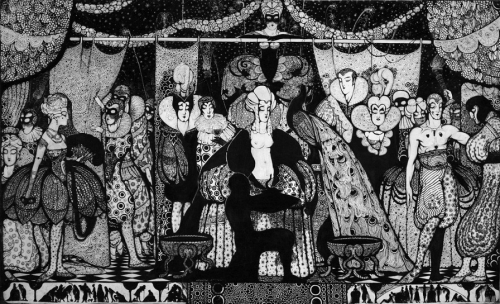 Maksymovych was born in the city of Poltava in 1894. In the West, it was the year of the Beardsley Boom, when the volumes of the Decadent almanac The Yellow Book and Oscar Wilde’s drama Salome disseminated Beardsley’s notorious designs. After Beardsley’s premature death in 1898, the international circulation of his images persisted through fashionable periodicals. In Eastern Europe, his drawings were popularised by the St Petersburg aesthetic journal Mir iskusstva (1899-1904; P.P.1931.pmb.) and the Moscow review Vesy  (1904-1909; Mic.F.430). The Kyiv magazine V mirie iskusstv (1907-1910) dedicated an illustrated essay to Beardsley in 1907. 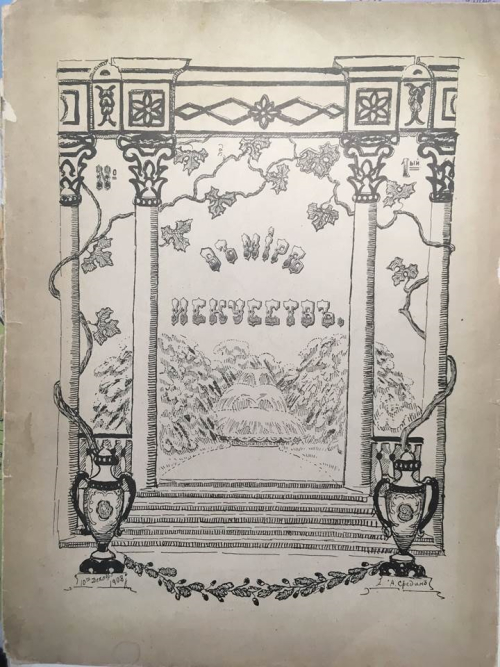 At the beginning of the 20th century, a Ukrainian art lover such as Maksymovych would have inhabited a world permeated by Beardsley’s visual language and imagery. While it was common for the artists of the 1910s to adopt Beardsley’s stylised line and black-blot technique, Maksymovych stood out among the imitators. The painter transferred the intricate graphic lace of Beardsley’s black-and-white illustrations to his colossal – up to four-metre-wide – oil canvases. As the art historian John Bowlt observes, ‘if certain esthetic ideas did bloom late on Ukrainian soil, they tended to assume luxuriant, hybrid proportions’. 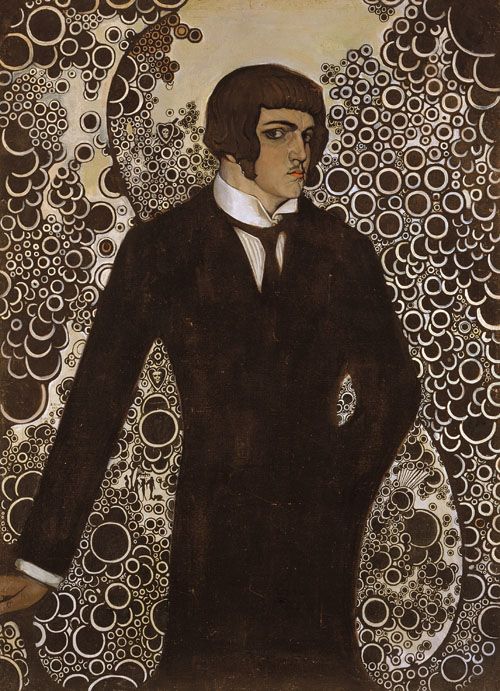 Maksymovych’s life-size Self-Portrait is an example of such luxuriant blooming. The picture centres on the immaculately-dressed figure of the artist who, like Beardsley, posed as a dandy. Even more fascinating than Maksymovych’s self-depiction is the backdrop which incorporates familiar details from Beardsley’s Salome designs: the dramatic peacock patterns formed of curvilinear tails and foaming crescents. Those Beardsleyesque backgrounds dominated the responses of contemporaries to Maksymovych’s work. In the words of the Futurist writer Boris Lavrenev: ‘His canvases consisted of circlets and rings, tangled and intertwined, […] which resembled a pile of soаp bubbles’.

Lavrenev and Maksymovych met in Moscow in 1913 during the filming of The Drama in Cabaret No 13. This film is considered the first cinematic experiment of the global Avant-Garde. Directed by a pioneer of abstract art, Mikhail Larionov, it featured Futurist celebrities such as Vladimir Mayakovsky and David Burliuk. Although the film itself has been lost, surviving frames allow the identification of the male lead. It was, undoubtedly, Maksymovych, or the ‘artist Maks’ as he was called within the Futurist milieu. The ‘artist Maks’ lived through the clash of the languorous Art Nouveau aesthetics with the revolutionary Avant-Garde. Despite Maksymovych’s prominent position in the Futurist networks, the style of his work was sadly out of date by the standards of 1914. When his one-man Moscow exhibition of that year failed, the ‘Ukrainian Beardsley’ overdosed on drugs. 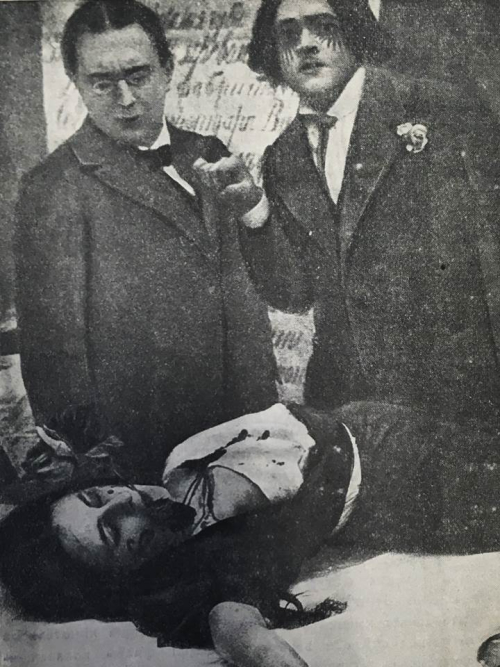 A scene from The Drama in  Cabaret No 13, from M. L. Polianovskii, Maiakovskii-kinoakter

After the painter’s suicide, his works did not stand much chance of entering official Moscow art collections. Maksymovych’s mother and the art collector Fedir Ernst eventually succeeded in bringing his works back to Ukraine. Ideologically incompatible with official Soviet culture, the paintings reemerged from the cellar of the National Art Museum of Ukraine only at the turn of the 21st century. Today, as we celebrate the international legacy of Aubrey Beardsley, it is time to look closely at his Ukrainian disciple and examine the transformations of art works, styles, and myths when they travel across national borders.