I wonder whether you were suitably confused by the first post about Russian cats that didn’t make it to the British Library exhibition Cats on the Page. Now, I want to tell you a story about more Russian cats on the page. No, I’ll start again: they are not all quite Russian, but they live in Russia. And they do not live quite on the page or in libraries, because the heroes of this blog live in museums. To be precise, in one particularly important and beautiful museum – the Hermitage in St Petersburg. In 2009, curators who work in the Hermitage, published a book about the cats in their collection – cats on canvas, cats on lithographs and prints, in other words, all drawn, painted, photographed and sculptured cats. 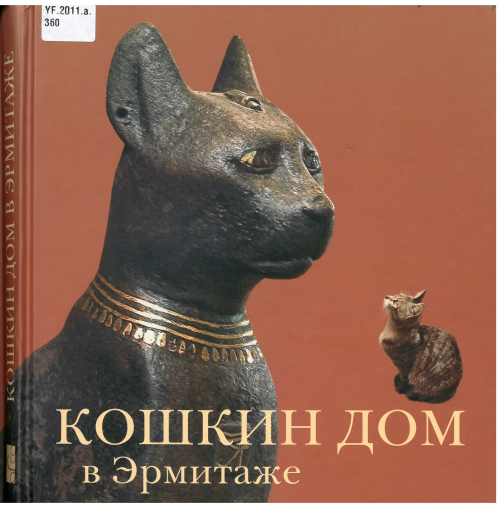 The book tells how cats were sacred in Ancient Egypt and how cats’ lives were worth more than human lives. Readers would also learn how Ancient Greeks smuggled cats in amphorae and how having a cat as a pet was a sign of wealth in the antiquity. In mediaeval and early modern Europe cats were believed to possess demonic power and attributes. But later cats became just naughty. For example, they were portrayed numerously by a Flemish painter Frans Snyders to animate his game still lifes.

Detail (above) from Frans Snyders, Cook at a Kitchen Table with Dead Game, 1634-37 (below), reproduced in Koshkin dom v Ermitazhe Cats in China are believed to be descended from the Sacred Tiger. While the Tiger was busy safeguarding good men by protecting them from evil, he found it very difficult to maintain his responsibility to protect fields from rodents. Once, accidently touched by a mouse, escaping from him, he sneezed a cat out of his nostril and thus – delegated his responsibilities. 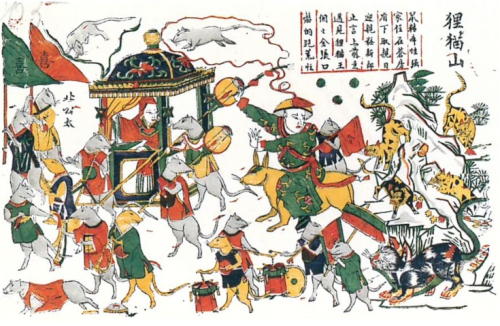 Cute Japanese okimono of waving cats bring luck. Legend has it that one poor woman said goodbye to her cat because she could not feed it any more. The loyal cat, instead, gave her a good advice to make a clay figurine of him waving his paw. And so she did! And her figurine sold well. And so were more figurines. So we can conclude: always listen to your cat and do what he says. 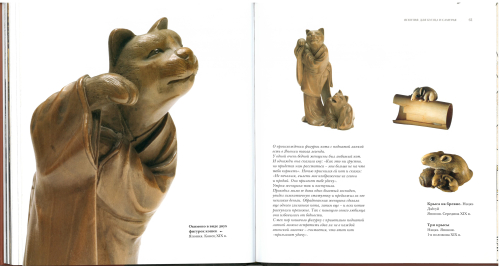 Okimono and netsuke from the Hermitage collections. Reproduced in Koshkin dom v Ermitazhe.

The first cats came to the Old Rus’ and Muscovy in the 13th century and for the next 200 years remained an expensive curiosity. Since then cats in Russian folklore have occupied their place next to babies’ cots mewing lullabies, as ‘pioneers’ first entering newly built houses and showing the best and the worst corners, and in the kitchen forecasting the weather: curled-up cats mean frost the next day, while stretching cats predict a nice day ahead and pleasant visitors. And of course, like in many other countries, they are in confrontation with mice. One of the most popular stories presented on cheap prints sold for home decoration in the 19th century, shows a funeral procession where mice are taking their cat neighbour to the cemetery. We are still not quite sure whether the cat is dead or alive. We can treat this story as we feel fair and depending where our sympathies lie: the cat is trying to give the bothersome mice a lesson, pretending to be dead and then suddenly scaring them away (or worse, if you like!), or being naughty and greedy he indeed had fed on mice and died of surfeit (awful!). 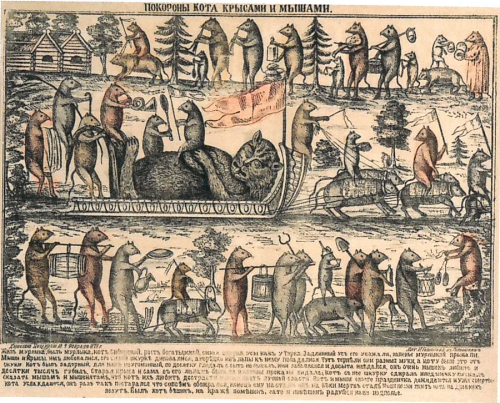 And, of course, I don’t need to remind you about the pussy-cat who visited the Queen.  Some lucky Russian cats not only visited Tsars and Tsarinas, but were courtiers. The book tells us about the rules how palace cats were catered for. Catherine the Great imposed people’s social structure on cats, who were divided into two uneven categories: general palace cats (business class) and room cats (first class). 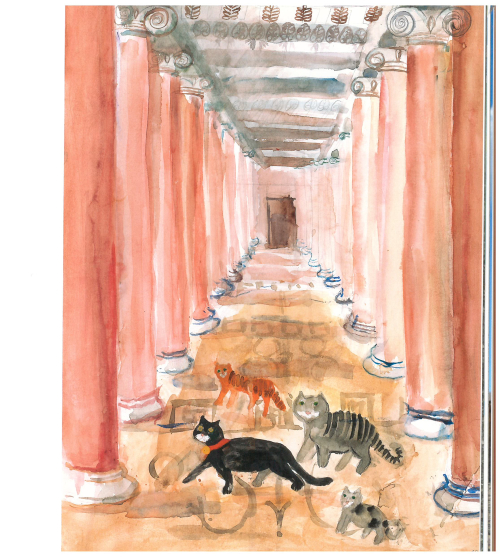 Dasha Chernova made this picture when she was 8 years old. Reproduced in Koshkin dom v Ermitazhe. 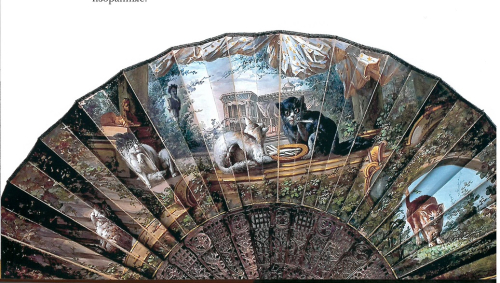 These well-fed cats eating asparagus in a palace garden came to Russia from France on Princess’s Dagmar of Denmark’s fan and settled down in the Winter Palace among other things that belonged to Maria Feodorovna, Empress of Russia.

The last chapter of this book is devoted to the cats who live in the Hermitage now. If you are to travel to St Petersburg and visit the Hermitage, say hello to Ksiusha, Dasha, Wonderful Prince, Vas’ka, Timur, Tishka, Katya, Lana, Vlada, Lera, Matilda, Liutik and Van Dyck.

The free exhibition Cats on the Page continues until 17 March 2019, with a series of accompanying events for all ages and interests.