While I was looking for a nice seasonal picture (preferably, with lots of snow to compensate for another grey Christmas) to tweet @BL_European, I found this postcard from our collection of Russian Imperial postcards. 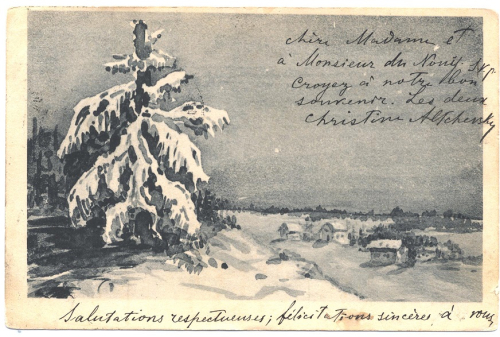 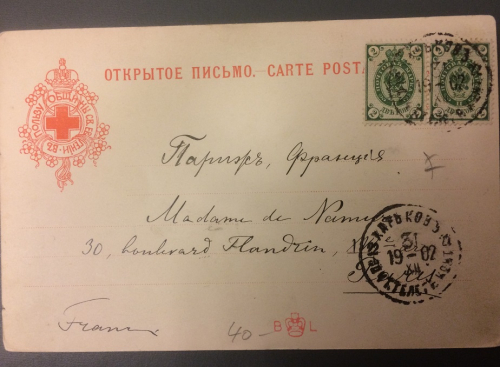 Just a standard greeting card in French. The postcard was sent from Kharkiv to Paris on 31 December 1902 and signed by ‘Christine Altchevsky’. The name looked vaguely familiar. Having looked at it more carefully, I realised that the postcard must have been written by either mother or daughter Alchevska on behalf of both of them since they bore the same first name – Khrystyna – and were distinguished women in their generations.

Khrystyna Danylivna Alchevska (1841-1920) was an educator, teacher and a prominent activist for national education in Ukraine and the Russian Empire, vice-president of the International League of Education in Paris. 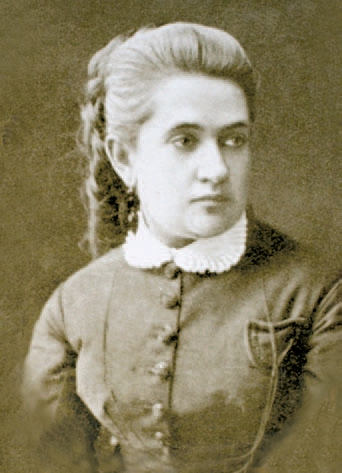 She created and promoted a training methodology, implemented in many schools, established the Kharkiv Women’s Sunday School, the first free girls’ school in Ukraine, which remained in existence for 50 years, and published articles on adult education. Khrystyna Alchevska wrote and taught in Russian and Ukrainian, promoting her native language and culture. 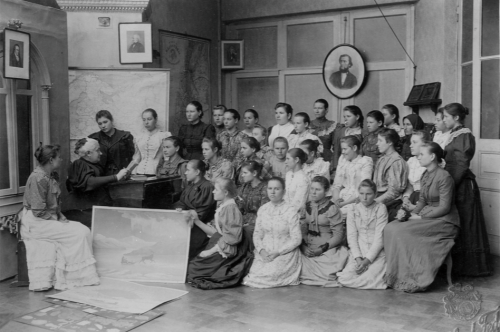 She also initiated, edited and, as we would call it now, ‘project managed’ a fundamental three-volume annotated bibliography Chto chitat’ narodu? (‘What should people read?’ 1888-1906), to which she contributed 1150 articles and annotations. It is difficult to call this work simply a bibliography, as it is really an interesting combination of bibliographic, encyclopaedic and pedagogical knowledge. The book is divided into subject sections, such as History, Science, Fiction, Religious and Moral literature, Biographies, Geography, etc., and each book is fully described, annotated with certain critiques, and supplied with methodological instructions for teachers, including questions and suggestions for lesson planning. There are also several indexes and tables, including those that recommend texts according to levels of difficulty and suitability for adult and young learners. It is interesting to note that the core contributors to the work were fellow women teachers and educators. 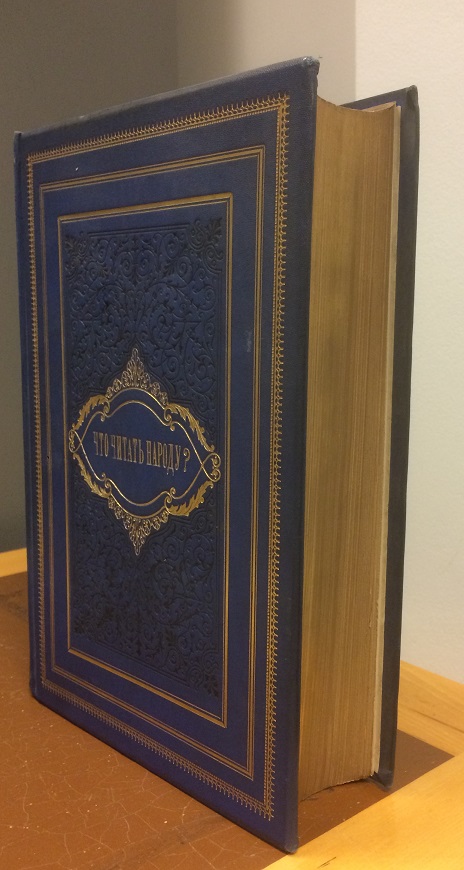 Khrystyna Alchevska left very interesting memoirs about her life and the people whom she had met, and corresponded with Leo Tolstoy, Fedor Dostoyevsky and Ivan Turgenev.

A talented and creative woman herself, Khrystyna Danylivna brought up five bright and creative children, among whom were an entrepreneur, a composer, a singer, and a theatre critic. The youngest in the family was Khrystyna (or Khrystia) (1882-1931), who became known as a distinguished Ukrainian poet, translator and educator. 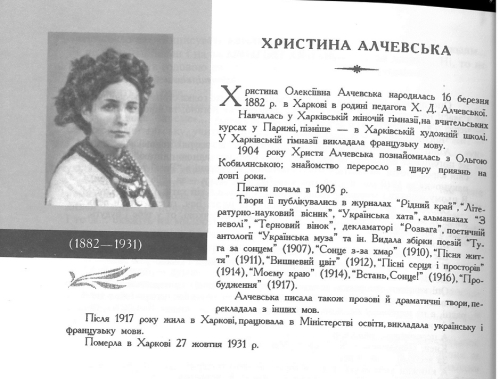 1902 was the year when Khrystia’s poems were first published in Ukrainian magazines and almanacs. In 1907, her first book of poems appeared in Moscow and was noted by the maitre of Ukrainian literature of that time Ivan Franko. Later, Khrystyna translated Franko into Russian and French, but he was not the only author that she was interested in. She translated Pushkin and Pierre-Jean de Béranger, Voltaire and Alexey K. Tolstoy, Victor Hugo and Nikolai Ogarev into Ukrainian, and Taras Shevchenko and Pavlo Tychyna into French. In the 1920s she was friendly with Henri Barbusse, under whose influence Krystyna created two verse dramas. 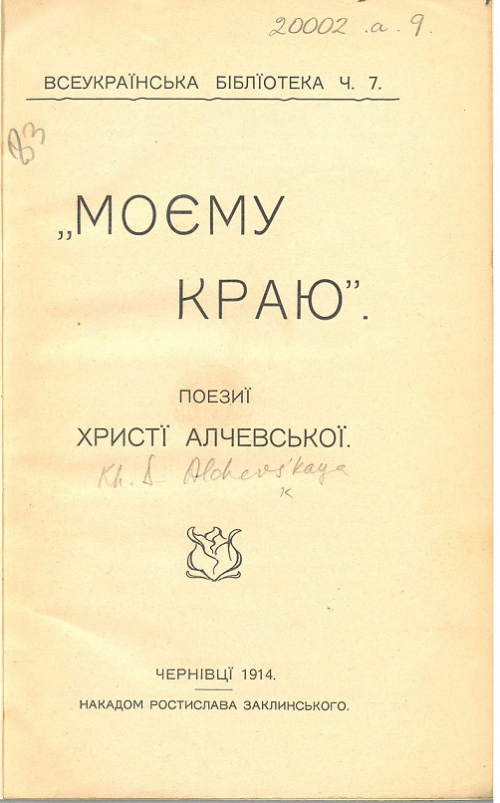 Unfortunately, I could not find who Madame and Monsieur de Namur (?) of 30, Boulevard Flandrin were and how both Khystynas could have known them. But if someone knows the link between the Alchevskas and this family in Paris, please let us know. But I still like this story with an open ending that old Christmas cards can tell.

The Book for Adults (written by the teachers at the Kharkow Sunday school, under the direction of Mme. Christine Altchevsky), and the surroundings which inspired it ... Translated from the French by Mme. Auguste Serraillier. (Paris, 1900) 4193.h.62

A fairly comprehensive bibliography relating to works by and about the Alchevsky family can be found here: http://mtlib.org.ua/ukazateli/34-semya-alchevskikh.html