Kater Murr at 200: ‘the cleverest, best and wittiest creature of his kind ever beheld’

Visitors to the British Library’s current exhibition Cats on the Page may have caught sight of a curious creature who first saw the light in Prussia 200 years ago – Kater Murr, the famous tomcat created by E. T. A. Hoffmann and based on his own much-loved pet, a handsome striped tabby. While British audiences may be more familiar with works by Hoffmann which provided the inspiration for the ballets The Nutcracker and Coppélia and for Offenbach’s opera Les Contes d’Hoffmann, Murr himself is no mean performer – a worthy companion for his master, the gifted but reclusive musician Johannes Kreisler, who inspired Robert Schumann’s Kreisleriana. 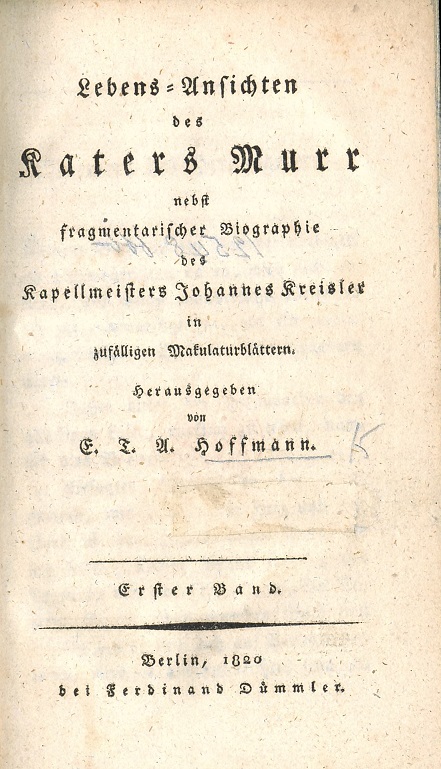 Lebens-Ansichten des Katers Murr nebst fragmentarischer Biographie des Kapellmeisters Johannes Kreisler in zufälligen Makulaturblättern was first published in two volumes in 1819-21 (a third volume was promised but never completed). The author claims that Murr taught himself to read by perusing books and papers in the study of his original owner, Master Abraham, and went on to learn calligraphy from the manual compiled by Hilmar Curas. This enabled him to compose such masterpieces as a political treatise entitled Mousetraps and their Influence on the Character and Achievement of the Feline Race, the tragedy Cawdallor, King of Rats, and the ‘philosophical and didactic novel of sentiment’ Thought and Intuition, or, Cat and Dog. By a publisher’s error Murr’s ‘life and opinions’ (not for nothing was Hoffmann influenced by Laurence Sterne) were interleaved with a biography of Kreisler himself and bound into a single volume.

The resulting narrative is an inspired parody of the Bildungsroman, charting Murr’s development from a kitten rescued from drowning by the kind-hearted Master Abraham to a cat of letters and high culture – at least in his own eyes. In the tradition of Wilhelm Meister and his like, Murr encounters a wide variety of characters and falls into some highly dubious company. He joins a cats’ Burschenschaft, a fraternity of the kind so popular among German students in the era of ‘Turnvater’ Jahn (whom Hoffmann defended in court), engaging not only in gymnastics but in rowdier pursuits such as drinking, duelling and caterwauling songs. 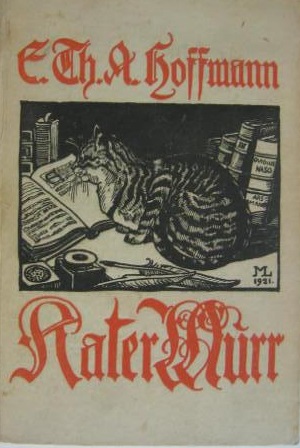 Cover of Lebens-Ansichten des Katers Murr in an edition with illustrations by Maximilian Liebenwein (Zurich, 1923) X.958/995. Currently on display in the Cats on the Page exhibition

Naturally, his sentimental education is also chronicled; he has an emotional encounter with his long-lost mother, (though he absent-mindedly devours the fish-head which he had intended to offer her), and enjoys an ‘instructive’ friendship with Ponto, a poodle (irresistibly evoking thoughts of Mephistopheles’s disguise as a black poodle in Goethe’s Faust). He then embarks on a ‘personality-forming’ love affair with the charming Miesmies which comes to an abrupt end when she falls for the blandishments of a war veteran, a swaggering striped tabby cat sporting the Order of the Burnt Bacon for valour in ridding a larder of mice. Murr’s friend, the black cat Muzius, opens his eyes to the betrayal, but Murr comes off worst in the duel which ensues, and escapes with bleeding ears and minus a considerable quantity of fur. 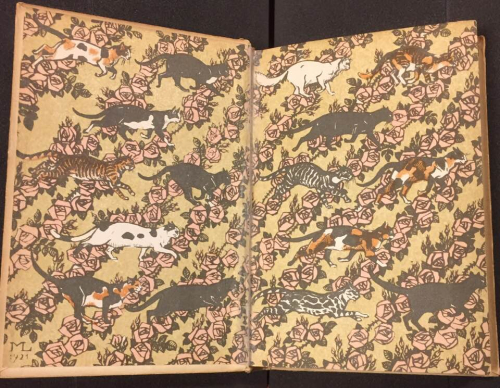 In a lively and graceful fashion Hoffmann makes fun of the conventions of polite society and its members’ cultural pretensions; Murr scans the pages of Ovid’s Ars Amatoria for ploys to capture the heart of Miesmies or free himself from his obsession, and invites her to sing. This succeeds: ‘Ah! Am I still upon this earth?’ he cried ‘Am I still sitting on the roof? […] Am I still Murr the cat, and not the man in the moon?’ To his request for a song, Miesmies responds with the aria ‘Di tanti palpiti’ from Rossini’s Tancredi. Murr, a veritable homme des lettres très renommé (as he terms himself), is conversant with all the notable authors of the day, quoting freely from Schiller’s Don Carlos and Die Jungfrau von Orleans, Adalbert von Chamisso’s Peter Schlemihl, and, of course, Ludwig Tieck – not only his translations of Shakespeare but also his play Der gestiefelte Kater (Puss in Boots). This story runs parallel to the unhappy tale of Kreisler’s failure to achieve social success and romantic happiness in a petty principality, recounted on pages torn from the printed biography which Murr uses as blotting-paper and which are inadvertently included in the book.

Not only social but also literary conventions fall victim to Hoffmann’s pen; Murr’s directions about ‘how to become a great cat’ satirize the contemporary trivialization of the ideals of the Bildungsroman, and his Biedermeier-like complacency and liking for comfort contrast sharply with the uncompromising attitude of the tormented genius Kreisler. In a postscript, the ‘editor’ notes that ‘that clever, well-educated, philosophical, poetical tomcat Murr was snatched away by bitter Death […] after a short but severe illness’ without completing his memoirs: ‘A genius maturing early can never prosper long: either he declines, in anticlimax, to become a mediocrity without character or intellect […] or he does not live to a great age’. 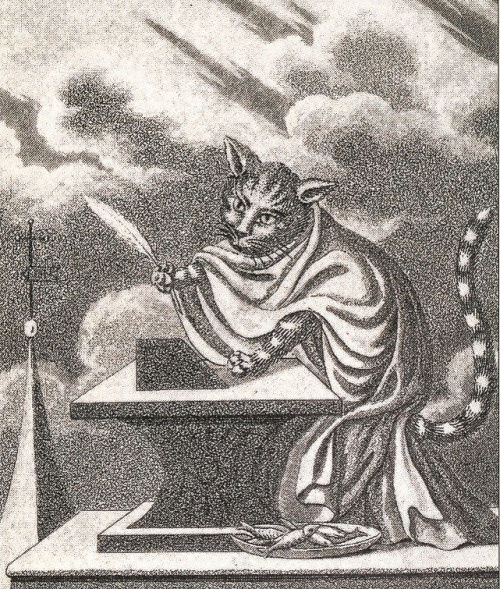 Picture of Kater Murr by Christian Friedrich Schiele from the first edition of the  novel, reproduced on the cover of Anthea Bell’s translation, The Life and Opinions of the Tomcat Murr (London. 1999) H.2001/426.

Whatever the reader may feel about the self-congratulatory comments of the egregious Murr, he can hardly be accused of mediocrity. A near kinsman of Tybalt, the cat of mediaeval beast fables, and Perrault’s White Cat and Puss in Boots, he would become the ancestor of a whole line of talking cats, many of whom feature in the exhibition – Gottfried Keller’s Spiegel das Kätzchen, Christa Wolf’s Max in Neue Lebensansichten eines Katers, and perhaps even Lewis Carroll’s Cheshire Cat. Hoffmann, the ‘editor’, assures the reader that he has met Murr personally and found him ‘a man of mild and amiable manners’, and by her accomplished translation Anthea Bell has enabled English-speaking readers to make the acquaintance of ‘the drollest creature in the world, a true Pulcinella’.

Posted by Olga Kerziouk at 9:58 AM