Katharina Luther and a Letter to a Laureate

Checking and correcting catalogue records can lead down some interesting pathways. Recently I was looking at records for books by the German theologian Johann Friedrich Mayer (1650-1712) and was keen to untangle, among others, the records for three editions of a Latin dissertation on the life of Katharina Luther, first published in Hamburg in 1698. A note, which had become attached to all three records in the online catalogue, mentioned ‘a MS letter from F. Martin to Robert Southey’. As well as wanting to make clear which edition really did include the letter, I also wondered what its contents were.

The letter turned out to be in the first of the three editions, and having sorted out the catalogue records, I settled down to see what ‘F. Martin’ – actually Frederick Martin – had to say. His letter, dated 21 March 1831, shows that he was sending the book as a gift to Southey. He begins by expressing his hope that Southey ‘may be a stranger to the charms for which “Maister Martin Luther” was content to risk the gibes of sir T. More’. (These ‘gibes’ were in fact vicious attacks by Thomas More on Luther’s marriage: he described it, among other things, as ‘whoredom’.) 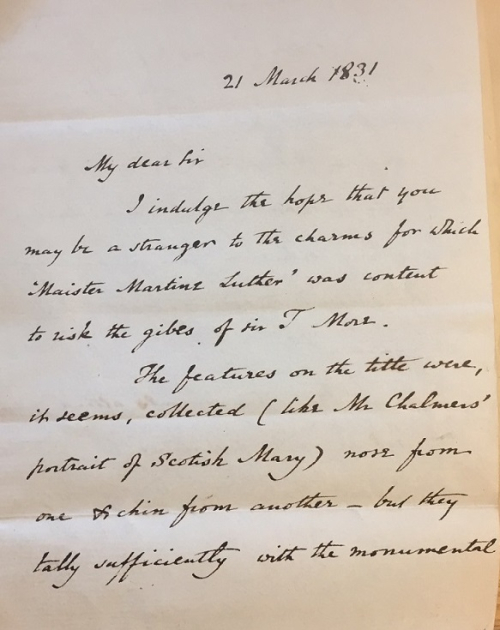 The opening of Martin’s letter

Martin casts doubt on the accuracy of Katharina’s portrait on the title page, speculating that ‘the features … were … collected … nose from one, chin from another’, although he acknowledges that ‘they tally sufficiently with the monumental effigy [an engraving of Katharina’s tomb] further on.’ In fact the title-page portrait is a reproduction – albeit a rather clumsy one – of a portrait of Katharina by Lucas Cranach. 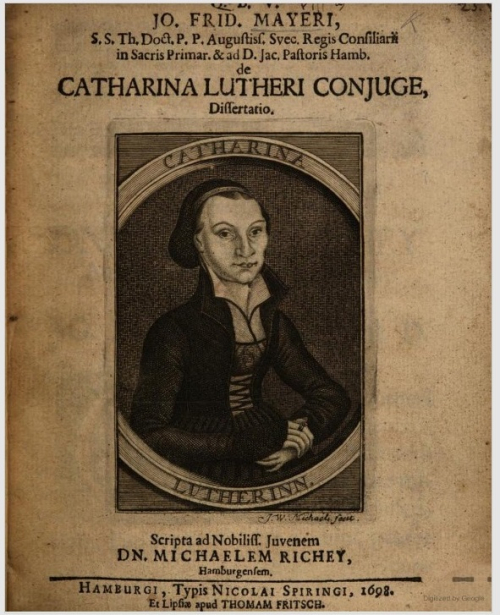 The letter continues in a slightly whimsical vein, with Martin conflating book and subject as he offers the former to Southey:

As she was no Wife of Bath and will cause no great expense of bookroom, it is her prayer hereafter on your shelves to be protected from the anti-Protestant worm which, during a long seclusion from air and light, has dared nibble a corner of her garment.

Despite this suggestion of damage, the book is in very good condition with no obvious wormholes.

Martin goes on to mention other volumes that he is planning to send to Southey. He explains that, since he cannot find ‘a convoy answering the two conditions of going near, yet not to, Keswick’, he intends to ‘commit them to the good offices of the Kendal guard.’  After offering his ‘best compliments to Mrs Southey’, he then signs off, but adds a brief postscript to the effect that he is not ‘in the least likely to want Warton or his two companions’ – presumably books which Southey had offered to him.

I was curious as to who Frederick Martin was and how he knew Southey. Neither an online search nor a brief survey of recent biographies and studies of the poet turned up anyone of that name other than a literary critic who was born in 1830 and is therefore not our man. The context of sending books made me briefly wonder if Martin was a bookseller, but the copy of Mayer’s book was clearly being offered as a gift, and it appears that the others are also to be sent as gifts or in exchange for other works rather than sold to Southey. There are no letters to or from any Frederick Martin in the Life and Correspondence of Robert Southey produced by Southey’s son Charles in 1849, and since there is no definitive modern edition of Southey’s complete correspondence – an online edition is in progress, but has only reached 1821 – there seemed little hope of finding other related letters without  far more research than I could spare the time for.

There was, however, a clue to Martin’s identity in an inscription on the verso of the book’s front endpaper: ‘FM Coll: SS TRIN. 1824’.

This implies that Frederick Martin was a student or fellow of Trinity College in Oxford, Cambridge or Dublin. I drew a blank with the alumni lists for Oxford and Dublin, but there was a Frederick Martin who entered Trinity College Cambridge in 1822 and received his MA in 1831. He went on to a career in the church and was for 16 years Rector of South Somercotes in Lincolnshire, the epithet given to him in the pre-1975 printed catalogue of the British (Museum) Library, which records three works by him. If this is the Frederick Martin in question, I still have no clue as to how he knew Southey and how close or lasting their acquaintance was. The letter implies some previous correspondence or meeting between the two, and the light-hearted tone and regards to Southey’s wife suggest a degree of personal acquaintance, although Martin addresses Southey as ‘My Dear Sir’ rather than the ‘Dear Southey’ that a close friend would probably use.

Whoever Martin was, Southey thought it worth preserving his letter, and did indeed find ‘bookroom’ for Mayer’s work and grant Katharina the protection of his shelves. The book is listed in the catalogue of his library, offered for sale after his death (p. 98, no. 1867), where it is described as a ‘presentation copy, calf, gilt leaves, from Fred. Martin, with a humorous note in his autograph’, and thus it survives in the British Library to this day.

Alumni cantabrigienses: a biographical list of all known students, graduates and holders of office at the University of Cambridge, from the earliest times to 1900, compiled by John Venn and J. A. Venn. (Cambridge, 1922-1954) RAR 378.42