Many researchers who have explored the extensive Spanish collections of the British Library will have consulted the Catalogue of the Manuscripts in the Spanish Language in the British Museum (London, 1875-1893; RAR 090.16 Eng). Compiled by the orientalist and bibliophile Pascual de Gayangos y Arce (1809-1897), the work can be seen not only as a scholarly catalogue, but also as exemplifying his role as a cultural bridge between Spain and the English-speaking world. 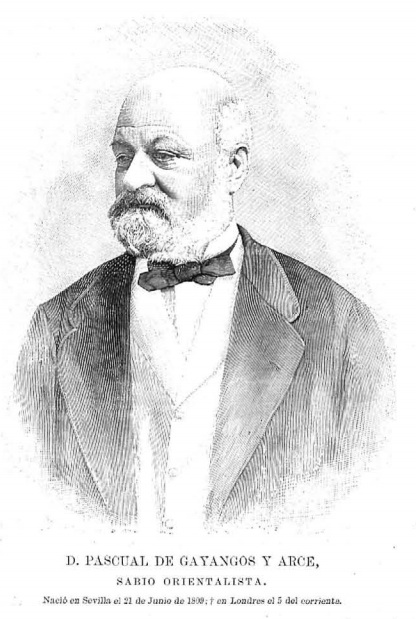 For some six decades, Gayangos was arguably the most respected Spanish scholar in both Britain and the United States. His first contact with the British Museum occurred during a research visit to London in 1835 when he learned of the acquisition of manuscripts from the library of Juan de Iriarte (1703-71), who had been the Spanish Royal Librarian. He even added to the Spanish collections the following year when he sold a series of original letters relating to the history of England and Spain to the Museum (now BL Egerton MS 616).

In 1837, Gayangos set up home in London in order to carry out research for his major work, The History of the Mohammedan Dynasties in Spain (London, 1840-1843; 14003.f.23), based on manuscripts held by the Museum. Soon, he became a familiar figure in the reading rooms. The American historian Jared Sparks commented to William H. Prescott in 1840 that among ‘a hundred readers and transcribers, of all nations and tongues … you see Gayangos eagerly poring over his Arabic manuscripts’. During this time he willingly aided a growing number of scholars; hunted in library, book trade and auction catalogues and in private collections for Spanish books and manuscripts; wrote on Spanish topics for books, journals and encyclopaedias; gained the friendship of Hispanophiles such as Richard Ford; and performed the role of ‘literary ambassador’ for Spain in London. It was in 1842 when, according to Gayangos himself, he began his catalogue of the Museum’s Spanish manuscripts as an aid to his own research. In 1843, however, he returned to Spain where he was appointed to the chair of Arabic at the University of Madrid, but this did not prevent him from strengthening his links with ‘dear old England’. 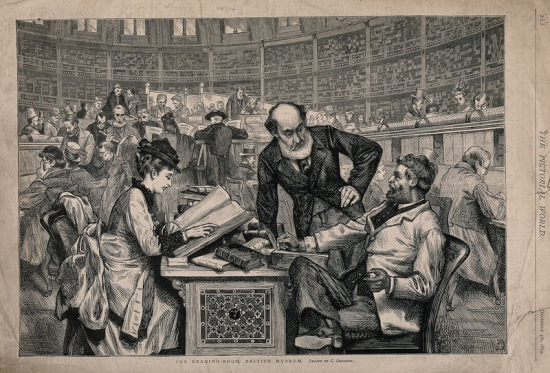 Annual visits to London began in 1855 and he continued to note systematically the Museum’s new acquisitions of Spanish materials. He also investigated its rare riches such as the Bauzá collection of maps and charts when, in the 1860s, he was commissioned by the Spanish Government to study documents relating to the historical rights of Spain to her colonies. Significantly too, he generously shared his discoveries with fellow scholars such as William Stirling-Maxwell, John Rutter Chorley, Edward Churton, Frederick W. Cosens and, later, Henry Spencer Ashbee and Norman Maccoll. The British Museum Trustees were therefore happy to entrust the Spanish manuscripts project to a scholar who, on Stirling-Maxwell’s recommendation, ‘has had some considerable share in furnishing materials for almost every good English book on any Spanish subject which has appeared during the last thirty years’. Gayangos made the formal proposal in 1867. He retired from the chair in Madrid in 1870. Title page of vol. IV of Gayangos’ Catalogue of the Manuscripts in the Spanish Language in the British Museum

Despite his age, Gayangos showed phenomenal vitality during the last three decades of his life and, while continuing to work on the Catalogue, he visited Simancas, Brussels and Vienna. He was also employed by the Public Record Office in the continuation of the Calendar… of State Papers relating to England and Spain. His career came to a sad end on 28 September 1897 when, crossing Southampton Row, probably en route to or from the Museum, a ‘badly driven horse’ knocked him to the ground, causing his death some days later. For those interested in ‘las cosas de España’, he left behind the Catalogue and the Calendar, just two of ‘his long series of impersonal, objective works’ that, in the words of James Fitzmaurice-Kelly, ‘but faintly mirrored’ his true stature. Today the two works, the Catalogue and the Calendar, remain essential reference tools and can be consulted on the open access shelves of the British Library.

Calendar of letters, despatches and state papers relating to the negotiations between England and Spain… vols. 3-7 (London, 1871-99) HLR 941.