‘Tom Puss, conjure up a trick!’

Our ‘Cats on the Page’ exhibition features several items on clever and cunning cats. It is probably fair to say that the most famous amongst them is Puss in Boots. He is represented in a charming pop-up book by Vojtěch Kubašta,  published in London in 1958 (W.E.d.692)

But did you know that the Dutch cherish an equally clever, cunning and cool cat? His name is Tom Poes, created by Marten Toonder (1912-2005) Toonder may never have guessed that the doodles of various animal figures he made one day out of sheer boredom would lead to 45 years of newspaper cartoons, cartoon strips, books, films, merchandise, illegal copies of his works, as well as to a statue of his little cat hero in the Rotterdam street where he was born. 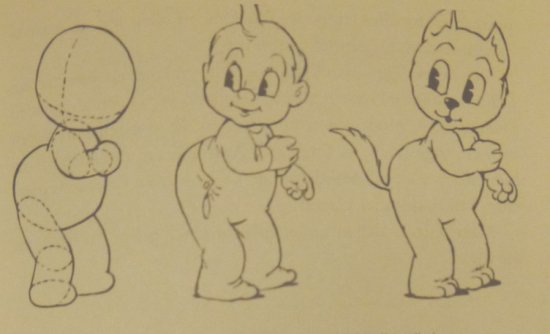 The doodles were filed away in a drawer where they lay forgotten, until a Dutch national newspaper, De Telegraaf, asked Toonder to write and illustrate a daily cartoon. Looking for inspiration he found the drawings and decided to give the little cat a try. His wife Phiny Dick, pen name of Afine Kornélie Dik, suggested the name ‘Tom Poes’ and it was she who wrote the first Tom Poes story, Het Geheim der Blauwe Aarde (‘The Secret of the Blue Earth’), which was published on 16 March 1941. However, she soon handed the whole enterprise over to Marten.

Very soon, during his third adventure (‘In the Magic Garden’, 1941) Tom Poes met the brown bear Olie B. Bommel, a ‘gentleman of standing’, for whom ‘money is of no importance’. Tom Poes and he become inseparable and Bommel became more popular than Tom Poes during their many adventures. 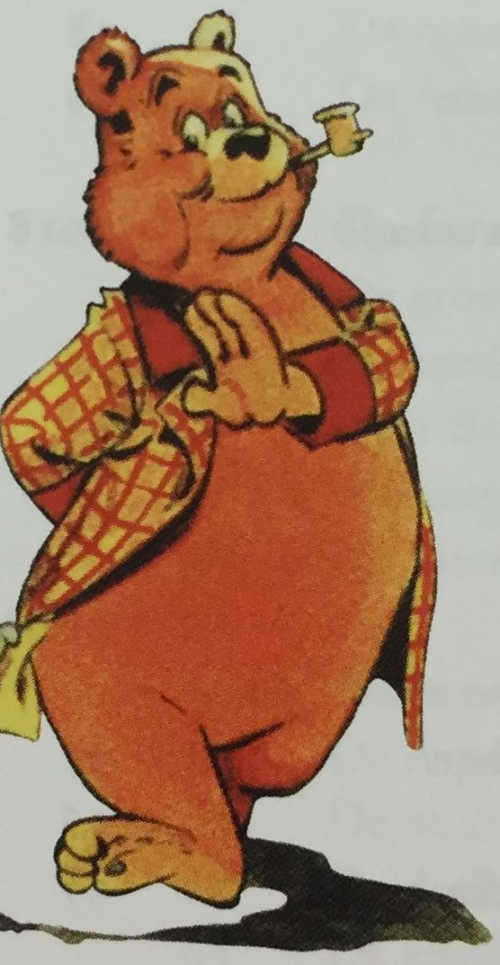 Olie B. Bommel, detail from the cover of a publisher’s flyer for Marten Toonder: Alle verhalen van Olivier B. Bommel and Tom Poes

Bas van der Schot compared the couple to Don Quixote and Sancho Panza in Was Tom Poes maar hier (‘If Only Tom Poes Were Here’), a homage to Marten Toonder, published in 2006, a year after his death. 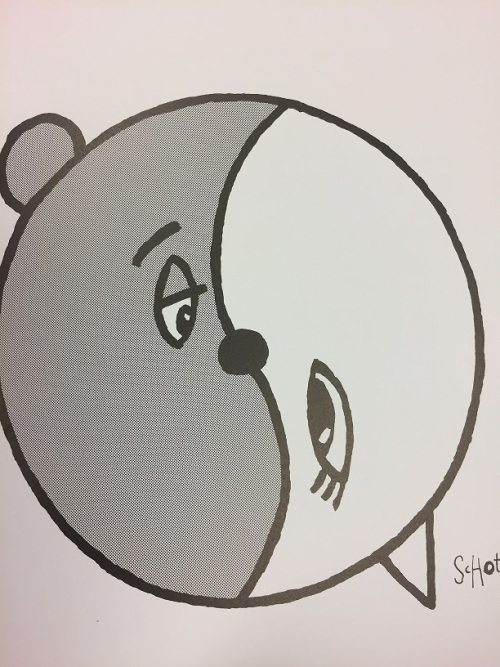 Olie B. Bommel may be fantastically wealthy, but he is not very clever, nor is he in touch with the ‘real world’. It is Tom Poes who has the brains, always keeps his cool, and gets them out of many a pickle. ‘Conjure a trick, Tom Poes!’ is another phrase that has entered the Dutch vernacular, which almost literally means the same as Baldrick’s ‘I have a cunning plan’. 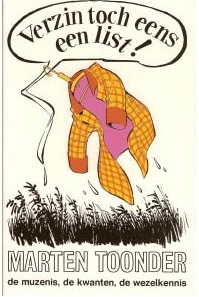 De Telegraaf insisted Marten Toonder used the format of the text cartoon by which the text is printed underneath the illustrations, rather than in speech balloons. This format had been invented by the Swiss teacher, author, artist and cartoonist Rodolphe Töpffer, who was famous in the Netherlands for his Histoire de Monsieur Cryptogame, which was actually the very first cartoon to feature in Dutch newspapers. In Calvinist Holland speech balloon strips were frowned upon well into the 20th Century, but text cartoons were just about acceptable. 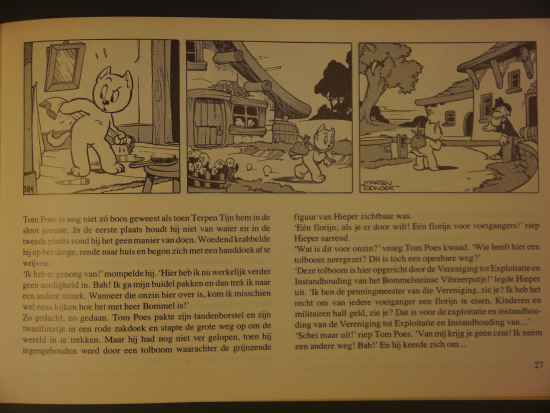 Toonder perfected Töpffer’s format by treating text and illustrations as equal, so the reader needed both to make sense of the story.

Right from the start Tom Poes was translated into various languages: Swedish and Czech were the first, published in 1941, soon followed by French, Spanish and some British titles. The Loch Ness Monster, published in Tom Puss Comics is one example. 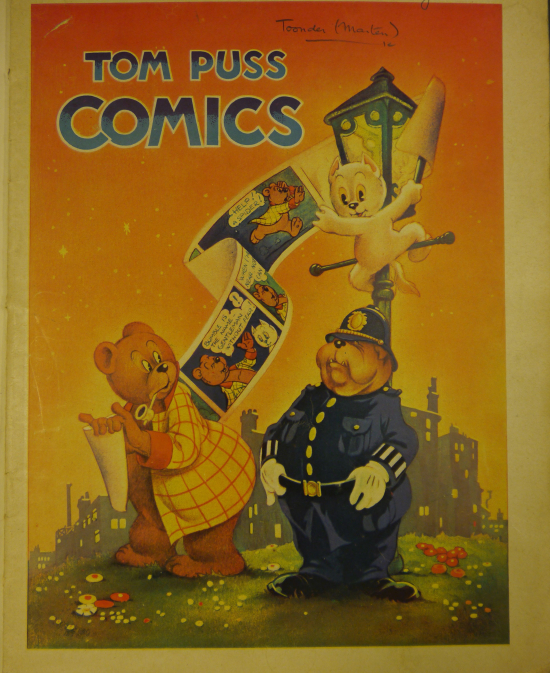 A sign of its popularity is the Toonderstripkatalogus (‘Toonder cartoon catalogue’), meticulously detailing all manifestations of the Tom Poes stories; in newspapers, in weekly magazines, in book form, in translation and in other media, accompanied by a history of Toonder and his creations. 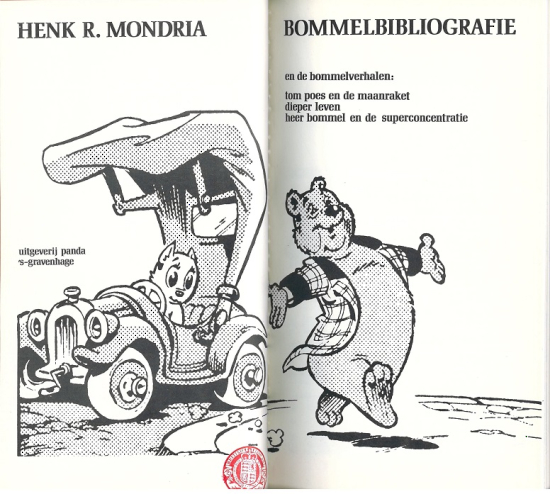 In his study of Toonder and the Bommel Saga, Henk R. Mondria discusses whether Tom Poes can be considered to be ‘Literature’. He answers in the affirmative. His arguments are that Olie B. Bommel is a rounded character, Toonder is a language virtuoso and the stories always have deeper layers than just the plot line. Furthermore, literary critics wrote polemics about this burning question, which is a sure sign of the literary value of Tom Poes.

Then, in 2008 the publisher De Bezige Bij embarked on a project of re-issuing all Tom Poes stories in a series Marten Toonder: alle verhalen van Olie B. Bommel en Tom Poes, plus commentary, in 60 volumes. The last volume was published in 2018: Als dat maar goed gaat (‘What could possibly go wrong?’). That settles the discussion once and for all; Tom Poes is well and truly part of the Dutch literary canon! 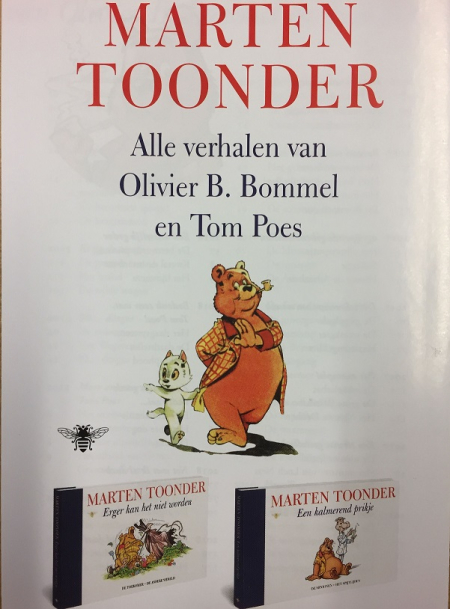