On 24 September 2018, the British Library welcomed a galaxy of leading specialists to a study day addressing the history, literature and arts of the French Caribbean and its diaspora.

The day kicked off with a comparative overview of Francophone and Anglophone Caribbean colonisation and post-war migrations by keynote speaker Professor H. Adlai Murdoch. French colonisation of the Caribbean was such that by the late 18th century Haiti, an island of 600,000 slaves, produced 60% of the world’s coffee. Despite the abolition of slavery, France retained political power over les Antilles and the legacies of colonisation remain to this day. In 1946 the islands of Martinique and Guadeloupe were given the status of départements, i.e. officially part of France. However, when Martiniquans and Guadeloupeans were invited to join the French workforce in the 1960s, they were met with racial prejudice and unfairly treated as immigrants, when they were only moving from the periphery to the centre of their own country. (A finalized version of Professor Murdoch’s presentation is available on the website of the French Studies Library Group).

The morning panel focused on history, heritage and migration. Sophie Fuggle spoke about the legacy of the ‘bagne’ (penal colonies) in French Guiana and ‘dark tourism’, and Antonia Wimbush discussed the French Caribbean’s contribution to the Second World War, events that are left out of official French narratives. Emily Zobel Marshall, the granddaughter of writer Joseph Zobel, movingly read excerpts from letters he wrote to his wife describing his experience as a Martiniquan in Paris in 1946.

Beth Cooper closed the morning’s proceedings with a presentation of the British Library’s exhibition ‘Windrush: Songs in a Strange Land’. 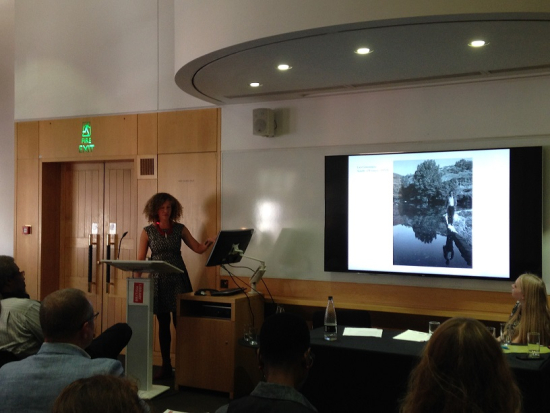 The afternoon opened with a panel on Francophone Caribbean literature. Jason Allen-Paisant gave a presentation on French Caribbean theatre and showed us a fascinating video of the first production of Aimé Césaire’s  Le roi Christophe at the Salzburg festival in 1964. Vanessa Lee talked about Suzanne Césaire’s plays, and Kathryn Batchelor looked at how Frantz Fanon’s classic The Wretched of the Earth was disseminated worldwide: the English translation was written in much more accessible language than the original French, which explains its impact in the Anglophone world. 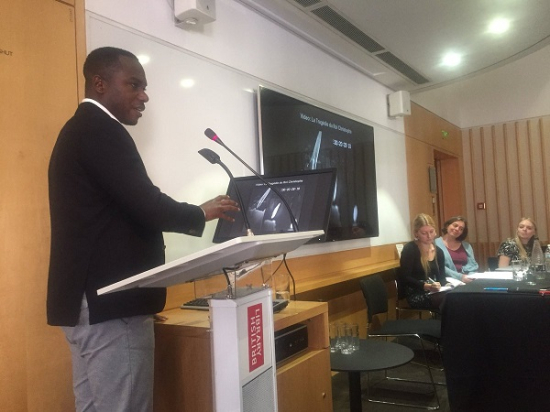 The state agency in charge of organizing the migration flows from the Antilles to France between 1963 and 1981 was the BUMIDOM (Bureau pour le développement des migrations dans les départements d'outre-mer). Jessica Oublié and Marie-Ange Rousseau, the author and illustrator of the graphic novel Peyi an nou, told us about their research into the small histories of families who came to France. The book originated in Jessica’s desire to record her terminally ill grandfather’s life for a family scrapbook. It rapidly became clear to her that the story of his move to Paris was about much more than one individual, and reflected the destinies of a wider community. The graphic novel thus shows the author’s research process using archives and interviews, “pour relier petite histoire et grande Histoire” (to connect the story with History).

The event concluded with a presentation from Jean-François Manicom on curation and visual arts in the French Caribbean. 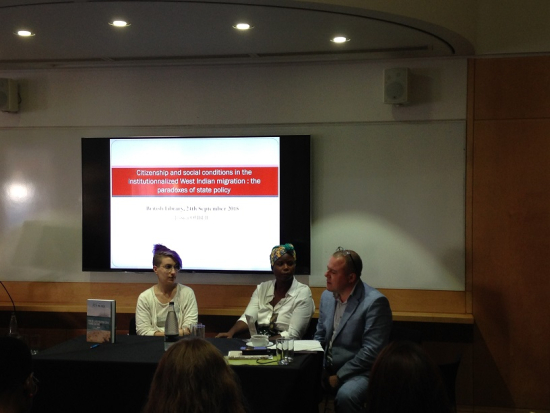 The study day was rounded off by an evening with Canadian-Haitian writer Dany Laferrière at the Institut français focusing on his book The Enigma of the Return. He reluctantly but jokingly read an excerpt he was not proud of, and talked about his election to the Académie française. Describing Québecois as humble and Haitians as “megalomaniac”, he affirmed that the award was both “beyond him” and “simply not enough”. He is, after all, in his own words, “le plus modeste poète du monde” (the most modest poet in the world).

The study day was organised by Professor Charles Forsdick (University of Liverpool/AHRC) and Teresa Vernon (British Library). in partnership with the AHRC ‘Translating Cultures’ theme, the Eccles Centre for American Studies at the British Library and the Institut français.

Laura Gallon was a PhD placement student at the British Library where she worked on a project assessing holdings of migrant narratives in the North American collections. She is in the second year of her PhD at the University of Sussex looking at contemporary American short fiction by immigrant women writers.