The Cats’ Newspaper: or the Cat’s Pyjamas?

A month after our current exhibition Cats on the Page opened, its lead curator passed me a donation of a number of issues of De Poezenkrant, or ‘The Cats’ Newspaper’, that came with a letter from its editor, P. Schreuders, who donated the issues as a ‘Thank You’ for the exhibition. These are currently being catalogued and shelfmarked and will be available on our CATalogue ‘Explore’  soon.

This blog is a ‘Thank You’ in return for Schreuders’ generous donation.

P. Schreuders started De Poezenkrant as a sort of newsletter about his family and the family cat R. van Plezier. (The ‘R’. stands for ‘Red’ as in ‘ginger’.) 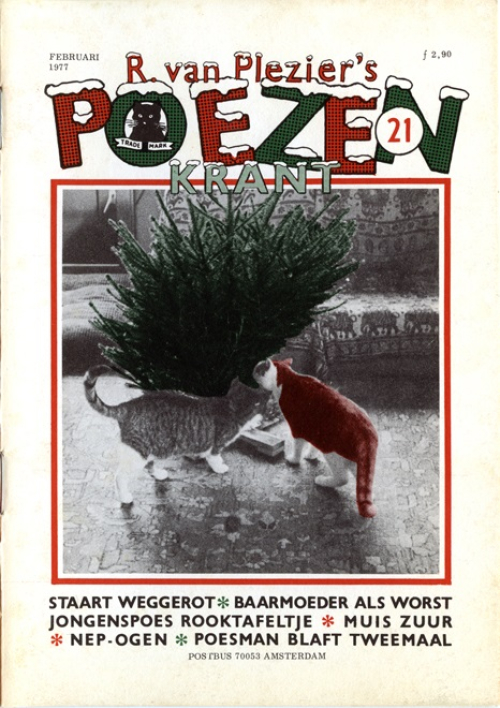 Schreuders would send the newsletter to a select group of friends, but soon the mailing list expanded to a few hundred subscribers. Now it has fans all over the world. It sure looks like it has nine lives! 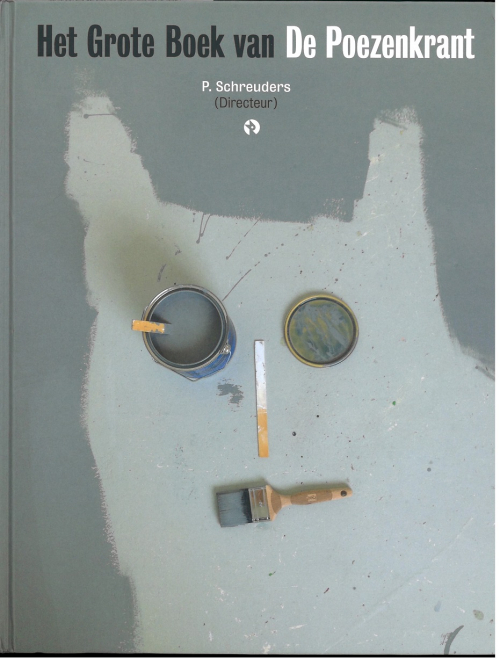 The Cat’s Newspaper is a strange little beast. Is it a magazine, or a newspaper? Is it about cats, or literature? How often does it appear and what will the next issue look like?

Mr. P. Schreuders likes to play a game of cat and mouse with his readers. De Poezenkrant is published irregularly and in ever-changing formats – just as a cat would behave. The cover of issue 62 is a case in point. It says ‘2017 à 2018’. 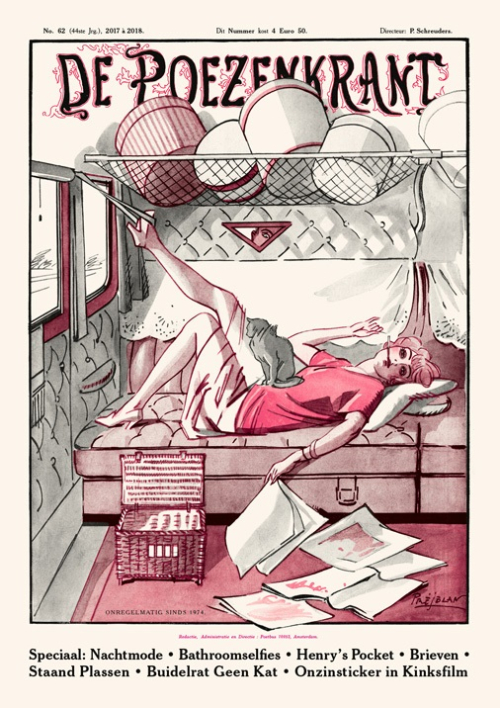 De Poezenkrant has a whiff of Facebook about it. Readers from all over the world (global reach) submit their news, photos and stories (posts) for publication in the newspaper. Well known authors write literary articles for the newspaper, which results in a hugely varied content, in Dutch, English and sometimes other languages. This stimulates endless browsing. Add to that the fact that cats are, of course, one of the most popular themes on social media and you have a social media platform.

Several Dutch authors have contributed to De Poezenkrant over time. One of the most prolific contributors, almost from the beginning, was Willem Frederik Hermans who was a big fan of cats. Schreuders read an interview with Hermans in the newspaper NRC of 20 March 1971, in which Hermans only talked about cats, so Schreuders sent Hermans the next issue of De Poezenkrant. This was the beginning of a long collaboration between the two. 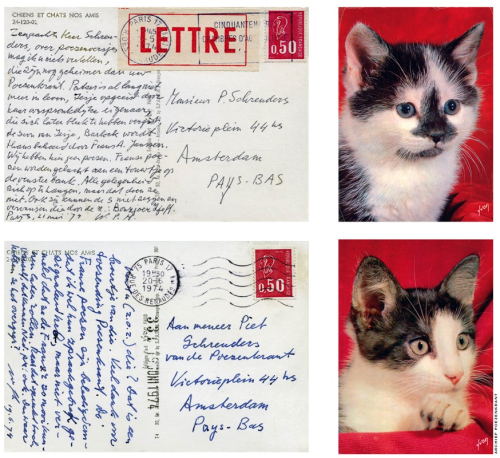 Postcards sent by W.F.Hermans to P. Schreuders in May and June 1974, commenting on De Poezenkrant, reproduced in  Het Grote Boek van de Poezenkrant

On Christmas Day 1975 Hermans sent Schreuders a copy of the famous engraving by J.J. Grandville of the characters in the fable ‘Le Chat, la Belette et le petit Lapin’, by Jean de la Fontaine, from an 1838 edition of the Fables.

Hermans included a short note, in which he states that in his opinion the image deserved a place in De Poezenkrant. He points out the clogs on the feet of the rabbit, whom he compares to a Dutch author he doesn’t like very much. He also expresses his disappointment that the carved mouse heads on the chair of the cat Raminagrobis aren’t lion heads. The note was printed in De Poezenkrant nr 24 of July 1978. 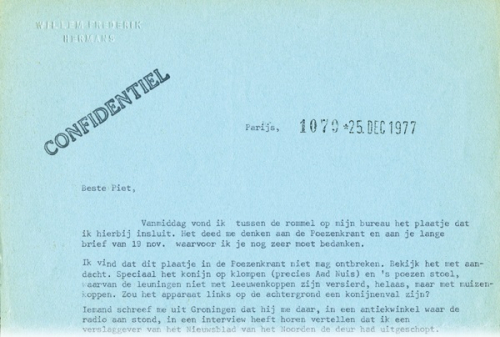 A few years later De Poezenkrant Nr 33 featured a full article on the cat Raminagrobis from La Fontaine’s fable, entitled ‘Op zoek naar Raminagrobis’ (‘In search of Raminagrobis’), in which Hermans’ copy of the Grandville engraving was included. The article discusses various editions of the fable, and their illustrations of the unreliable ‘judge’ Raminagrobis. Gustav Doré and Benjamin Rabier are mentioned, but the verdict is clear: ‘By far the most beautiful illustrations are those in the edition by Fournier Ainé (Paris, 1838) and are by Grandville’; this is indeed the edition on display in the Library’s exhibition. 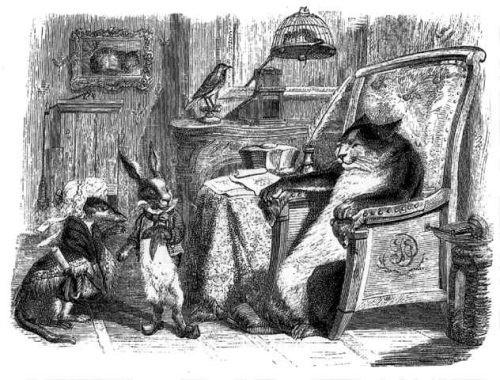 Neither the exhibition, nor De Poezenkrant would be complete without the Cheshire Cat. The cover of issue 30, Autumn 1982 is in the style of 18th-century book title pages, but with modern concepts. The Cheshire Cat sits in the centre of the page, almost like a printer’s device. It is taken from the engraving by Sir John Tenniel made for the ‘dream play for children in two acts’ (London, 1886) adapted by H. Savile Clarke from Lewis Carroll’s Alice books. De Poezenkrant has an online presence, too and several issues are available on ISSUU.

Go and have a look; curiosity won’t kill the cat!

The British Library’s free exhibition Cats on the Page and the accompanying events season continue until 17 March.