A Cat may Counsel a King: the Colourful World of Czech Cats

Appropriately for a culture famous in later years for its lively animated films, talking animals were not slow to make themselves heard in Czech. Indeed, one of the first cats to find a voice expresses itself in that very language – in Smil Flaška’s Nová rada, written in the late 14th century. In this allegorical poem, the young king (the lion of Bohemia, symbolizing Václav IV), summons a ‘new council’ of birds and beasts to advise him how best to rule. Each of them offers advice appropriate to its natural qualities, including a wily and subtle cat who suggests that every king requires a cunning spy capable of seeing by night and keeping a watchful eye out for the criminals and murderers who perform their nefarious deeds under the cover of darkness – and who could be better suited to this important role than the cat? 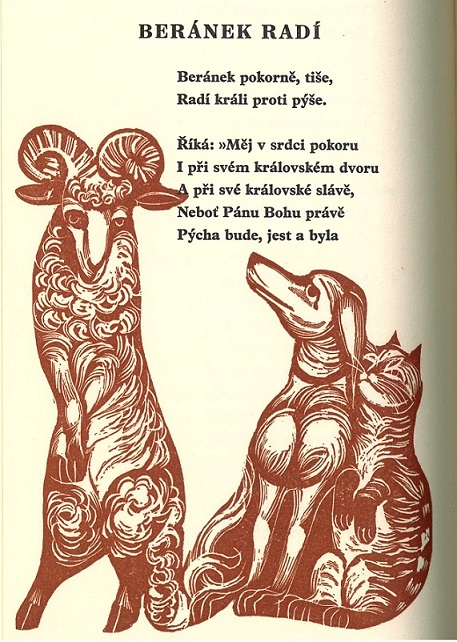 Although this urbane courtier is a native Bohemian cat, many of the most appealing and characterful examples in the long tradition of Czech illustration were created to accompany works by foreign authors. Among these, one of the most delightful is a very French cat depicted by František Tichý on the frontispiece of a Czech translation of Marcel Aymé’s Les Contes du chat perché, draped over the branch of an apple tree with a languid and knowing air. 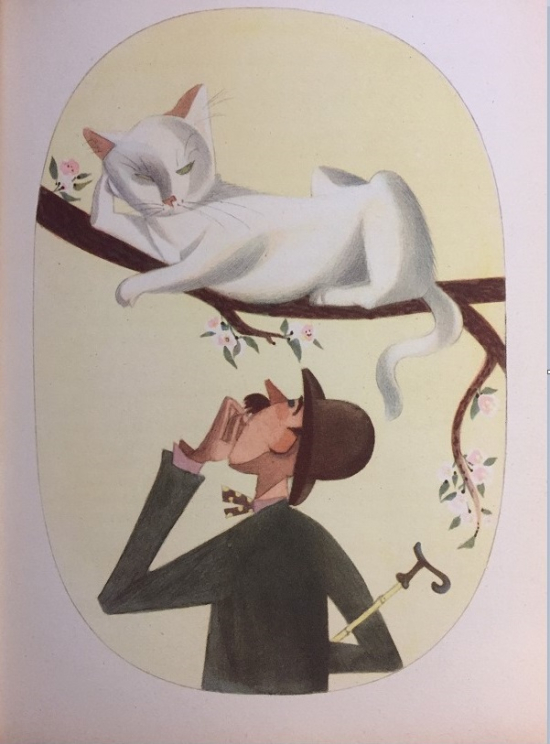 A few years earlier, Marie Majerová had published Veselá kniha zviřátek (‘The Jolly Book of Animals’), a collection of children’s stories based on English material. However, the cats depicted by Josef Lada, famous for his illustrations to The Good Soldier Švejk, bear a decidedly Czech stamp in the scene where a small boy named Jenda, in the middle of a dull afternoon when his brother and sister are suffering from colds and disinclined to play, finds himself transported to the magical Kingdom of Cats and becomes its king. 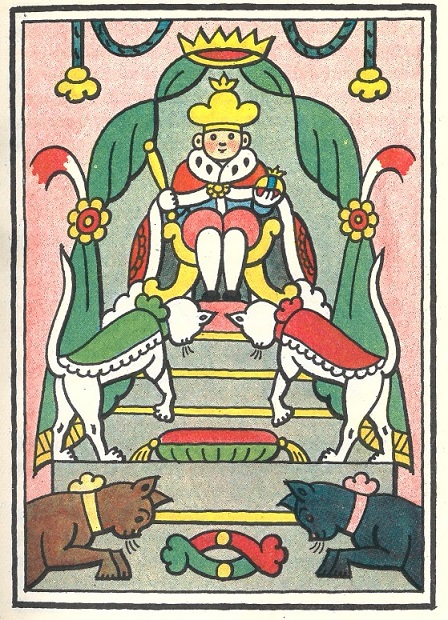 Like their English counterparts, where kittens lose their mittens and cats play fiddles and go to London to visit the Queen, Czech nursery-rhymes frequently feature cats in a starring role:

The cat took a husband,
The dog took a bride;
As groomsman our gelding
Limped at his side;
With him, as the bridesmaid,
There walked our old mare;
She gave him a nosegay
And kerchief to wear.

Lada’s illustration for Karel Jaromír Erben’s Národní říkadla (‘National Nursery-Rhymes’) shows a demure white cat in wreath and veil stepping out on her bridegroom’s arm while the farm animals look on in admiration. In another picture, while their father and mother tuck into bowls of porridge and peas on top of the stove, three kittens sit in a row beneath them wearing their best bows and expressions of marked annoyance at being given nothing to eat. With a few skilful strokes Lada captures their disgruntled air as adroitly as he does the dumb insolence of Švejk and the unmistakably Czech features of the peasants who people his almanacs. 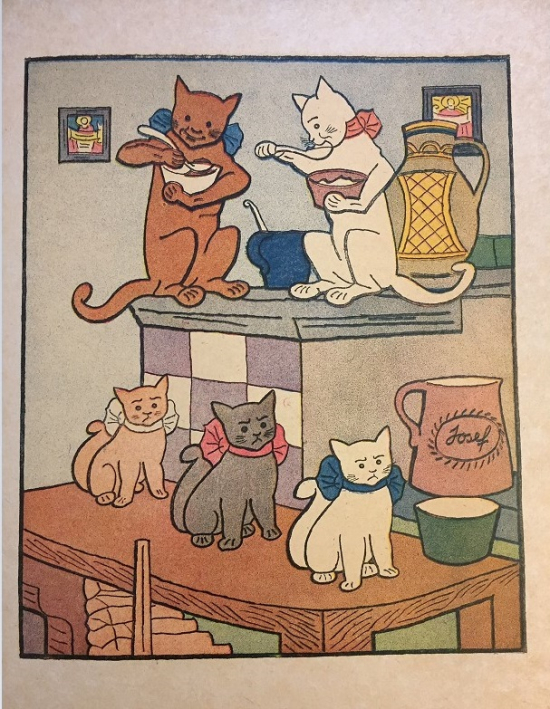 Dressed in bridal finery, advising the king of beasts or conferring royal honours on their newly-crowned human sovereign, all these cats are creatures of the imagination with very human features. One of the most charming portrayals of a cat in modern Czech literature, however, is taken directly from life. To English-speaking readers Karel Čapek may be most familiar as the creator of robots in his play R.U.R., but he was also a keen gardener and a great animal-lover (like another famous Czech author, Bohumil Hrabal, whose country home was a haven for cats). In his 1932 collection Devatero Pohádek a ještě jedna od Josefa Čapka jako přívažek (‘Nine Fairy Tales: And One More Thrown in for Good Measure’; 5th ed. 1946 at X.990/4608), he too conjures up a world in which cats enjoy adventures equal to any of those previously described.

It is in a later work, though, that Čapek reveals his true understanding of animals – Měl jsem psa a kočku (Prague, 1939; YF.2005.a.31524). Like the earlier book, it was translated into English within a short time by Robert and Marie Weatherall and became popular among British readers because of its dry, understated humour and affectionate depiction of the author’s pets. Like E. T. A. Hoffmann, the creator of Kater Murr, and his wife, Karel and Olga Čapek were childless, and it is tempting to assume that for them too animals represented surrogate children. Yet there is nothing mawkish about the ironic amusement with which Čapek describes the behaviour of his dog and cat, to which he brings the same detached, quizzical approach that he applies to the English, the Spanish or the Dutch in his various travel writings. Whether chronicling the wooing of his pet by caterwauling tomcats or the antics of the resulting litter of kittens, Čapek’s light and laconic style is perfectly partnered by that of his brother Josef’s drawings. 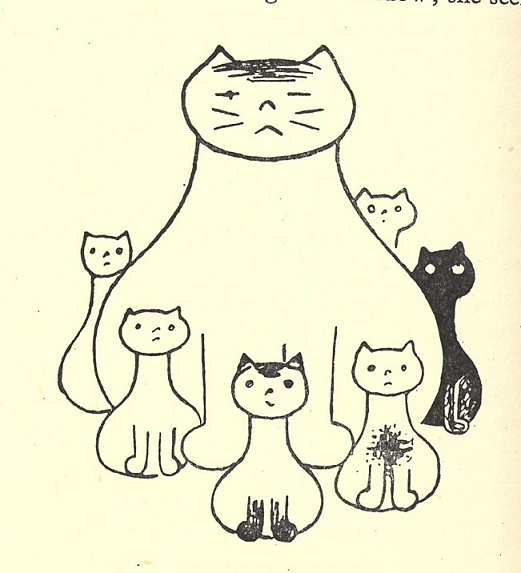 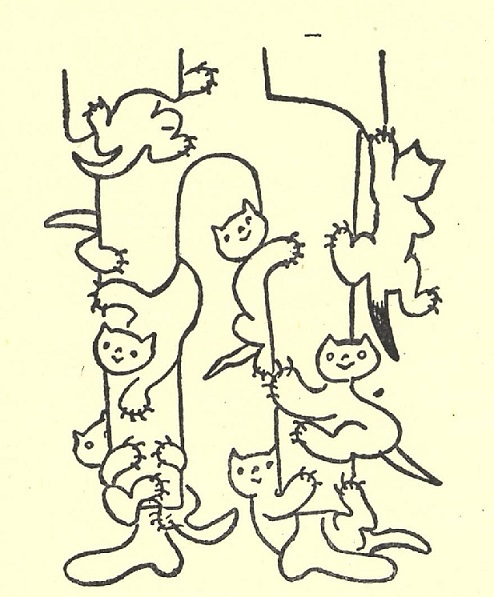 For all their baffling and sometimes maddening idiosyncrasies, it is clear that for Čapek his feline friends were the cat’s whiskers – and who are we to disagree?